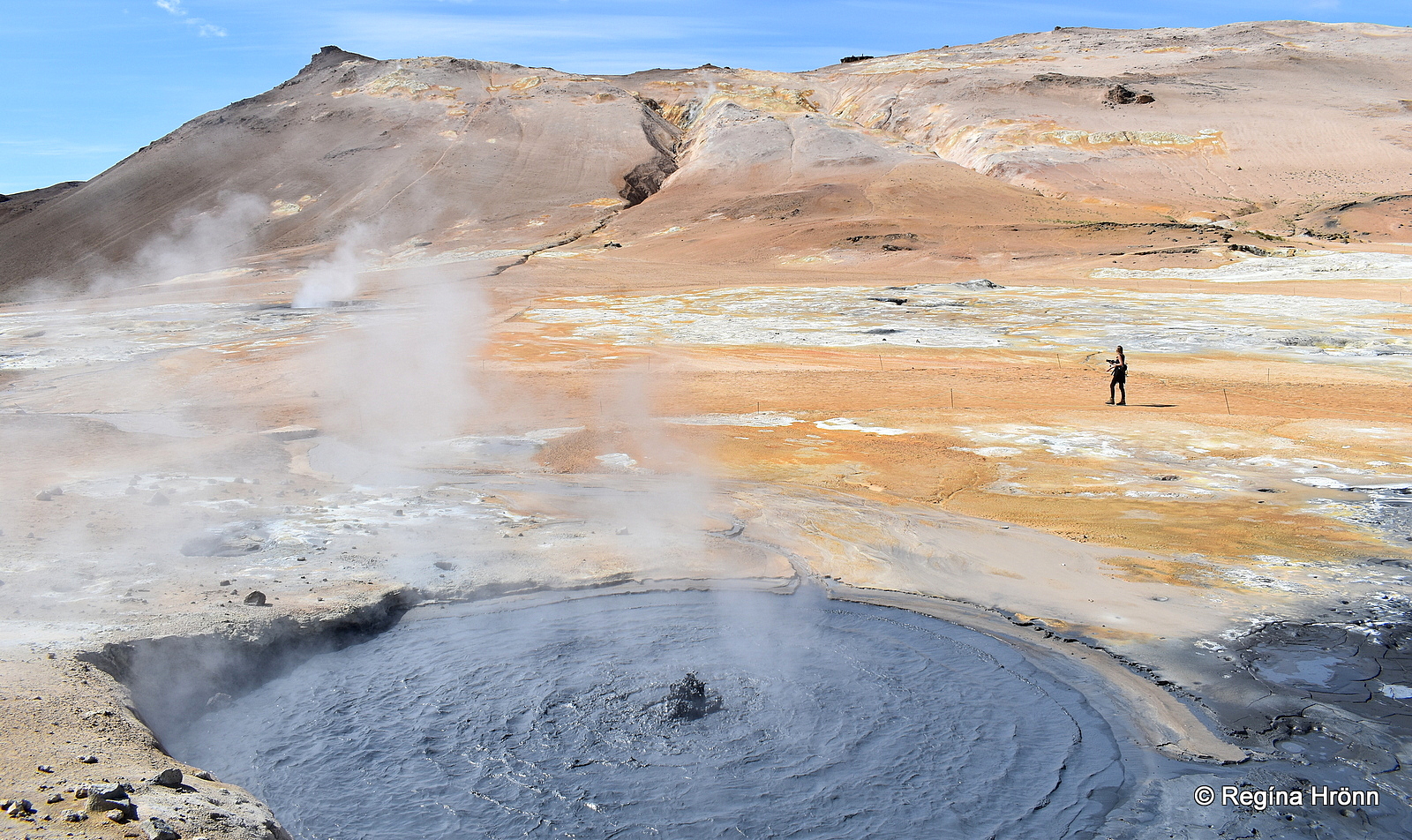 In my last travel-blog I showed you the many pearls of nature in the Mývatn area, which is often called the Northern Lights Capital of Iceland.

Now let’s drive approximately 5 km from Mývatn on ring-road 1 through Námaskarð pass and stop by Mt. Námafjall and the Hverir geothermal area. Here you will notice some dramatic changes in the landscape.

We have now left the vegetated Mývatn area with its rich aquatic birdlife behind and entered the barren, yet very colorful Krafla area. 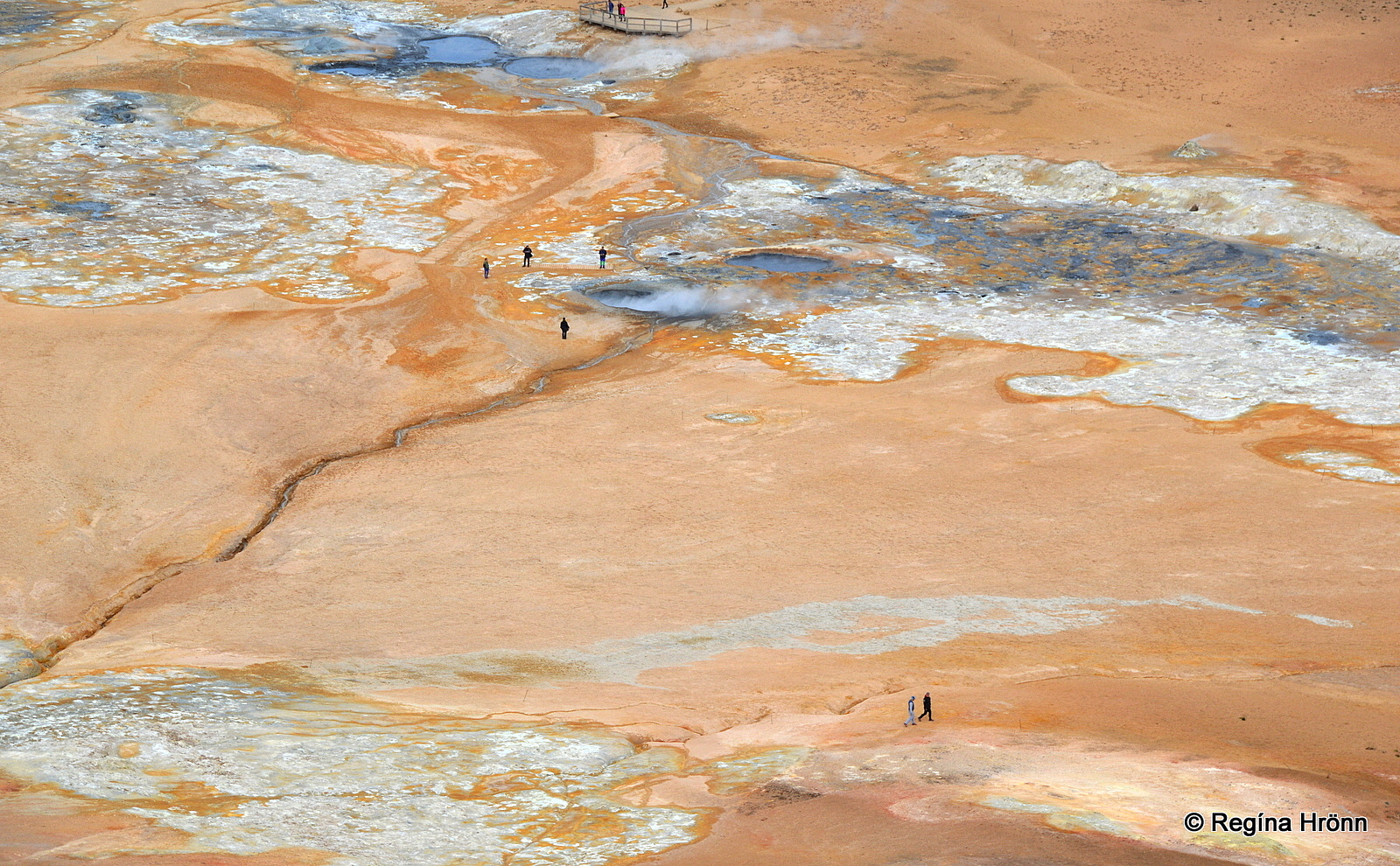 Right by ring-road 1 after we pass Námaskarð we see the colorful geothermal area Hverir. This is one of the most accessible geothermal areas in Iceland.

Hverir is the Icelandic word for hot springs, so this area is simply called the Hot spring geothermal area. A little east of Hverir is Hverarönd or Hot Spring Strip.

Prominent in this area is the orange-colored rhyolite mountain Námafjall (482 m.a.s.l.) by Námaskarð pass. 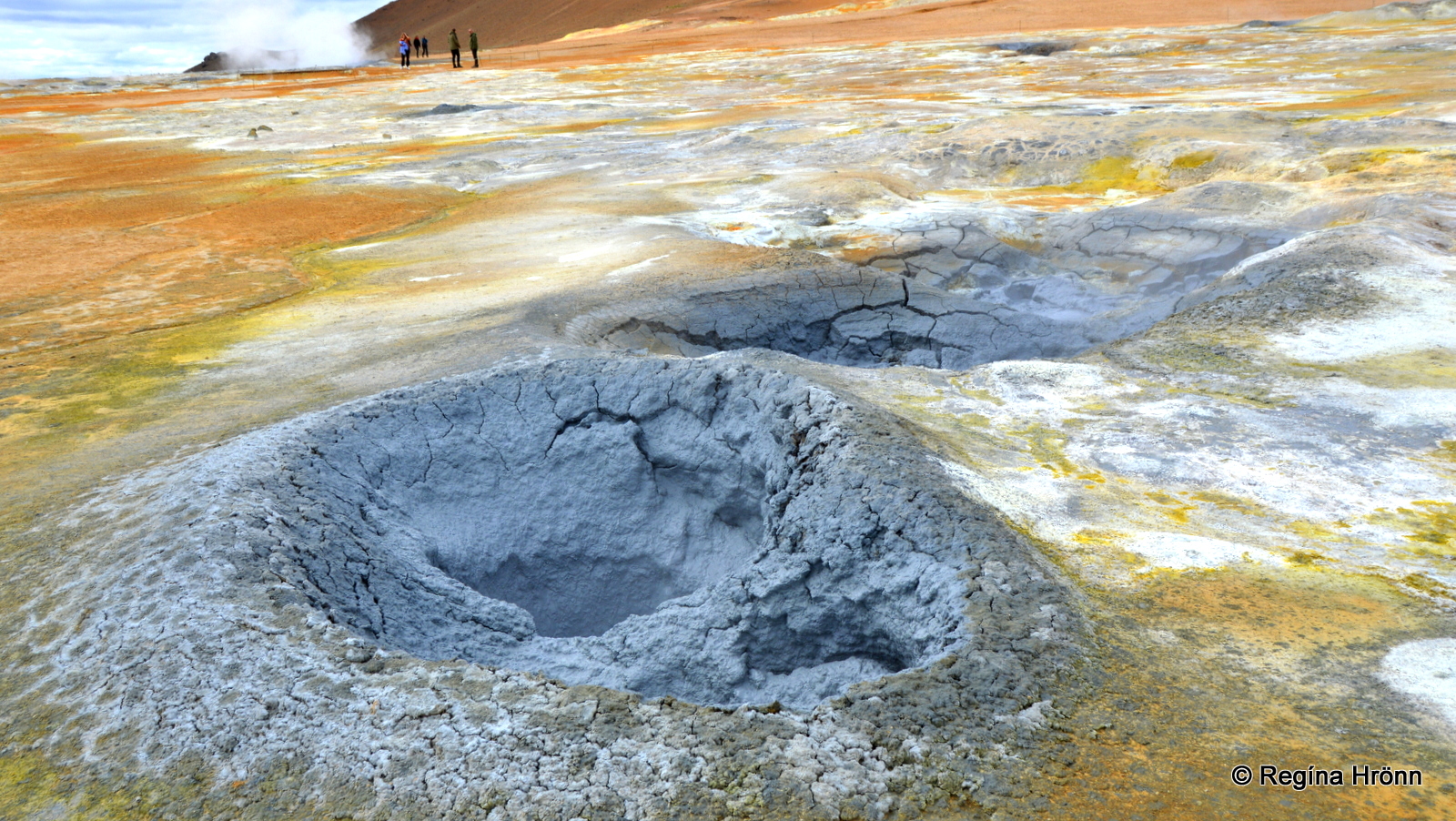 The whole area is very colorful, and here you will see yellow, orange, pink, white, and grey colors in abundance.

The dominant yellow color is sulfur deposits and in the olden times, sulfur from Mt. Námafjall was mined and exported for the use of gunpowder.

When you enter the geothermal area, you will immediately notice the strong smell of sulfur in the air. Stay upwind of the fumes as they can be harmful.

This area has been nicknamed “eldhús djöfulsins” or Hell’s Kitchen and you will understand why, when you stand in the middle of the geothermal area surrounded by steaming and boiling hot pots and steam vents, with the overwhelming smell of sulfur filling the air 😉

One of the old hissing boreholes at Hverir

The hissing pile of rock in my photos is an old borehole. The rocks on top of it were later added to it by some travelers (Orkustofnun).

The rocks change in color and every time I visit this area they look different from the year before. 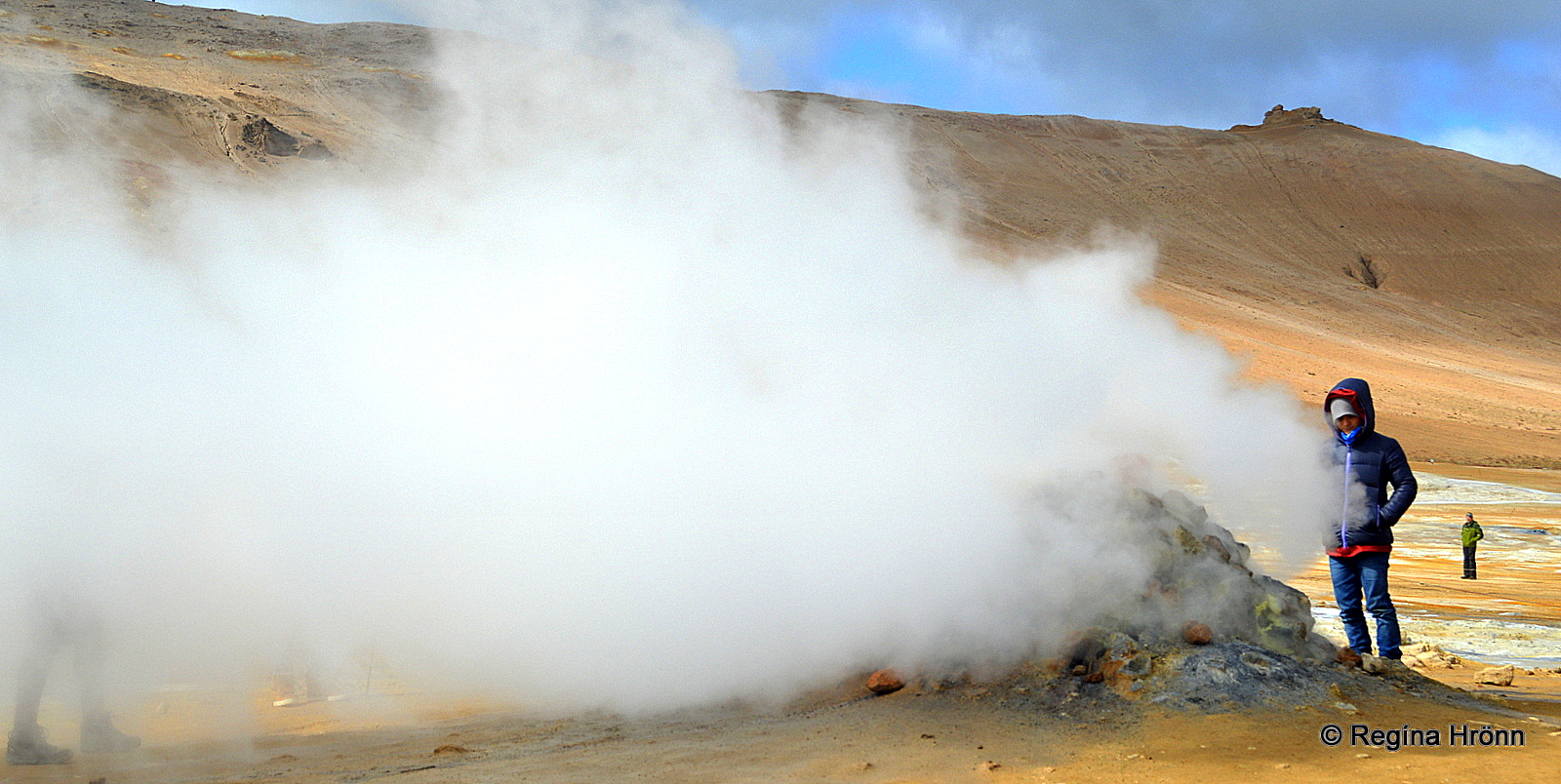 Can you see the person to the left in the massive steam?

There are at least 11 old boreholes in this area, but 2 of them will catch your attention as they are very loud.

The steam coming from them is so massive that if you are standing on the other side of the borehole you will disappear.

In my video below my husband disappears for a moment when walking around the borehole. It is very popular to take such videos here at Hverir 🙂

A hissing borehole at Hverir

A 2.5 km hike on Mt. Námafjall will lead you via a somewhat steep trail up the mountain, but once on top, you will be rewarded with a fantastic view of the geothermal area below.

And on the other side of the mountain, you will have a view of the Mývatn area.

This is one of the most extraordinary hikes I have done, as everywhere around me I could see strange colorful formations and steam coming from the ground.

Now, let’s take a detour from ring-road 1 and drive a short distance on road 863 up to Stóra-Víti explosion crater. 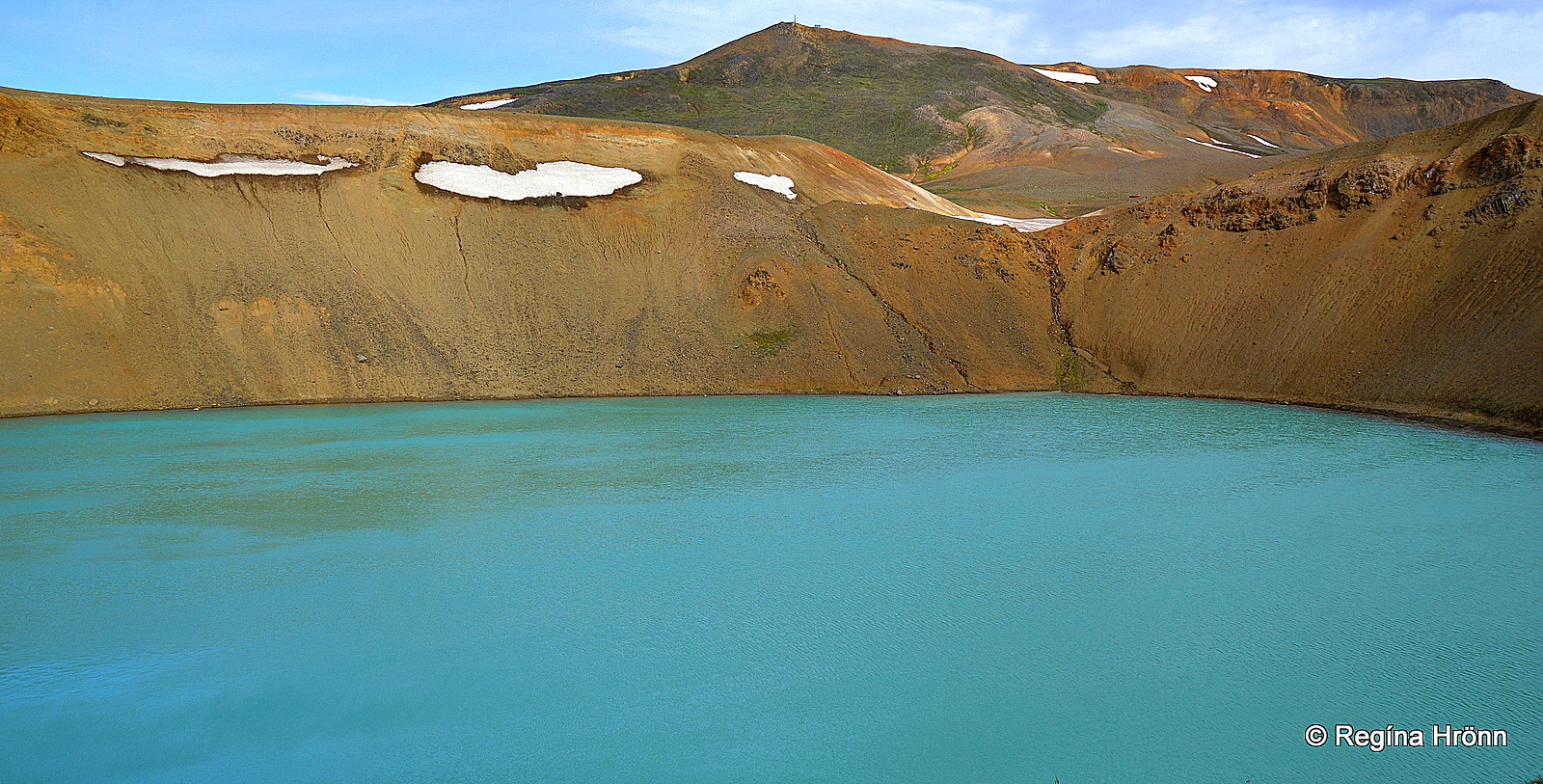 Stóra-Víti explosion crater is filled with a beautiful blue lake

Krafla central volcano sits on the border of the North Atlantic and Eurasian tectonic plates, and Mt. Námafjall, Gjástykki, and the Krafla area are all part of the same central volcano.

The road leads us straight up to the explosion crater Stóra-Víti or Big Hell.

There are several craters in Iceland called Víti or Hell, as in the olden times there was a common belief that Hell could be found beneath volcanoes.

There is another well-known Víti – Hell by Askja in the highland. People bathe in that one as it is filled with a 22-26 degrees C geothermal, sulfurous lake. There is no bathing in Stóra-Víti.

Stóra-Víti explosion crater, which is filled with the most beautiful blue water, was formed in 1724 in the so-called Mývatnseldar Fires, which erupted from 1724-1729.

There wasn’t always a blue lake in the crater as earlier on a massive solfatara filled the crater.

The colorful geothermal area by Stóra-Víti

Krafla erupted again in the last century when it stirred and erupted 9 times from 1975 until 1984 in massive fissure eruptions.

The earth got ripped apart by the movements of the Eurasian and North Atlantic tectonic plates, and fissures were created with red-hot molten lava welling up.

Lava fountains were spewed up to 70 meters in the air and lit up the sky.

These eruptions got the name Kröflueldar or the Krafla Fires.

The geothermal area by Stóra-Víti

The inhabitants of the Mývatn area were of course affected by the close-by eruptions and in the Mývatnseldar Fires in 1729 the lava-flow from Leirhnjúkur destroyed 3 farms at Mývatn,

Reykjahlíðakirkja church was miraculously spared from the lava flow.

If you visit Reykjahlíðarkirkja church at Mývatn, then you can see how the lava stopped by the church and went around it. The beautifully carved pulpit in the church reminds us of this miraculous event. 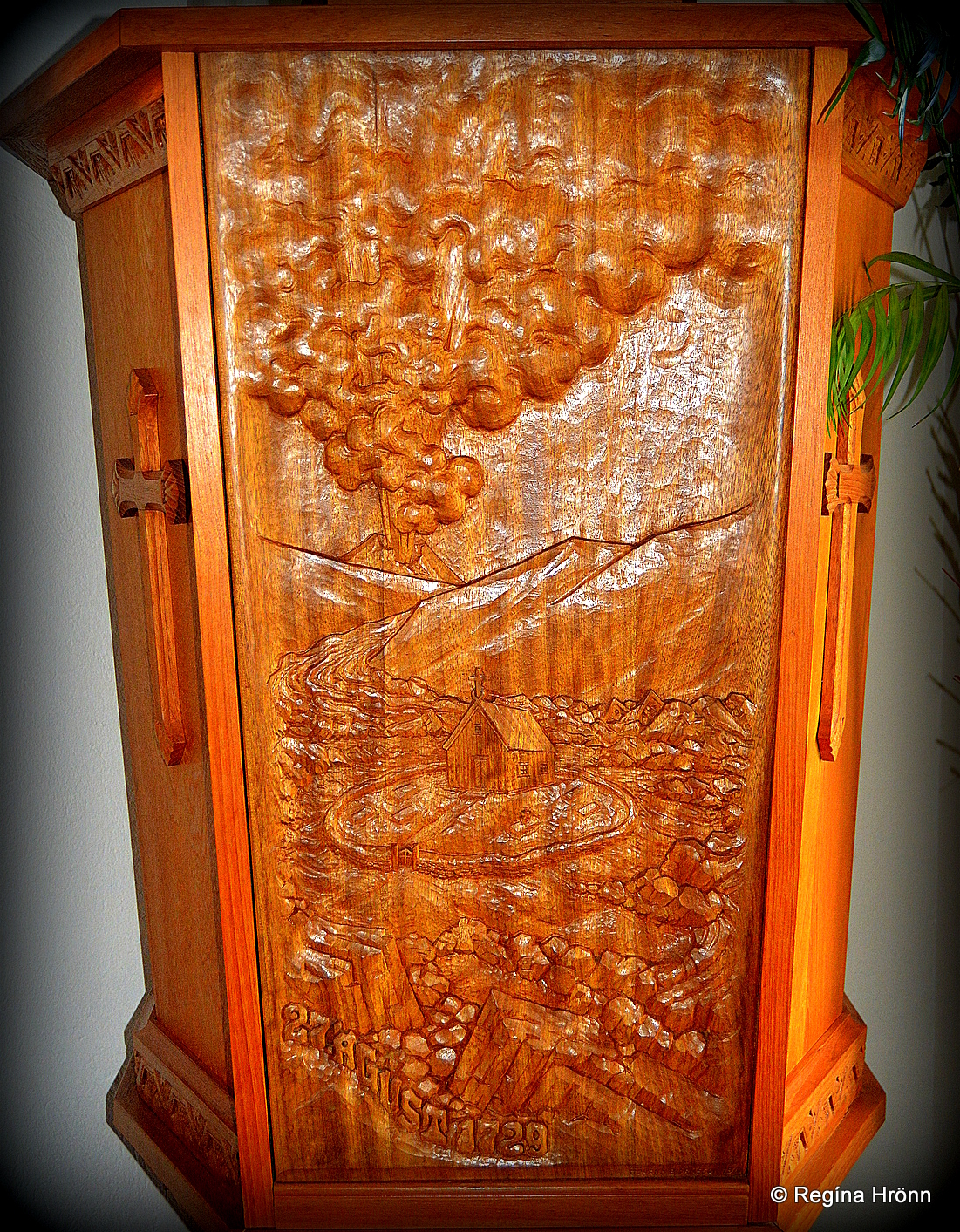 The pulpit in Reykjahlíðarkirkja church

This is not the only time that such an event took place here in Iceland, as during the massive Skaftáreldar volcanic eruption in 1783 in South-Iceland the lava flow stopped right before it reached the church.

It is a very interesting story, which you can read about in my travel-blog: The Historical Kirkjubæjarklaustur and Skaftáreldar volcanic eruption in South-Iceland 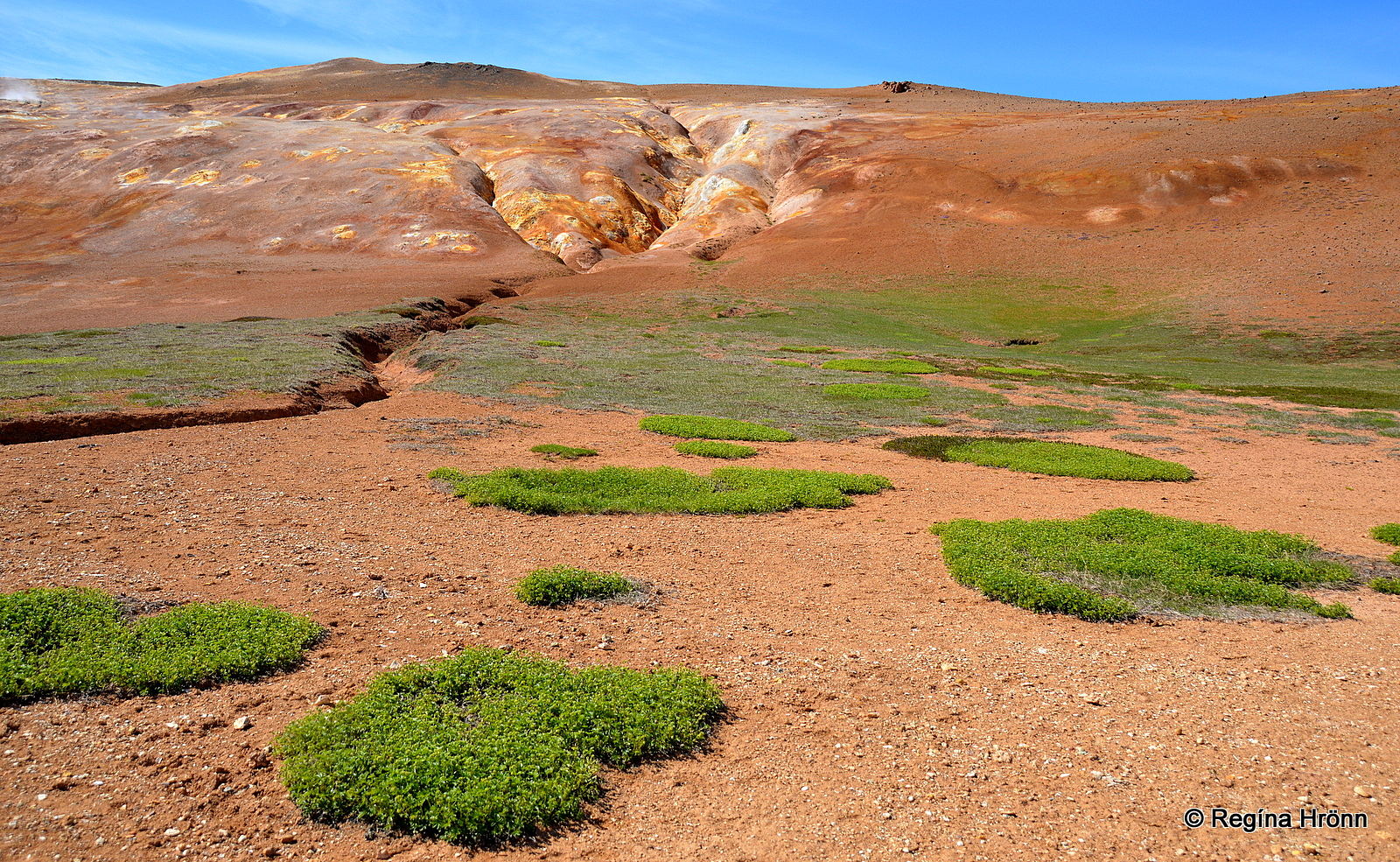 Now, let’s have a look at Leirhnjúkur, which is just a stone-throw away, so to speak, from the Stóra-Víti explosion crater.

A 10-minute walk from the parking lot for Leirhnjúkur takes you to the roots of the red clay-colored tuff mountain, which translated into English means Clay Hill. The geothermal heat has turned the rhyolite into clay in many places, thus the name.

Leirhnjúkur can be mistaken for a hill, as even though it rises 593 m.a.s.l. then we are quite high up in this area already, so the mountain only rises some 50 meters above the ground. 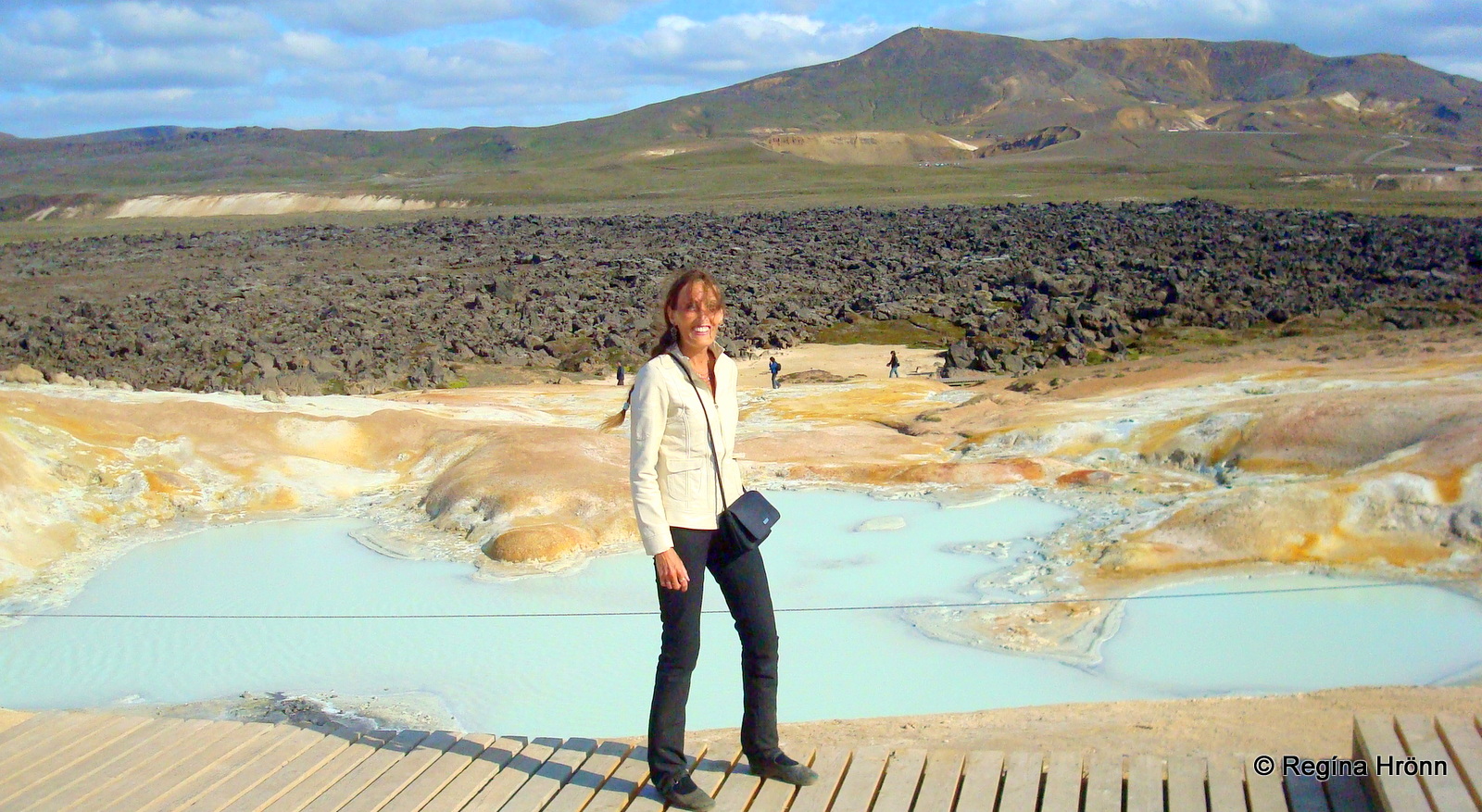 Exploring the geothermal area at Leirhnjúkur

A wooden trail to the right of the volcano will lead you through geothermal areas with brilliant colors. In my photo above you can see Stóra-Víti in the distance.

Here at Leirhnjúkur, an eruption took place in the Kröflueldar fires in 1975-1984.

The blue oblong lake at Leirhnjúkur

The shorter hike around the volcano takes an hour with many photo stops, but the longer hike takes you through the pitch-black lava field to the crater Hófur – the Hoof, which was formed in the Mývatnseldar Fires in 1724-1729.

Don’t you think that the opalescent blue oblong lake looks lovely with the contrasts of the black lava field behind it and the pink-orange lava clay which frames it?

The geothermal colors here at Leirhnjúkur are truly amazing and it feels like you have entered another world. 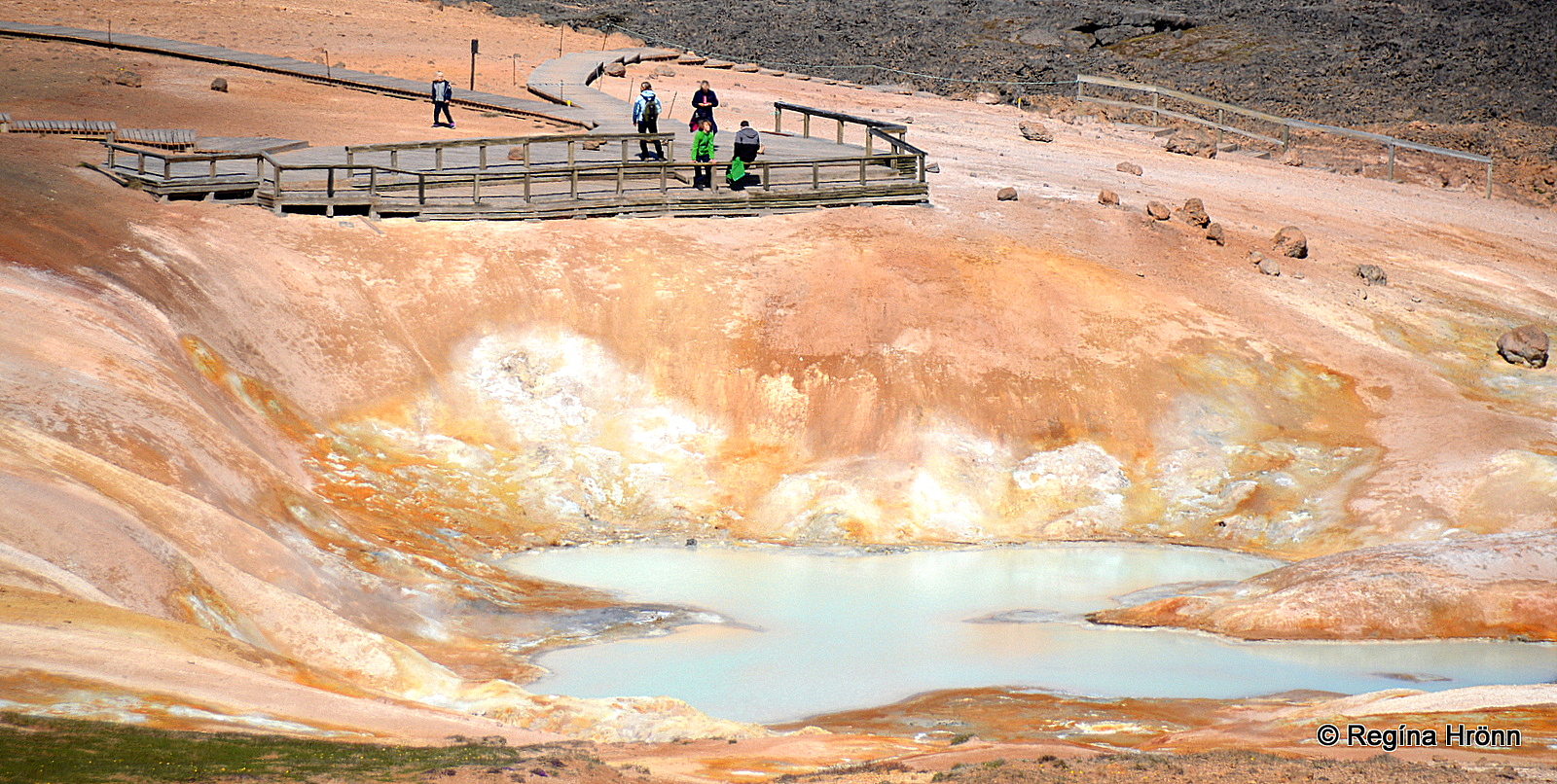 It is best to visit the geothermal areas when the sun is shining as the sunshine enhances the geothermal colors and makes them more bright and vivid.

The Hverir geothermal area is one of the stops on the popular Diamond Circle. If we continue driving further on ring-road 1 then we will reach the byroads for Jökulsárgljúfur canyon and Dettifoss waterfall, which I have showed you in other travel-blogs.

In my next travel-blog I am going to show you the last stop on the Diamond Circle, the historic Goðafoss waterfall. And then we will head for Akureyri – the Magical City of North Iceland.

Have a lovely time exploring the Krafla area 🙂