The glacial river Jökulsá á Fjöllum – the Glacial River in the Mountains, is the second-longest river in Iceland (206 km long).  It is a roaring, turbulent milky white/greyish glacial river coming straight from the Vatnajökull glacier, Iceland‘s largest glacier. 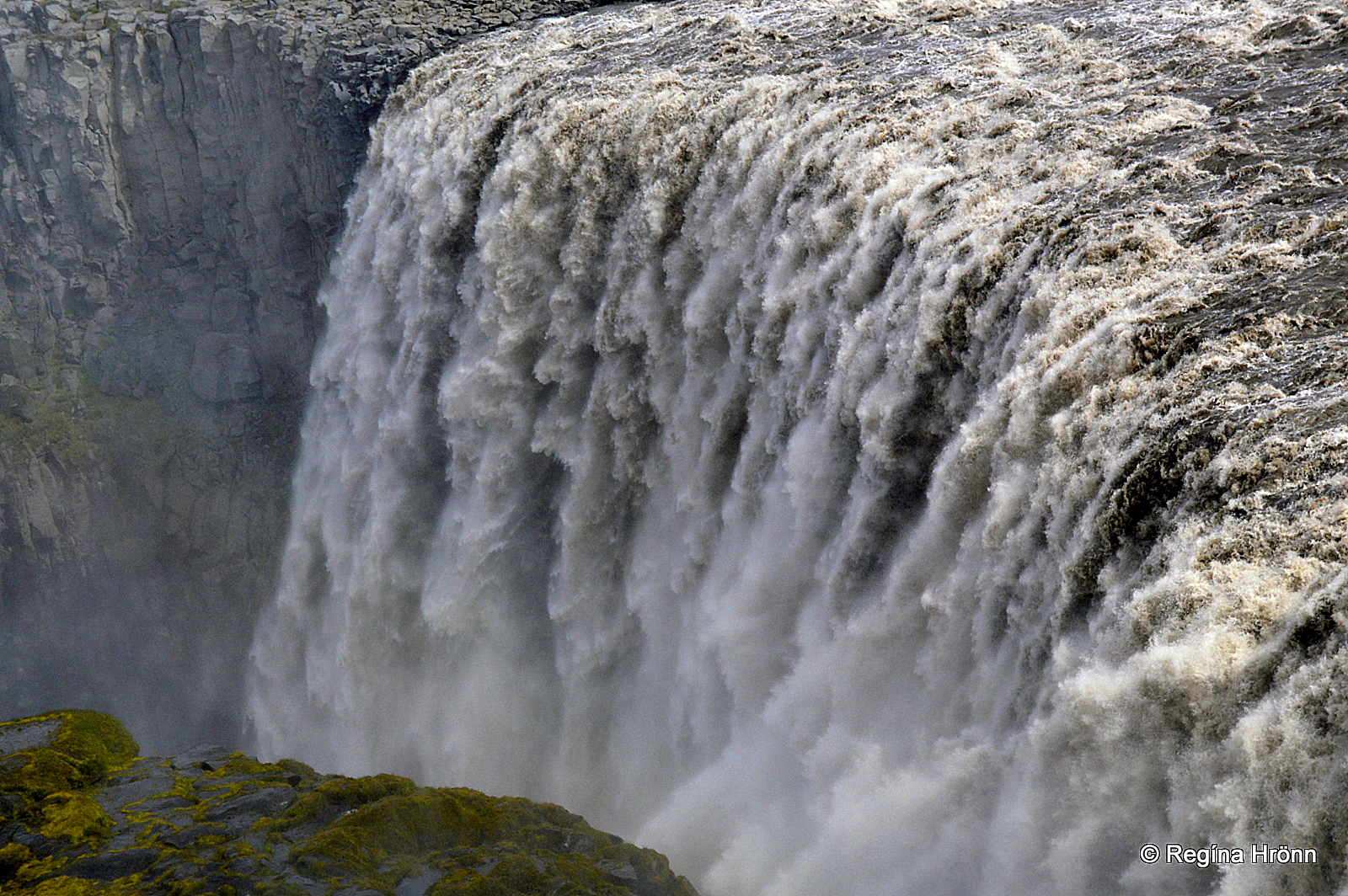 Dettifoss waterfall as seen from the west bank

Jökulsá á Fjöllum glacial river, on its way to the sea, runs through one of the biggest and most spectacular canyons in Iceland, the 25 km long Jökulsárgljúfur canyon, with its beautiful waterfalls and extraordinary rock formations.

The biggest waterfall in the glacial river is the massive Dettifoss waterfall. Dettifoss is 45 meters high and 100 meters wide and holds the record for being Iceland’s most powerful waterfall. 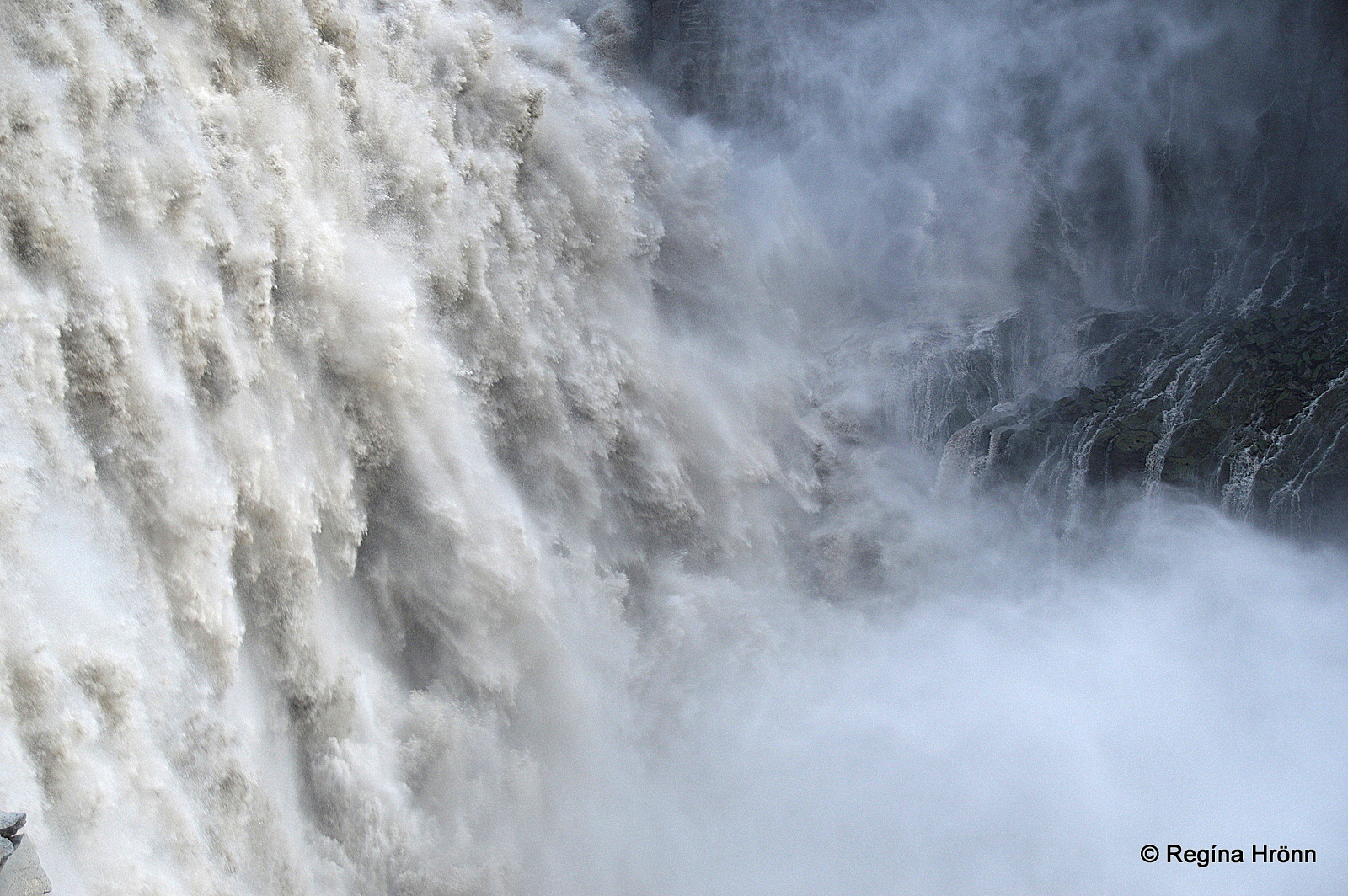 Dettifoss waterfall as seen from the east bank

Dettifoss waterfall, along with the smaller waterfalls, Selfoss and Hafragilsfoss, south and north of Dettifoss, create a natural monument and as such were declared protected back in 1996.

Dettifoss waterfall – the most powerful of Iceland’s waterfalls 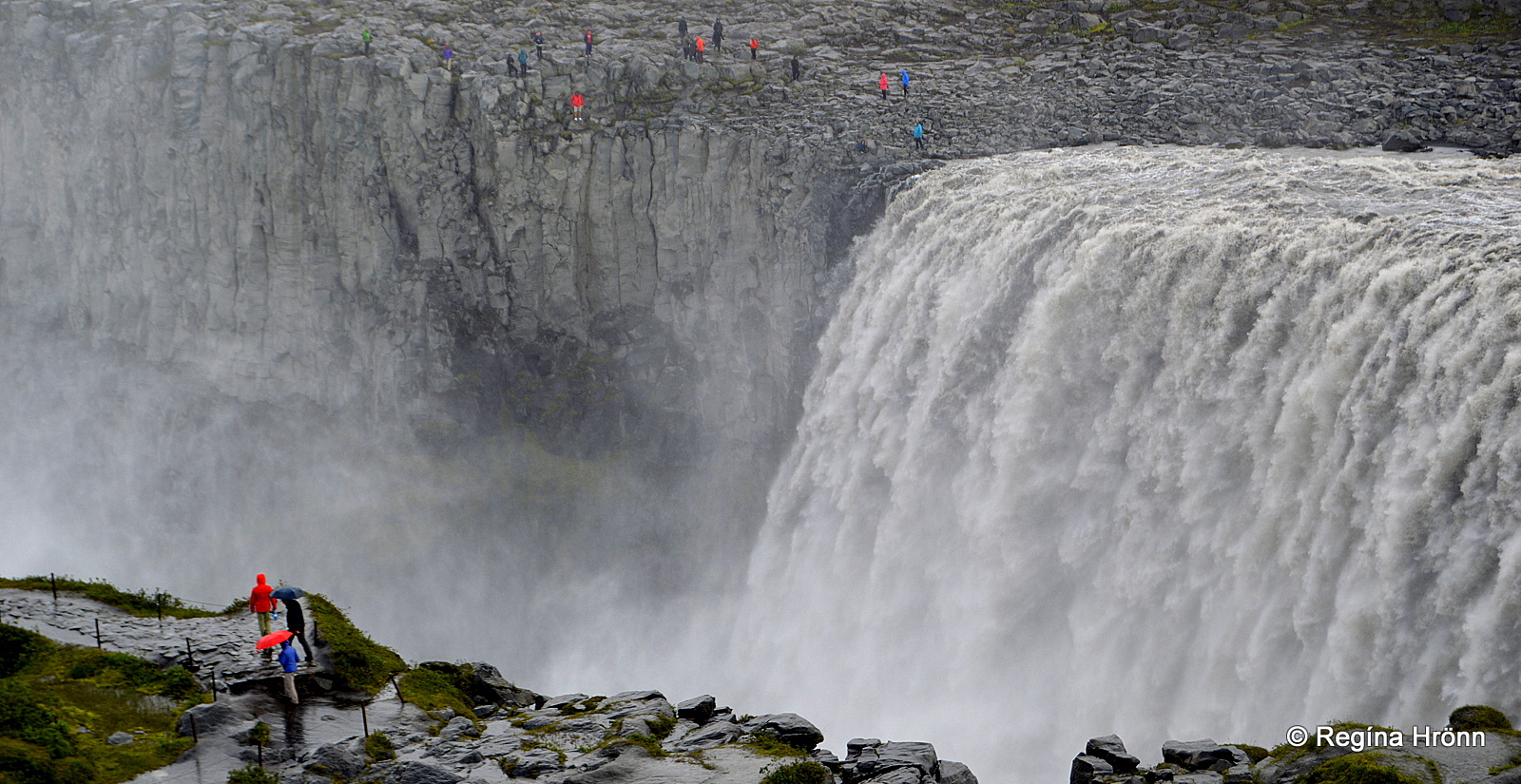 Dettifoss waterfall as seen from the west bank

Now let‘s first visit Dettifoss waterfall. Dettifoss is Iceland’s most powerful waterfall and it has got the wow factor big time.

It is unreal standing close to Dettifoss, witnessing such great forces of nature.

Dettifoss can be visited from both the east bank and the west bank of Jökulsá á Fjöllum glacial river. 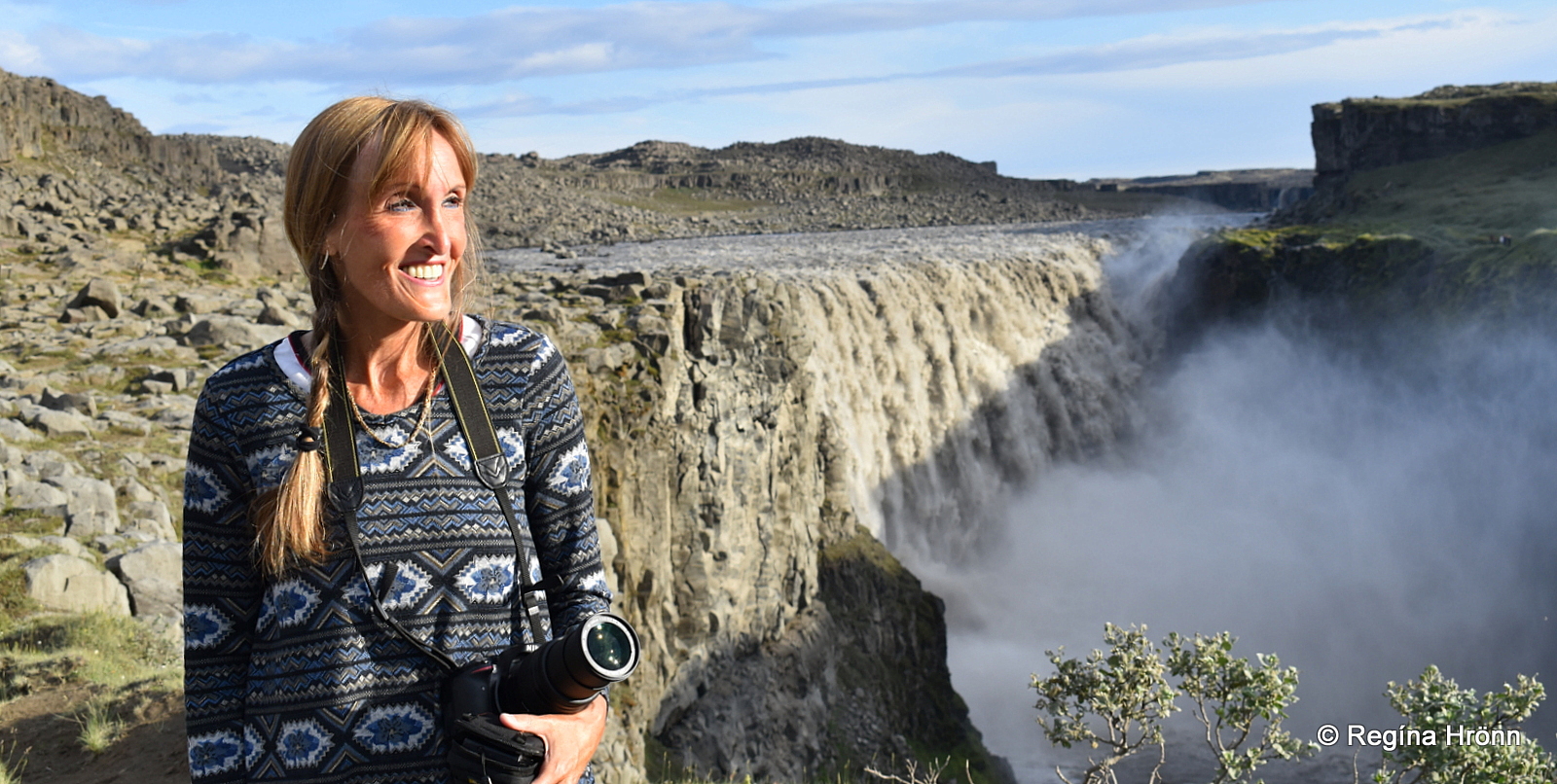 Visiting Dettifoss from the east side

The easiest way to visit Dettifoss is by turning from ring road 1 onto the paved road 862 on the west side of the canyon.

After driving for a while on road 862 you turn on road 886 and drive for a short distance until you reach a paved parking lot. An easy 10-minute walk will take you straight to Dettifoss waterfall. 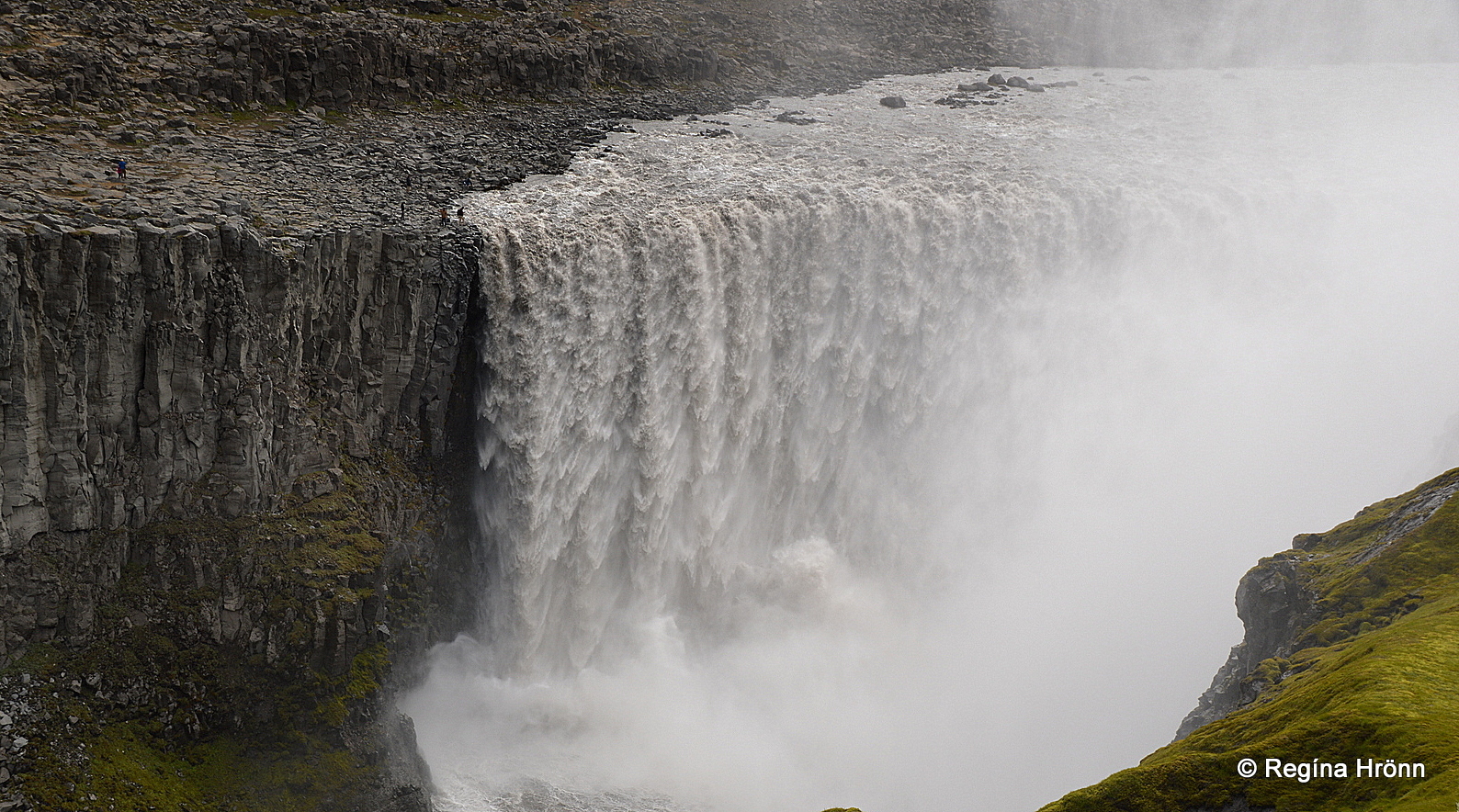 The view from the observation platform

Here you can watch the massive glacial river cascading into the Jökulsárgljúfur canyon. The river, which looks almost innocent further south turns into a thunderous monster-like waterfall and the grey color of the glacial rivers adds to its dramatic appearance.

There is a lot of mist on the west bank so one is bound to get wet when standing so close to this powerful waterfall. Bring a raincoat just in case the wind is strong and the mist will be blown your way.

New observation platforms have recently been added for a different view of Dettifoss.

When I visited the observation platform for the first time in the summer of 2020 I got drenched in the mist and had to hide my camera inside my parka.

You can see in my video above, which I took from the new observation platform how thick the mist from the waterfall is. 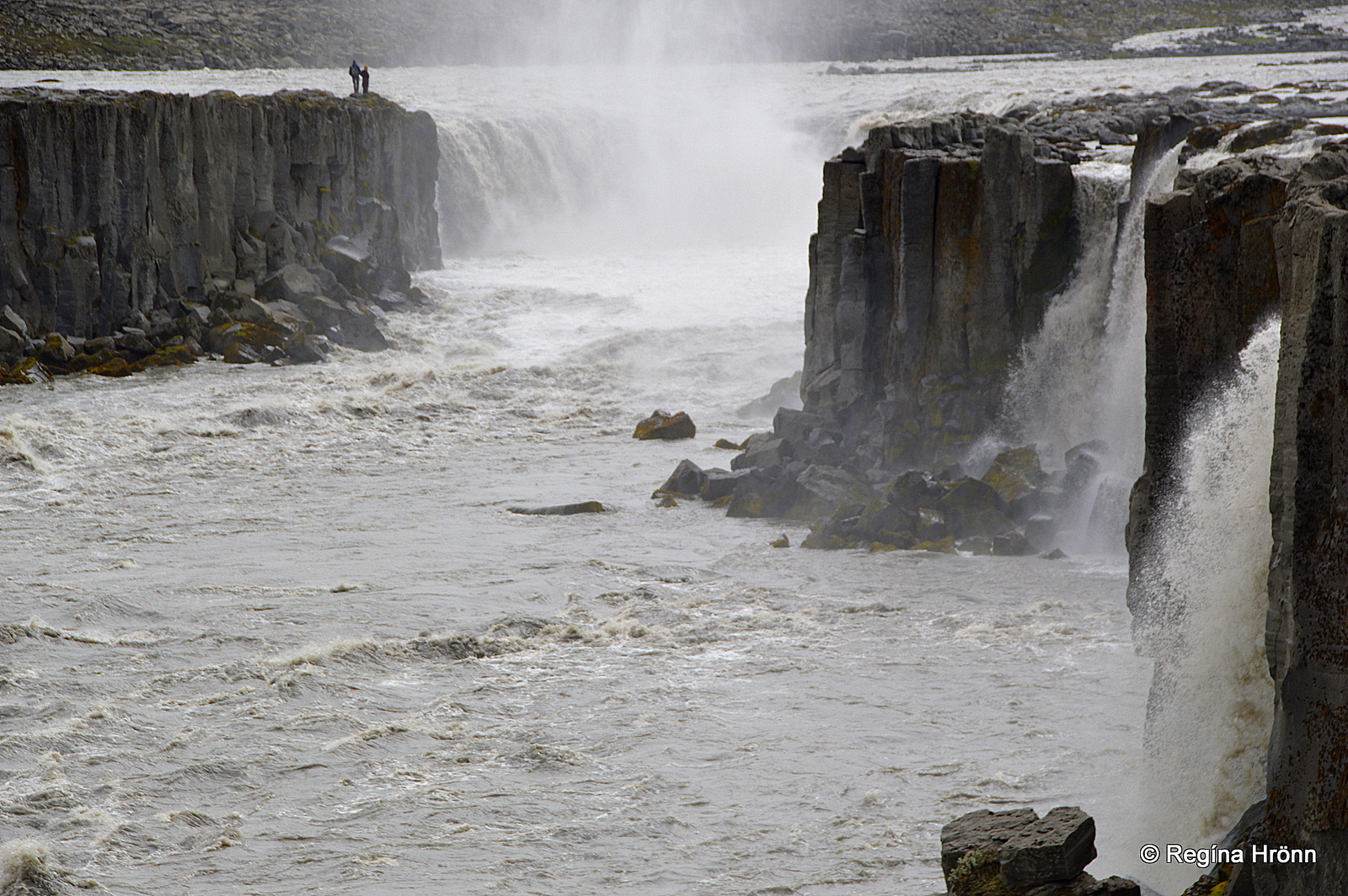 After your visit to Dettifoss, you might want to visit its smaller neighbor, Selfoss waterfall, which is just south of Dettifoss. It is a beautiful horseshoe-shaped waterfall, 10 meters high and very wide.

Here Jökulsá á Fjöllum glacial river has traveled for around 140 km from its source in the Vatnajökull glacier, which is Europe’s largest ice cap by volume.

An easy short hike (approx. 1 km from the Dettifoss trail) to Selfoss waterfall is well worth it, even though it falls in the shadow of its massive neighbor, Dettifoss. 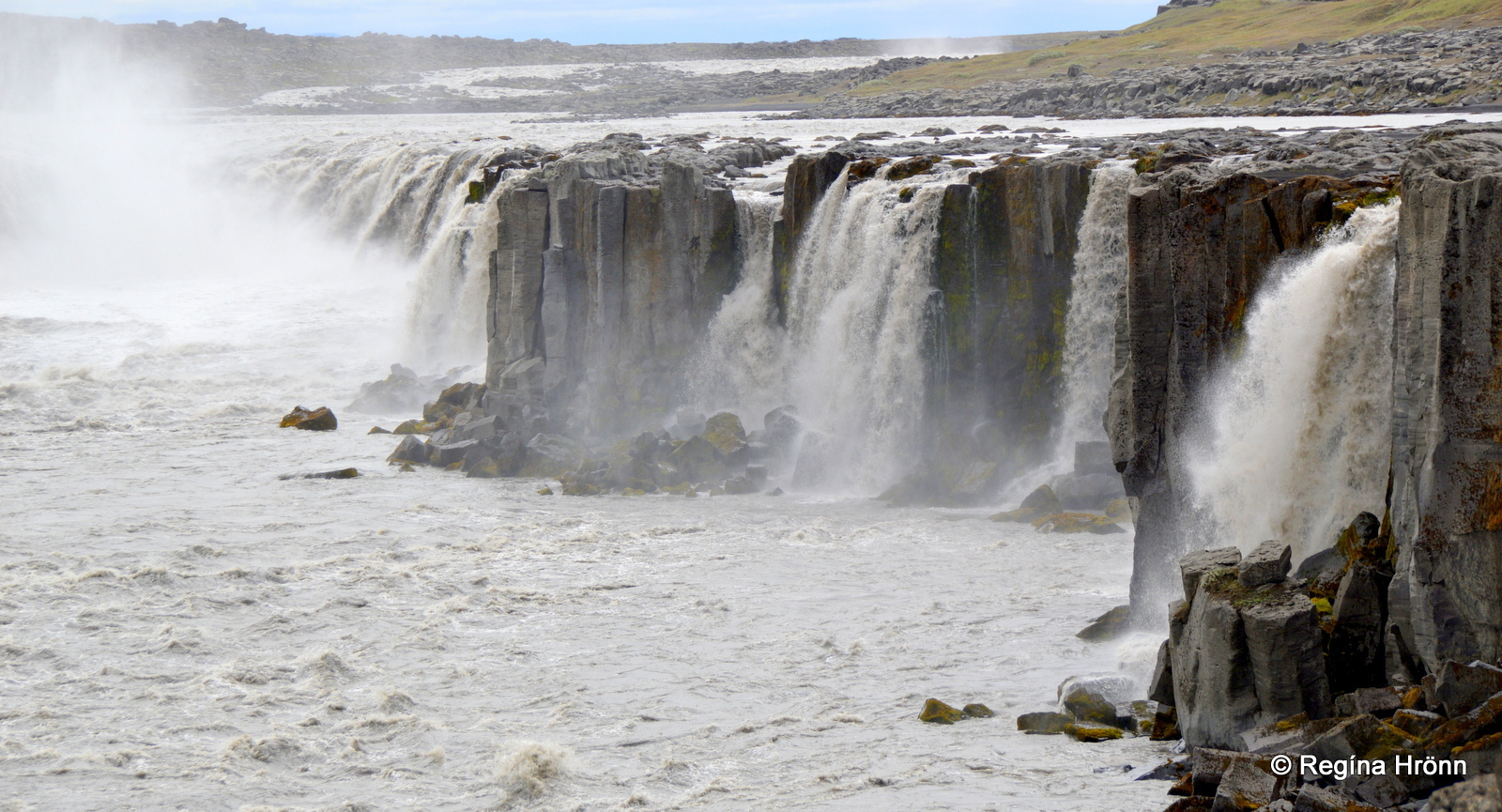 Prior to being named Selfoss, the waterfall had the name Willardfoss, named after an American professor Willard Fiske, who traveled around Iceland back in 1879.

Most people visit Dettifoss from the west bank and then drive further north towards road 85. Our next stop will be at Hafragilsfoss waterfall. 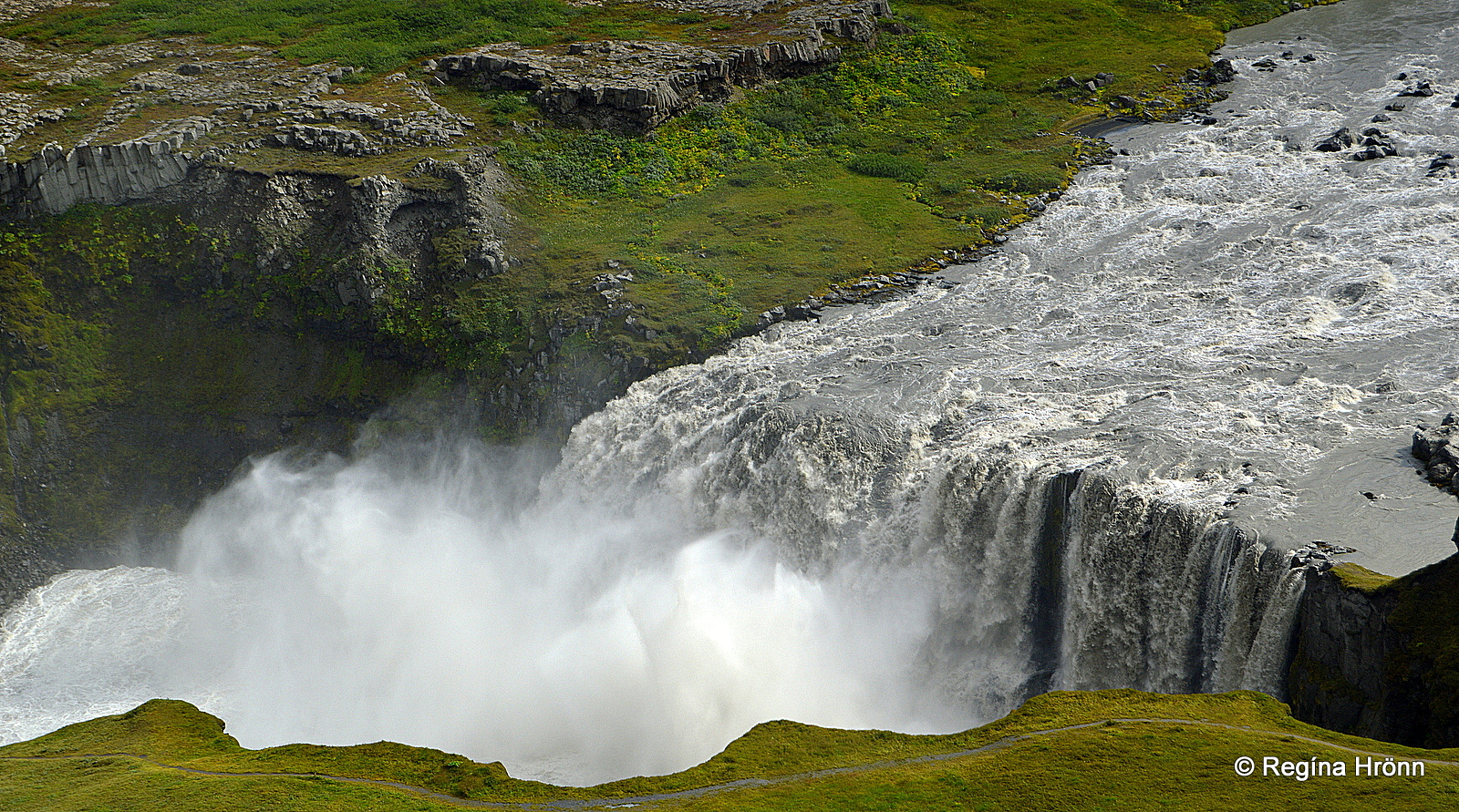 Hafragilsfoss waterfall as seen from the west bank

Hafragilsfoss is also a beautiful and massive waterfall, approx. 27 meters high, and to me, it looks like a miniature version of Dettifoss.

Driving back from visiting Dettifoss and Selfoss waterfalls you can turn from road 886 onto a trail on your right-hand side.

It is a bumpy trail, but at the end of it, you can leave your car and walk for a short distance from where you will have the most breathtaking view of Hafragilsfoss waterfall and the beautiful Hafragilsundirlendi, which is the name of this part of the Jökulsárgljúfur canyon.

I know that many people skip Hafragilsfoss waterfall, but do pay it a visit, the waterfall, and the canyon is so pretty in this location. 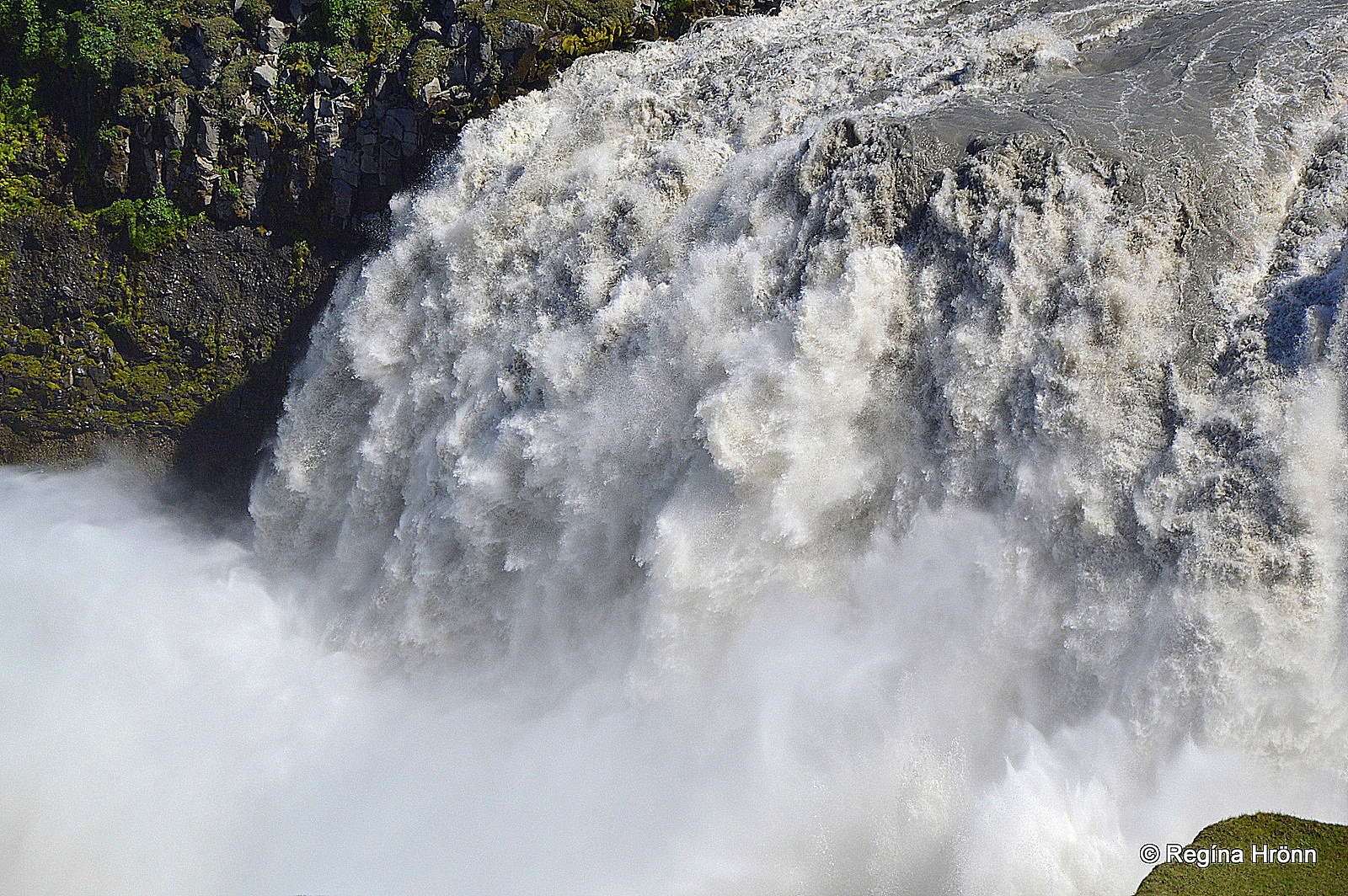 The massive Hafragilsfoss waterfall as seen from the west bank

There are several freshwater springs here creating lovely small waterfalls that run into the glacial river.

And where the freshwater meets the ice-cold grey glacial river the most beautiful blue color appears. I love this part of the canyon. 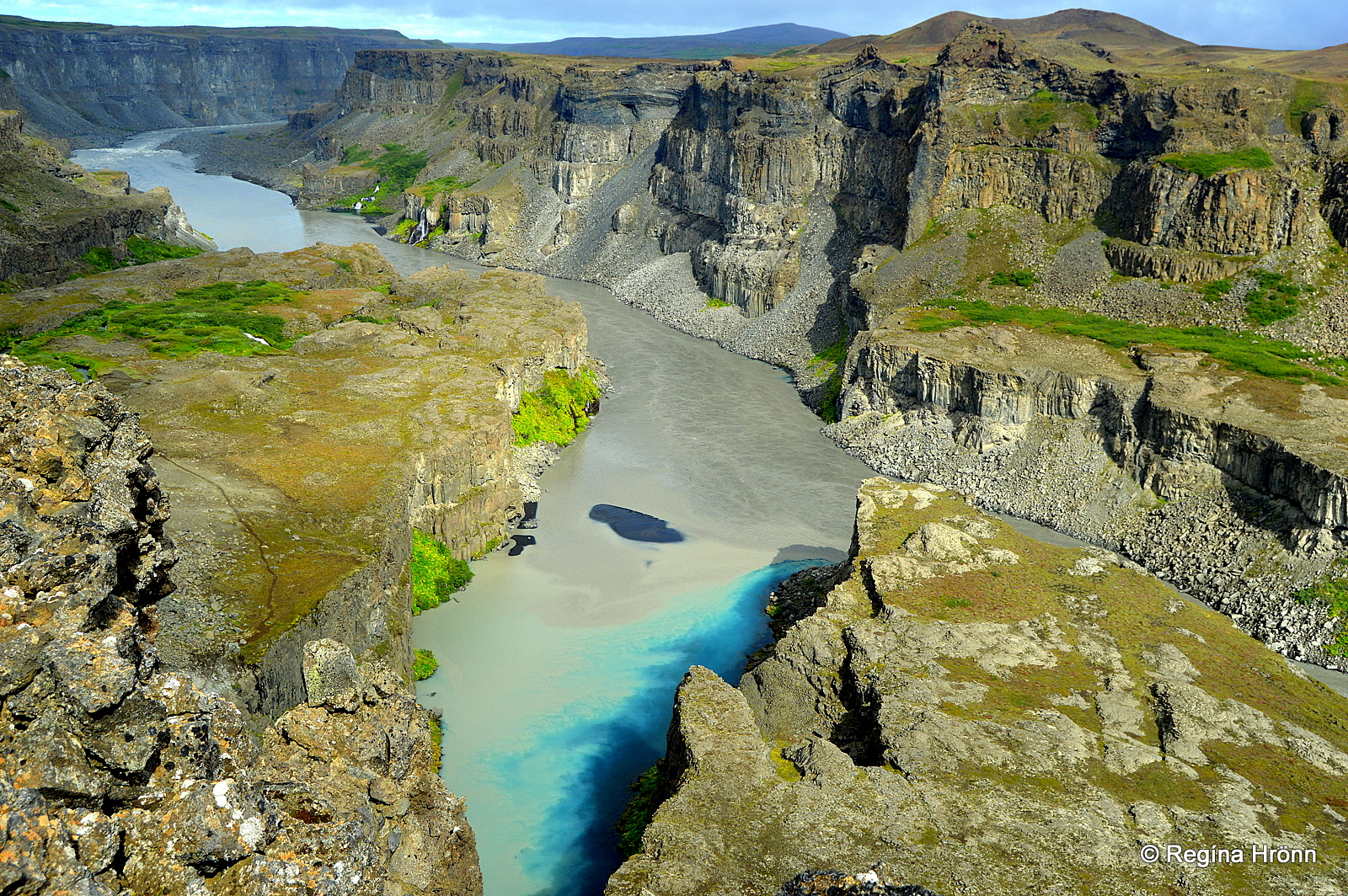 Jökulsárgljúfur canyon as seen from the west bank by Hafragilsfoss waterfall

Isn’t this a pretty sight where the freshwater meets the glacial river? I especially like visiting Jökulsárgljúfur canyon in the sunshine when the beautiful colors are enhanced by the sun.

Road 862 is approximately 50 km long, and if you continue driving north you will eventually reach road 85 in Kelduhverfi by the sea. There are many more beautiful locations in the Jökulsárgljúfur canyon along the way. 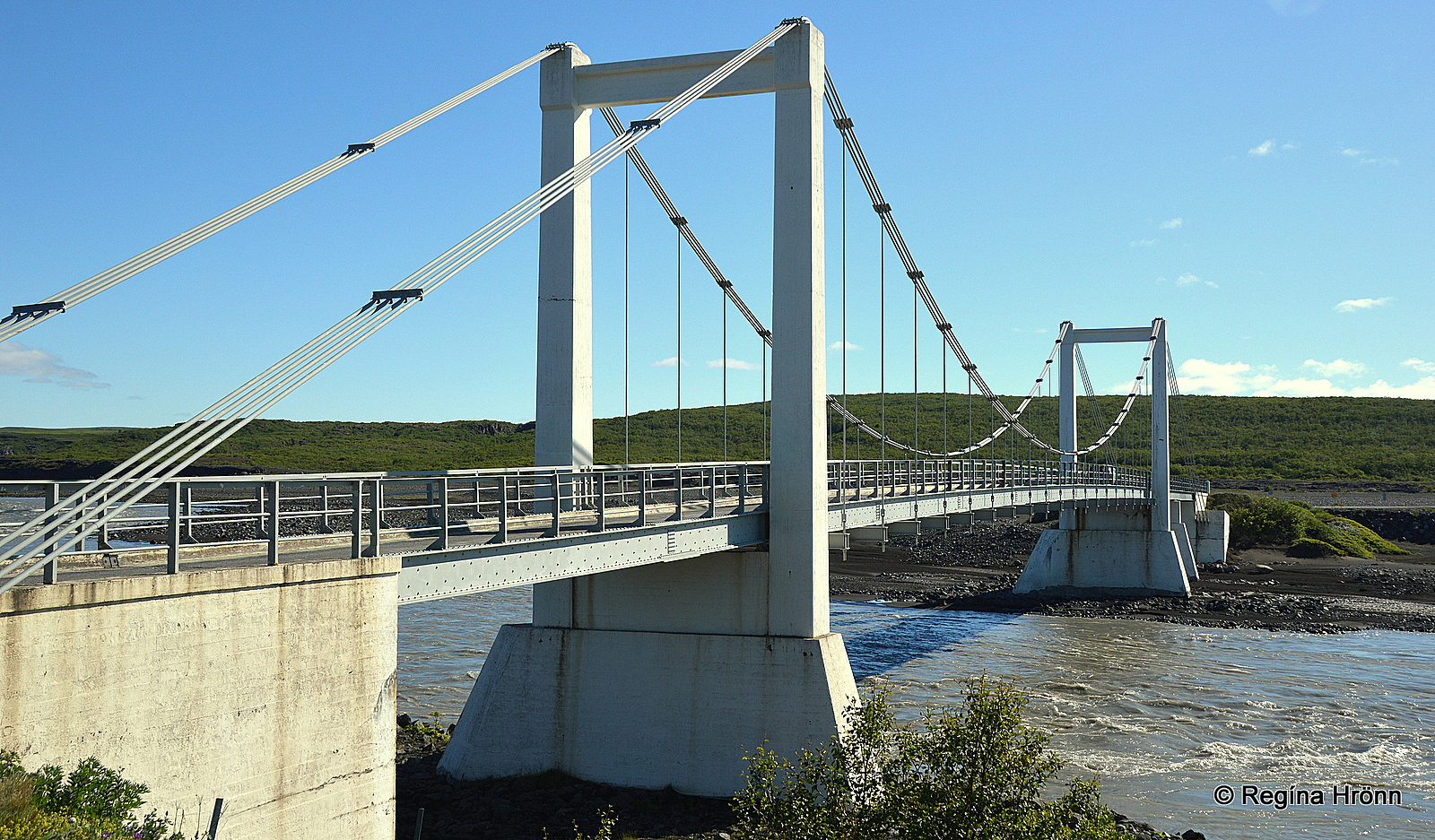 On road 85 you will find one of the 3 bridges over the glacial river. It is a suspension bridge built in 1957. Here the river finally reaches the sea after traveling for 206 km from the highland of Iceland.

Road 864 on the east side of the Jökulsárgljúfur canyon is closed in the wintertime and from time to time it is closed by Hafragilsfoss waterfall in the summertime.

Road 862 is also be closed for parts of the wintertime. See more information on the website of Vatnajökulsþjóðgarður National Park.

Jökulsárgljúfur canyon is part of the very popular and beautiful Diamond Circle of North-Iceland.

In my next travel-blog I will show you some more treasures of nature which Jökulsárgljúfur canyon has to offer: The extraordinary Hljóðaklettar – Echo Rocks in Jökulsárgljúfur Canyon.

There is yet another beautiful waterfall on the Diamond Circle – the historic Goðafoss waterfall – the Waterfall of the Gods.

Have a lovely time in the beautiful Jökulsárgljúfur canyon 🙂