Goðafoss waterfall in North-Iceland is one of Iceland's most historic waterfalls and one of the best-known waterfalls in Iceland. 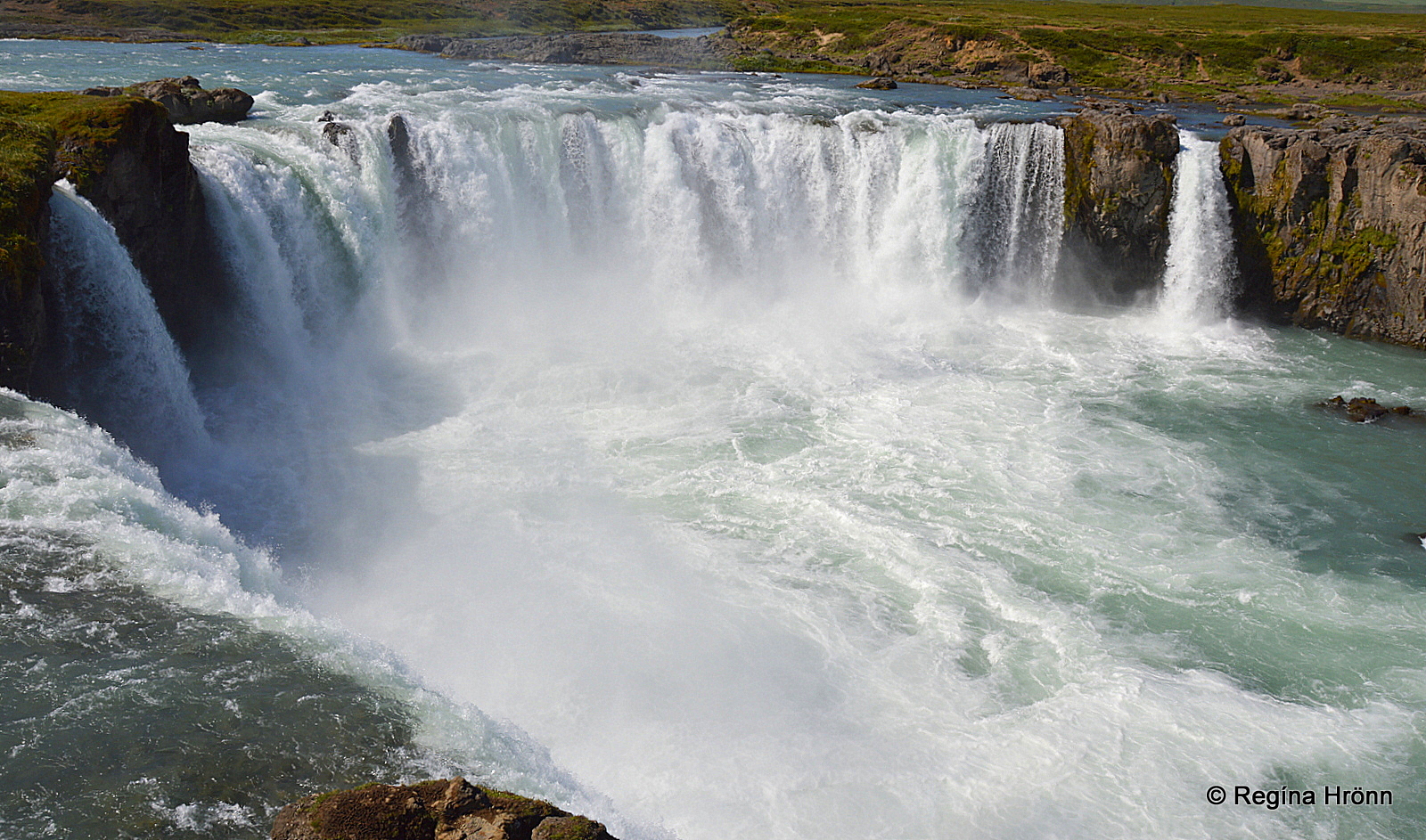 The name of the waterfall, Goðafoss, means the Waterfall of the Gods and I will tell you how it got this name a little later in this travel-blog.

The waterfall is one of the key stops on the popular Diamond Circle, which I have been showing you in my previous travel-blogs. 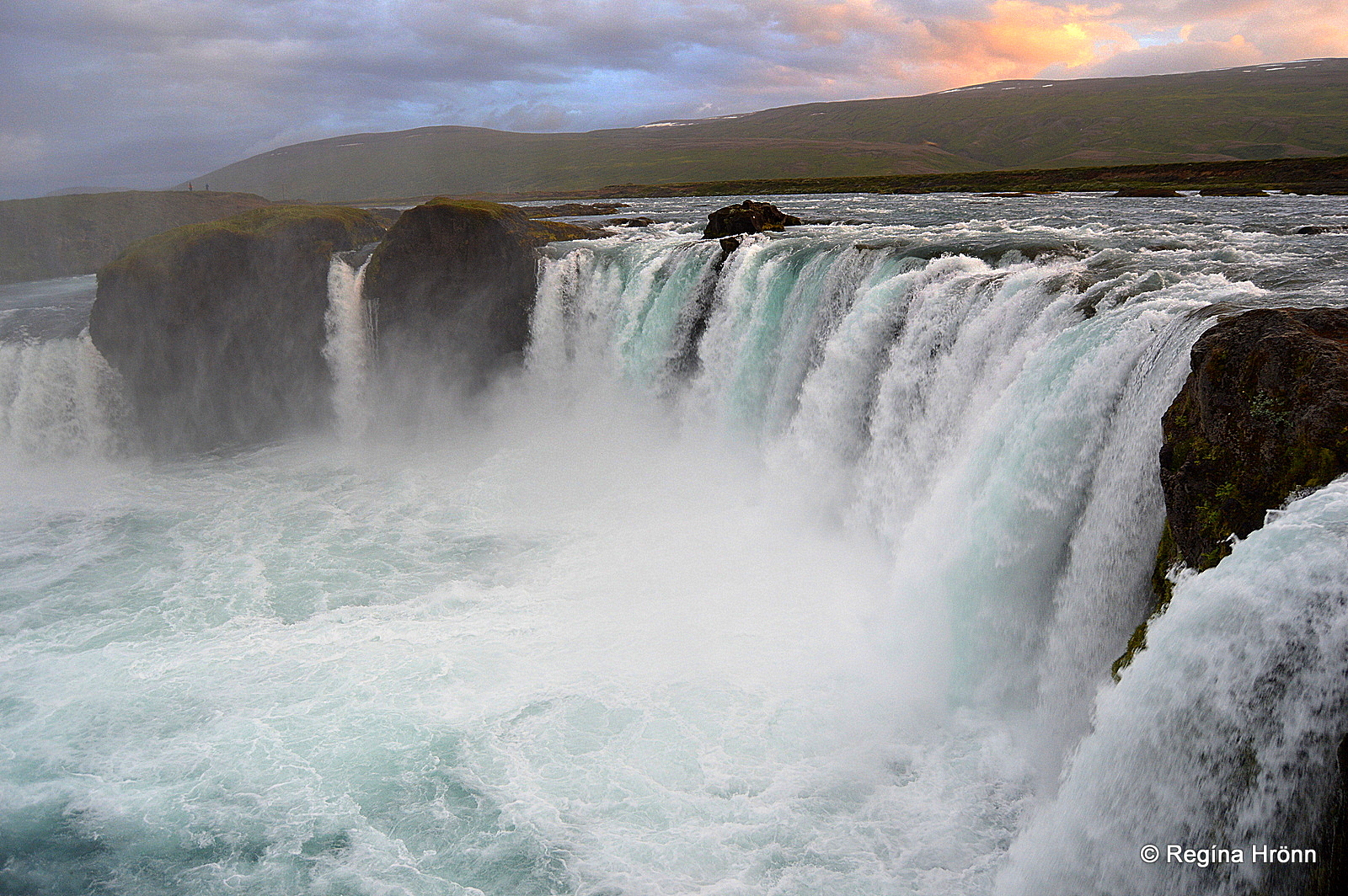 Goðafoss is not a tall waterfall, it has only got a drop of approximately 12 meters, but it is 30 meters wide and cascades with a considerable force in two cascades divided in the middle by large rocks.

The waterfall has got a horseshoe shape and forms a semi-circle, so it is a bit difficult to photograph unless you are standing right in front of it.

You will also see some smaller waterfalls, which in the summertime are just a trickle, but become quite impressive in the thaw in the springtime. 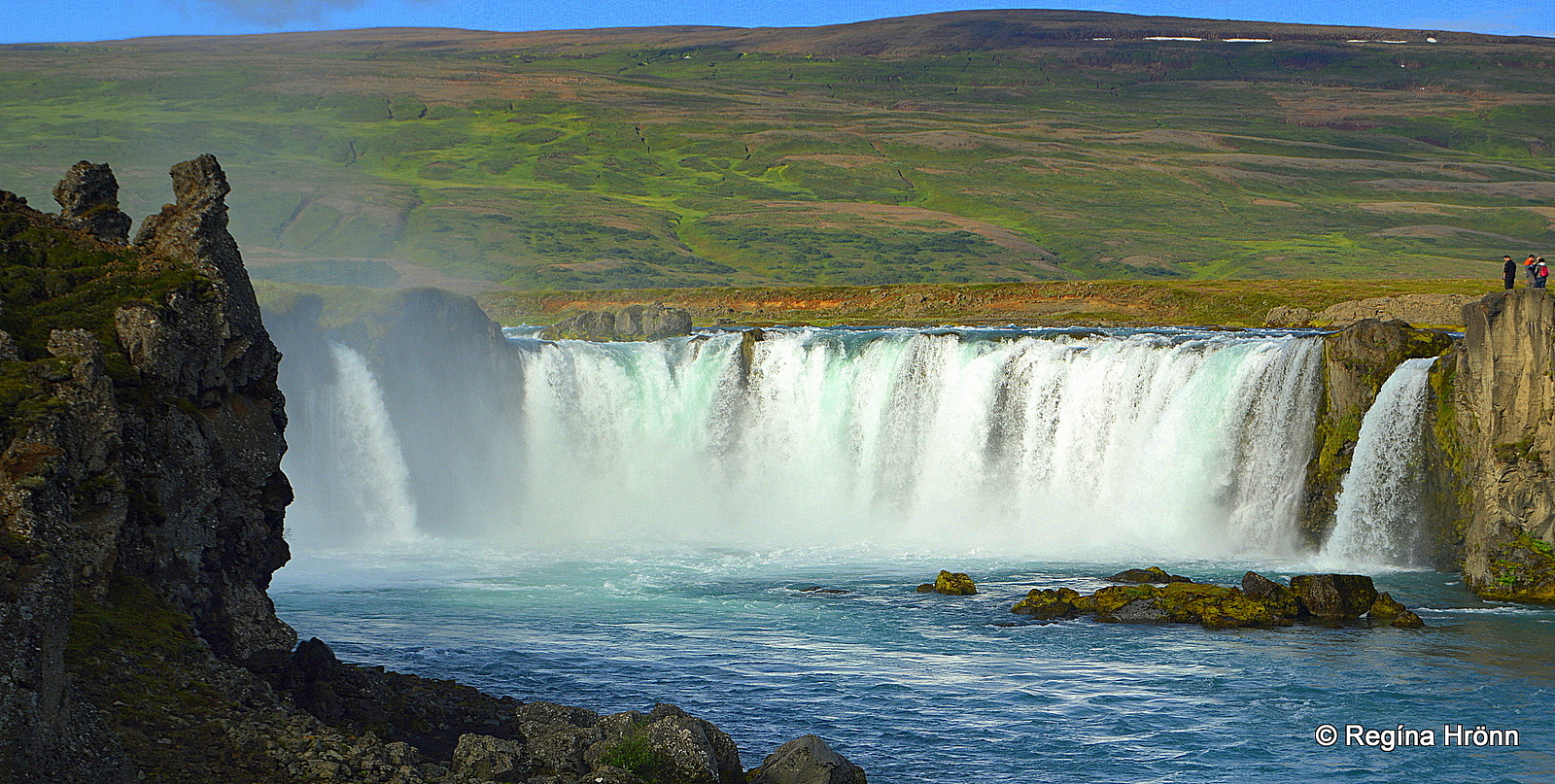 The Skjálfandafljót river, which is approximately 180 km long, originates in the highland, between Vatnajökull and Tungnafellsjökull glaciers, and runs its course in the sea at Skjálfandaflói bay.

The river, which is Iceland’s 4th longest river, is mainly a spring-fed river, but many direct runoff streams merge with the river on its way to the sea, and give the river its distinctive blue color.

The glacial water coming from the two glaciers dramatically changes the color and flow of the river during the summertime. 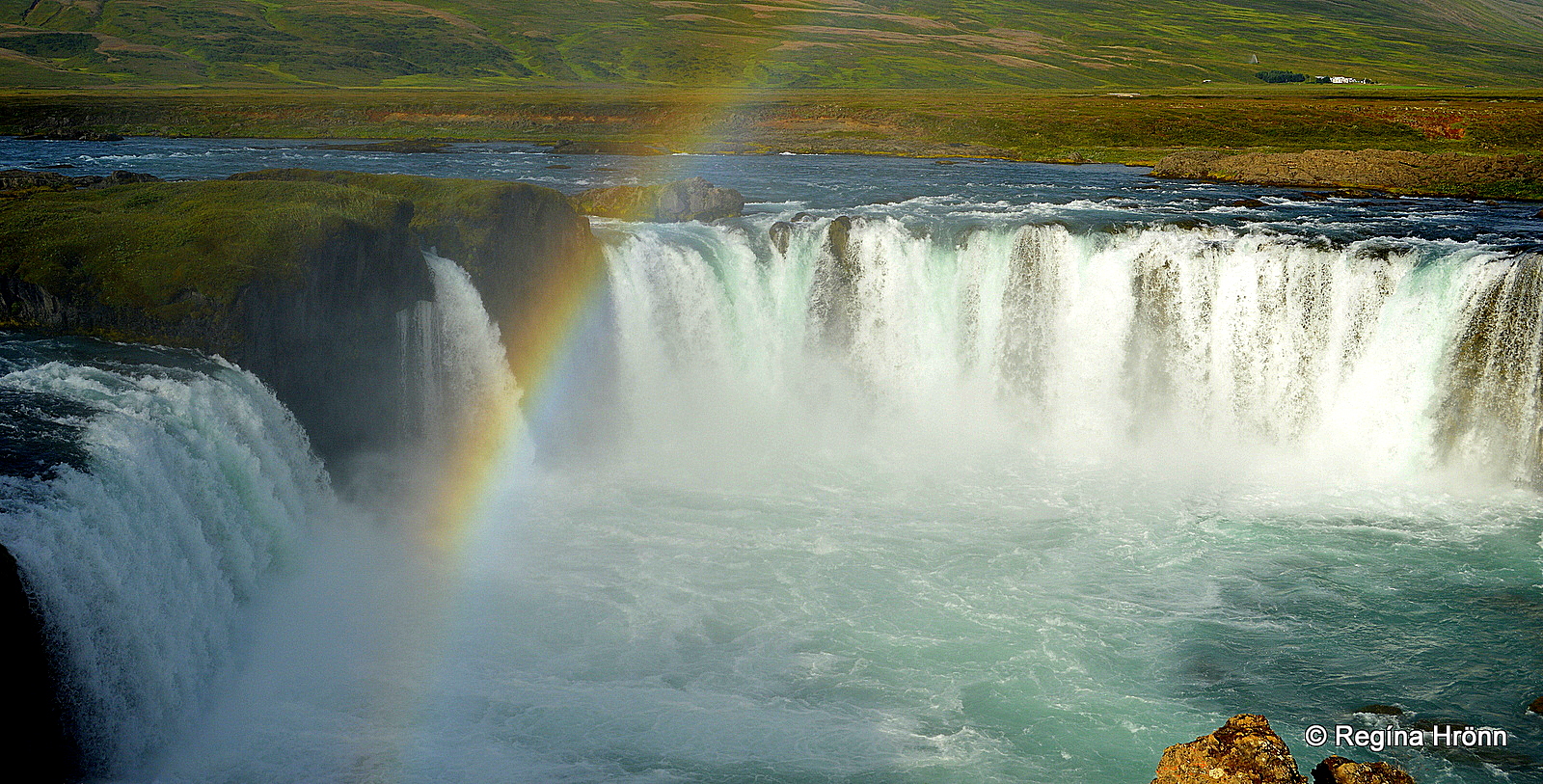 Goðafoss can be visited from both sides of the Skjálfandafljót river and observation platforms have been put up to protect nature and to keep us safe.

On the east bank of the river, it is possible to go down to the level of the river and stand right next to Goðafoss waterfall.

That route is a bit rocky though, but gives you a beautiful view of the waterfall as you can see in my video below:

Now, let me tell you how the name, Goðafoss – the Waterfall of the Gods – came about.

“Goð” were the gods in the old Norse religion of the Vikings. Some of the settlers had been Christian but Christianity started dwindling in Iceland with the second generation of the settlers, our Icelandic Sagas tell us.

When Christianity started spreading in the countries around Iceland, the Norwegian King Olav demanded that Icelanders converted to Christianity. 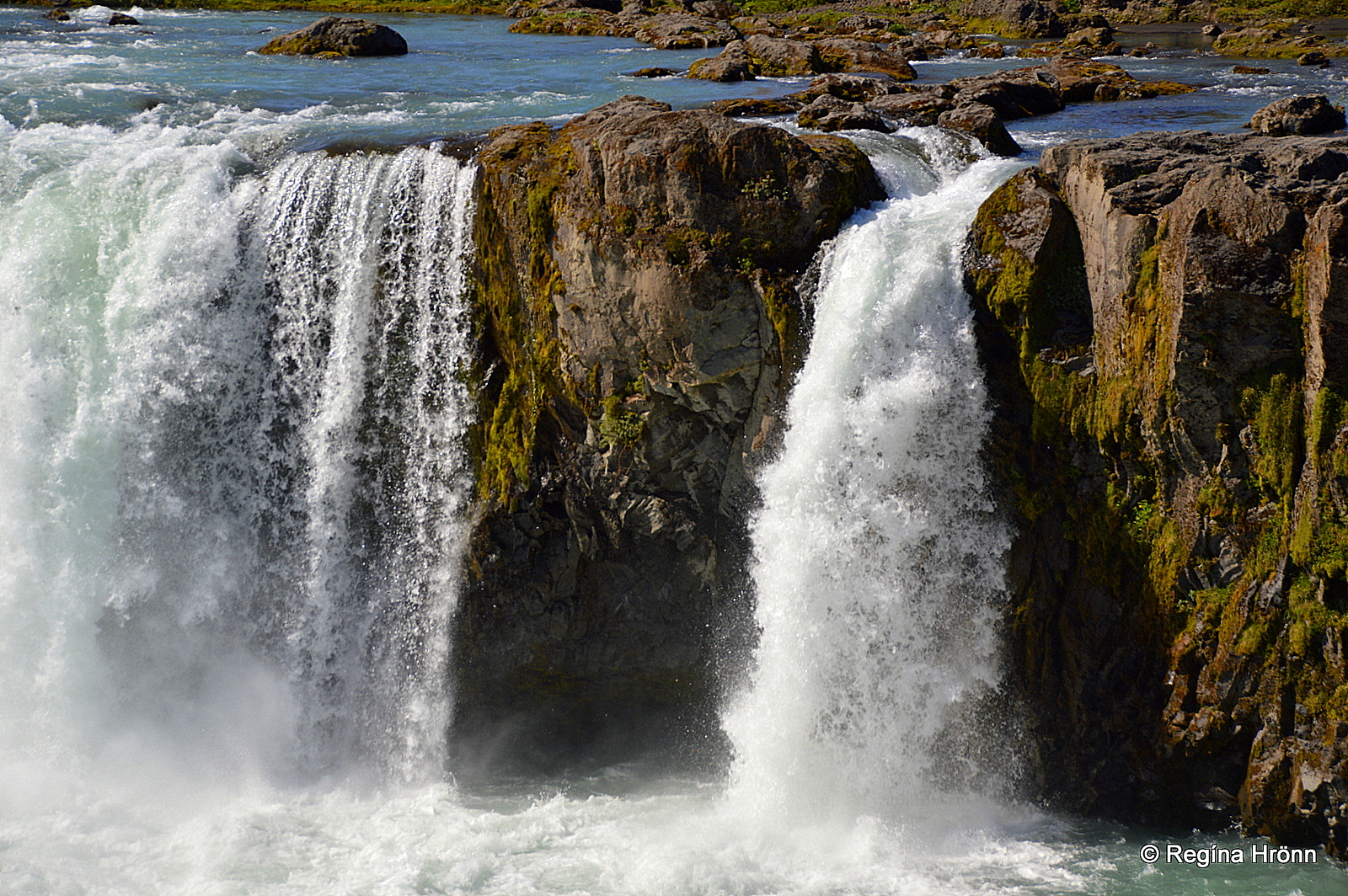 The Lawspeaker and pagan Chieftain, Þorgeir ljósvetningagoði, came from this area by Goðafoss, and represented the chieftainship of the Ljósavatn district at Alþingi parliament at Þingvellir.

He also held the highest position at Alþingi, as he was the Lawspeaker at Alþingi from 985-1001. This made him quite influential.

There was great animosity amongst the pagans and the Christians at Alþingi parliament, as changing one’s religion is no small matter. Especially if you are a Viking and worship Odin and Thor. 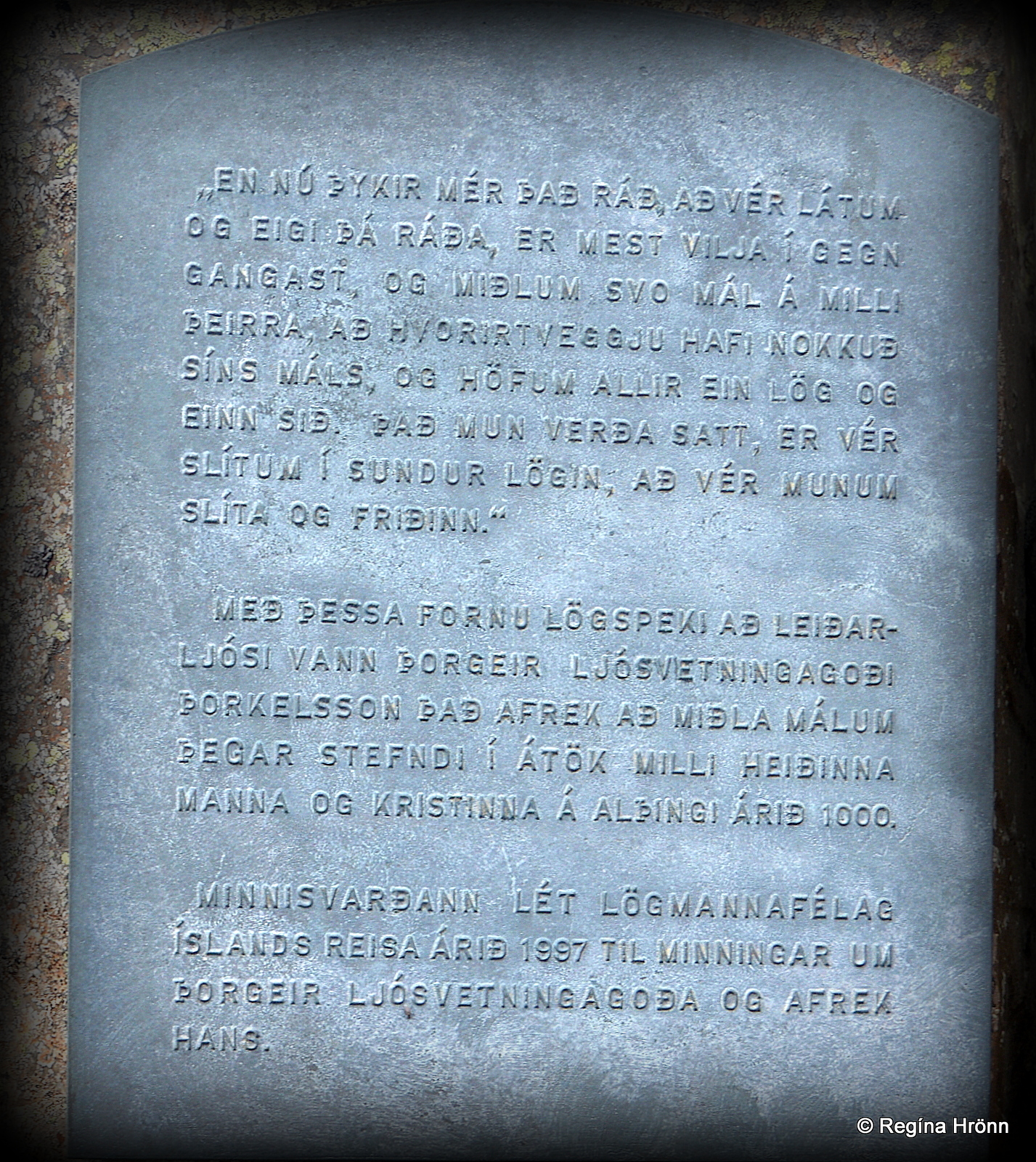 Þorgeir ljósvetningagoði was given the difficult task to make the crucial decision of whether Icelanders should become Christians or not.

Þorgeir withdrew into his booth at Alþingi, and lay under a fur blanket for a day and night – and then another day of equal length, or so the story tells us.

Þorgeir then came out and said: “Það mun satt vera er vér slítum lögin, þá slítum vér og friðinn” meaning “It will prove true that if we tear apart the laws then we will also tear apart the peace“.

Thus Christianity became the official religion in Iceland in the year 1000 without bloodshed. 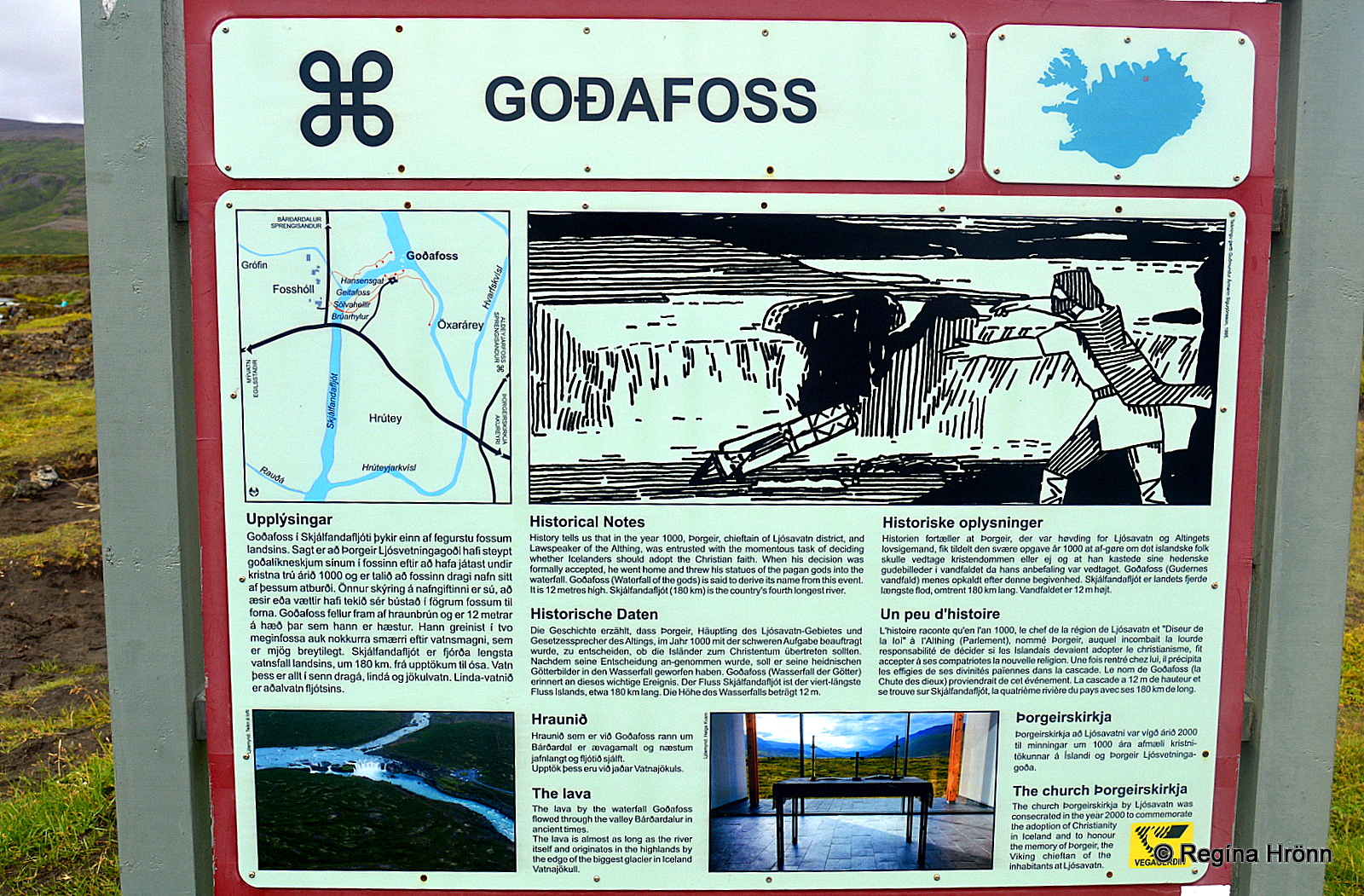 The information sign – Þorgeir throwing the gods into the waterfall

The story goes that right after returning back home from making that crucial decision at Alþingi at Þingvellir, Þorgeir Ljósvetningagoði threw his statues of the old Nordic gods (goð) into Goðafoss waterfall – and thus the waterfall got its name.

Unfortunately, we cannot find a source for this in the Icelandic Sagas, but the story has lived on in oral history. 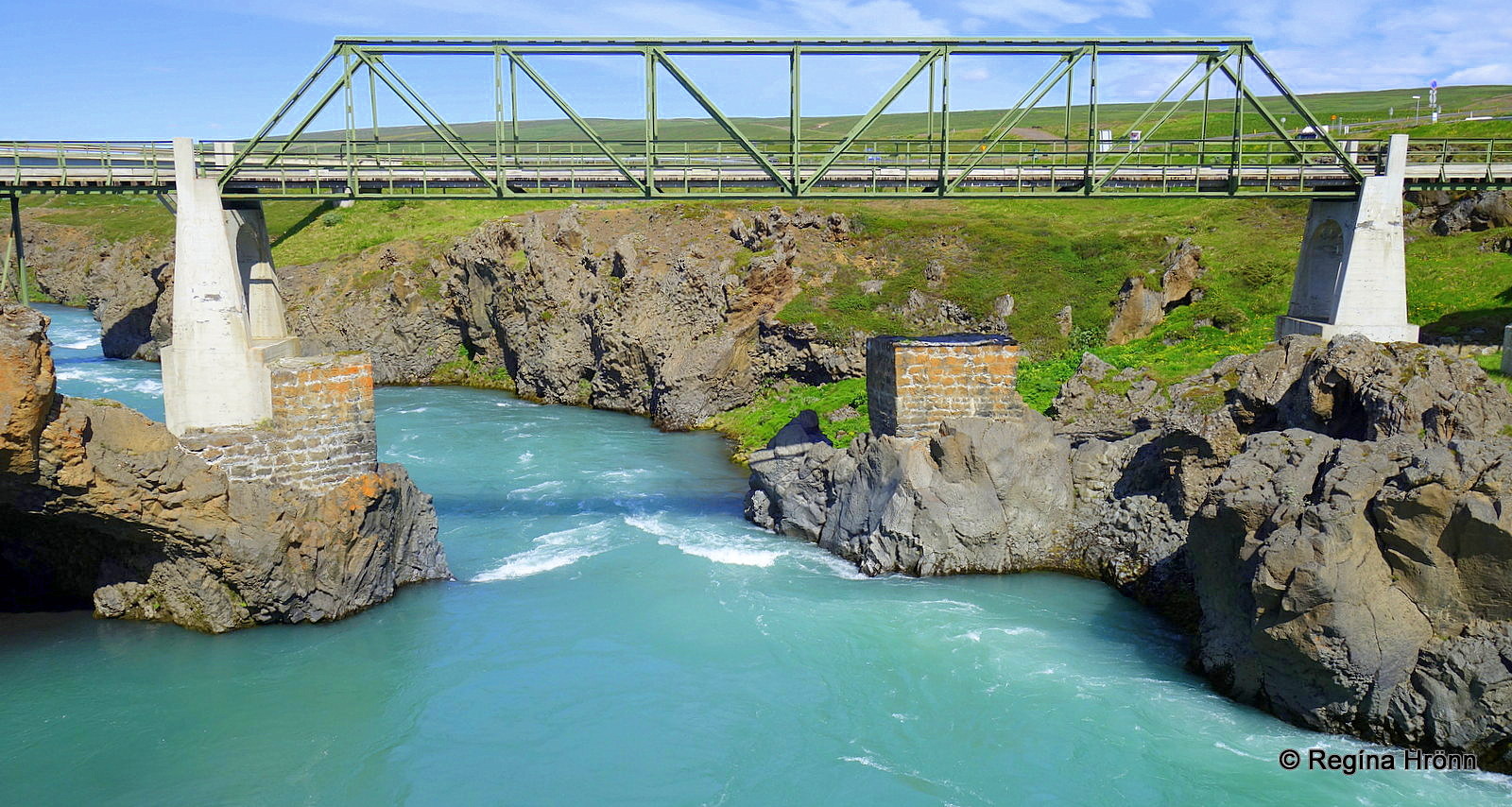 The bridges over the river Skjálfandafljót

The footbridge over the Skjálfandafljót river was consecrated in 1930, and the remains of an even older bridge from 1883 can be seen under the bridge.

A one-lane bridge was built in 1972 for car traffic, and now there are plans of building a new two-lane bridge over the river.

I have on several occasions seen a herd of horses being driven over the footbridge, which is a beautiful sight.

When you visit the west side of the waterfall you are actually standing on a small island, Hrútey or Ram Island.

The smaller river merges with Skjálfandafljót further downstream on the other side of the ring-road.

You can see how the river divides into two when you drive on ring-road 1, but when you stand by the waterfall itself the other part of the river is not visible, thus one doesn’t get the feeling of standing on an island. 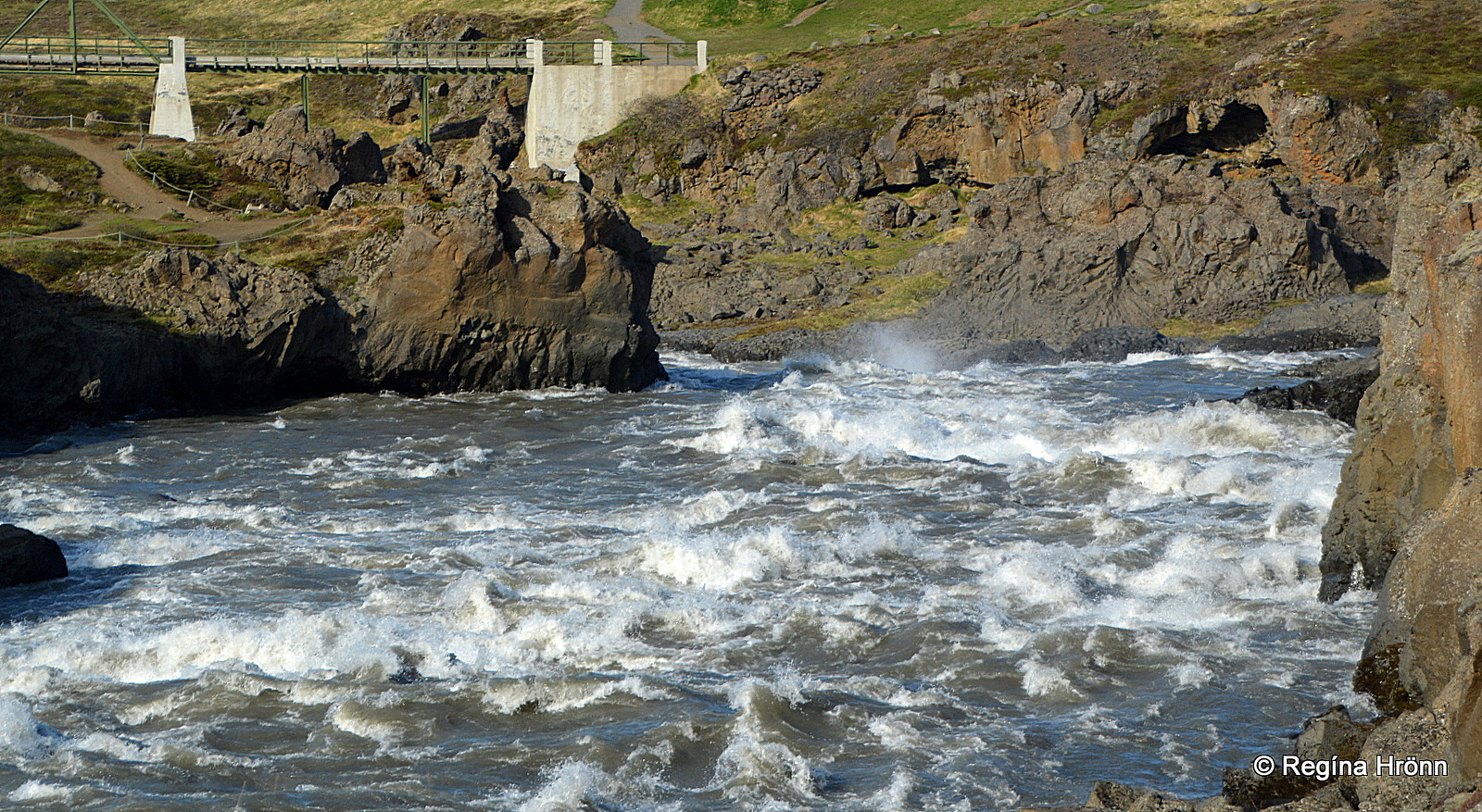 When the glacial water rushes down the river in the thaw, the river changes color, from being beautifully powdery blue and green in color, to being brown and grey and very forceful.

In springtime and the summertime during the thaw Goðafoss becomes massive and the river turns into a roaring glacial river and can be quite scary looking. I took the photo above of the Skjálfandafljót river in June.

What I especially like about visiting Goðafoss waterfall, apart from the fact that to us locals who visit it regularly, it has almost become like an old friend, are the beautiful basalt column formations. 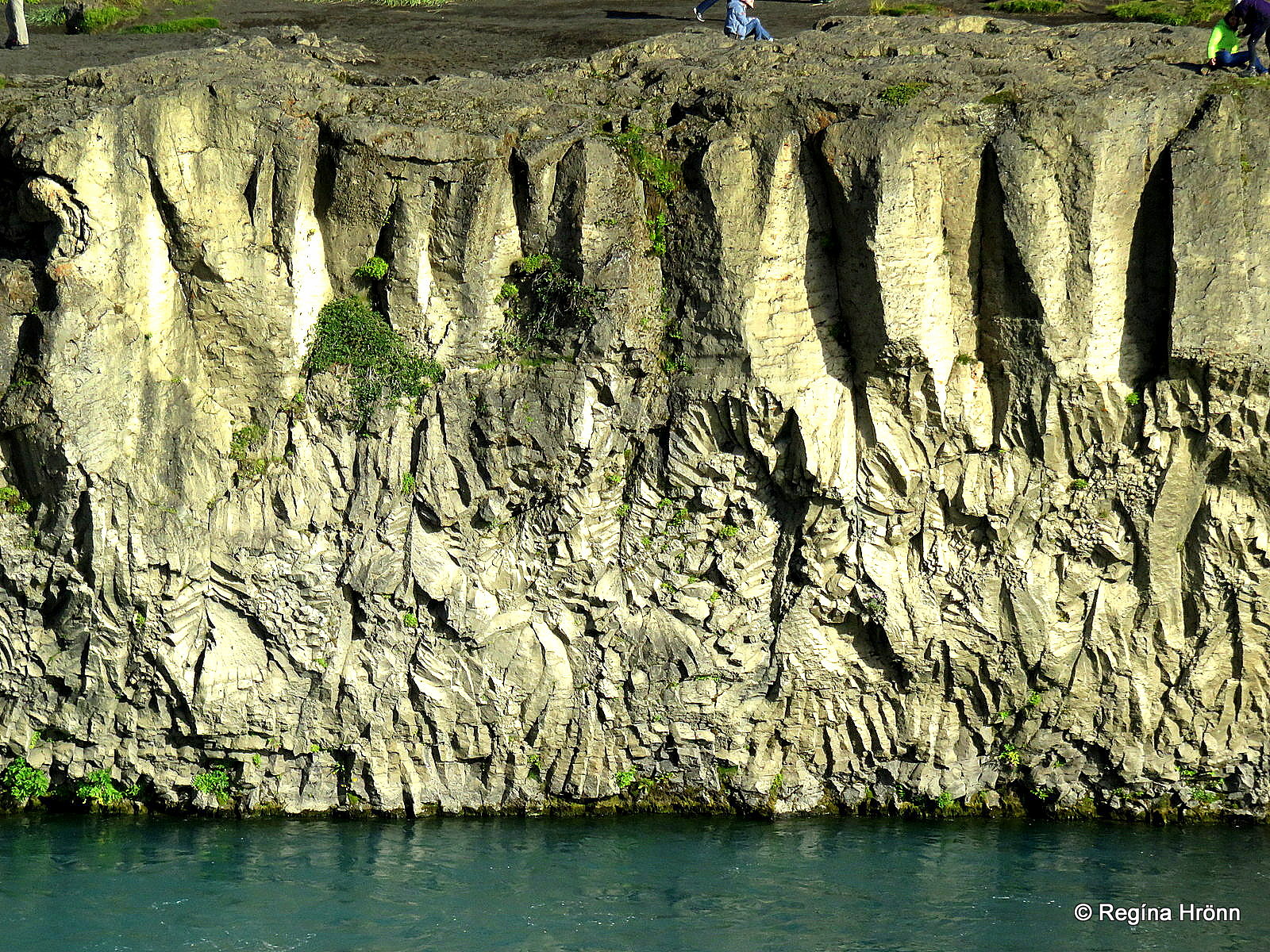 The basalt formations are quite extraordinary here by Goðafoss and look like artwork. If you look closely you will see many faces and trolls in the lava, but Icelandic folklore is filled with troll- and elf stories.

This lava field, Bárðardalshraun, is around 8-9,000-years old, and you can see in my photo below how rocks have fallen down from the lava in many places by the river. 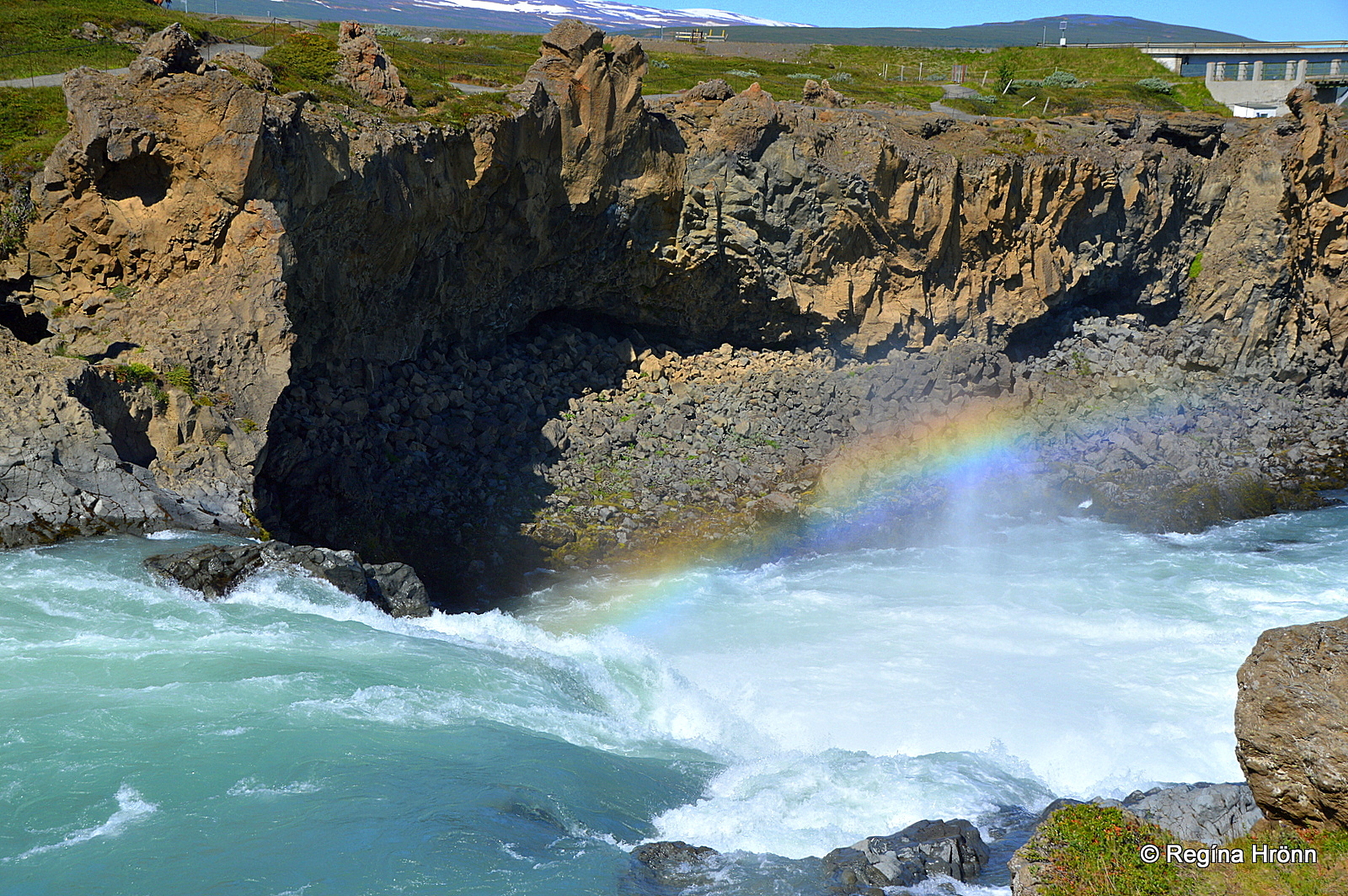 Geitafoss waterfall as seen from the east bank

Downstream of Goðafoss you will see another powerful waterfall, Geitafoss or Goats’ waterfall.

This waterfall is even smaller than Goðafoss, only approximately 5 meters tall, so you might not even realize that this is a waterfall, only a very turbulent part of the river.

It is possible to walk straight down to Geitafoss from the east bank and get very close to the river.

From the west bank, it was possible to go to Hansensgatið hole (an arch rock) and have a look at the waterfall from above. The tracks have been fenced off though to keep us safe.

A couple of years ago a tourist fell into Skjálfandafljót river here by Geitafoss.

And he has not been the only one to fall into the river, as Hansensgatið hole was named after Hansen, a pharmacist from Akureyri, who fell through it.

A horse has also fallen into the river in this place, so let’s be extra careful as the river is extremely forceful in this spot by Geitafoss. 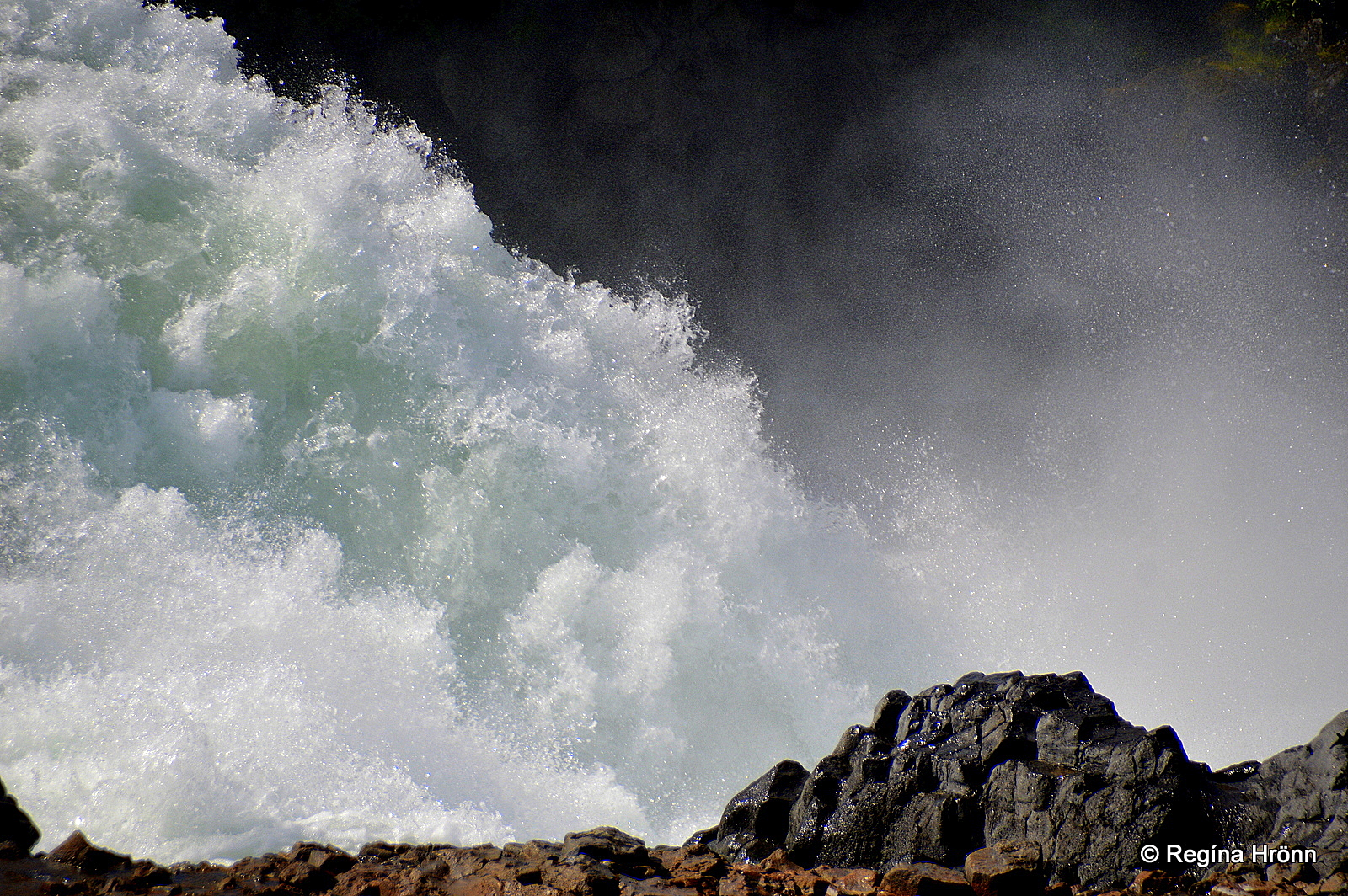 When salmons swim up the Skjálfandafljót river, Geitafoss is a major hurdle, so they don’t swim any further up the river. From time to time you might spot anglers trying their luck in the river below Geitafoss. 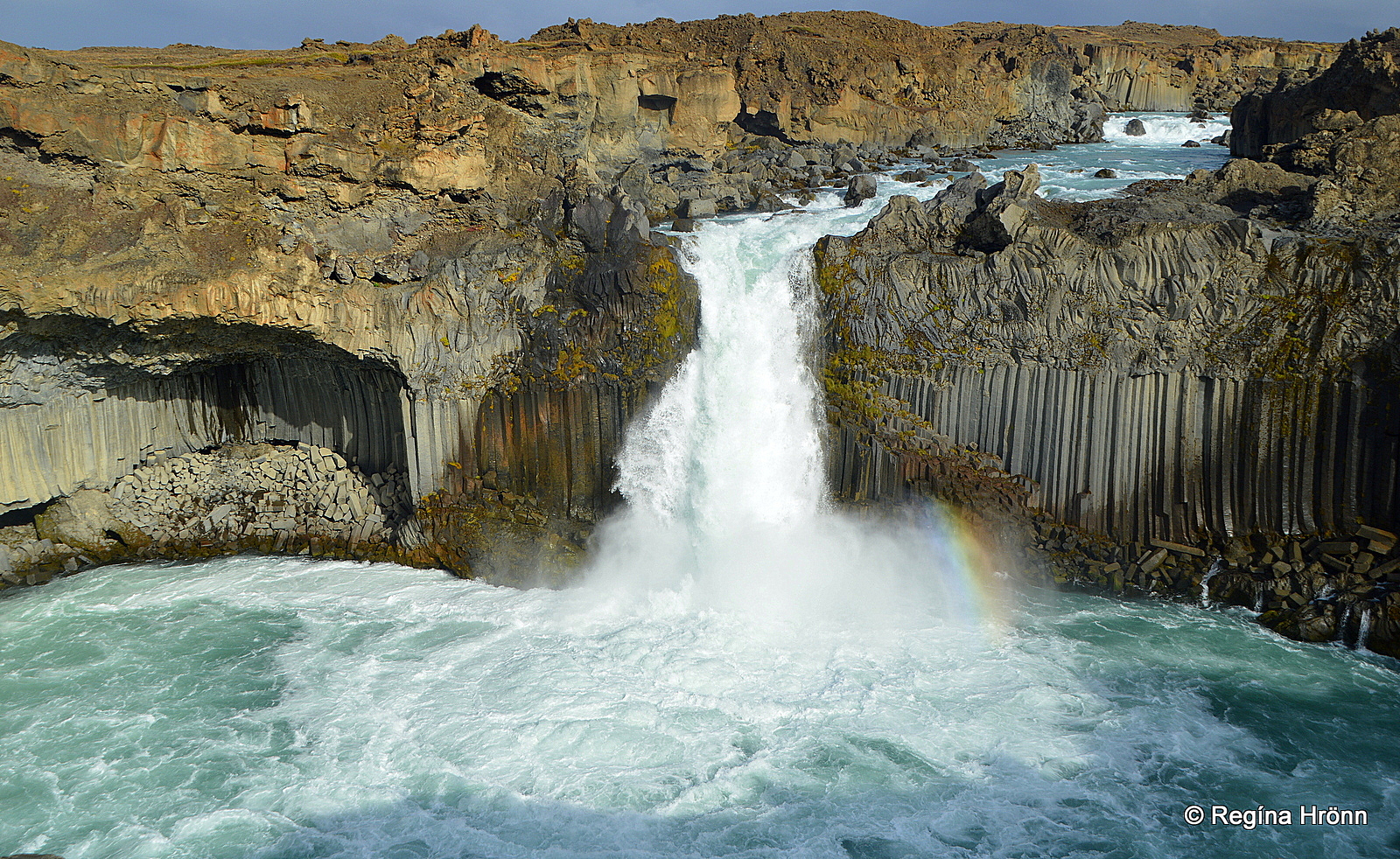 The name of that waterfall is Aldeyjarfoss waterfall.

Aldeyjarfoss is also set in beautiful basalt columns, and the settings at Aldeyjarfoss are even more breathtaking than at Goðafoss.

Even further up the river on the edge of the highland is the Hrafnabjargafoss waterfall. A ruggedly beautiful waterfall, well worth a visit.

The advantage Goðafoss waterfall has over these two waterfalls is that it is right by the ring-road and is thus very accessible.

To reach the two other waterfalls you have to drive for approximately 41 km into Bárðardalur valley.

Further downstream from Goðafoss waterfall on the other side of ring-road 1 there are smaller waterfalls, called Ullarfoss and Barnafoss.

Goðafoss is located 34.5 km away from Akureyri – the Capital City of North Iceland, if you go through the Vaðlaheiðargöng tunnel, and 45 km away from the Mývatn area.

Close by is also one of the majestic turf houses in Iceland: The Laufás Turf Museum and Heritage Site.

Have a lovely time at Goðafoss waterfall 🙂