Húsavík town, this lovely little gem in North-Iceland has become best known for being the whale watching capital of Iceland. And Húsavík became even better known when parts of the American film the Eurovision Song Contest: the Story of the Fire Saga were filmed in this beautiful town.

Gamli baukur restaurant by the harbor in Húsavík

In my last travel-blogs I showed you the main attractions in Jökulsárgljúfur canyon and the beautiful Ásbyrgi and Botnstjörn pond, all of which are stops on the Diamond Circle.

We have by now driven around the Tjörnes peninsula on road 85, and our next stop is at Húsavík town, another stop on the popular Diamond Circle in North-Iceland.

Húsavík is a lovely little fishing town with approximately 2,400 inhabitants and here you will find many beautiful old wooden houses, shops, hotels, and restaurants. 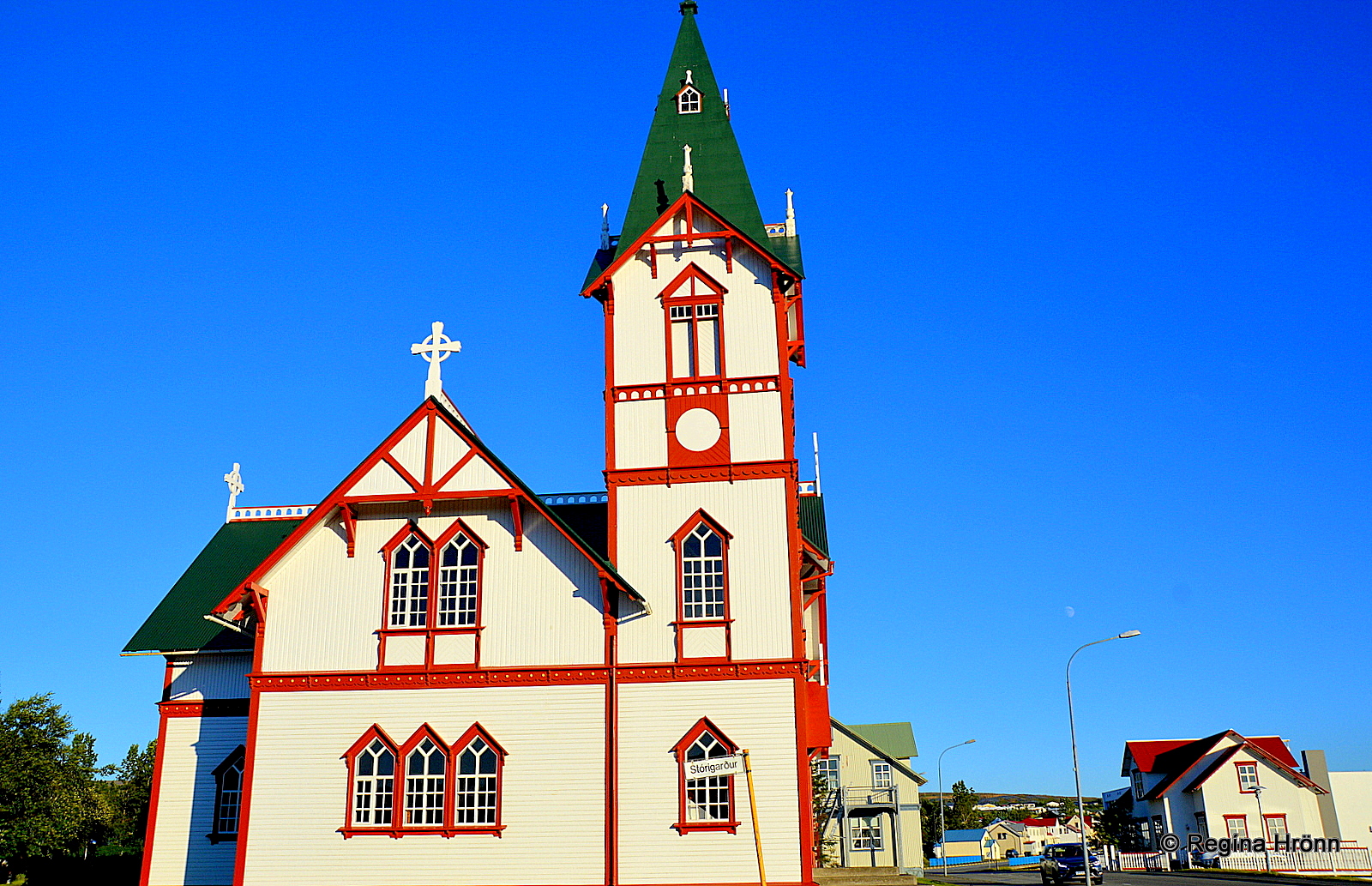 Húsavík’s gem and landmark is Húsavíkurkirkja church, which in my opinion is one of the most beautiful churches in Iceland.

Húsavíkurkirkja church was built in 1907 by Rögnvaldur Ólafsson, Iceland’s first architect the same year as the 2 houses behind it, which you see in my photo above.

These 2 houses were built by my great-grandfather and his father and my grandmother was born in the house next to the church, called Bjarnahús house. 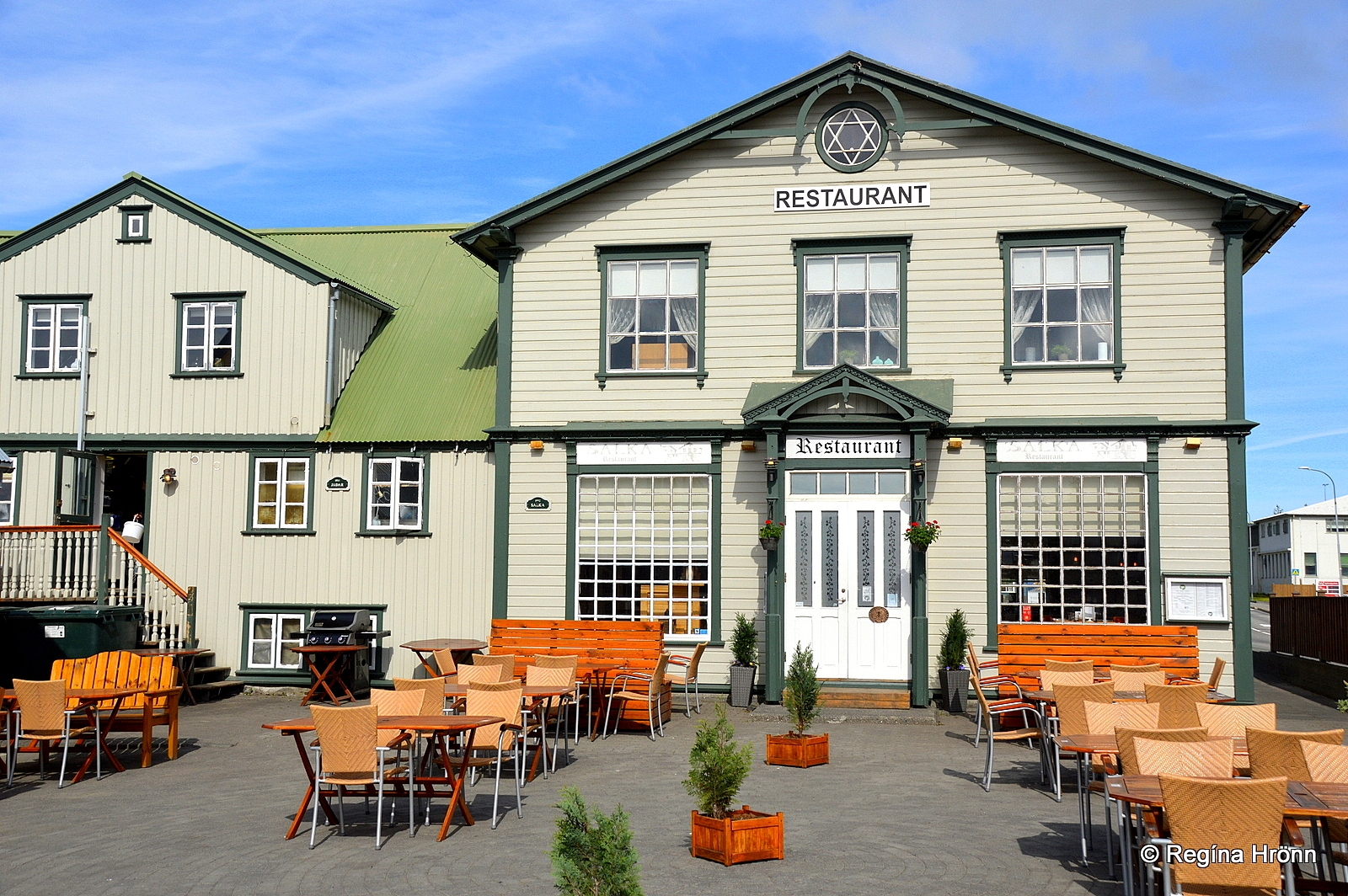 The house Jaðar to the left is Húsavík’s oldest house, built in 1883

The oldest house in Húsavík, to the left in my photo above, is Jaðar, built in 1883 by my husband’s great-grandfather, so the both of us have ties to Húsavík.

The beautiful house to the right, adjacent to Jaðar, was built in 1902 and housed the sales offices of Kaupfélag Þingeyinga – the oldest Cooperative in Iceland, established in 1882.

The red-painted Árholt in my photo below has been called the most romantic house in Húsavík. It was built in 1891 and stands by the river Búðará in beautiful settings. It is lovely taking a walk here in the park by the river. 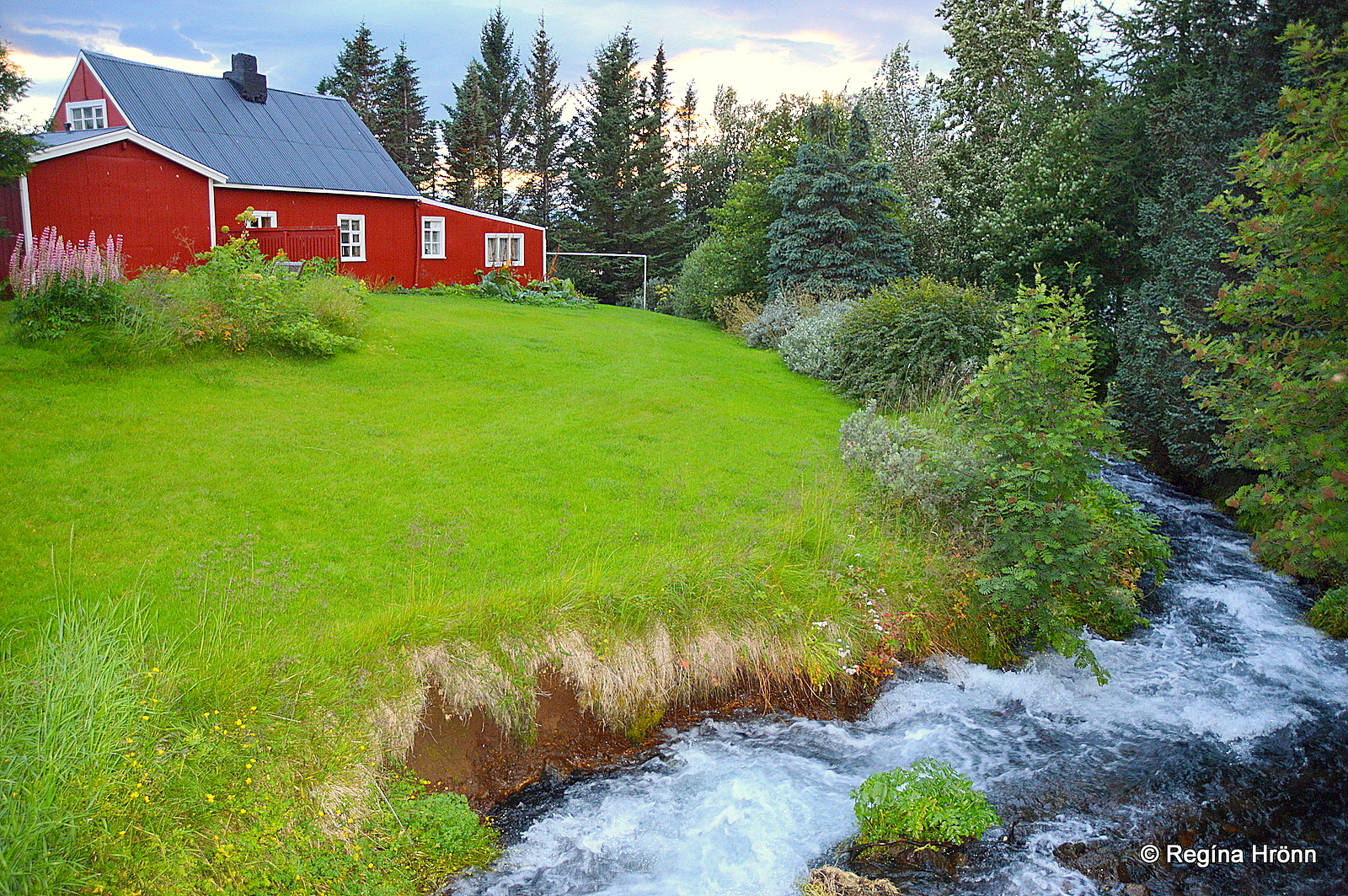 There are many more beautiful old houses in Húsavík and the name Húsavík literally means the Cove of Houses.

Landnáma – the Book of Settlements of Iceland tells us about the people who visited Iceland before it got settled, i.e. before 874 AD.

One of them was the Swede Garðar Svavarsson, who arrived in Iceland in approximately 870. He built að house here by Skjálfandi and spent the winter in Iceland.

He called the island Garðarshólmur, but it had been named Snæland by a previous visitor to Iceland, Naddoður. 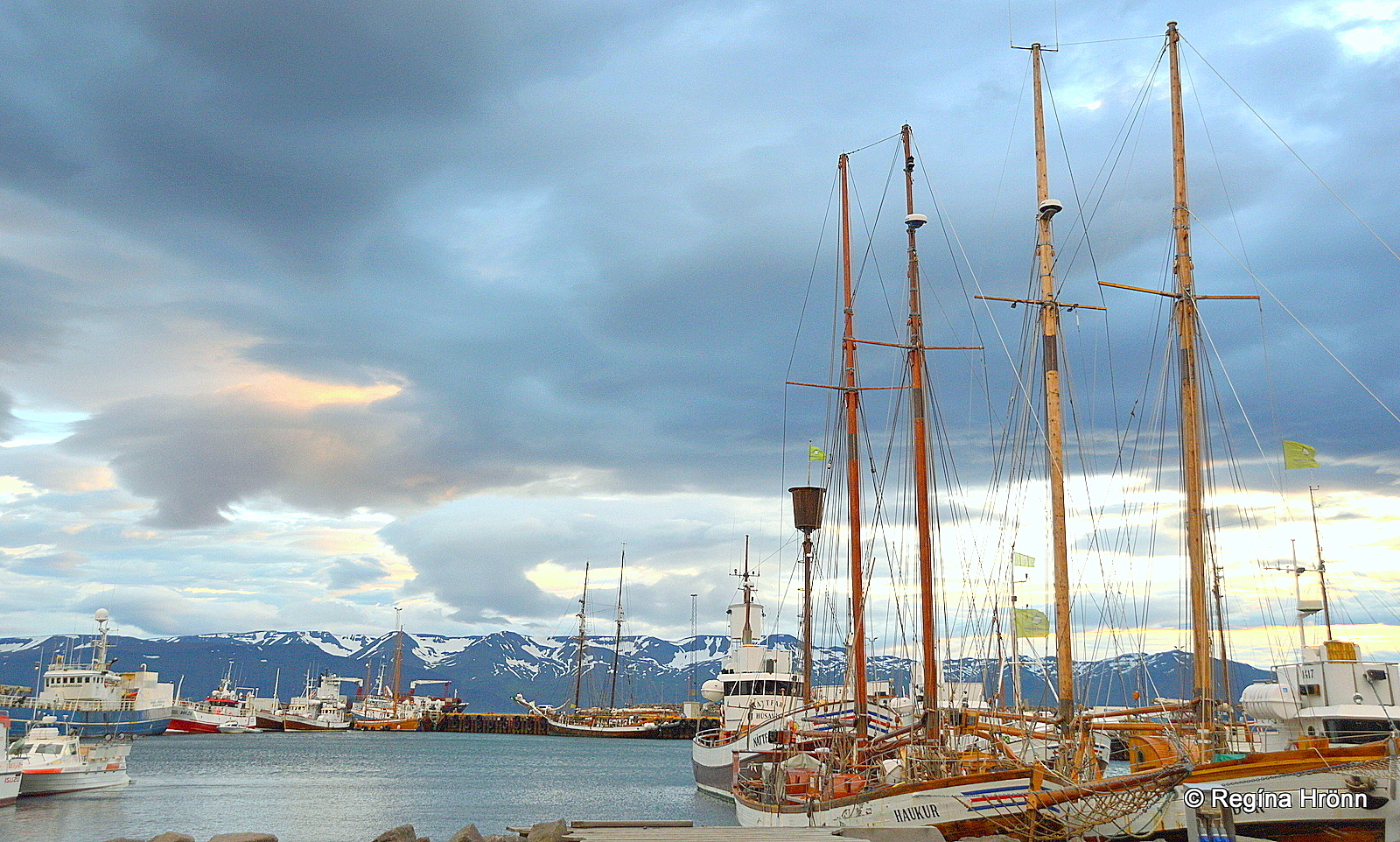 When Garðar Svavarsson left Iceland the following spring, a boat broke free from the ship. In the boat was one of his men Náttfari, a slave and a bondwoman.

They stayed behind and built a house in Náttfaravík by the Víknafjöll mountains.

These people could be called the first settlers in Iceland before the organized settlement started around 874. 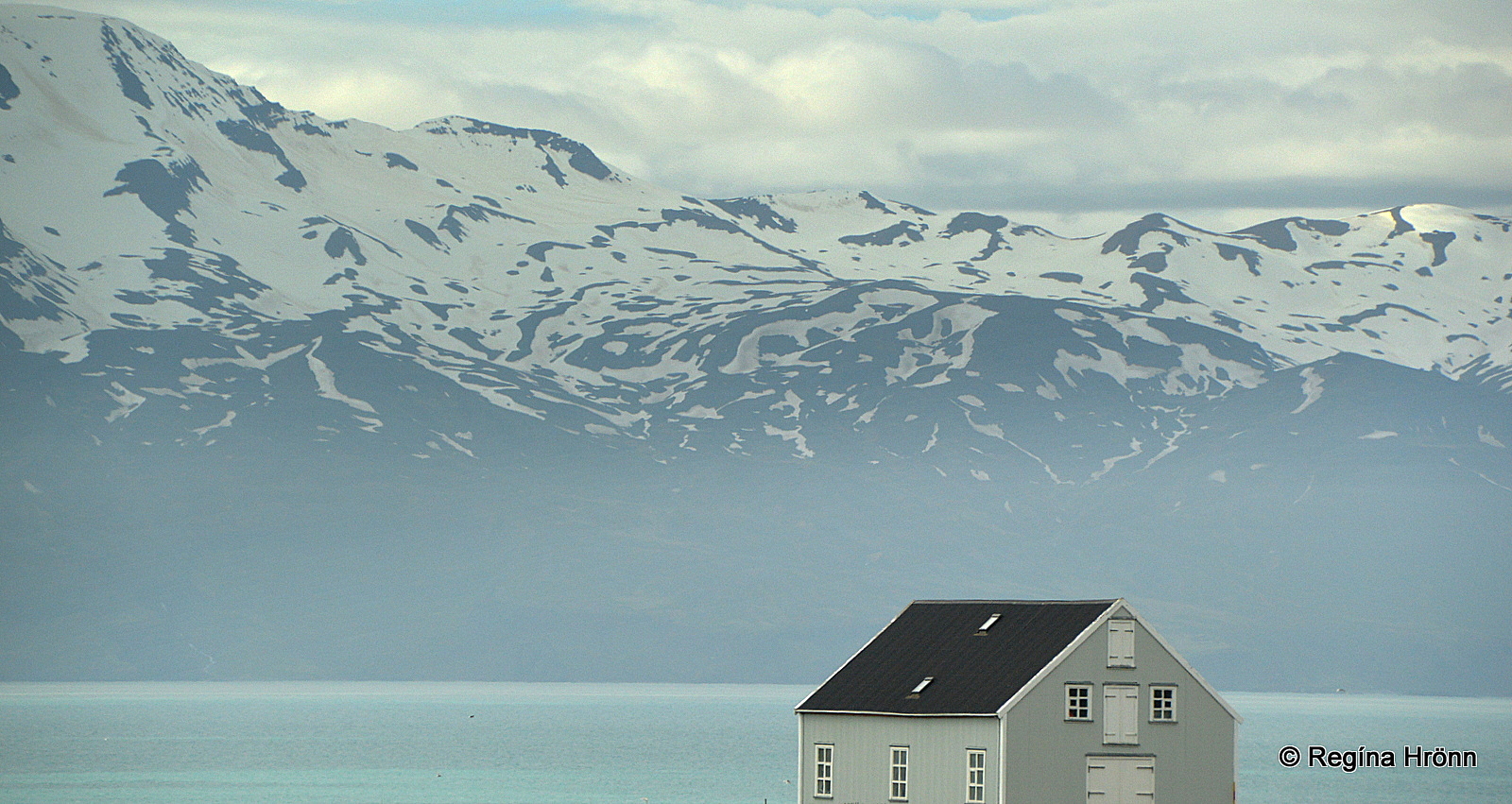 A lonely house just outside of Húsavík town

Náttfari moved to Reykjadalur valley close by but was driven away from there back to Náttfaravík when the Norse settlers arrived.

So the Húsavík area might have been the location for the first settlement in Iceland, but Reykjavík, the capital city of Iceland, holds that title. 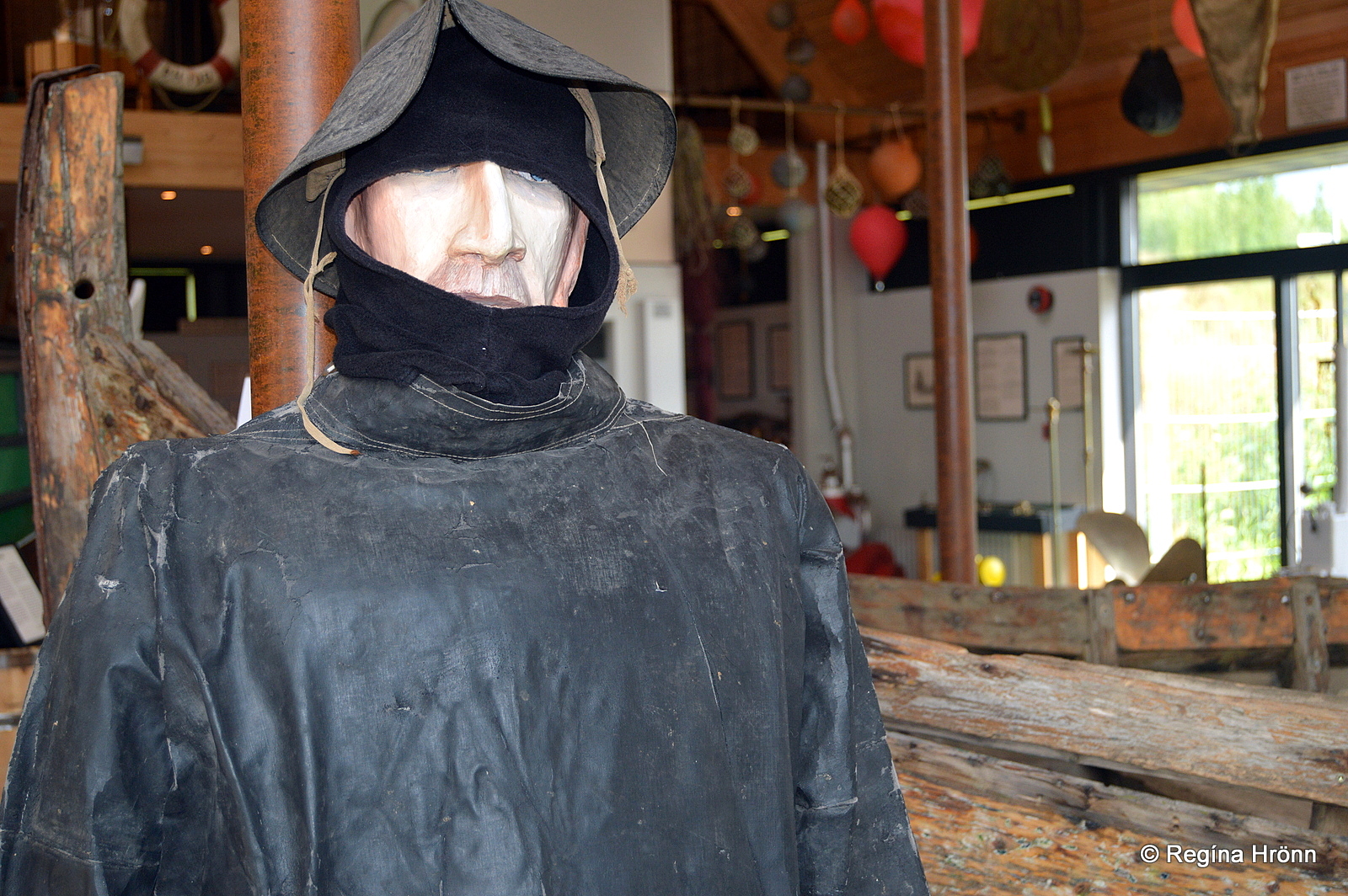 At the Maritime Exhibition

There are several museums of interest in Húsavík, two of them are the Exploration Museum and Safnahúsið – the District Culture Center, with a Maritime Exhibition and Man and Nature – 100 years in Þingeyjarsýslur, where you can find a stuffed polar bear amongst other museum artifacts.

And of course, there is a Whale Museum in Húsavík, where you can get to know all about the whales before you see these majestic creatures in action on a whale watching tour. 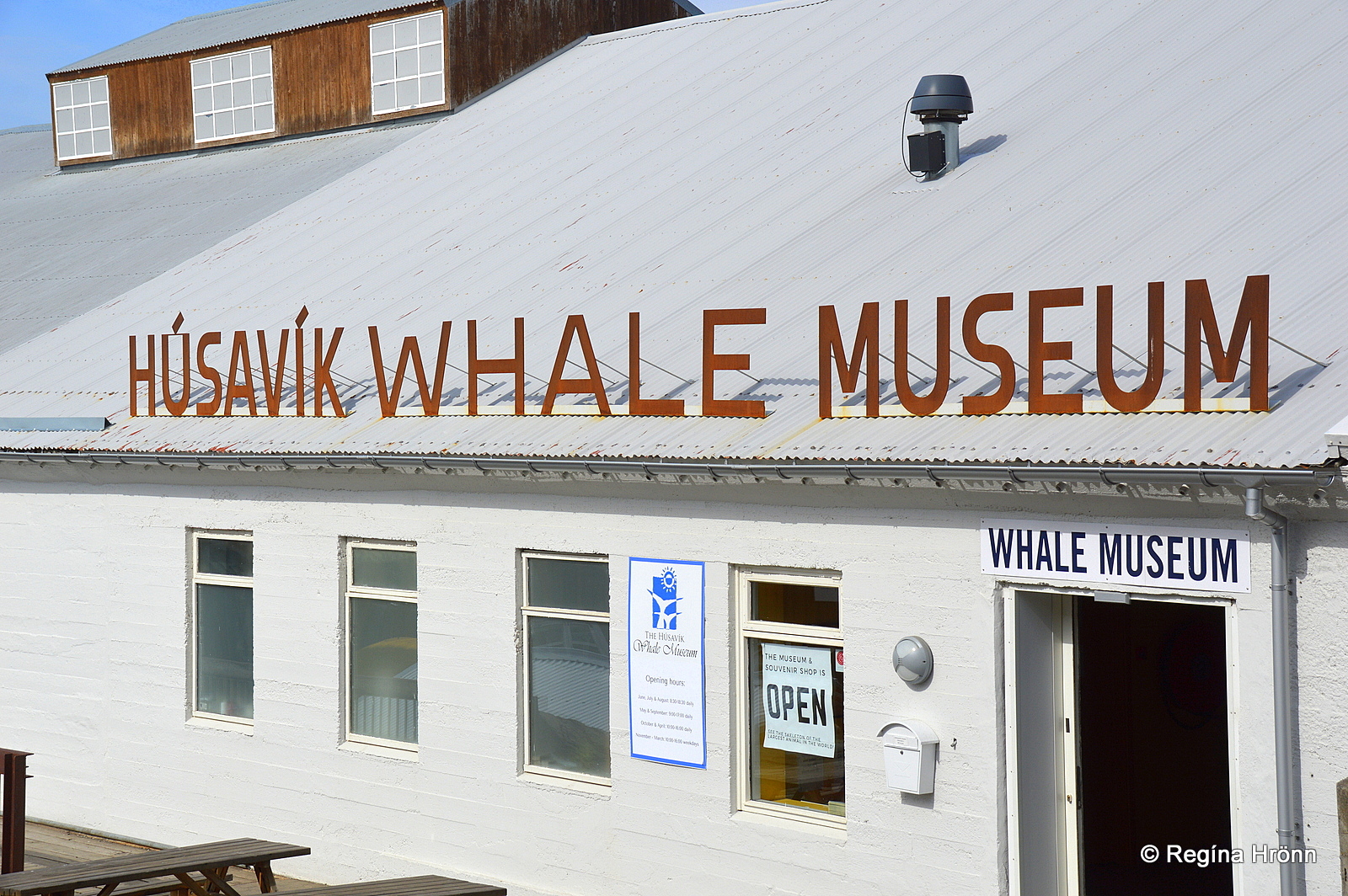 The Whale Museum in Húsavík

The Húsavík Whale Museum has got 11 whale skeletons on display and 3 whale documentaries in 8 exhibition rooms.

Of interest is the Whale walk, where you walk between the skeletons of several whale species.

Amongst the whale skeletons is a huge skeleton of the Blue whale, the biggest of all mammals. It is so big that I could only take a photo of a part of it.

All of these skeletons are real skeletons from beached whales around Iceland. 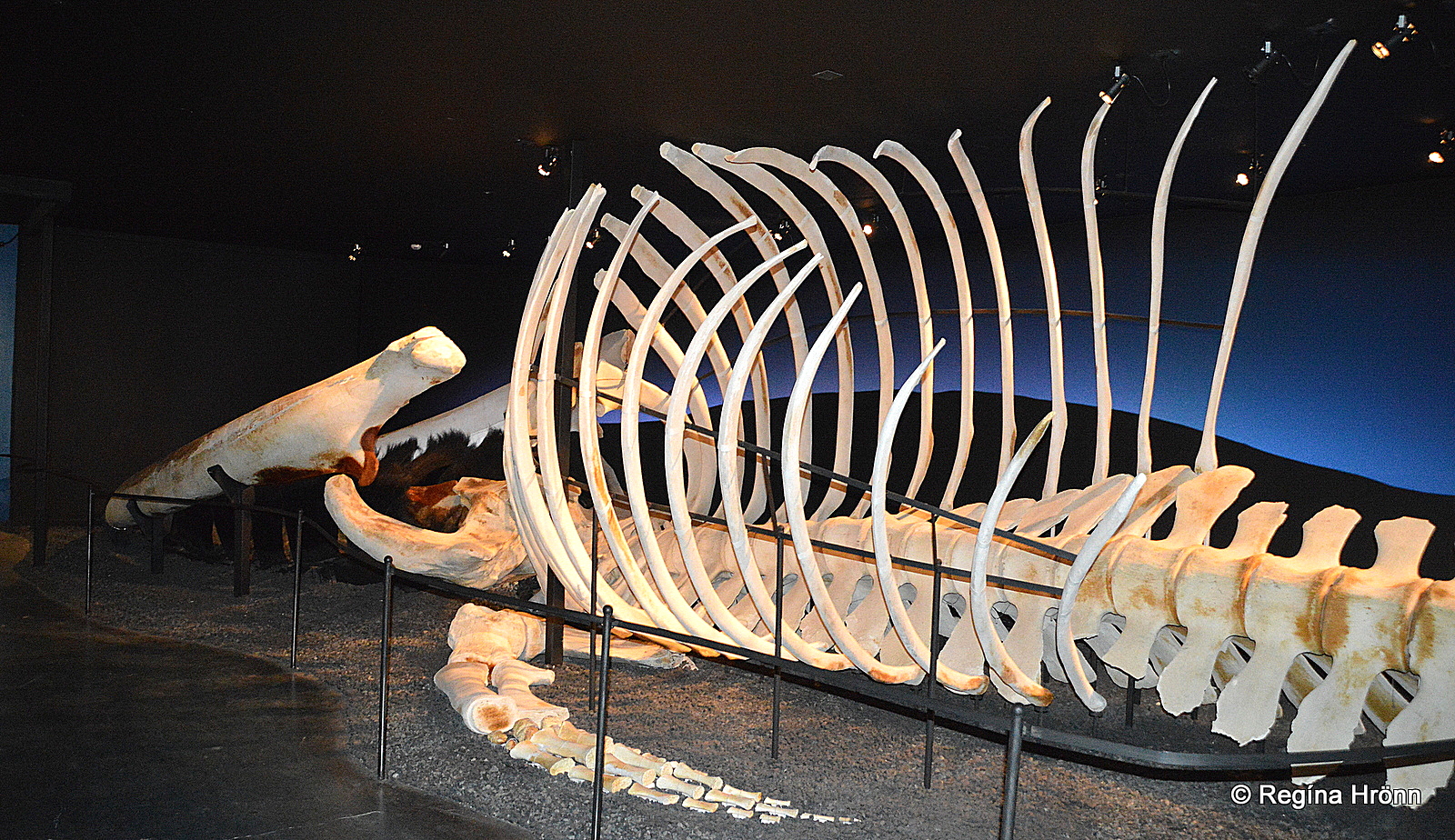 Parts of the skeleton of a Blue whale

Blue whales are spotted from time to time on the Skjálfandaflói bay. Iceland and the Azor islands are seemingly the only places in Europe, where the Blue whales come so close to the coast.

A visit to the Whale Museum is highly recommended before joining a whale watching tour. 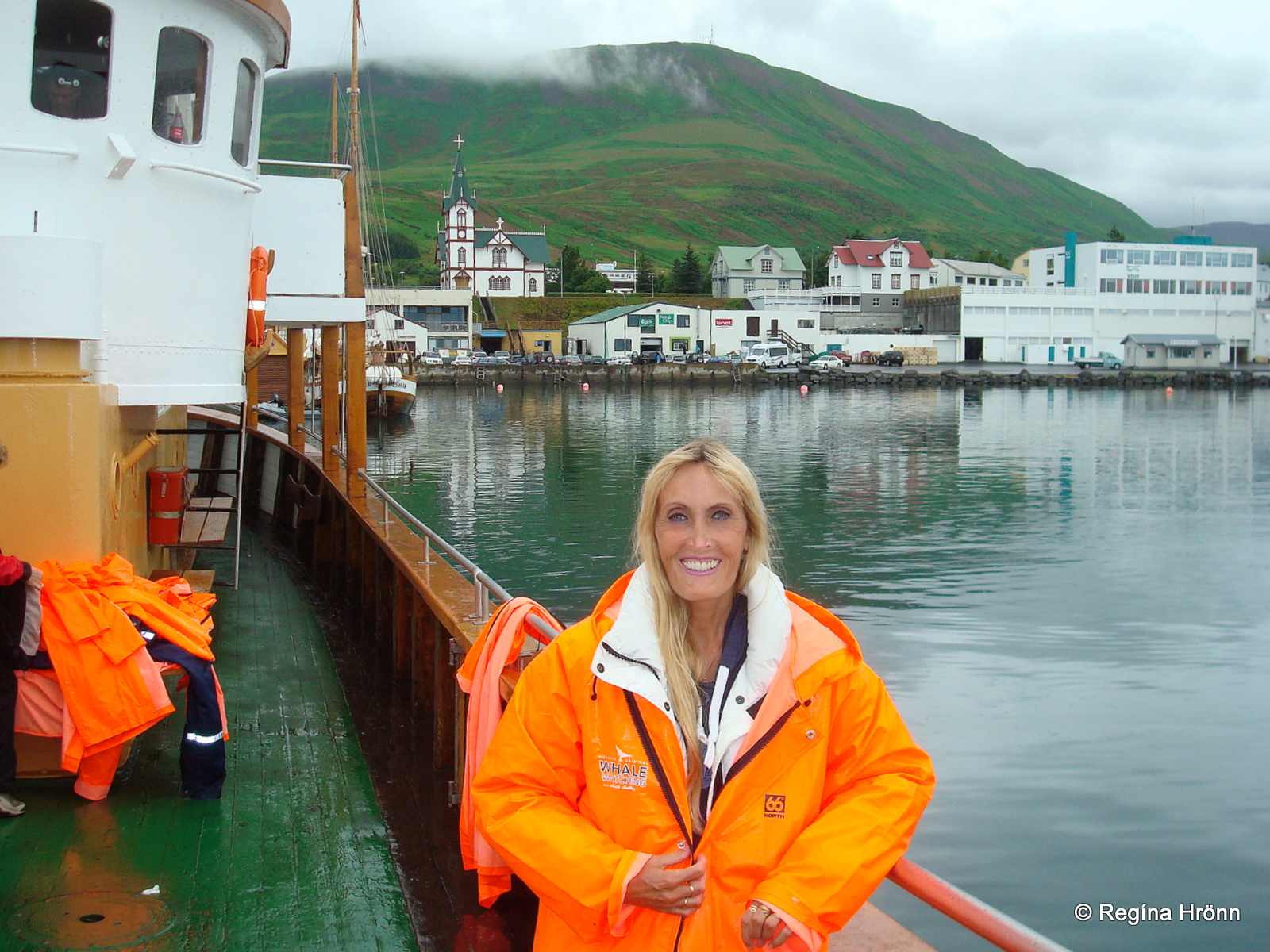 On my first whale watching tour from Húsavík

Here on the beautiful Skjálfandi bay with the snowy Kinnarfjöll mountains, the sighting rate of whales is 97-99%. 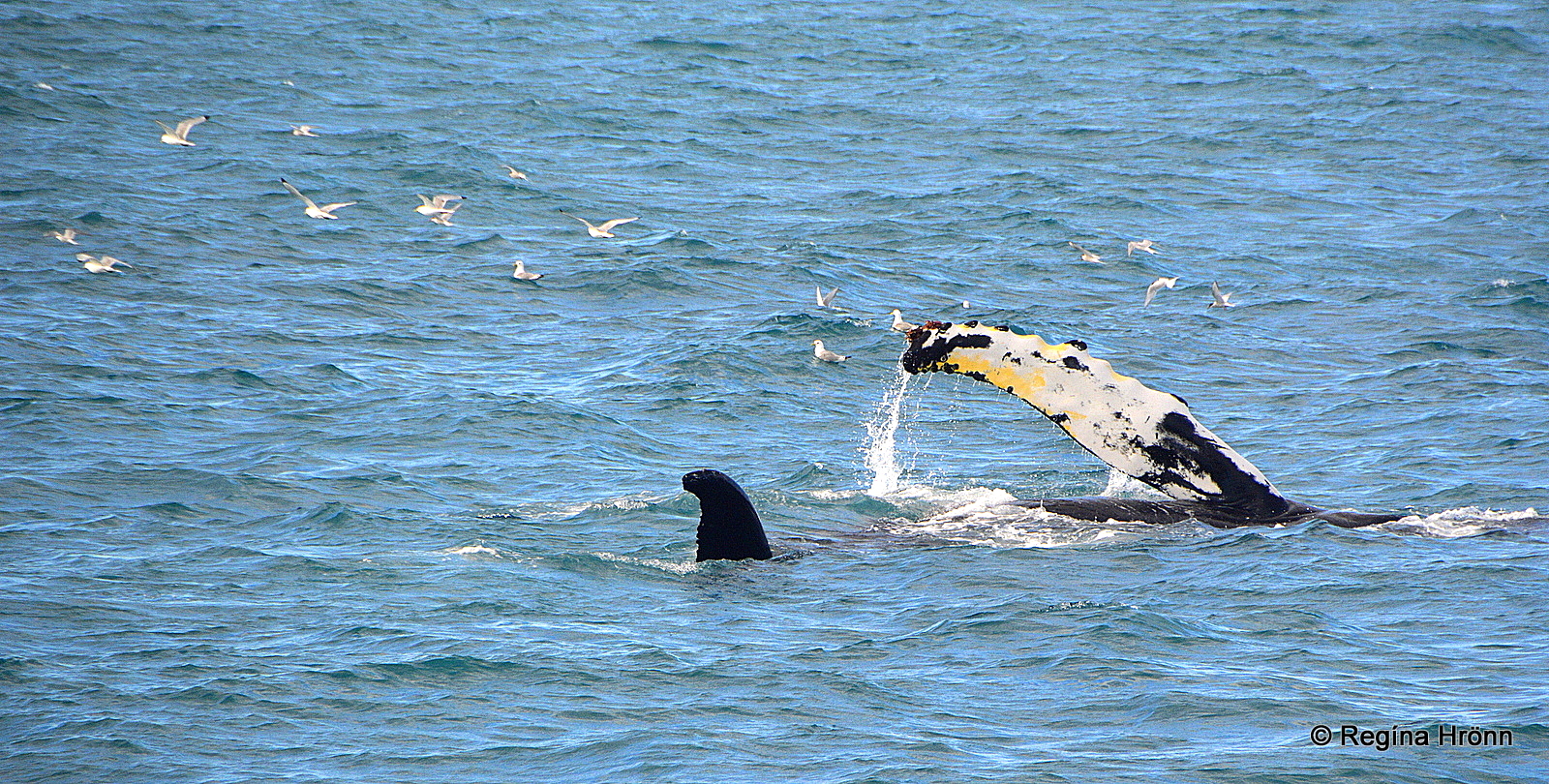 One of the most common whale species in the bay is the entertaining Humpback whales. They are often referred to as gentle giants, which is also the name of one of the whale watching tour operators.

It is called the most entertaining of whales as it often puts on a display so to speak. The Humpback whales are very curious and can swim up to the boat to have a look at us while we are watching them in awe 😉

The humpback whales weigh from 25-40 tonnes, but these gentle giants pass us gracefully and slap their fins as if they are waving to us. 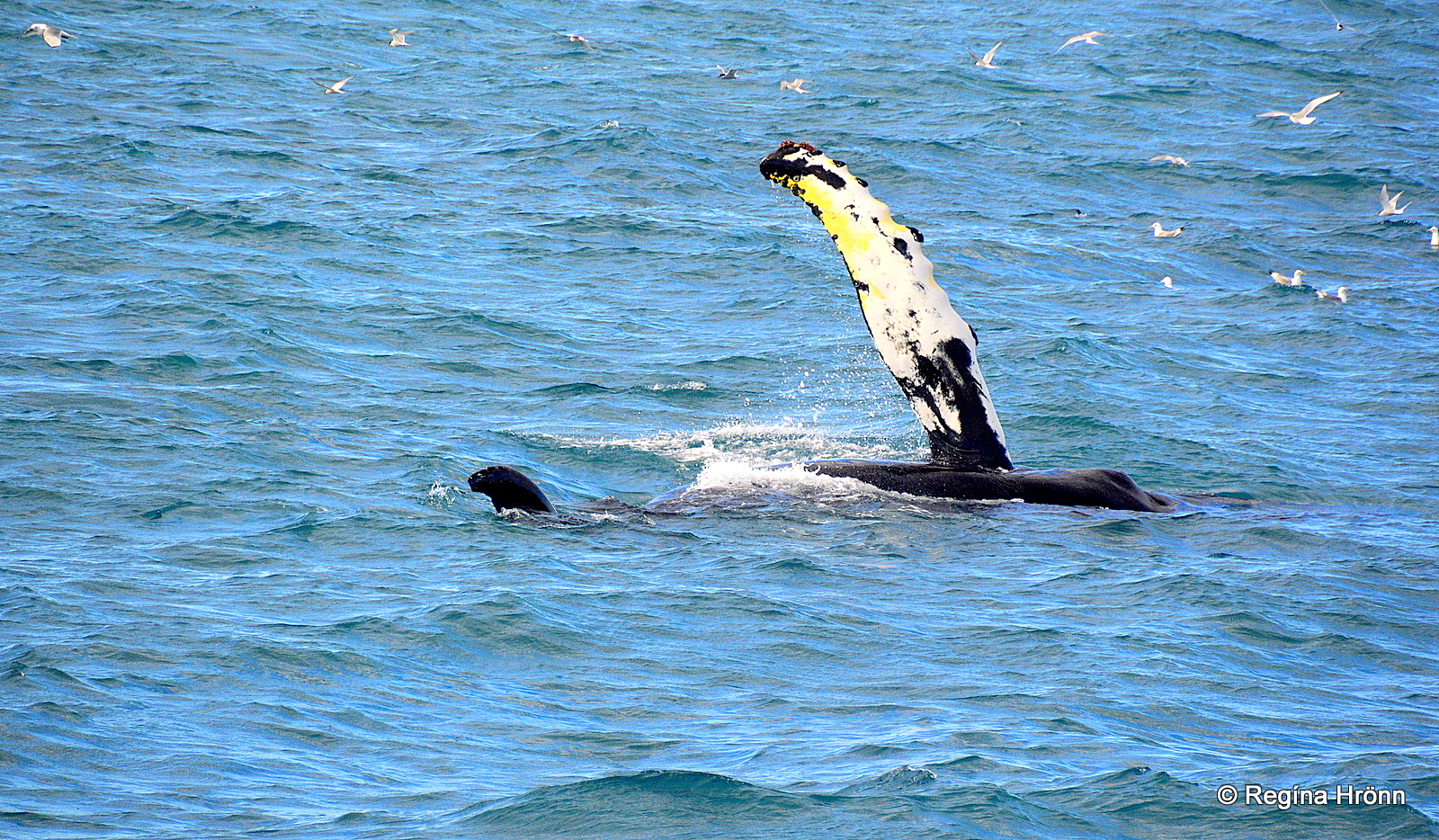 Not to mention the majestic sight of a humpback whale breaching – i.e. jumping in the air. There is nothing like it!

I have twice seen a humpback whale breaching in the distance and I was in awe, I felt like a little kid I was so excited 😀

The most common sight though is when the whales fluke, i.e. they lift their fluke high in the air when they gracefully dive.

On many of the whale watching tours I have joined we were asked to send in our photos of the whales fluking as the tour guides know the whales from their fluke, which is like their fingerprint. 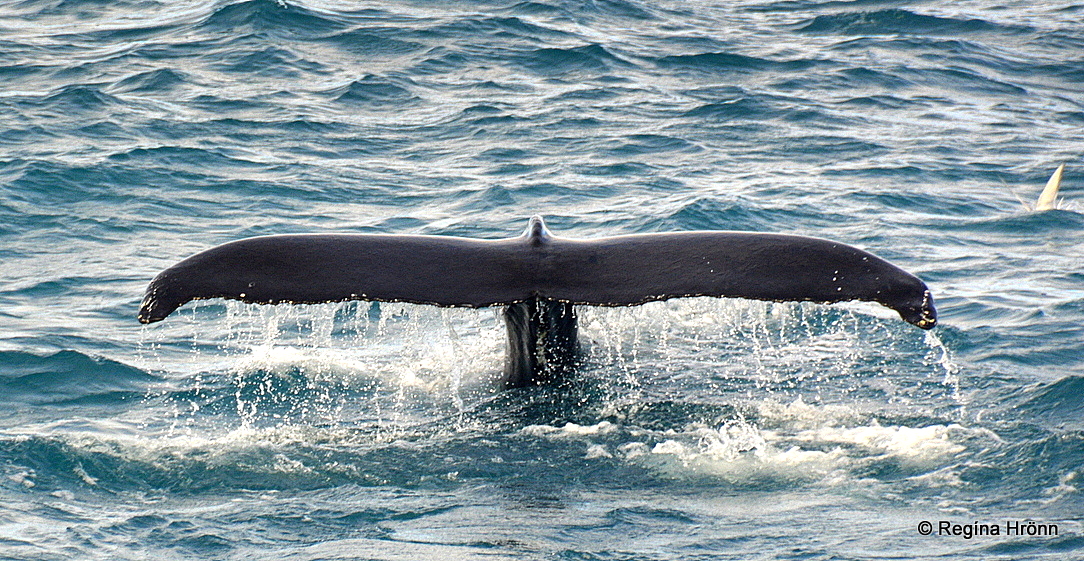 A whale fluking before it dives

The humpback whale is not the only whale in Skjálfandi bay, as here we might also see Minke whales, Harbour Porpoises, which is the smallest of the whales, White-beaked dolphins, and on occasion the Blue whales.

Two puffins floating on the sea

This beautiful bird with its colorful beak has become so popular amongst tourists that it has almost become Iceland’s national bird. 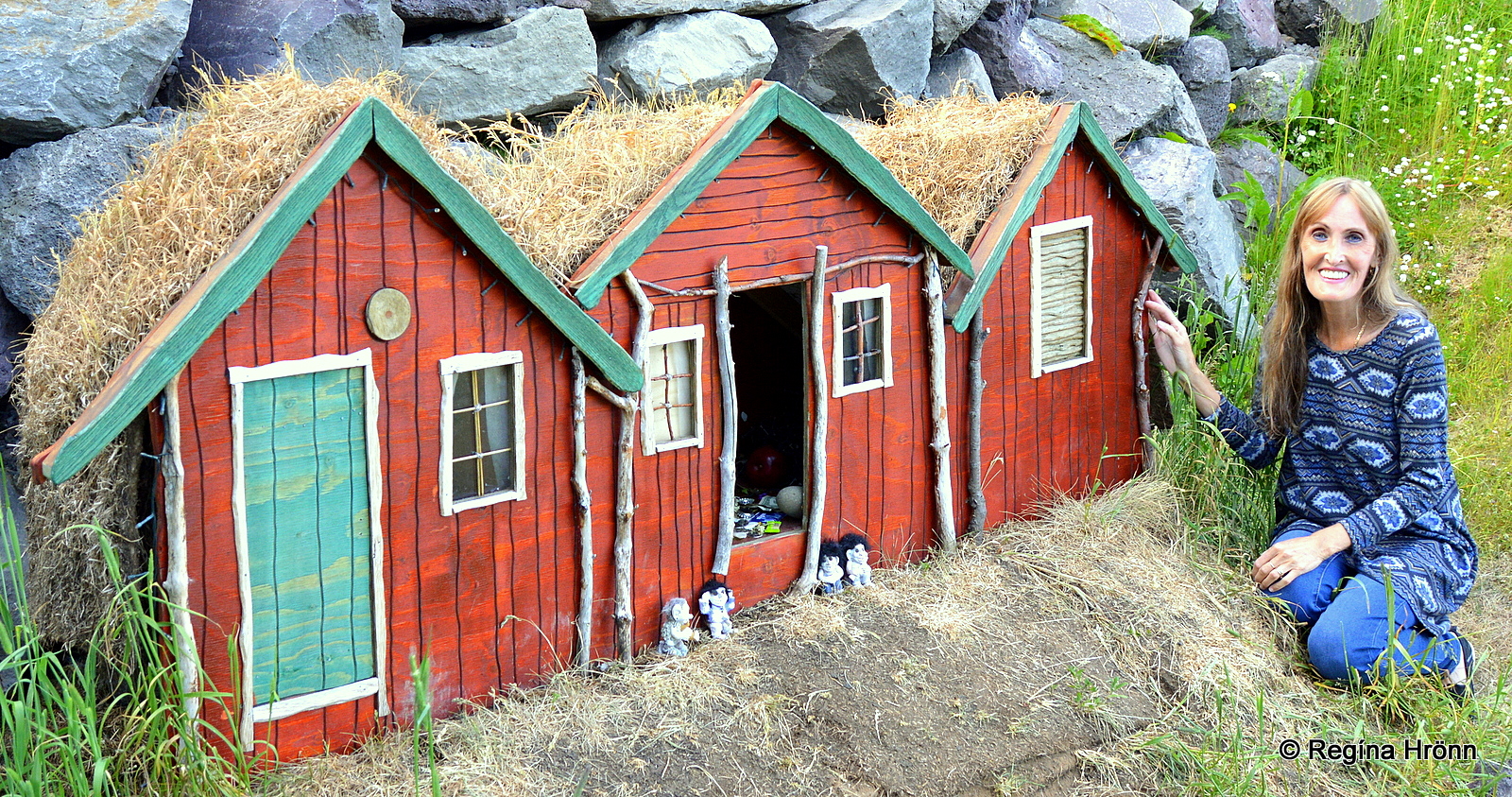 A replica of the elf house from the Eurovision film

Húsavík has become well-known for the 2020 movie the Eurovision Song Contest: the Story of Fire-Saga starring Will Ferrell, Rachel McAdams, Pierce Brosnan amongst others. Many Icelandic actors appear in the film.

Many of our foreign visitors, who have watched this funny comedy are now eager to visit Húsavík, where parts of the movie were filmed.

Next to the bar you can visit a replica of the elf-house in the movie, but the Icelandic elves had a very important role in the movie. Visitors have started leaving coins and all kinds of small items for the elves 🙂 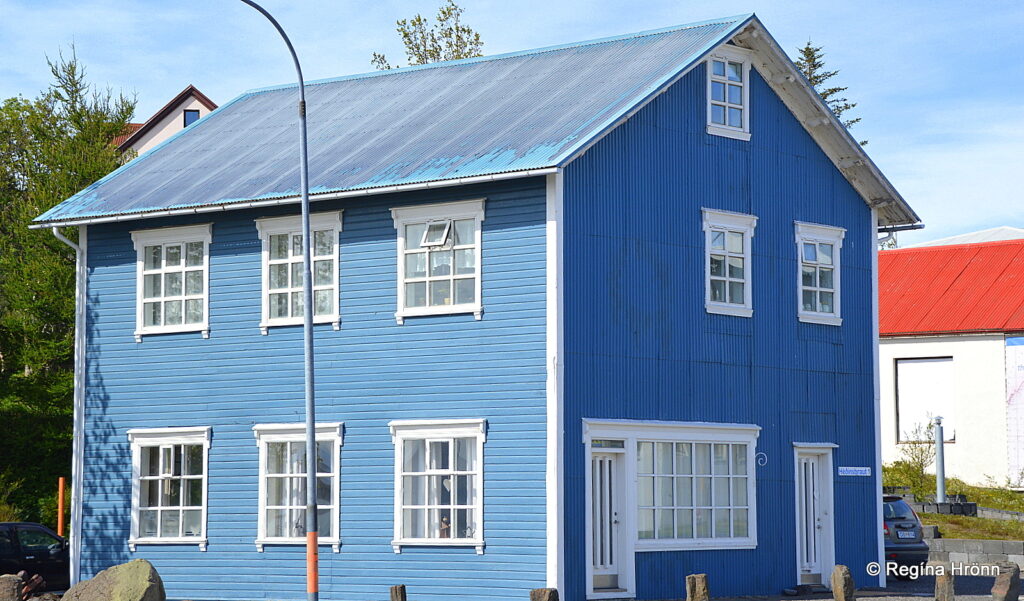 The blue house from the Eurovision film

You can also see the blue house in Húsavík from the film, but the bus stop is not a permanent fixture and was added by the harbor for the filming of the Fire Saga film.

The beautiful song “Húsavík – my home town”, received an Oscar nomination for the best original song in a film.

Below is the video recorded at Húsavík with Molly Sanden and local girls from Húsavík performed live at the Oscars Pre-show. All of the girls are wearing hand-knitted woolen sweaters, which are very popular here in Iceland.

On the edge of Húsavíkurhöfði cape, 49 meters above the sea level, you will find the geothermal sea baths Geosea, which opened in 2018.

The sea baths are a great addition to Húsavík and are immensely popular. 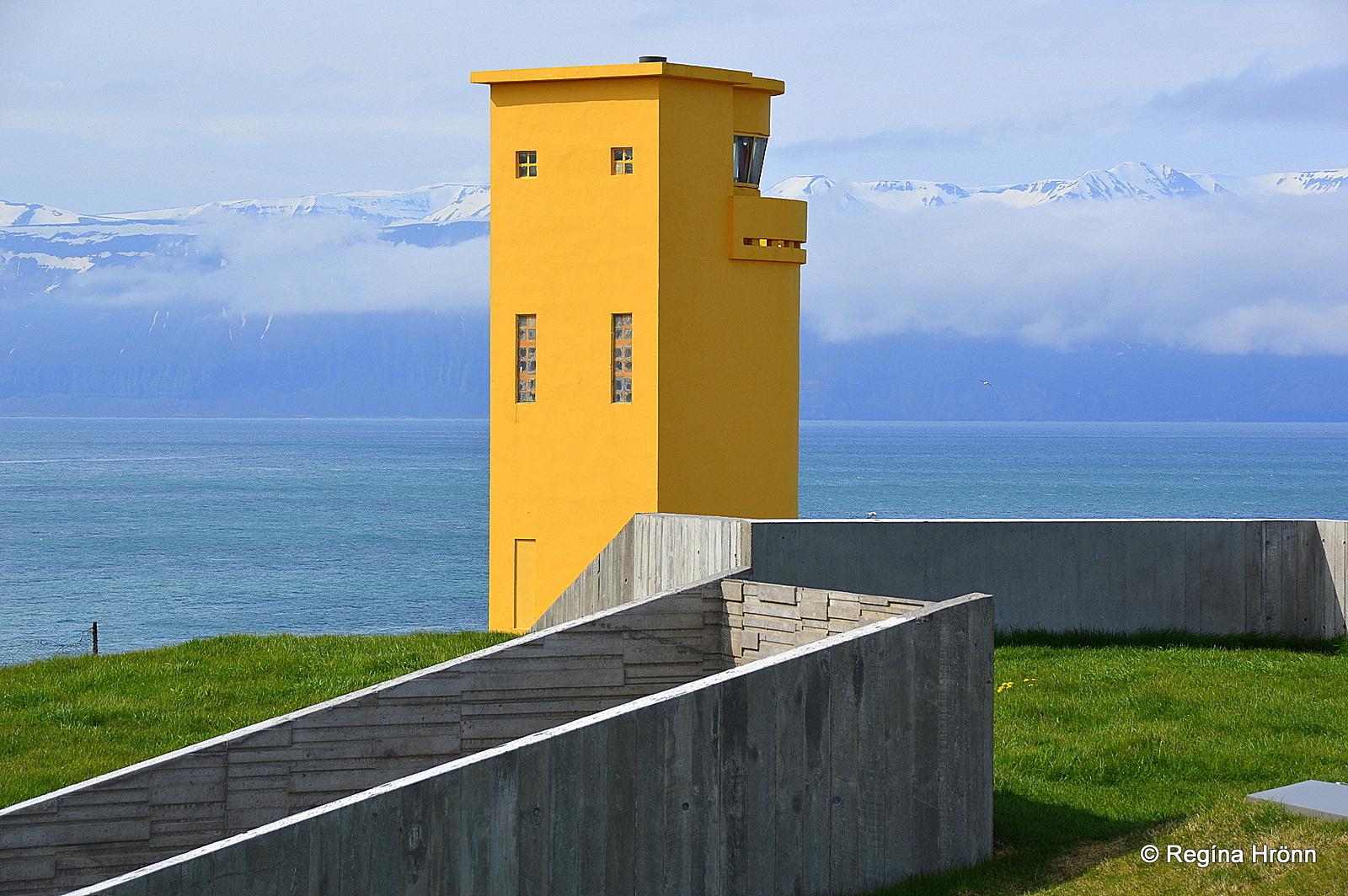 Geosea, geothermal baths have an infinity view, and it is wonderful soaking in one of the hot tubs watching the whale watching boats and fishing vessels sail by on the Skjálfandaflói bay. 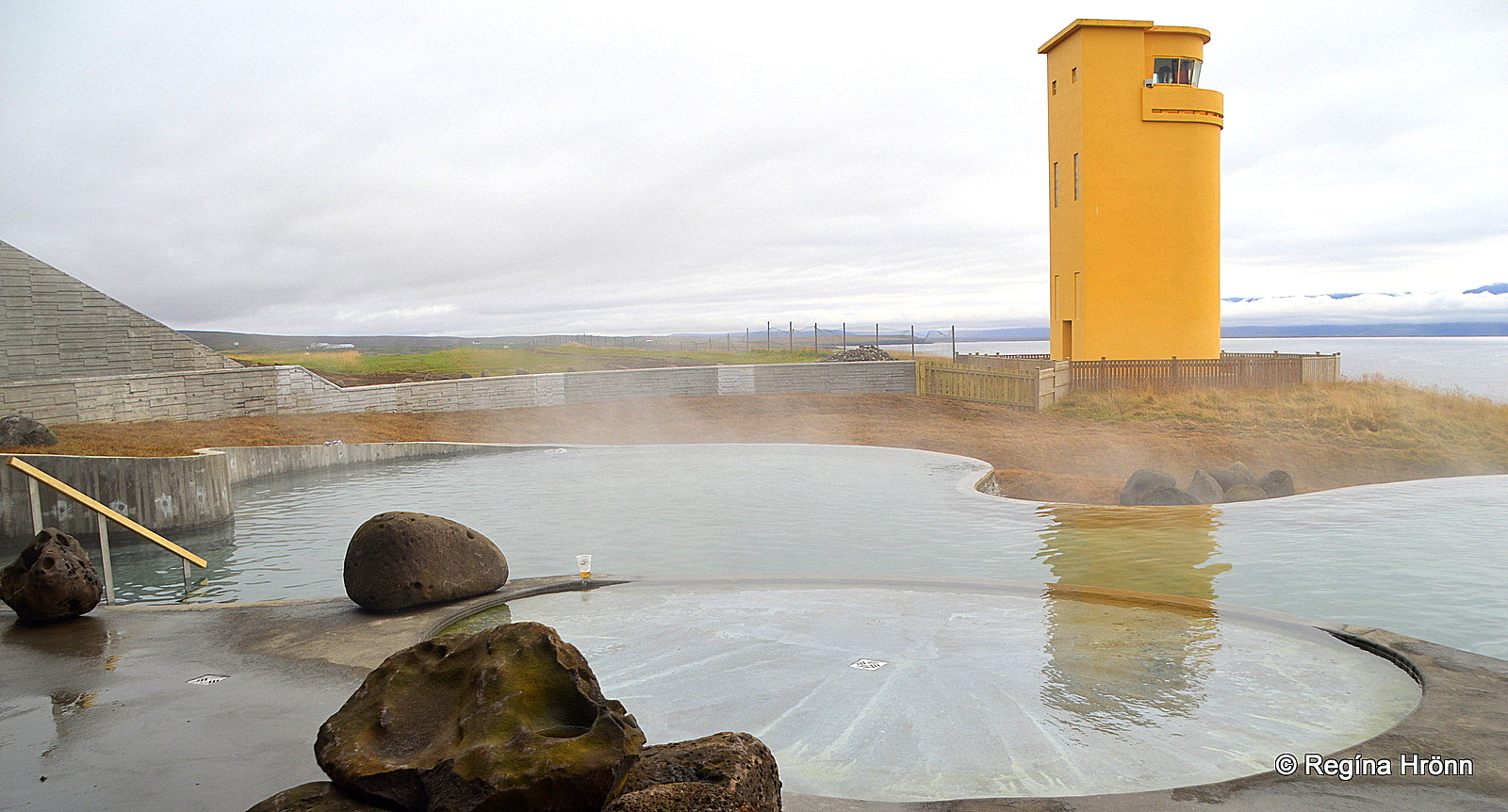 Húsavík is an hour’s drive from Akureyri – the magical Capital City of North-Iceland, but before we visit Akureyri let’s explore 3 more stops on the Diamond Circle.

Our next stop will be at Mývatn, which is often called the Northern Lights Capital of Iceland.

Have a lovely time at Húsavík 🙂