Ásbyrgi - the Shelter of the Gods is one of the most magical places in Iceland. It is located in the northernmost part of Vatnajökulsþjóðgarður National Park in North-East Iceland. 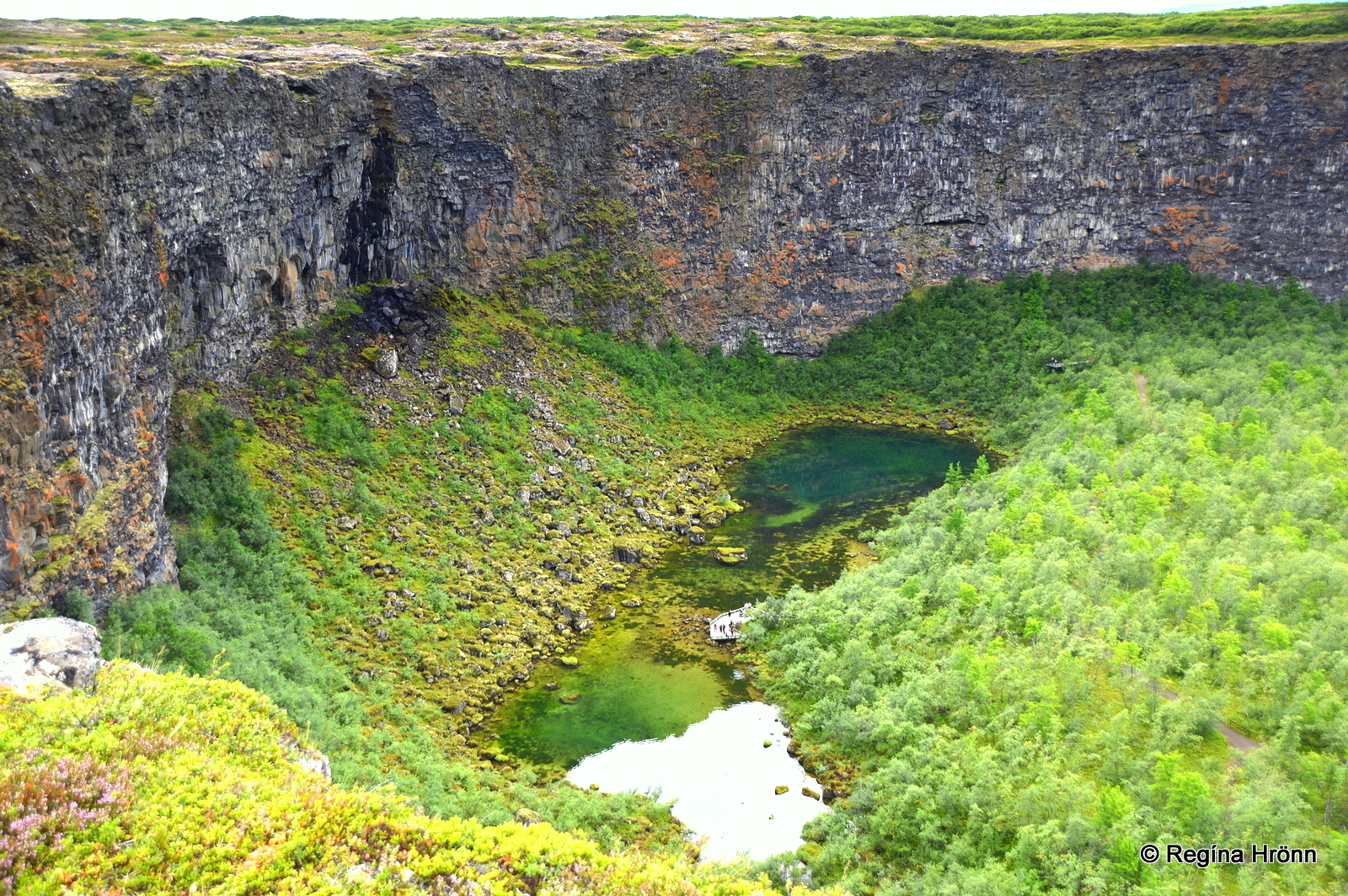 In my last 2 travel blogs, I showed you some of the pearls of Jökulsárgljúfur canyon. We have by now reached the end of road number 862 and are on road 85 in Kelduhverfi.

The most spectacular attraction in this area is Ásbyrgi, my favorite place in all of Iceland. 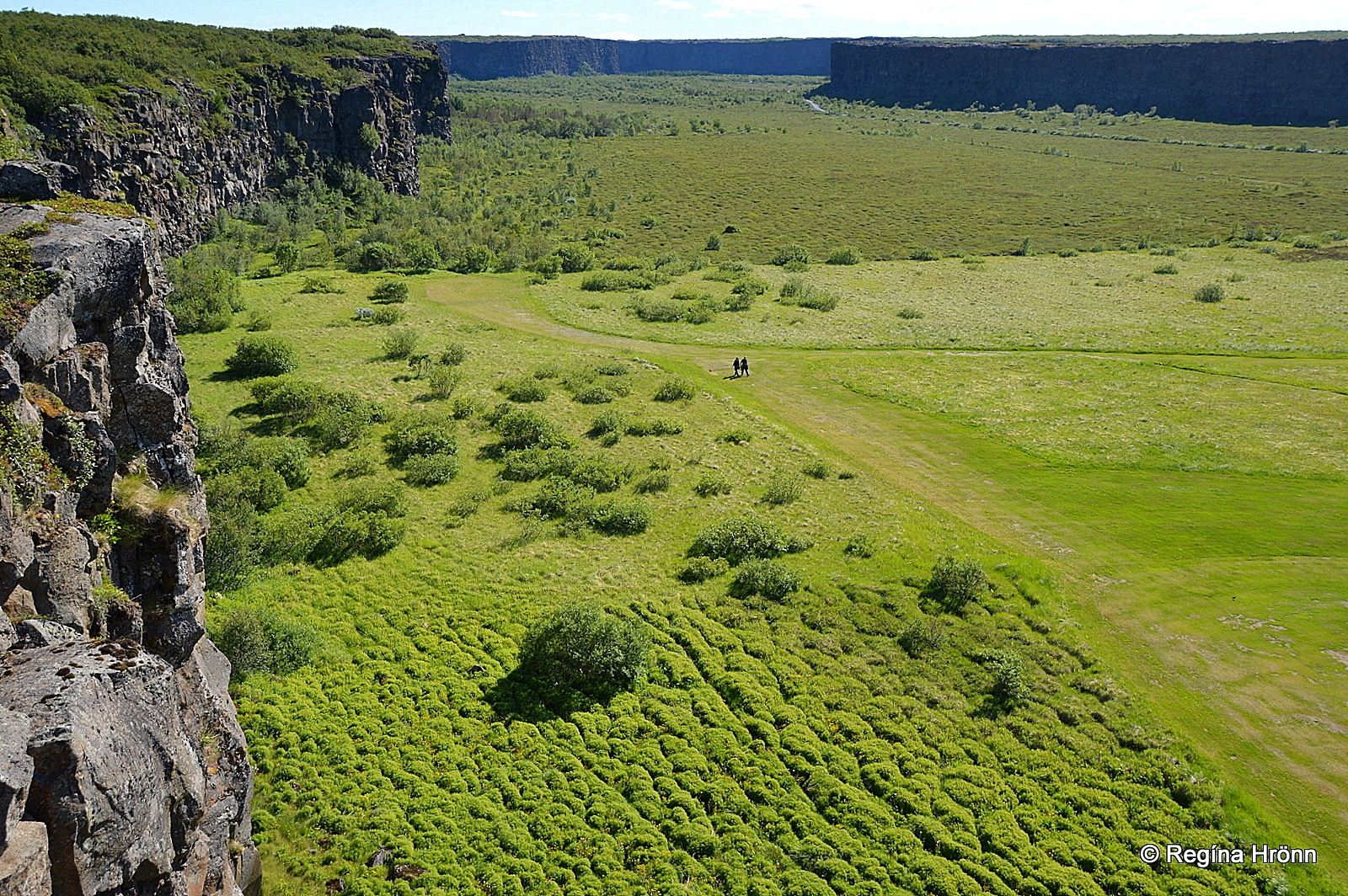 Ásbyrgi as seen from above

The horseshoe-shaped Ásbyrgi canyon has belonged to the Jökulsárgljúfur National Park since 1978, but the National park was established 5 years earlier, in 1973.

Ásbyrgi canyon is 3.5 km long and 1.1 km wide with up to 100 meters high sheer cliff faces, a true wonder of nature. 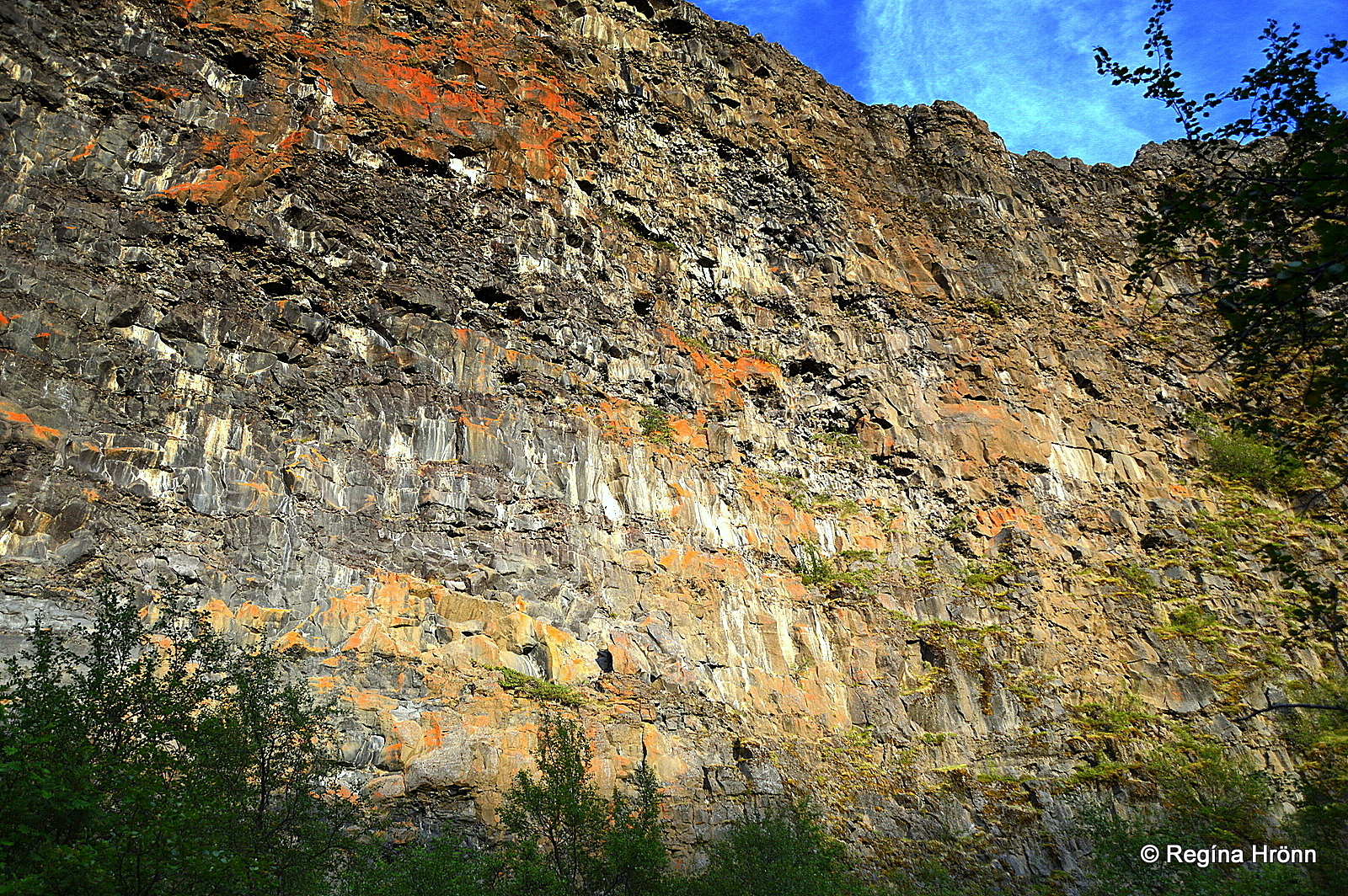 Ásbyrgi literally means the Shelter of the Gods and according to Norse mythology, the king of the Norse gods, Óðinn was once riding his flying 8-legged horse, Sleipnir, in this area.

Sleipnir put one of its hoofs down and created Ásbyrgi, which explains why Ásbyrgi is in the shape of a very big horseshoe. 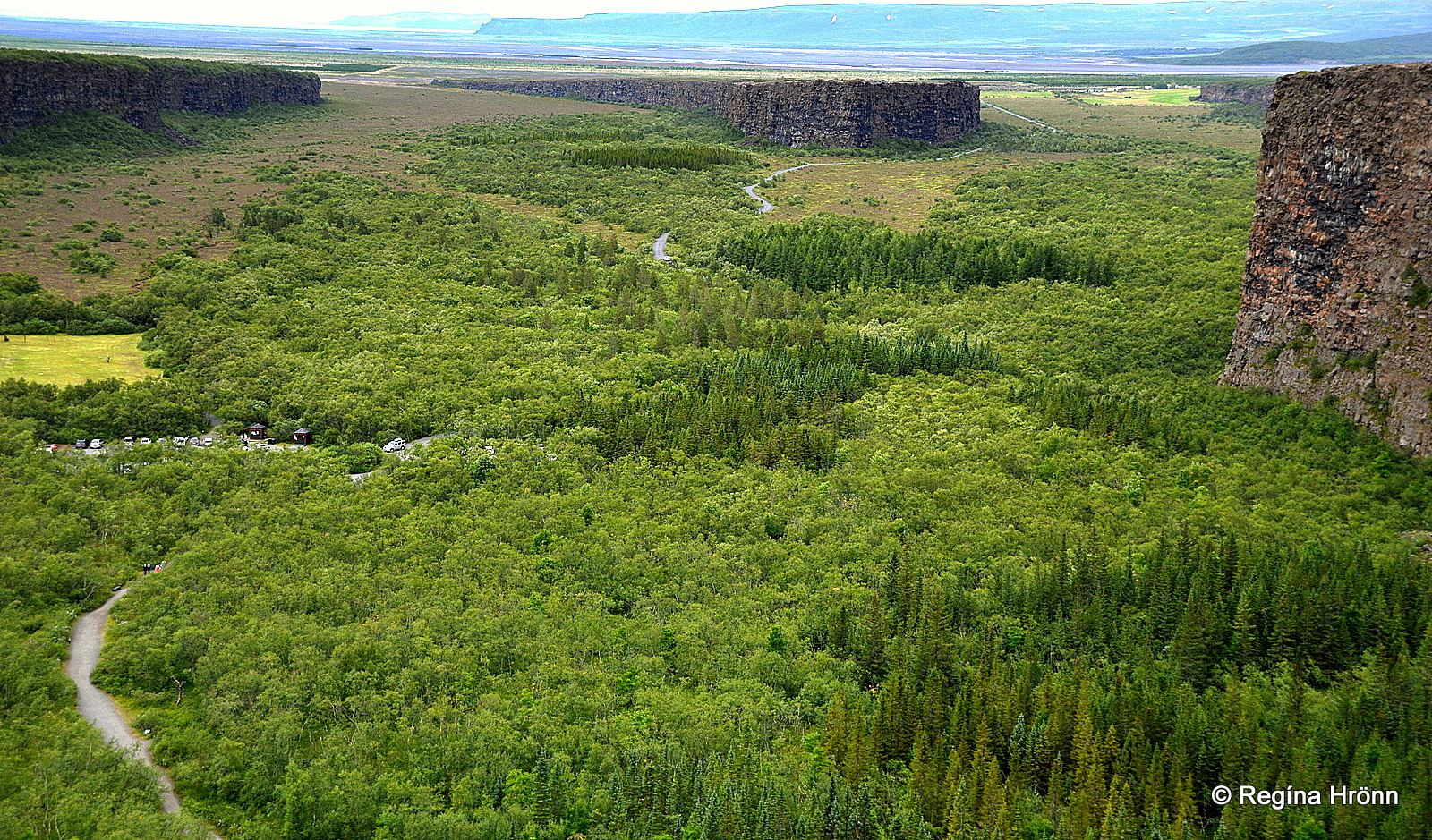 The geological explanation is the same as I showed you in Hljóðaklettar in Jökulsárgljúfur canyon, where a catastrophic flood in Jökulsá á Fjöllum glacial river 2,500-3,000 years ago washed the volcanic material away leaving only behind the volcanic plugs at Hljóðaklettar.

The glacial river originates in the Vatnajökull glacier, Europe’s largest ice cap by volume, and the glacial bursts from eruptions in sub-glacial volcanoes are massive, leaving destructions in their wake. 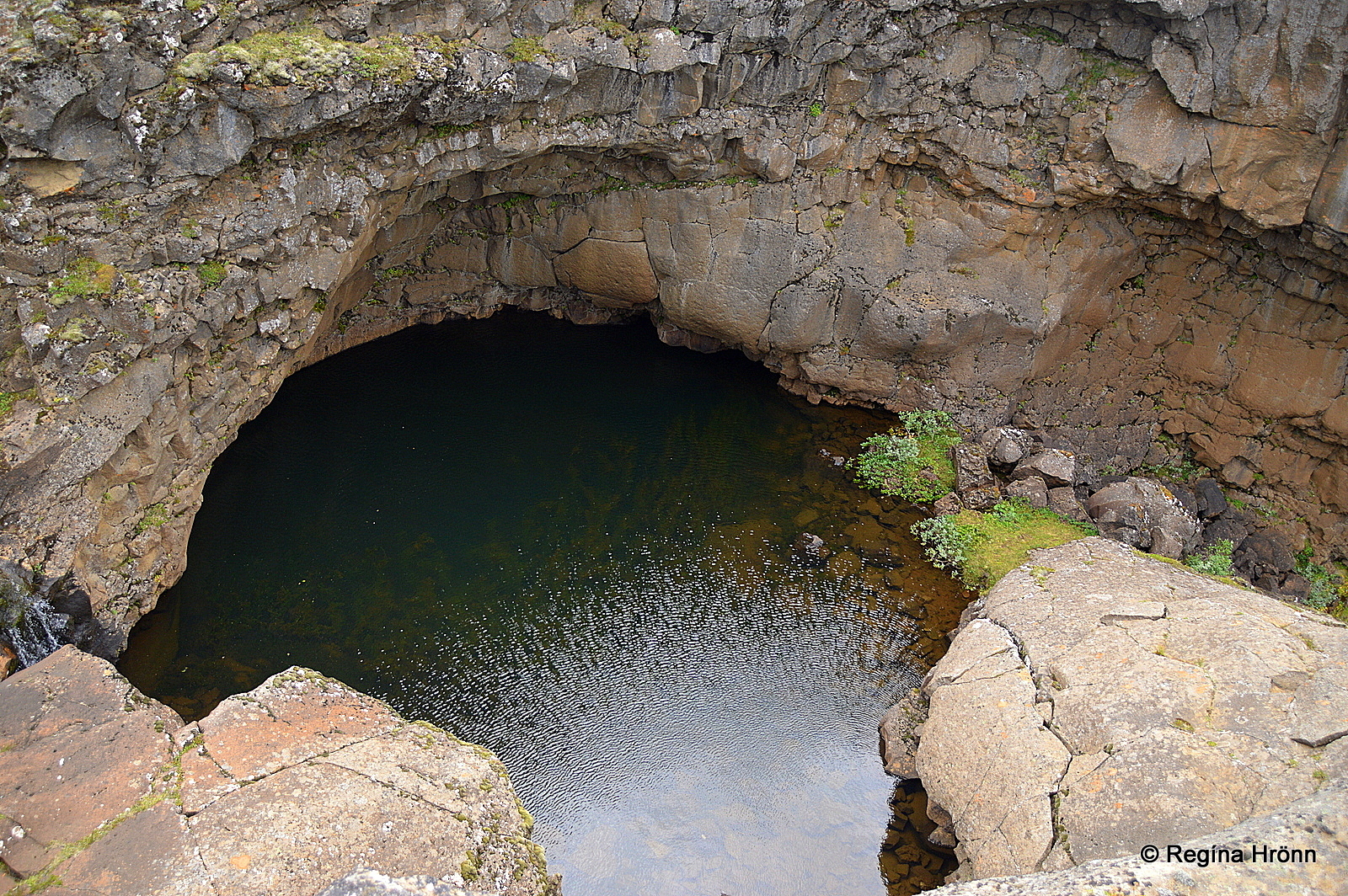 The river bed of the turbulent Jökulsá á Fjöllum has moved further east of Ásbyrgi, so it now runs beside it and not through it.

The lava field, Stóravítishraun, in this area came from the Stóravíti eruption and formed one of the largest shield volcanoes in Iceland Þeistareykjabunga (Stóravítisdyngja) some 11,000-12,000 years ago shortly after the retreat of the ice age glaciers.

If you go on a hike on the cliff Eyjan in Ásbyrgi or walk along the rim of Ásbyrgi canyon you will see sheepbacks and potholes, which serve as a reminder of the glacier which once covered this area and the catastrophic floods in the glacial river Jökulsá á Fjöllum. 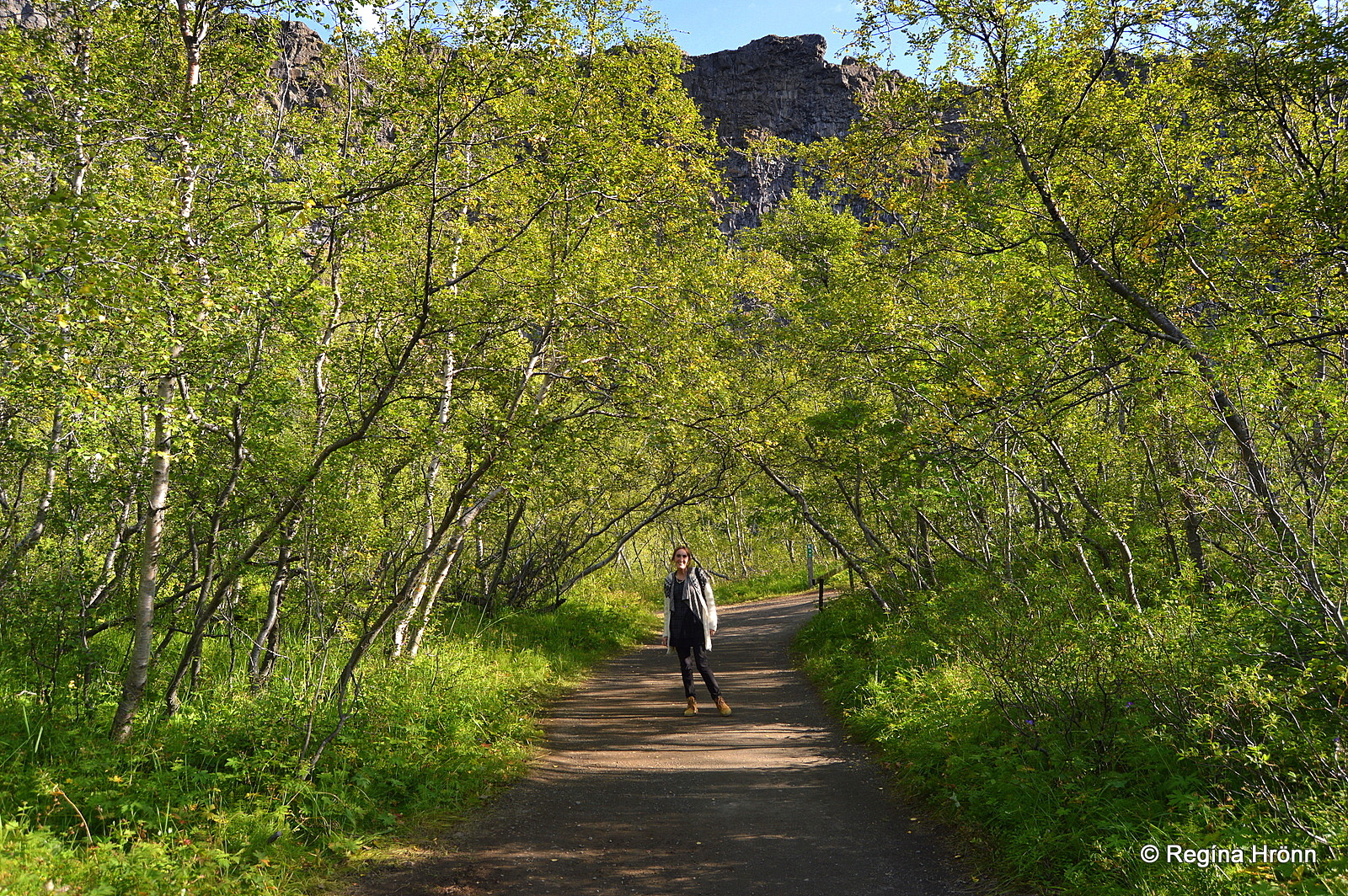 The birch trees are getting taller and taller in Ásbyrgi

Ásbyrgi is not only rocks and lava, but a true oasis, with lush vegetation – here you will find willow, mountain ash, birch, and planted pines in abundance.

The State bought Ásbyrgi back in 1927-1928 and put the supervision in the hands of Skógræktarfélag Íslands – the Icelandic Forestry Association and as such the forest is a national forest.

The Forestry Association planted thousands of trees in Ásbyrgi in the last century. 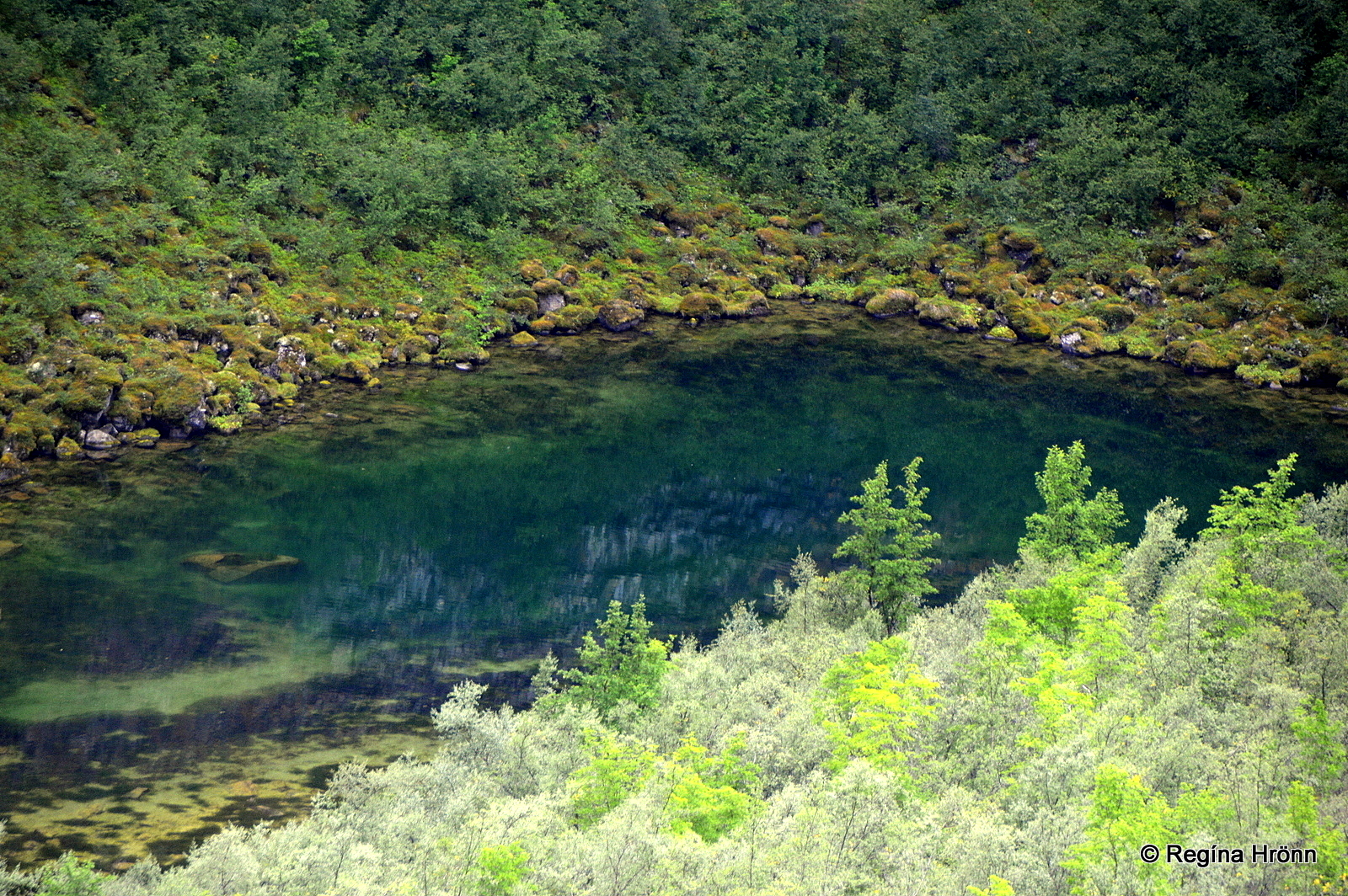 Trees in abundance by Botnstjörn pond

But the trees have grown quite tall in Ásbyrgi in the last decades as is evident when you look at the treetops from above when hiking on the rim of Ásbyrgi. Or at least we Icelanders think that they are tall 🙂 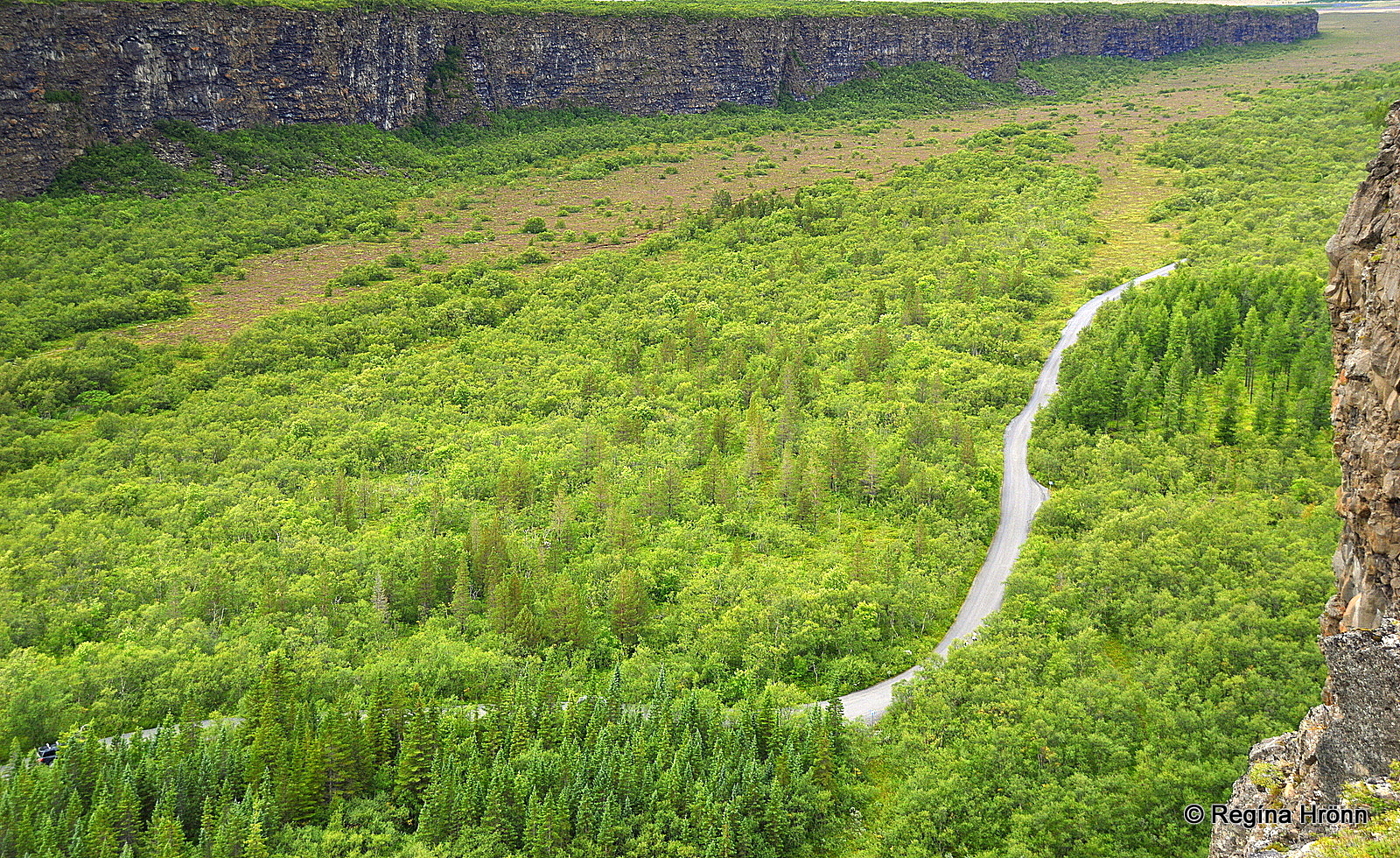 Ásbyrgi is not only related to Norse mythology, but it is also considered to be the capital city of the Elves – the Hidden People of Iceland and psychic people have seen many homes, public buildings, and concerts halls belonging to the elves in the cliffs.

Icelandic folklore is filled with stories about encounters with the Hidden People, and this belief is deep-rooted in our culture. 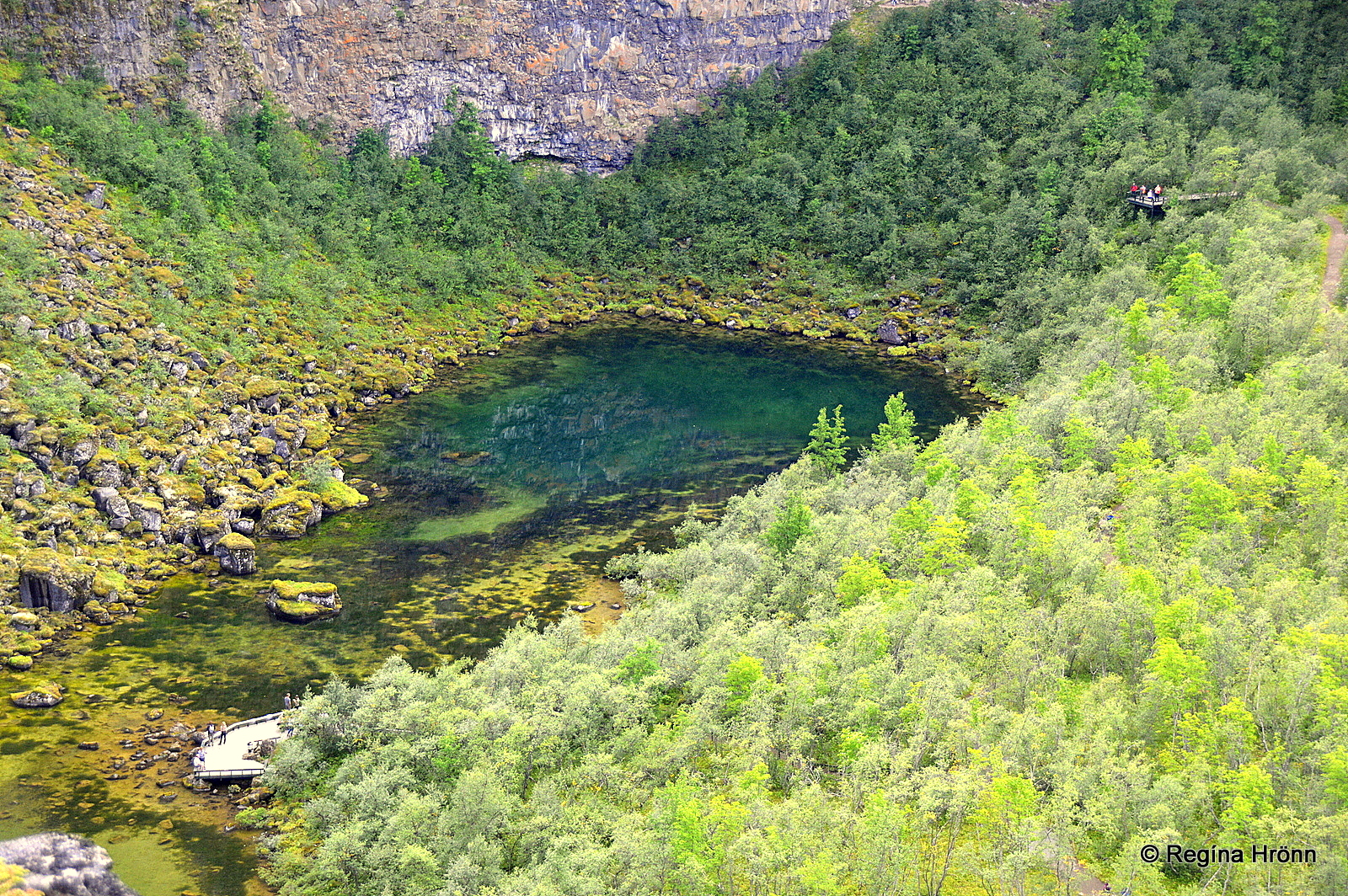 Here you can see both the observation platforms at Botnstjörn pond

There are several interesting hiking trails in Ásbyrgi, the most popular one leading to the beautiful Botnstjörn pond, the pearl of Ásbyrgi, at the innermost end of the canyon.

It is very popular to camp at the campsite in Ásbyrgi and go on various hikes in this area. 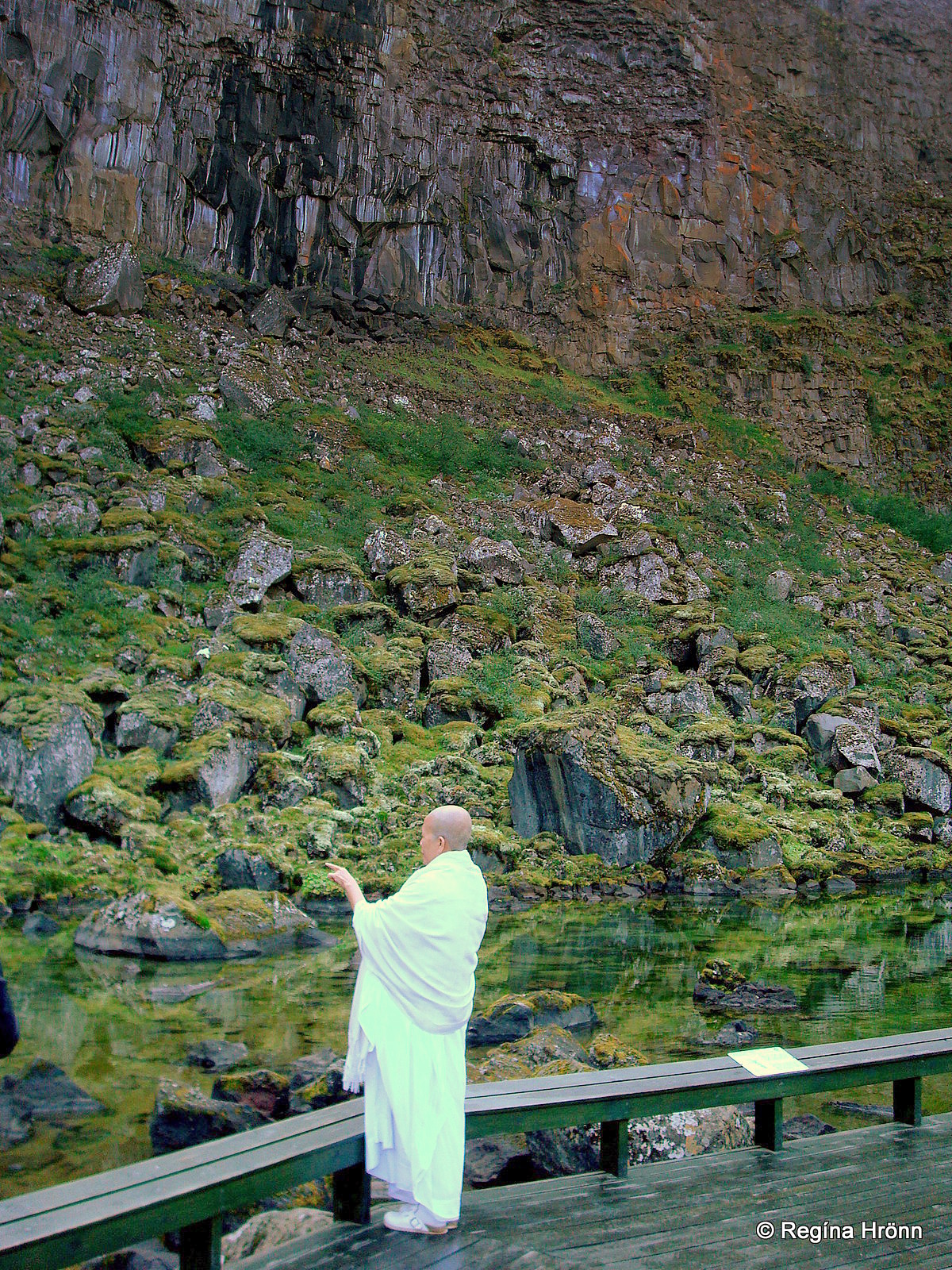 A spiritual moment by Botnstjörn

The hike to Botnstjörn pond is called Skógarstígur trail and is 3.6 km long one way, a very lovely easy hike by the cliff face, where you can see various formations, some of which look like the faces of trolls.

Here the trail leads you through a planted pine forest.

The quickest way though is to drive through Ásbyrgi and leave the car at the parking lot very close to Botnstjörn pond. And that is what most people do who are only on a short visit to Ásbyrgi. 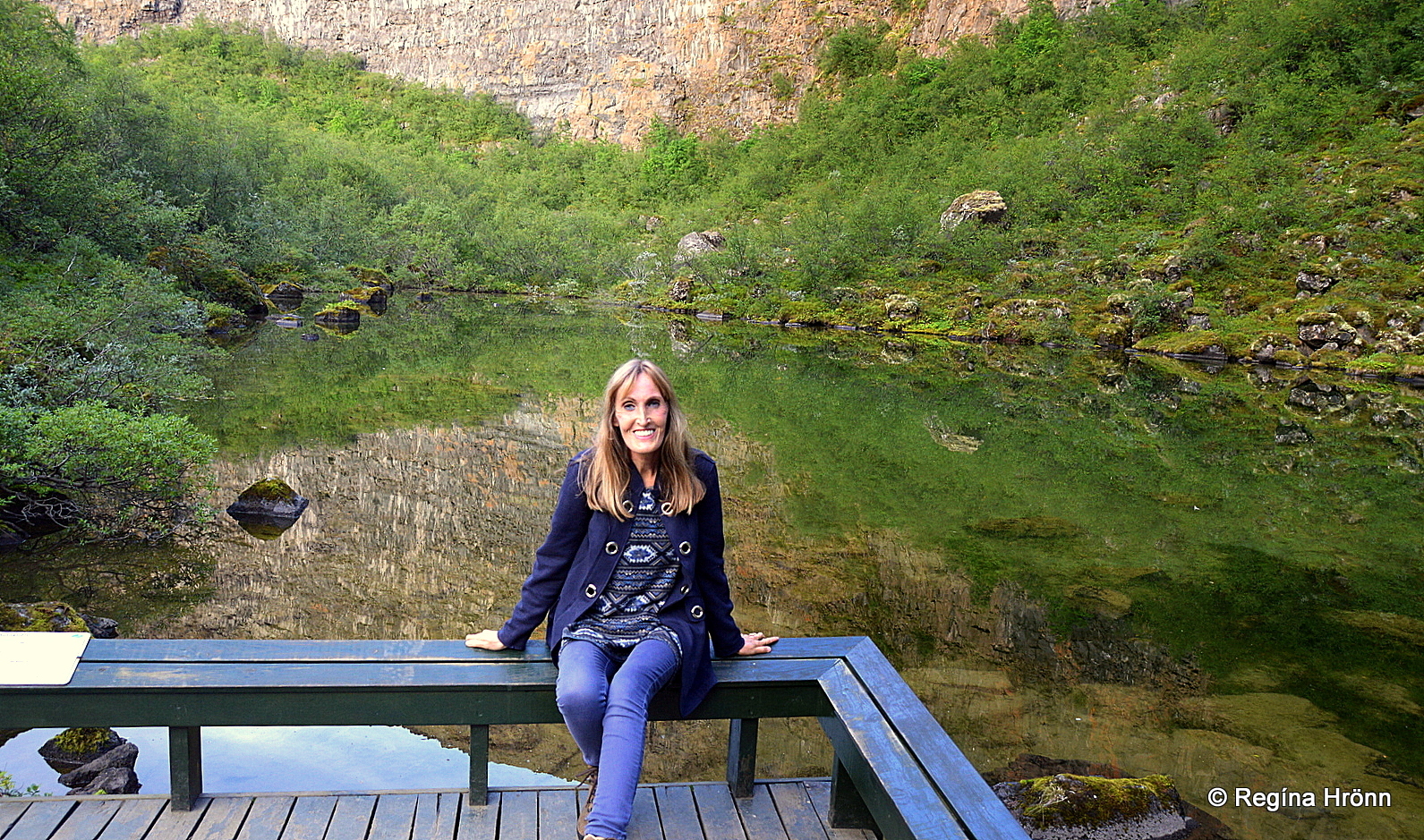 Enjoying my favorite place in Iceland

An easy hike, 0.8 km long, takes you to the pond. It is very well marked and the first sign says: “Útsýnisstaður- Botnstjörn”, but  “útsýnisstaður” is the Icelandic word for a panoramic viewpoint.

The path becomes a bit rocky though when you make the descent to the pond, with stone steps leading to the pond. Here by the pond is the lower observation platform.

This beautiful pond with lush vegetation is what is left of the massive waterfall, which cascaded from the cliffs in the catastrophic flood, which created Ásbyrgi.

In thaw, a small waterfall appears, called Botnlækjarfoss, but usually, there is only a trickling stream. 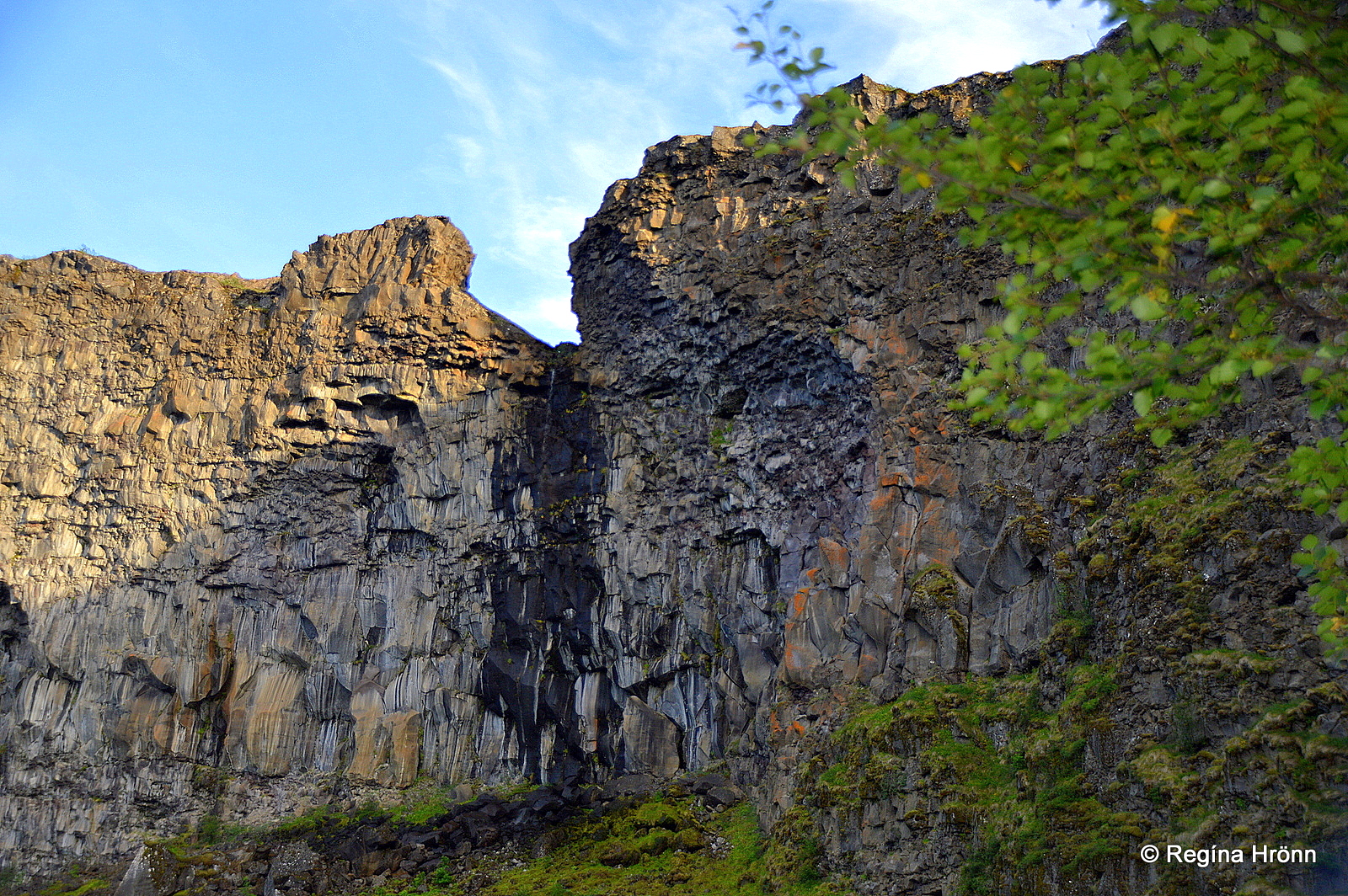 Here Botnlækjarfoss waterfall can be seen in thaw

I have visited Ásbyrgi countless times since I was a little girl, but my visits are in the middle of summer so I have never seen this waterfall. I would love to see it one day.

It is very peaceful there. Only the sounds of the Arctic fulmar, which nests in the cliffs, and the ducks can be heard.

I know people want to try out the echo here, but to me, this is kind of a holy place and I prefer the sounds of nature echoing in the cliffs.

That is why I choose to camp in Ásbyrgi during the bright summer nights.

Then I walk to the pond in the middle of the night from the campsite and to the pond and stay there alone, surrounded only by the sounds of nature.

On the pond, you will see the wigeon (rauðhöfðaönd), which is the only species of ducks nesting by Botnstjörn.

Let’s not feed them as Ásbyrgi is a part of a national park and the ducks need to be able to survive in nature by providing for themselves. 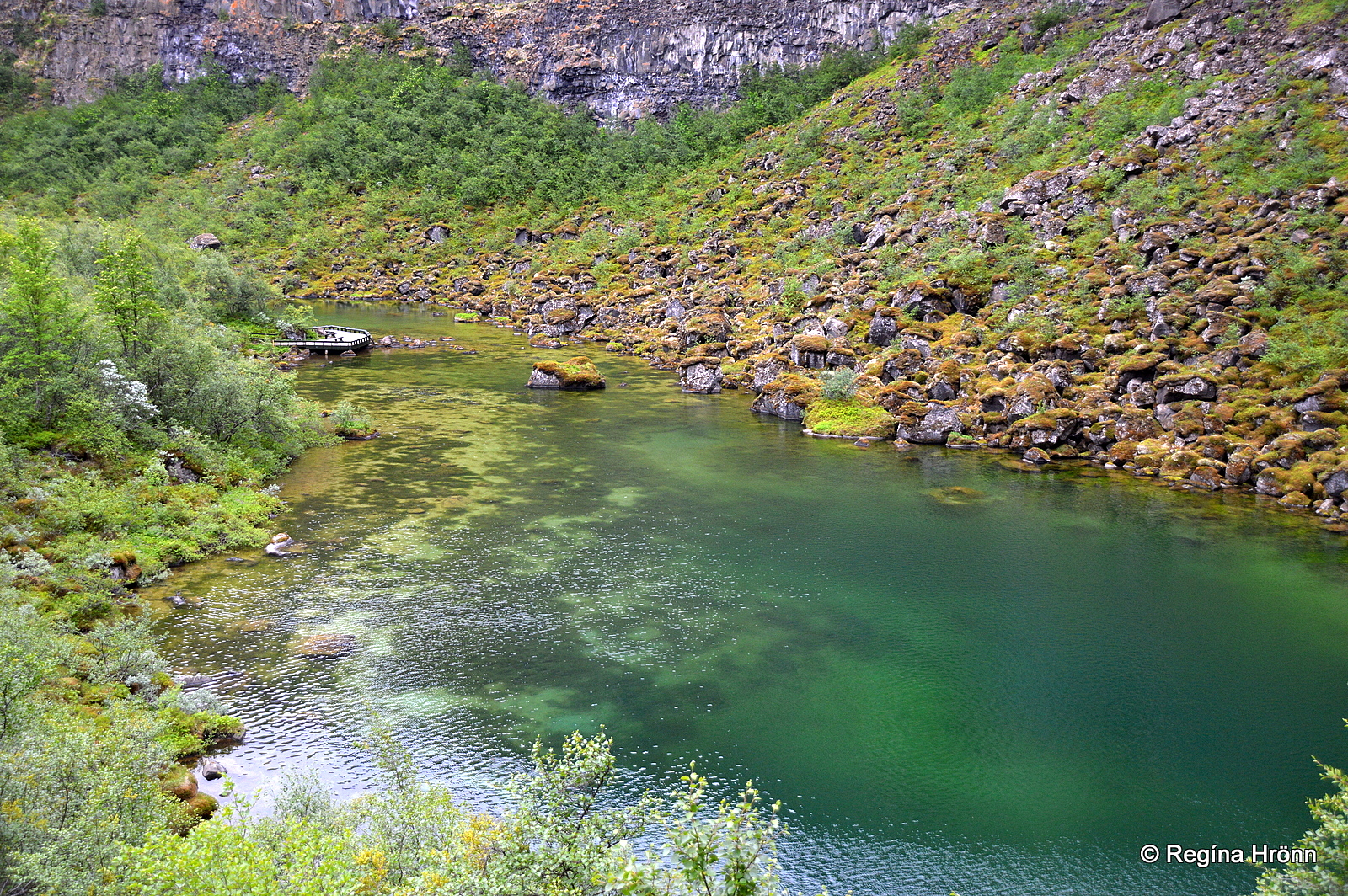 The view of Botnstjörn pond in Ásbyrgi from the upper platform

Another observation platform is higher up with a different view of this area.

To reach it you climb up stone steps and will be rewarded with a breathtaking view.

Here is a video I shot from that observation platform:

You can go higher up for an even better view, but there is no observation platform here.

The trail leads to a ledge by the rock wall called Útsýnishæð – which translates into something like the Panoramic view hill. 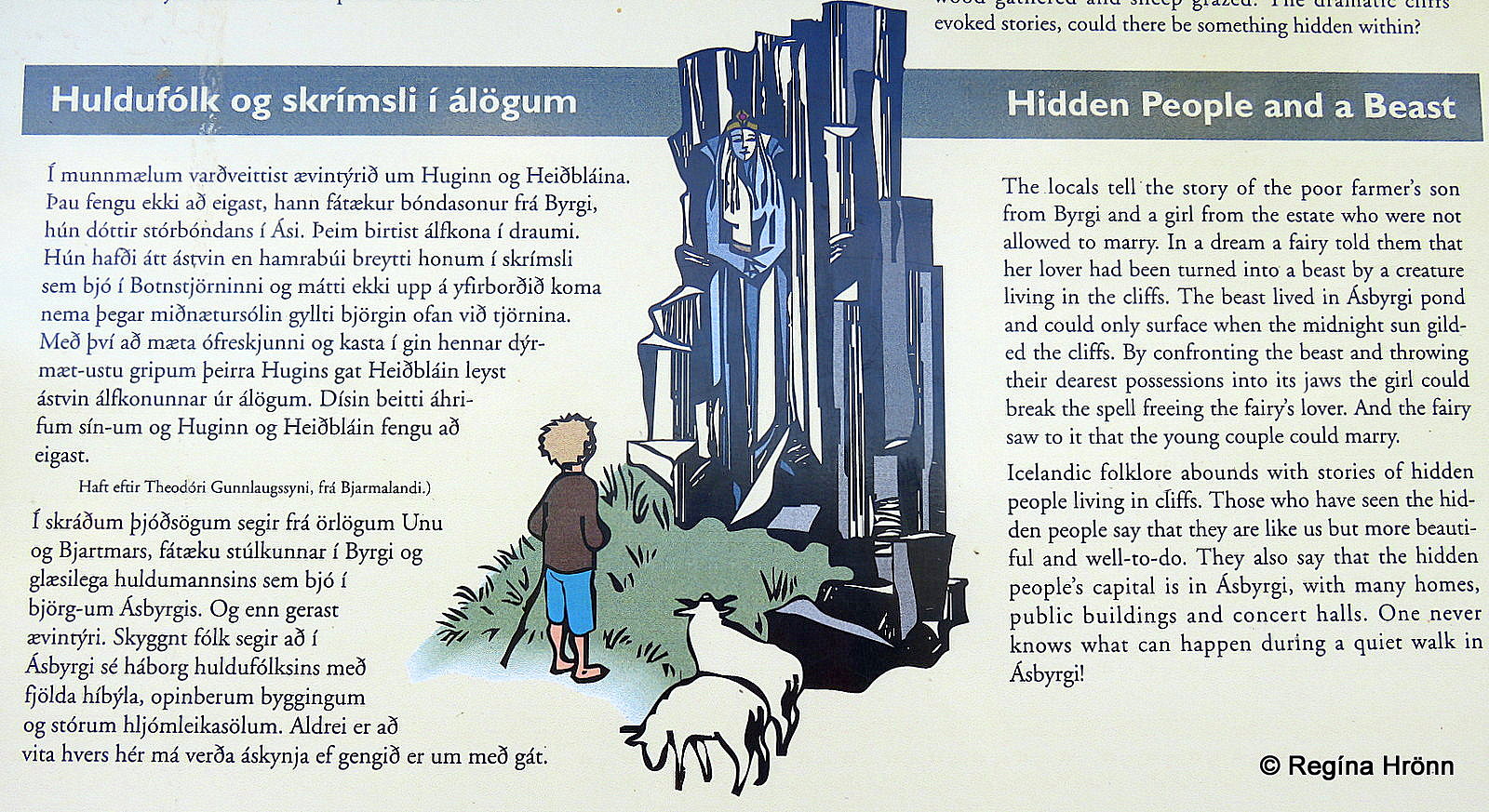 Icelandic folklore tells us a story that took place at Botnstjörn pond – the Hidden People and a Beast.

It tells the story of an elf woman, water horse, forbidden love, hex, and courage. Parts of it are written on the information sign by the parking lot for Botnstjörn pond.

Eyjan – the Cliff and other hikes in Ásbyrgi 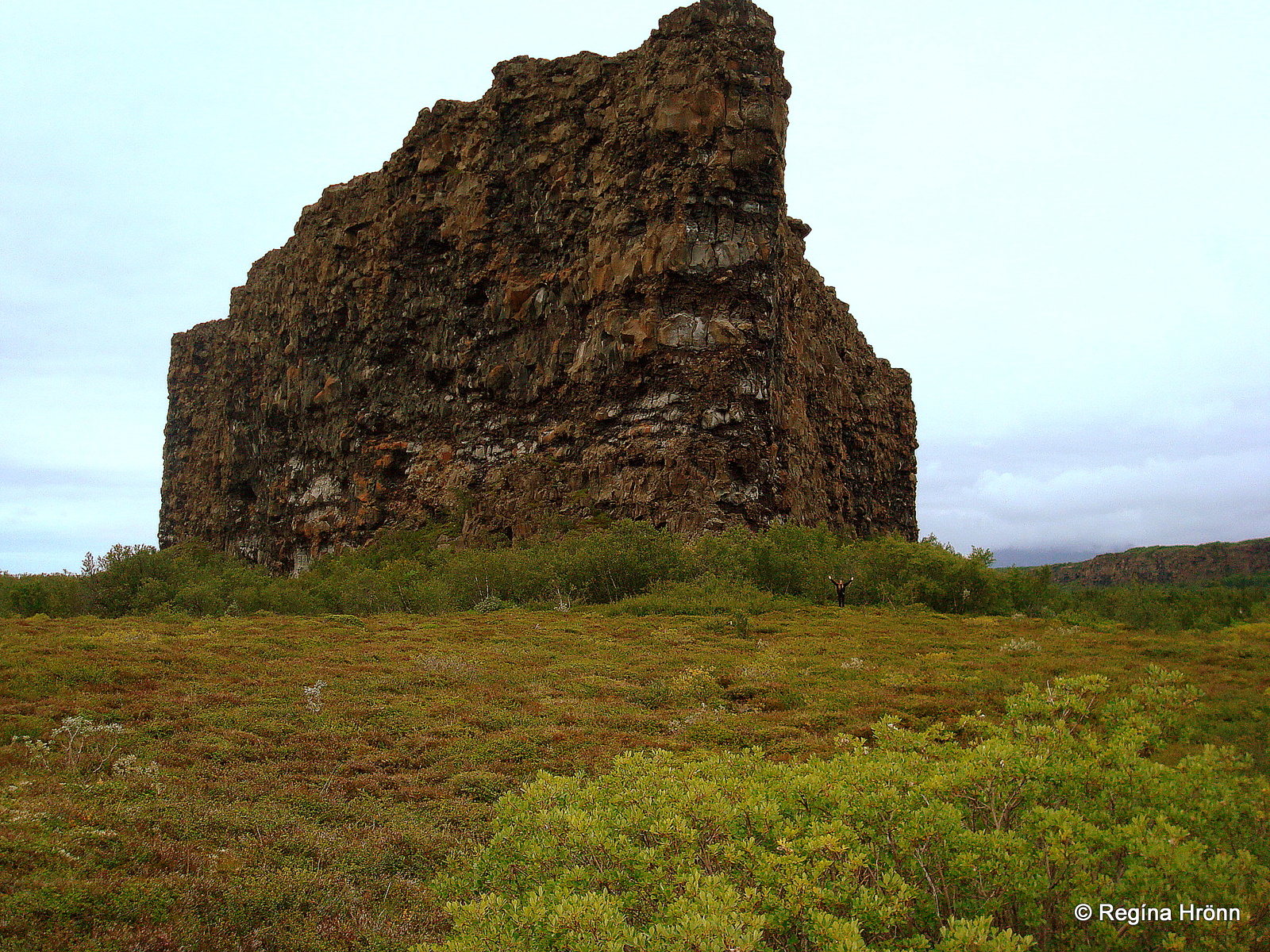 Standing in front of the Eyjan cliff in Ásbyrgi

Rising up in the middle of Ásbyrgi is a 250 meters wide cliff, which is called the Island or “Eyjan” in Icelandic.

To get an idea of how big this rock is, then if you look closely you can see in the photo above, how small I am waving my hands beneath the rock 🙂 Eyjan is 60 meters high at that point. 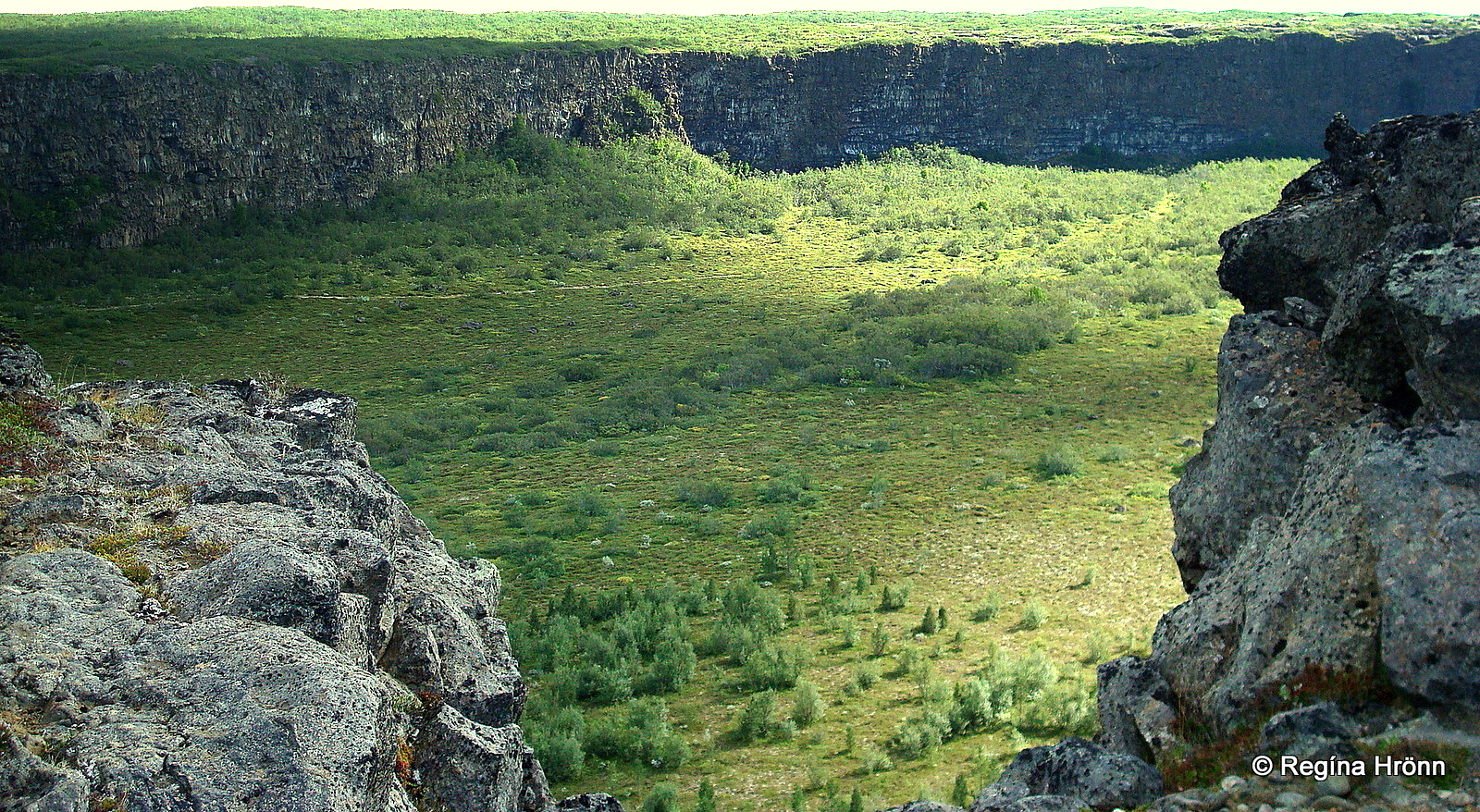 The view from Eyjan

From the camping site, a hiking trail leads to the top of Eyjan and all the way to the end where you can have a fantastic view of Ásbyrgi.

The hike is 4.5 km back and forth and takes approx. 2 hours to complete. 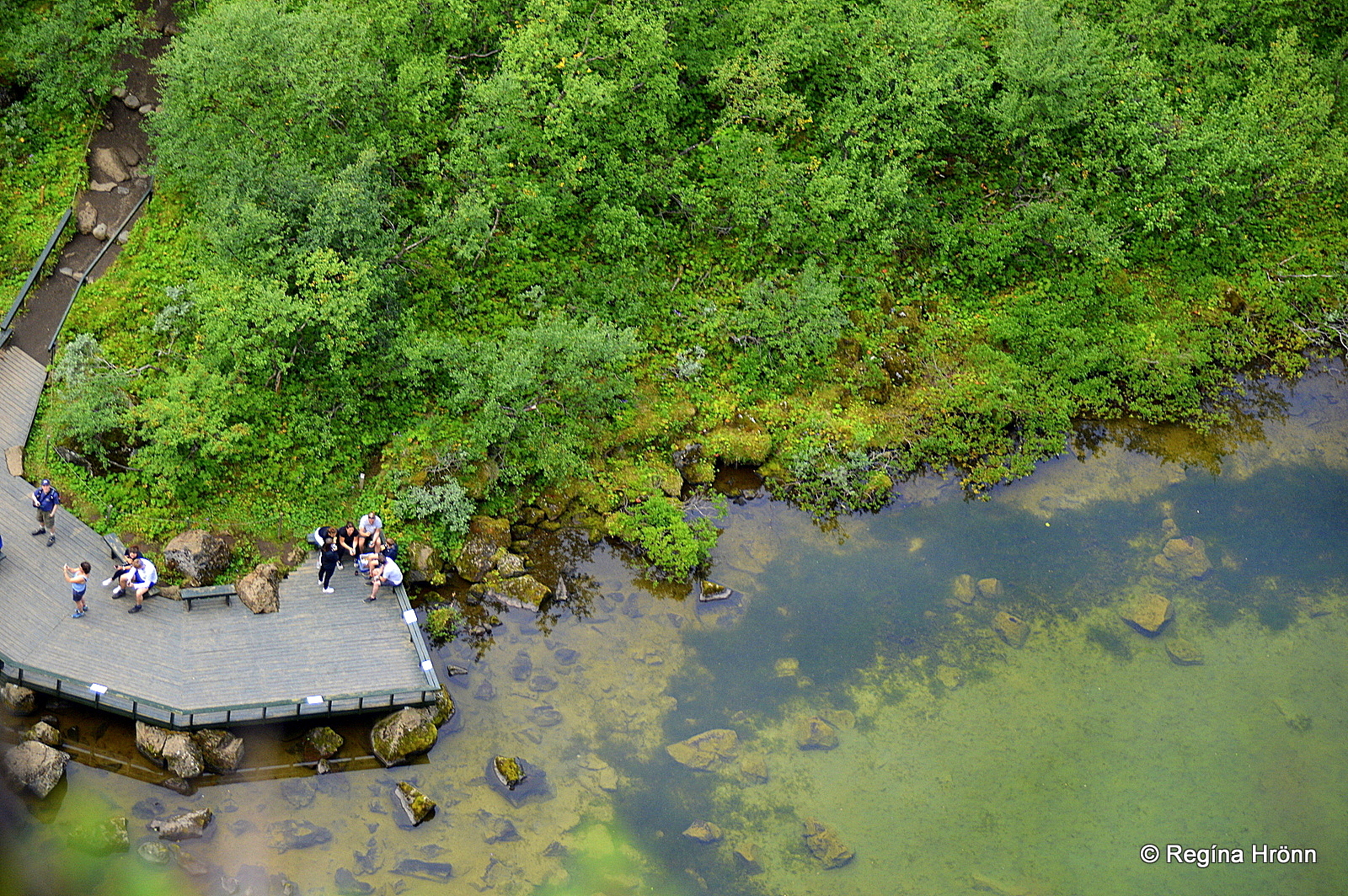 There is also an excellent 3-4 hour hike along the rim of Ásbyrgi canyon, from where you can have a look at Ásbyrgi and Botnstjörn pond from above.

That hike is 9 km back and forth the same way and is highly recommended for those of us who have got enough time to spare while visiting Ásbyrgi.

Many of the photos I have added in this travel-blog were taken during that hike.

The National park’s Visitor Center, Gljúfrastofa, is located in Ásbyrgi.

At the Visitor Center, you can visit an exhibition about Jökulsárgljúfur canyon, and get detailed information from the park ranger about Ásbyrgi and the National park, the wildlife, vegetation, and landscape, including maps with hiking trails in this area.

On the website of Vatnajökulsþjóðgarður National park, you will also find good information about the various hikes.

Ásbyrgi is located by roads 85 and 861 some 35 km away from Dettifoss waterfall and 16 km away from Hljóðaklettar – Echo Rocks.

Next, we are going to visit Húsavík, the whale watching capital of Iceland, which is approximately 60 km away from Ásbyrgi via road 85.

Have a lovely time at Ásbyrgi 🙂