In Eyjafjörður fjord in North-Iceland, you will find one of the biggest turf houses in Iceland, the Laufás turf house. 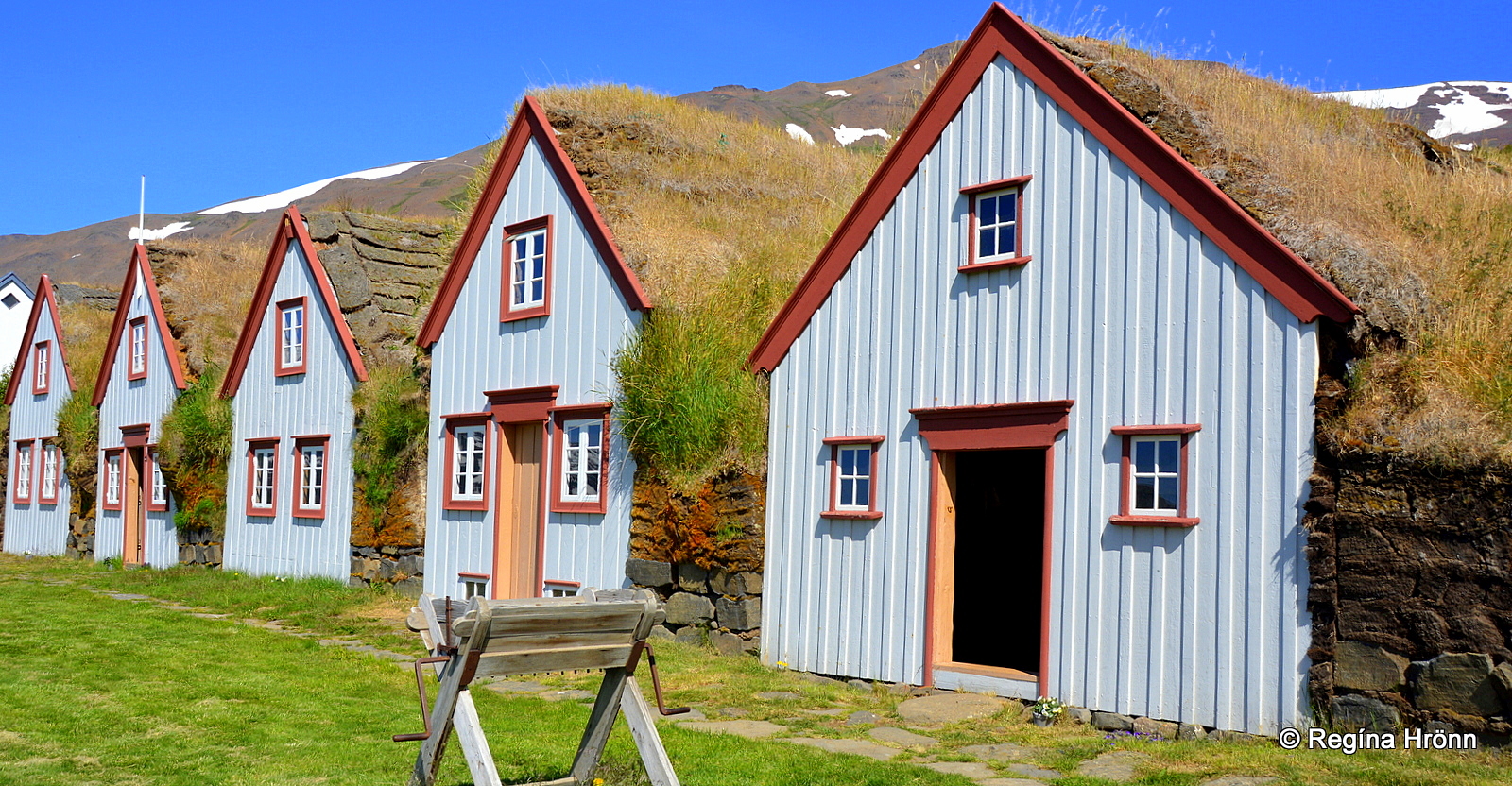 The traditional building method here in Iceland from the Settlement of Iceland (874-930) was the building of turf houses, and both rich and poor lived in such houses.

Dotted all around the country were turf houses, big and small, depending on the wealth and position of the owner. Now only a few of them are left.

The few remaining turf houses are our inheritance from past generations.

Most of the biggest turf houses are now in the possession and under the supervision of Þjóðminjasafnið – the National Museum of Iceland and are open in the summertime as museums.

Visiting the turf houses will make you feel like you stepped back in time. 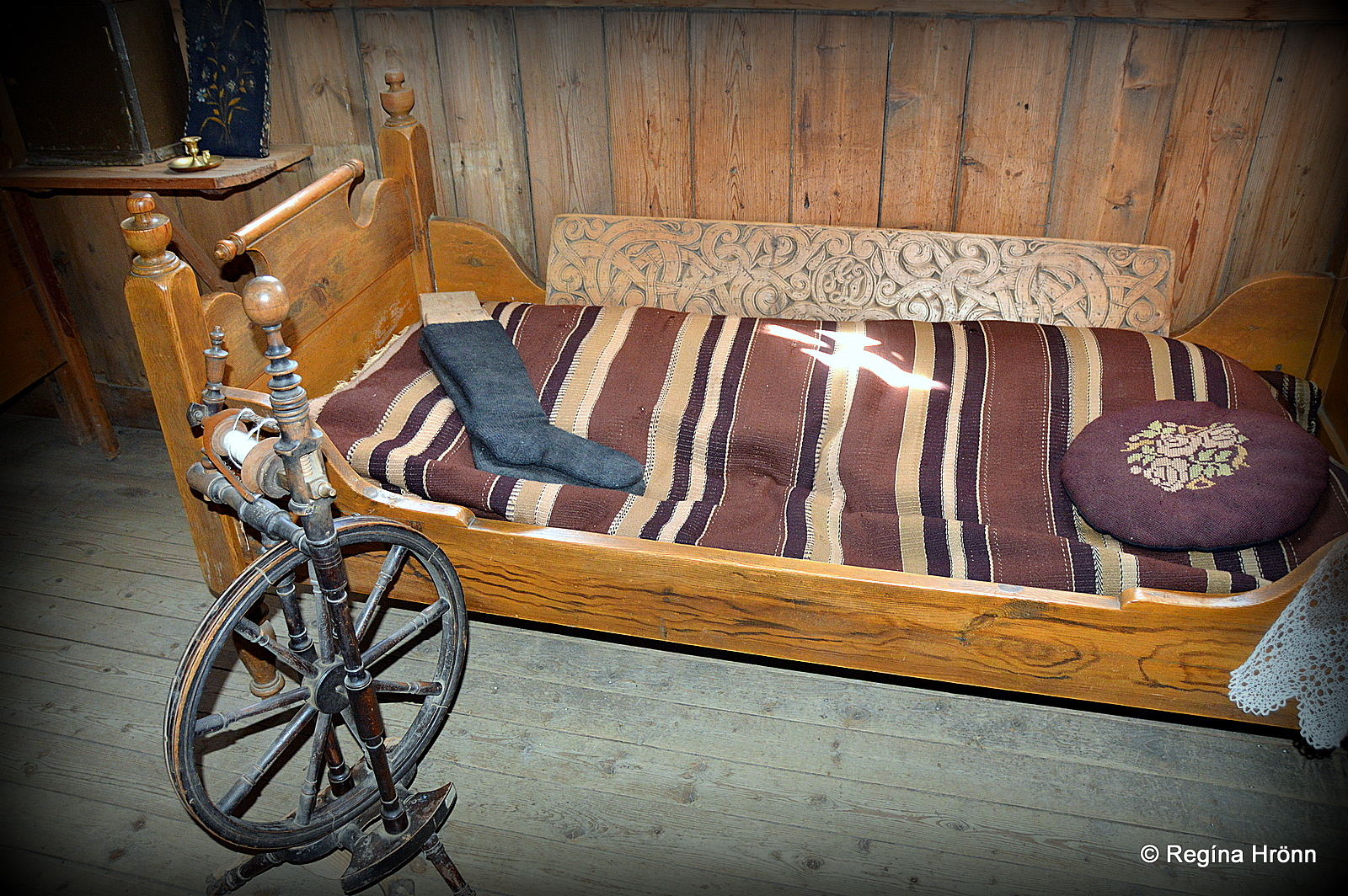 A spinning wheel and old relics at Laufás

Turf houses were built with turf and rocks and where there was lava available, the lava was used in the walls of the turf houses, as you will see at Grenjaðarstaður turf house.

Turf houses need constant maintenance due to their building material.

Laufás farm probably dates back to the Settlement of Iceland, even though it isn’t mentioned in Landnáma – the Book of Settlements of Iceland, so there must have been many turf farms at Laufás which were constantly being maintained and rebuilt. 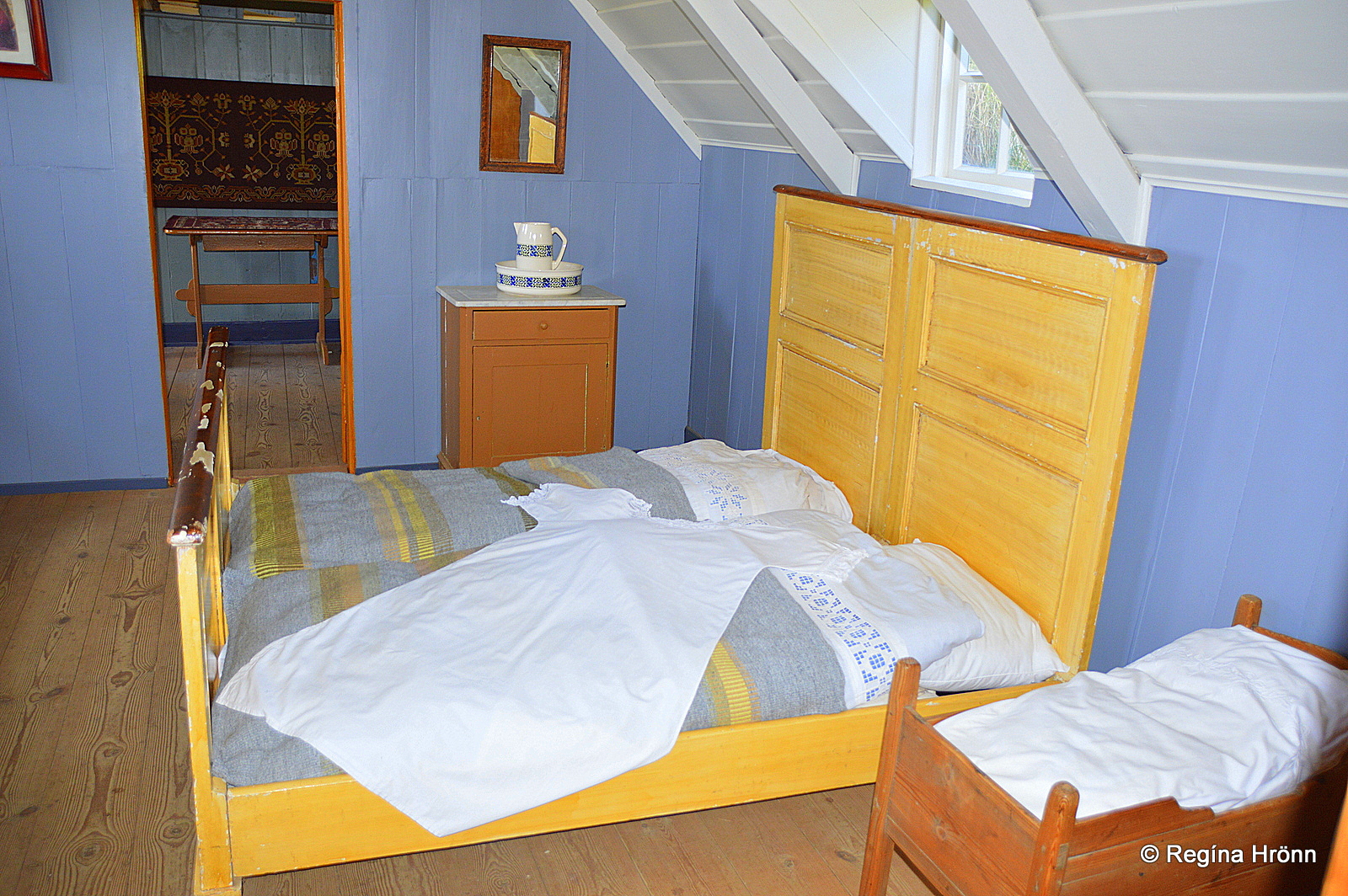 This beautiful turf house was a wealthy vicarage and was built for a minister with a large household, but some 20-30 people lived at Laufás at this time. 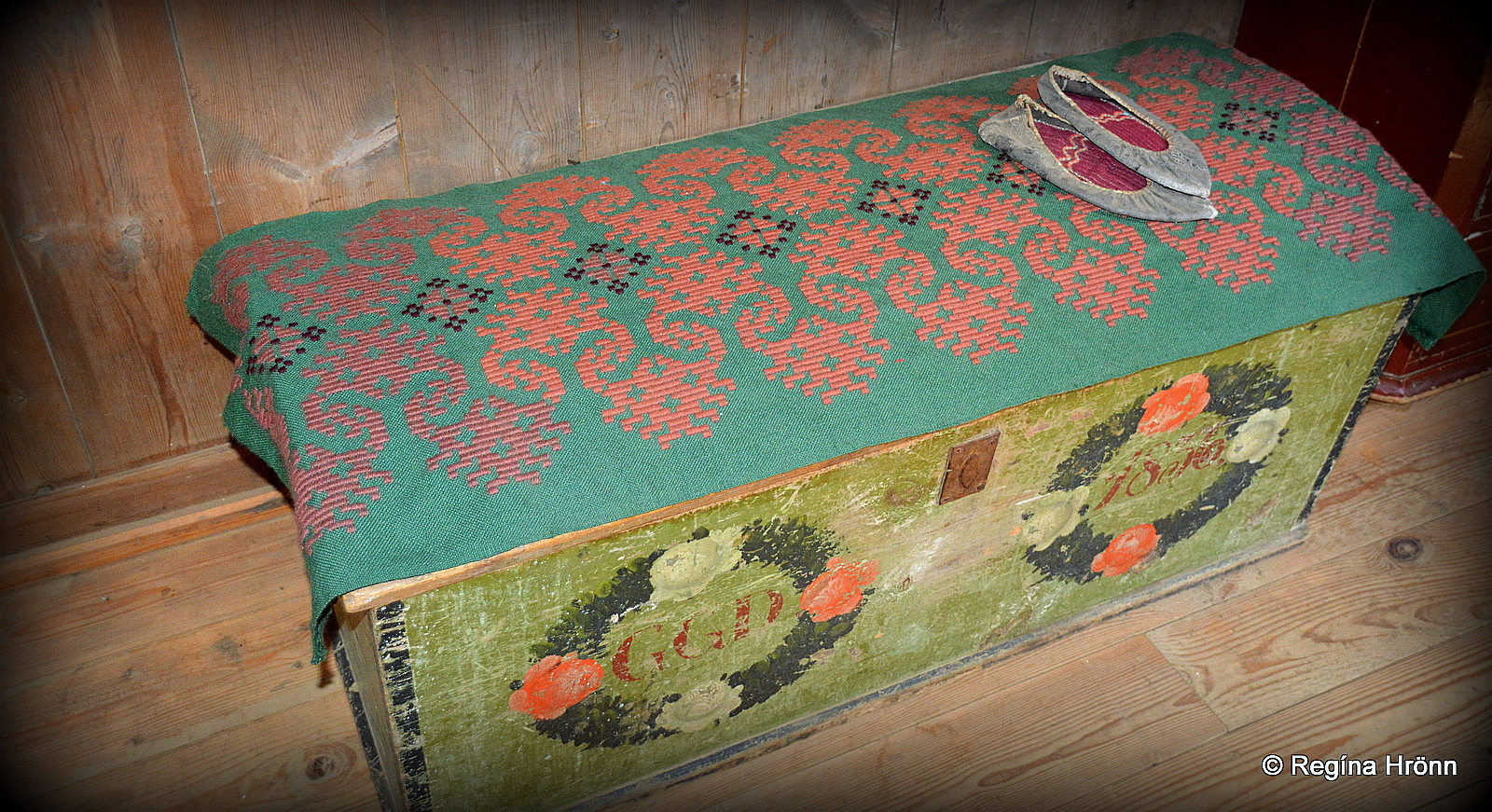 An old chest at Laufás farm

It wasn’t until the mid 20th century that the last inhabitants moved out of the turf houses, and f.ex. the inhabitants at Bustarfell turf house East Iceland lived on the turf farm until around 1966.

The last inhabitants of the “sunnlenskur” southern-style turf house at Austur-Meðalholt in South-Iceland moved out at the same time, or in 1965. 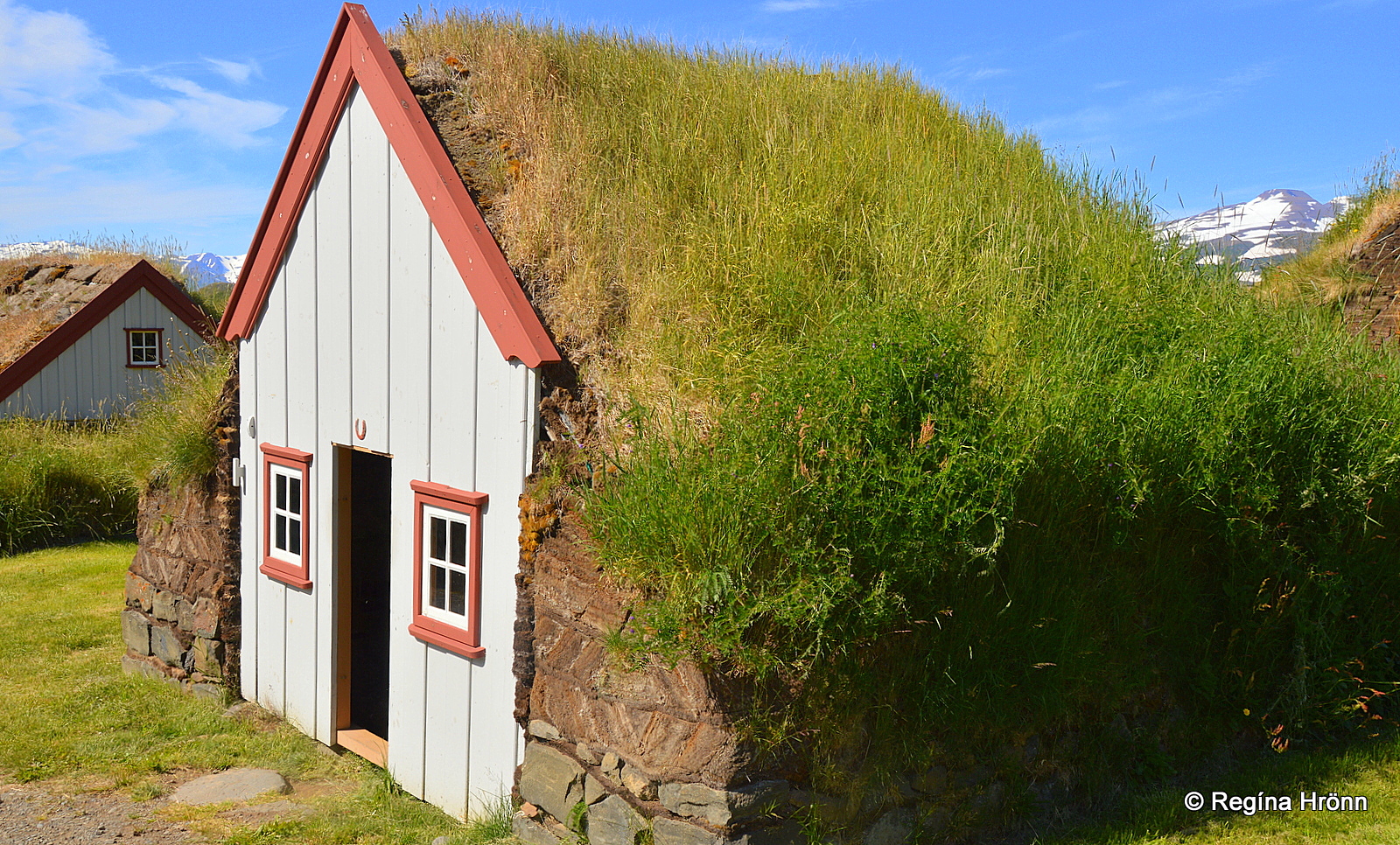 See how thick the turf walls are at Laufás

The oldest wood might even be 2 centuries older or even older. 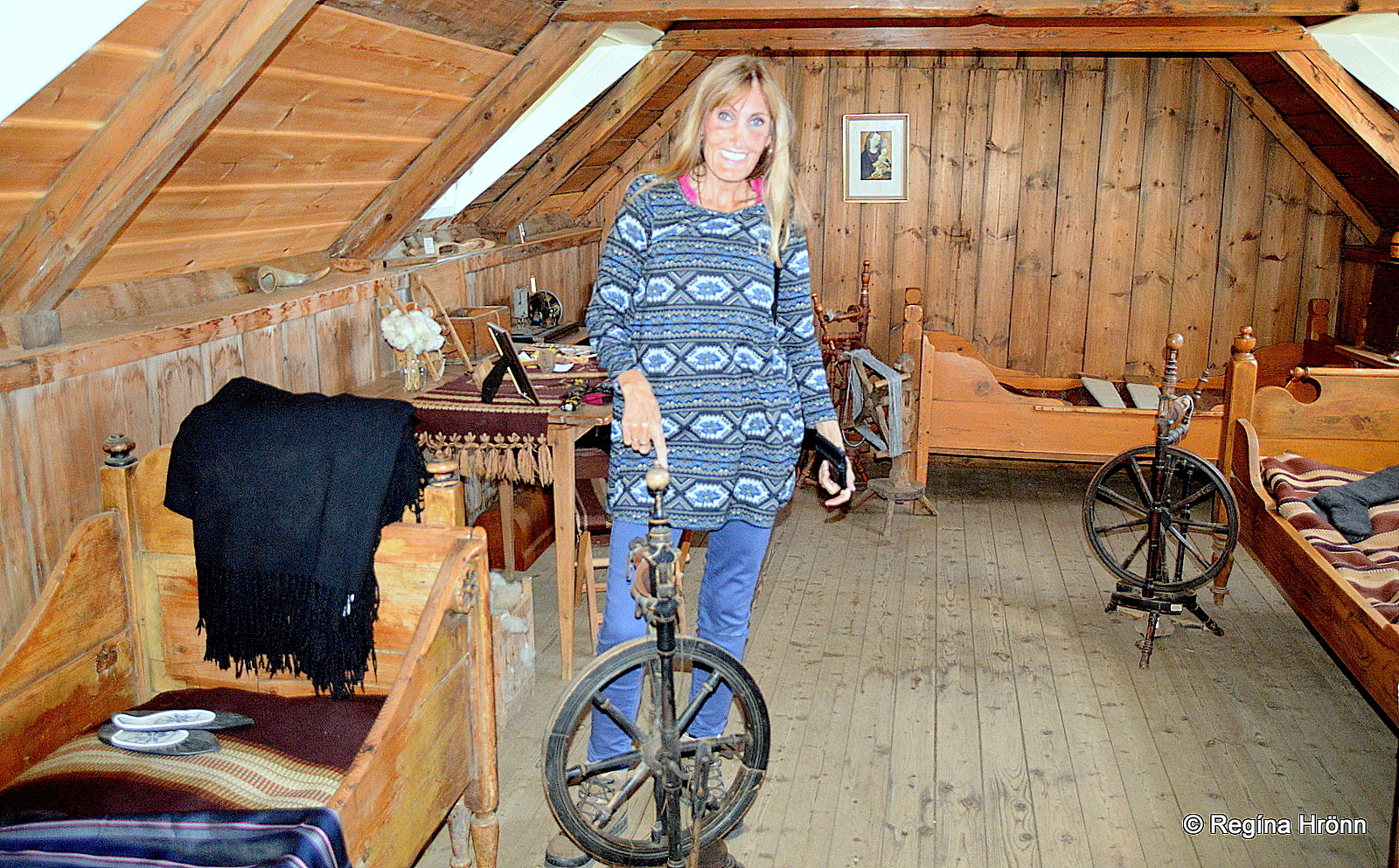 The main room in the turf houses was the baðstofa or living room, but here the inhabitants gathered at night and slept, ate, and did some handiwork.

You will see in my photo above how the inside of the baðstofa was panelled, but that was customary in the turf houses, so on the inside, the baðstofa looks like a timber house. 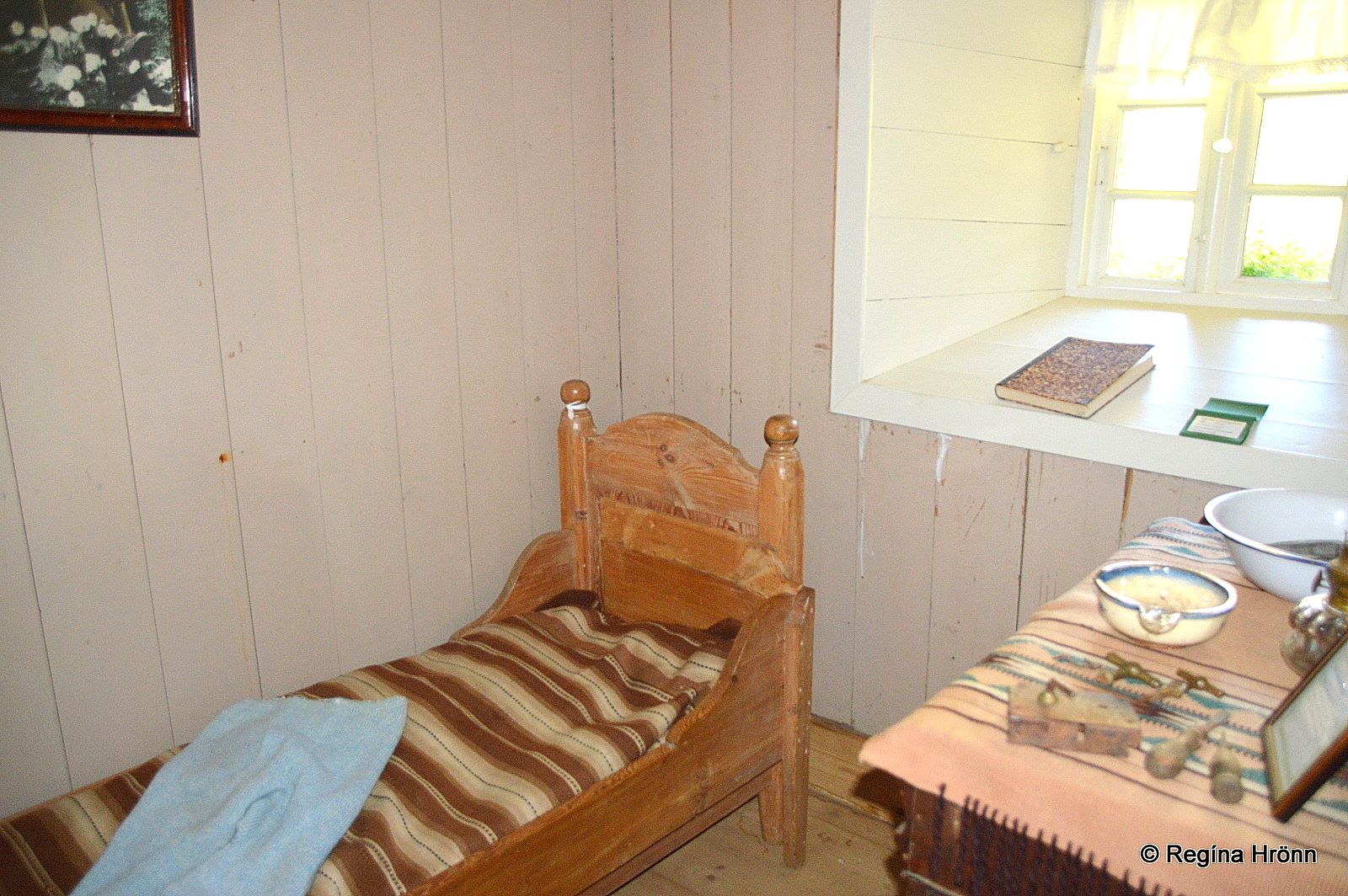 The relics at Laufás date back to 1900

Akureyri Museum runs a museum at Laufás in the summertime.

I am always amazed when I visit turf houses, as they seem to be much bigger on the inside than they are on the outside 😉 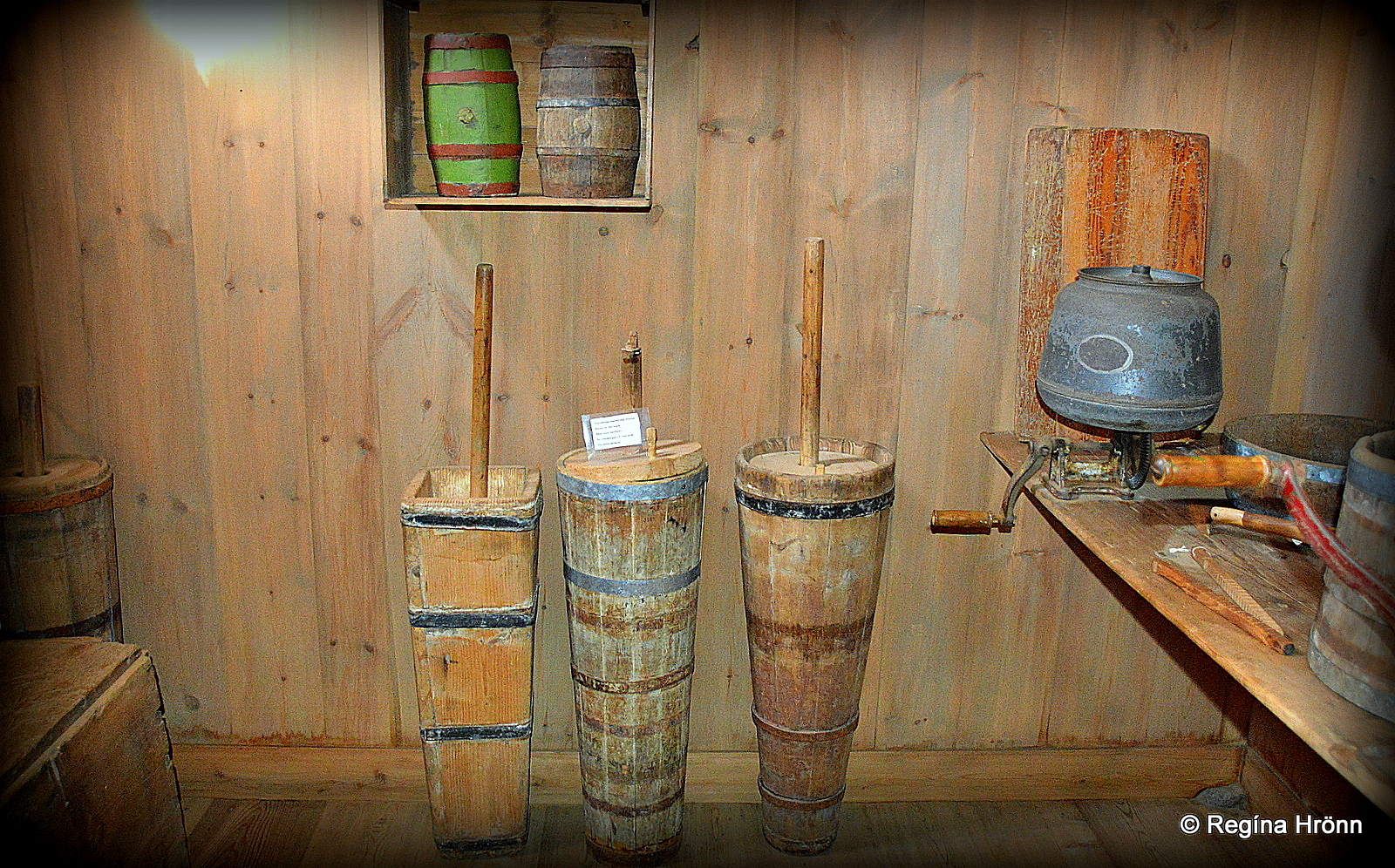 And Laufás is spacious with many corridors and rooms with furnishing and old household items dating back to around 1900.

The household items and the old clothes you will see at Laufás were collected from the neighboring farms, but some of them were originally in Laufás.

Watch your head when you visit the turf houses, people were smaller in the olden days and I, without fail, bump my head when I visit turf houses 😉 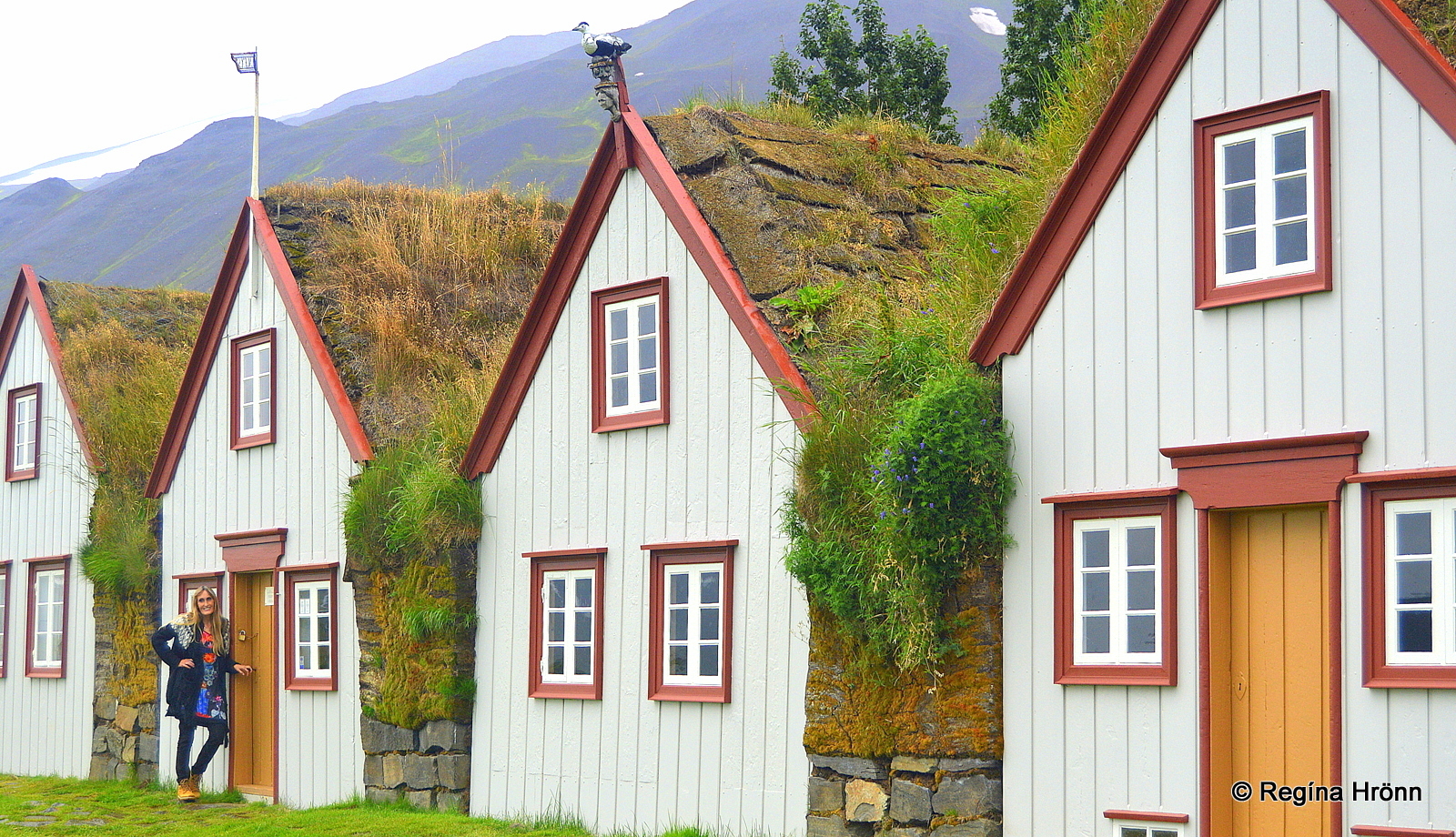 Can you spot the eider duck?

While visiting Laufás turf house see if you can spot the carved eider duck on one of the gables.

It was unfortunately broken when I took the photos in this travel-blog. But I found one photo from a couple of years ago where you can see the eider duck from afar.

An eider nesting area belongs to Laufás farm and that is what the eider duck represents, as eiderdown meant a considerable income for Laufás. 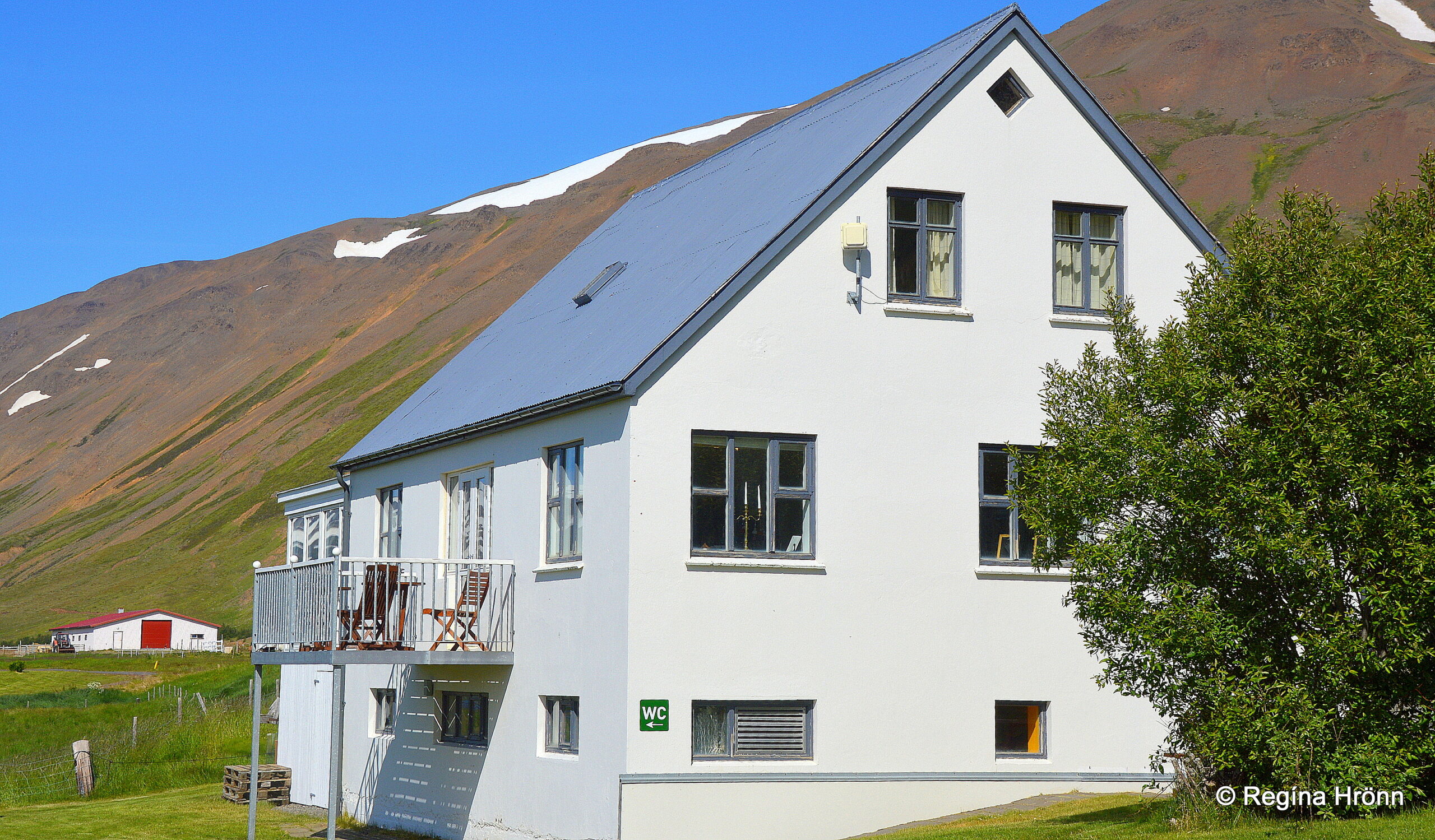 The Visitor Centre at Laufás

Tickets for entering the Laufás museum can be bought in the white house by the parking lot next to the turf house. This is the old vicarage which is now the Visitor Centre for Laufás. 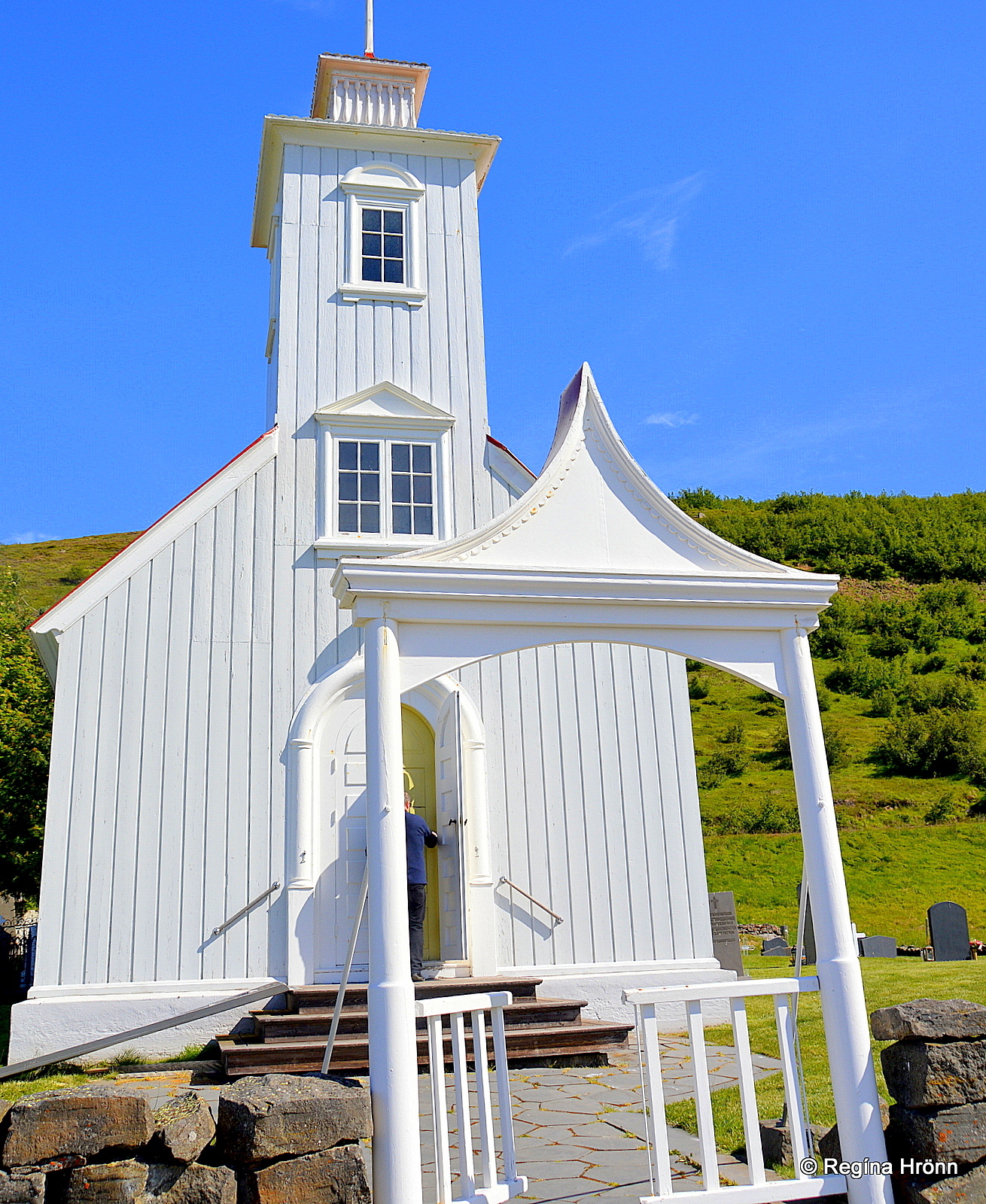 The lovely white painted church next to Laufás turf house was built in 1865. In Catholicism, Laufáskirkja church was dedicated to the Apostle Paul. It is most likely the 6th church erected at Laufás.

There has most likely been a church here at Laufás since early Christianity, i.e. before the Christianisation of Iceland in the year 1000, which I told you about in my Goðafoss travel-blog. 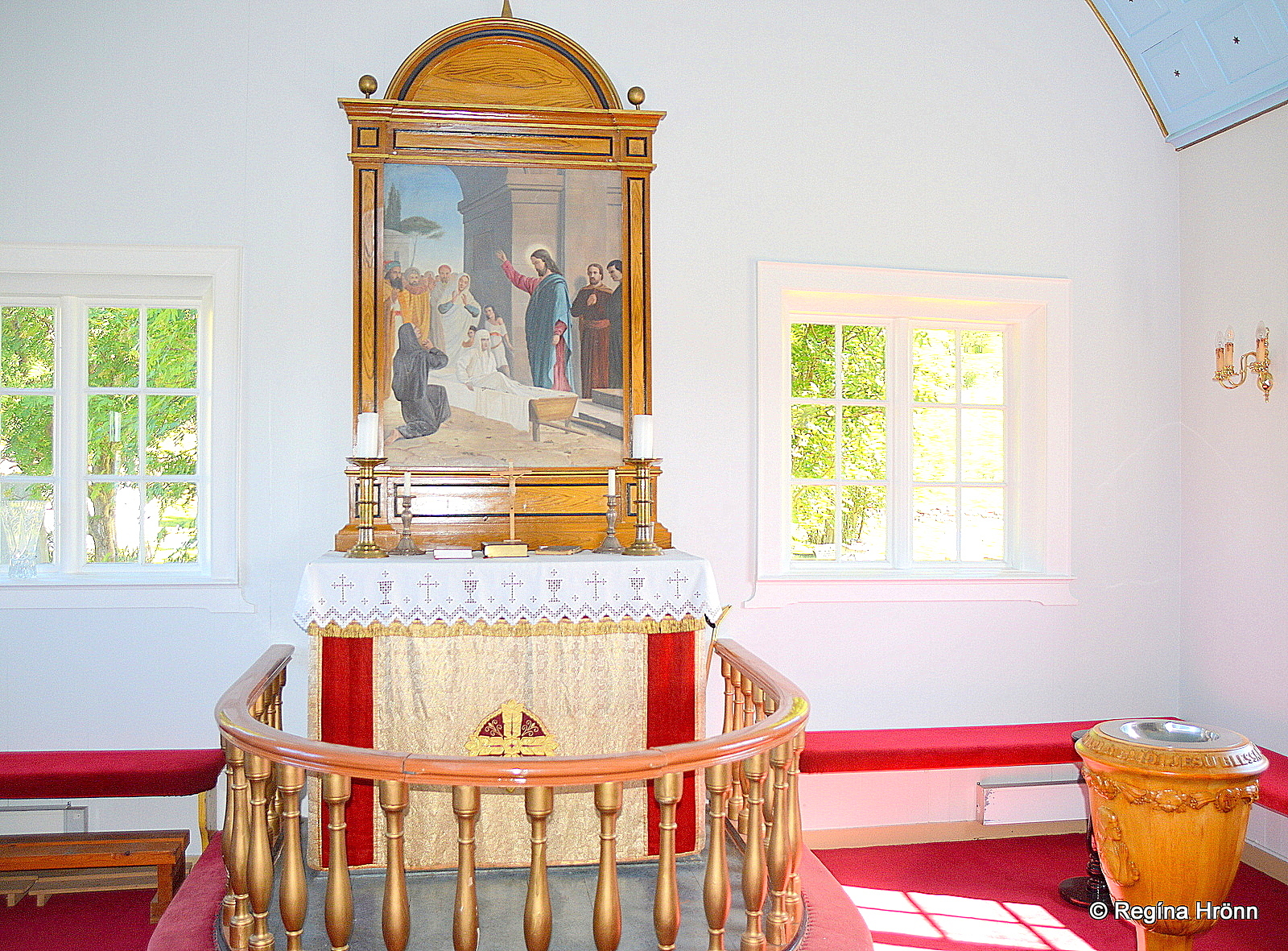 The altar in Laufáskirkja church

Laufás is mentioned once in Ljósvetningasaga, one of the Icelandic Sagas, when purification was performed at Laufáskirkja church by Ketill Möðruvellingaprestur.

The item which stands out is the beautifully carved and painted pulpit dating back to 1698. It depicts the 4 Evangelists with Christ in the middle of the pulpit. 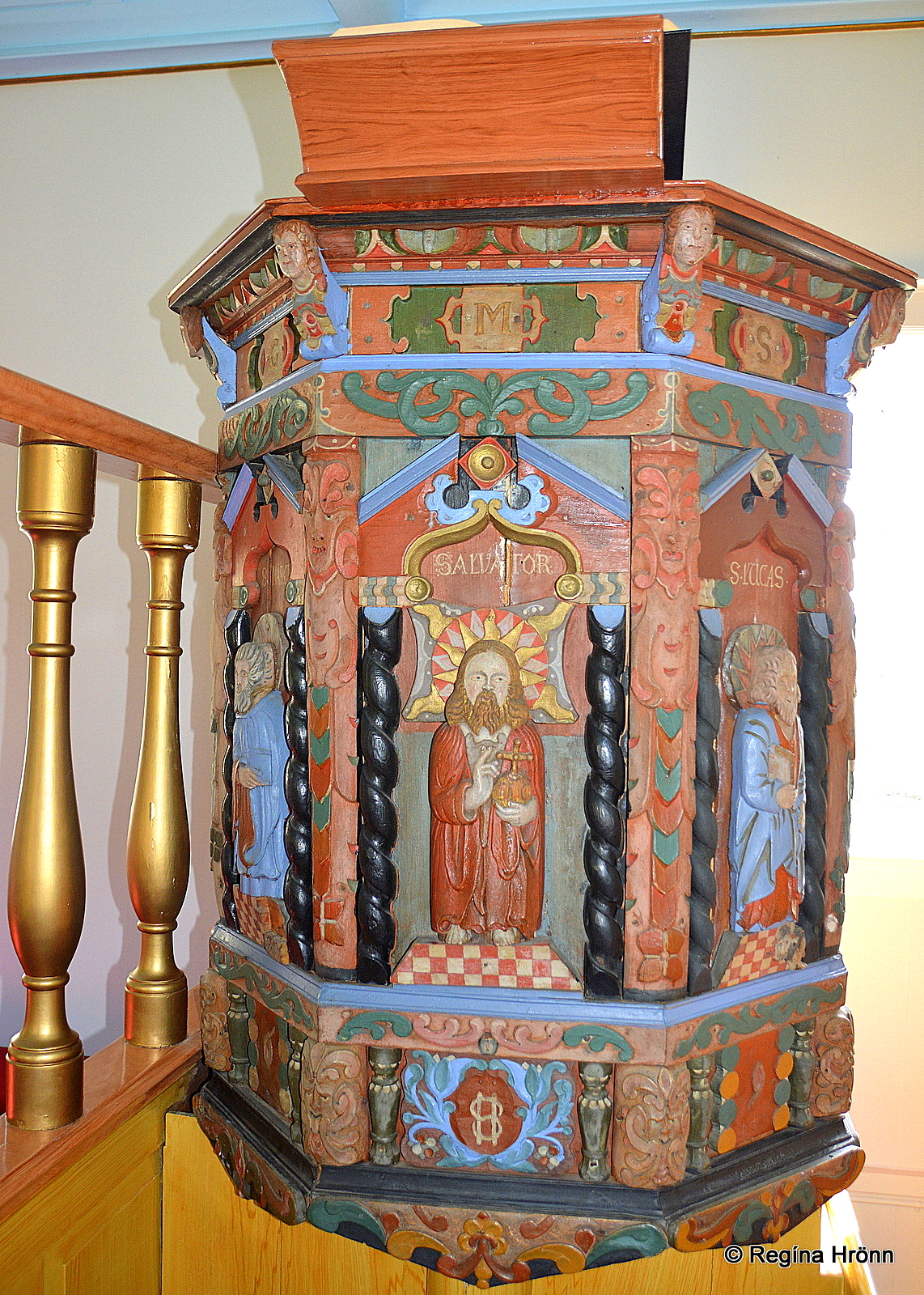 The carved pulpit in Laufáskirkja church dates back to 1698

You might find it interesting to know that the small garden behind our Parliament building in Reykjavík is largely Tryggvi’s creation and he maintained the garden until his death. After Tryggvi died he was laid to rest in the Parliament garden. 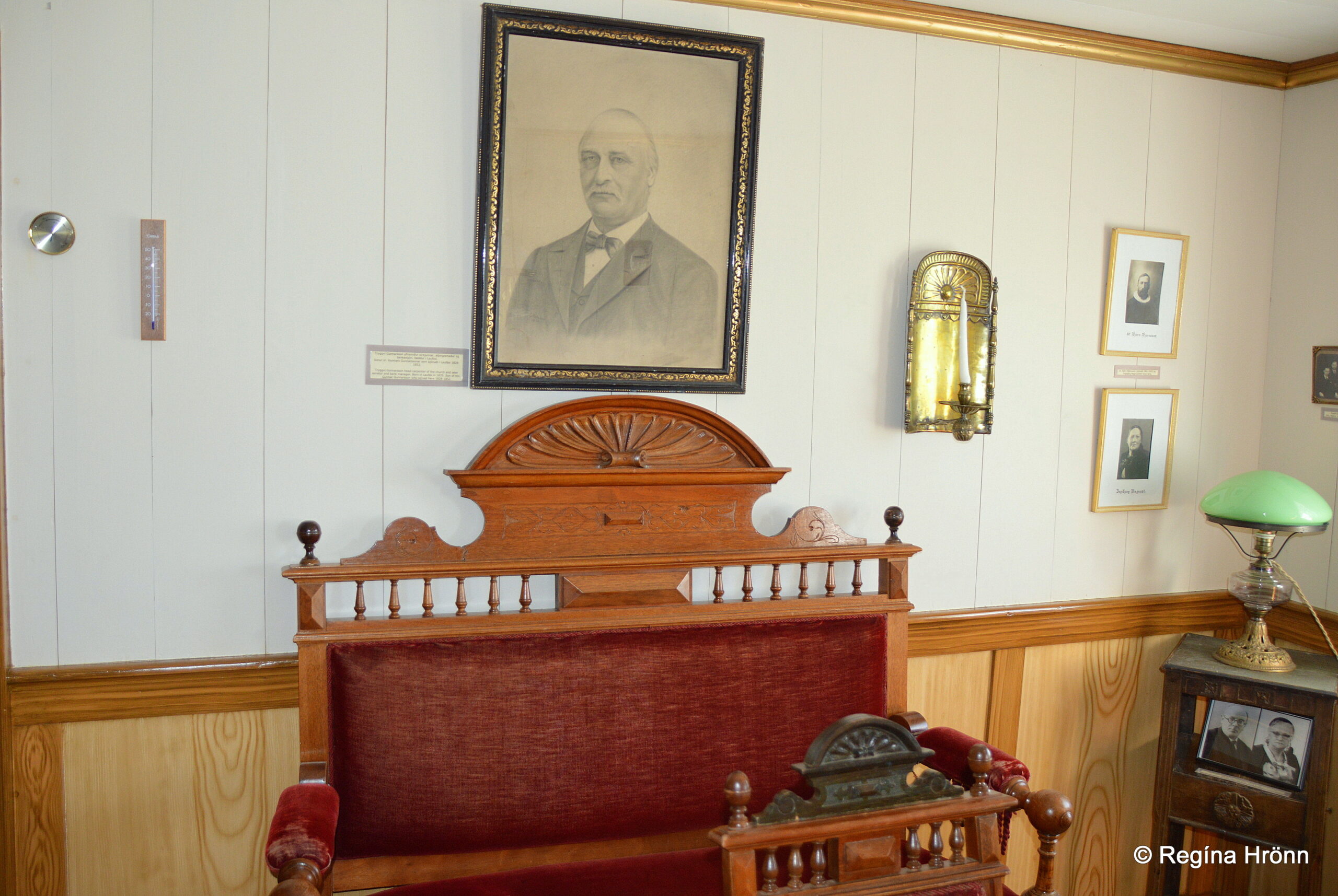 The garden, which is one of Reykjavík’s hidden secrets, is hidden away behind the Parliament building, but it has been open to the public since 1950.

You might want to have a look at it during your Reykjavík visit.

In Reykjavík, you will find Tryggvagata street, which was named after Tryggi Gunnarsson. 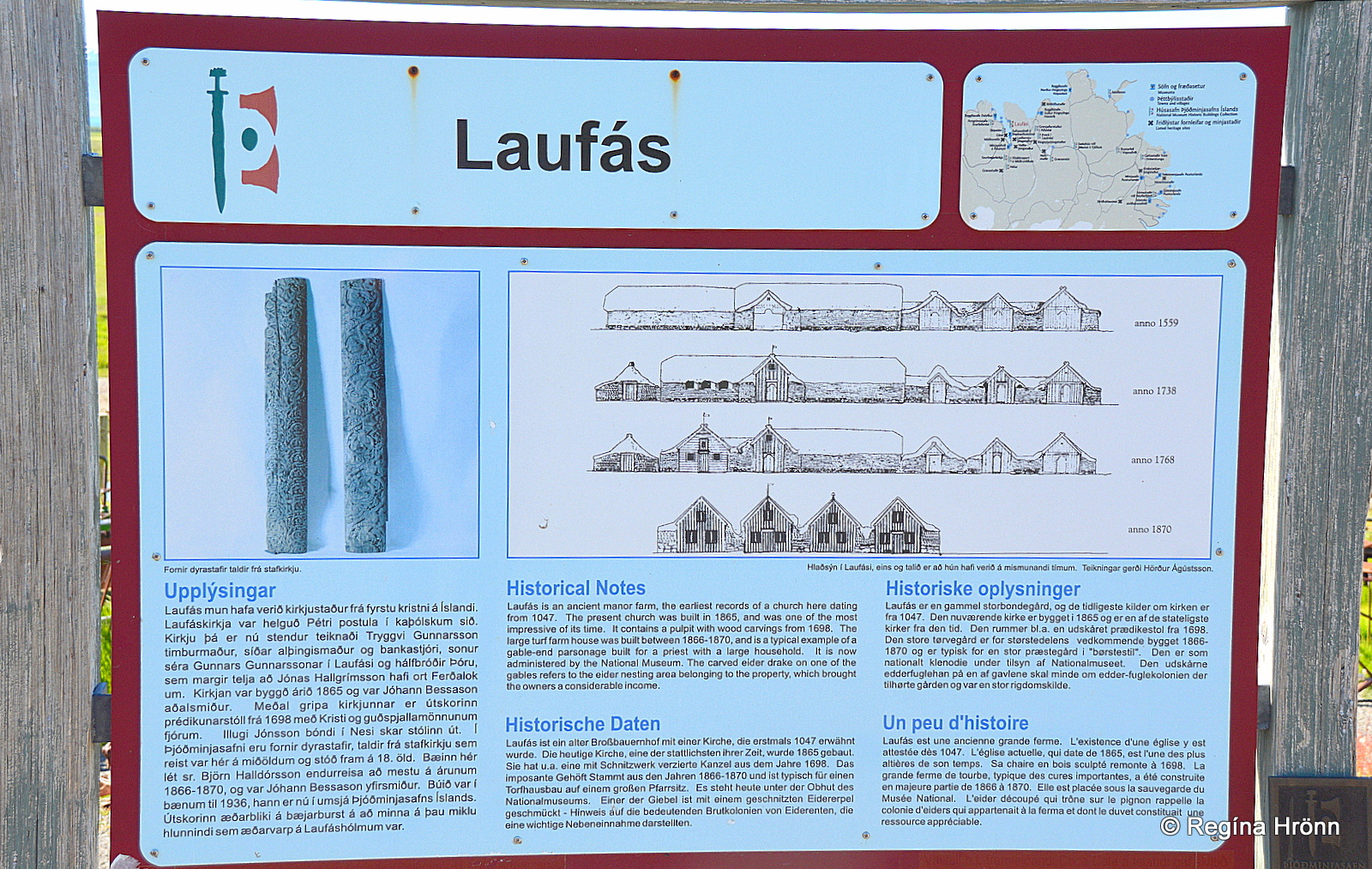 Laufás turf house is located in Eyjafjörður fjord in beautiful settings with an ocean view.

Laufás is a bit off the beaten path now since the Vaðlaheiðargöng tunnel was opened (2020), but a drive through the beautiful countryside in Eyjafjörður in the summertime surpasses driving through a tunnel, in my opinion.

From Laufás it is possible to drive into Fnjóskadalur valley via Dalsmynni, just above Laufás, and visit Goðafoss waterfall. Here the river Fnjóská, the longest spring-fed river in Iceland, runs its course into the sea.

Laufás turf farm is 30 km away from Akureyri – the Capital of the North, which I will be showing you in my next travel-blog:

Have a lovely time exploring the turf houses in Iceland 🙂