One of the most beautiful and dramatic beaches in Iceland is Reynisfjara black sand beach in South-Iceland. 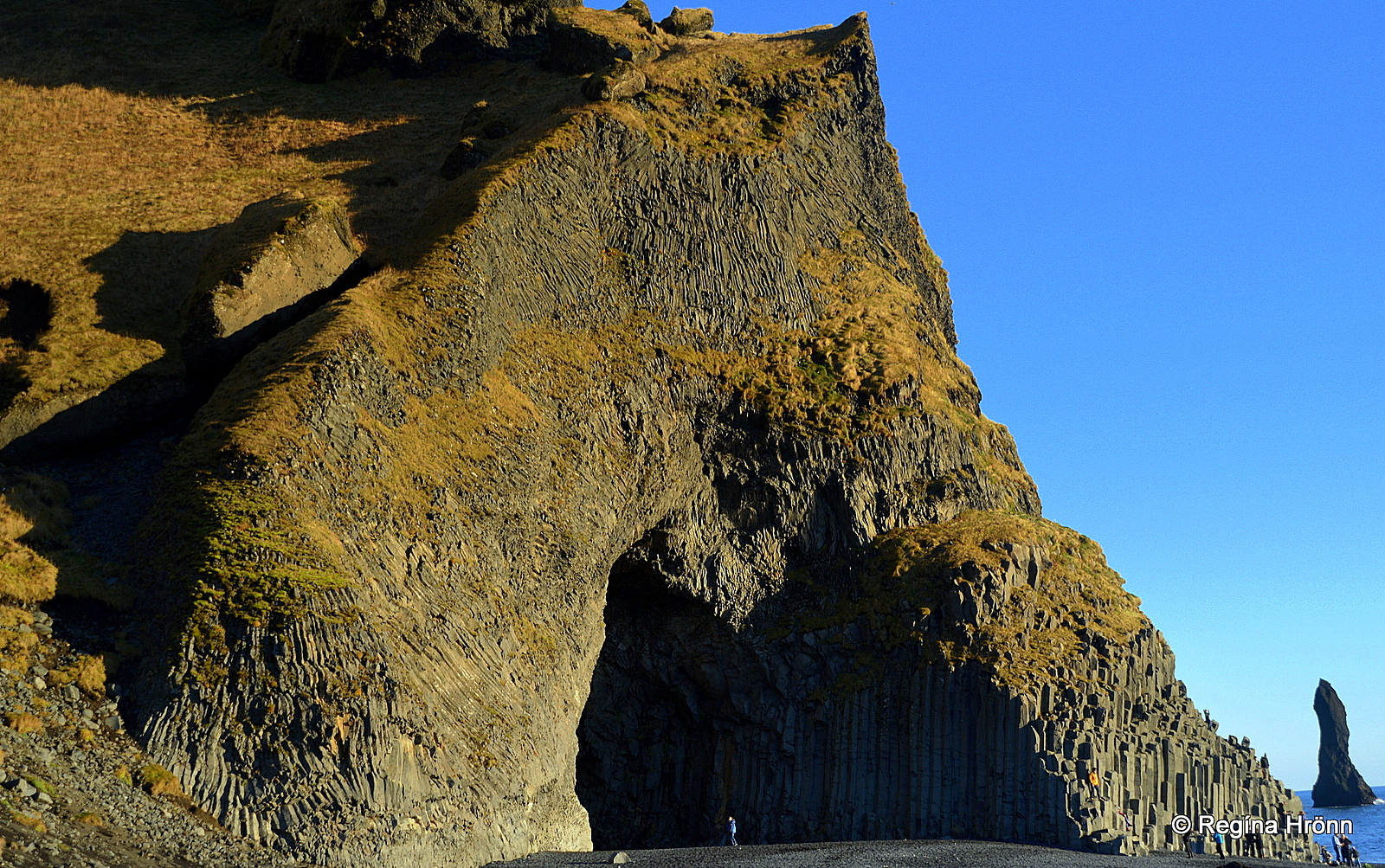 Hálsanefshellir and one of the Reynisdrangar sea stacks

Reynisfjara black sand beach is one of the most iconic landmarks on the south coast of Iceland and as such a major attraction along with the beautiful waterfalls and glaciers in South-Iceland.

What attracts most visitors to Reynisfjara beach are the extraordinary basalt column formations, along with the sea stacks Reynisdrangar. 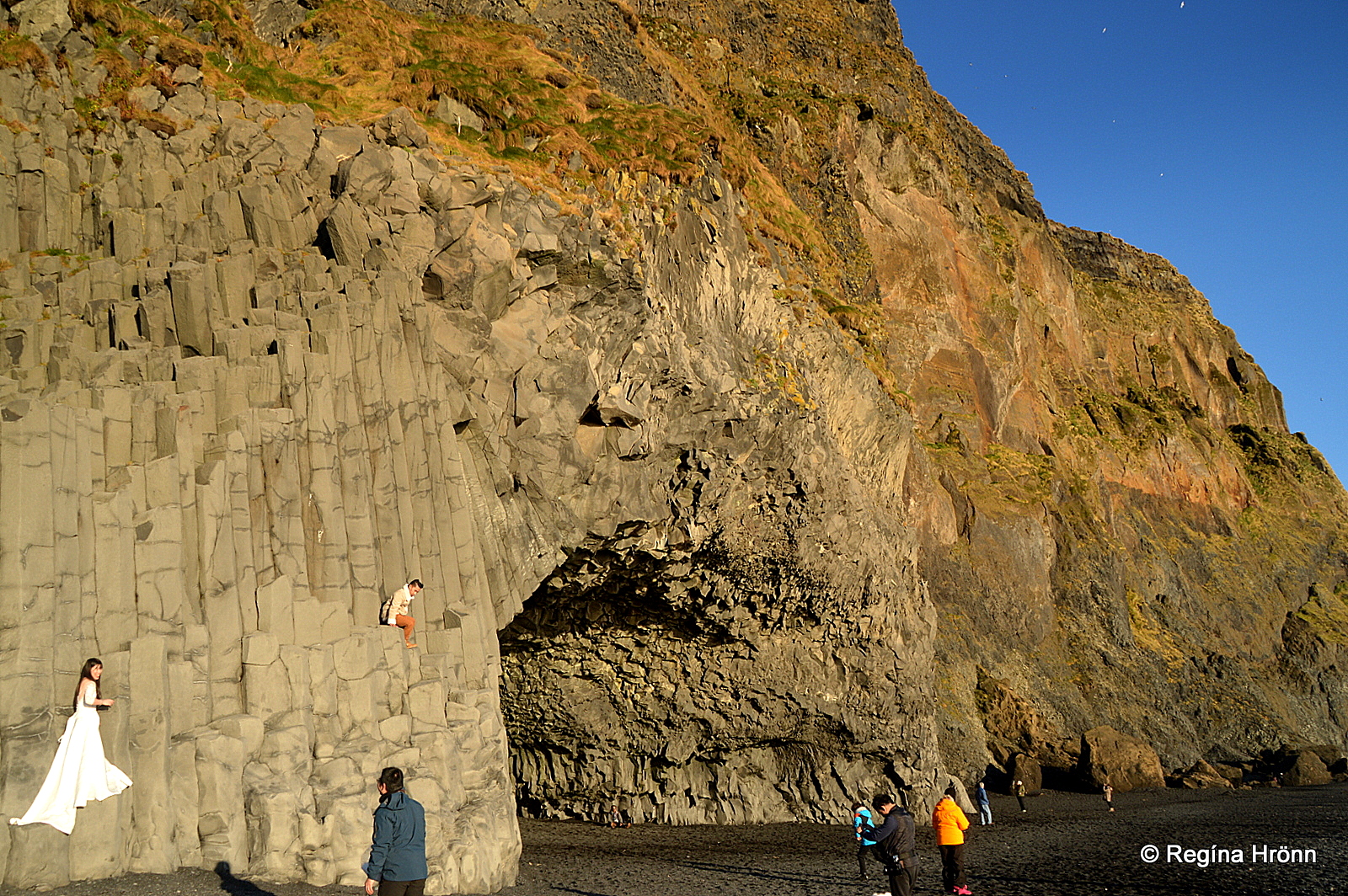 Hálsanefshellir cave and the basalt columns

Hálsaneshellir cave is also a big attraction at Reynisfjara beach. This vaulted basalt column cave is one of the most beautiful basalt column formations in Iceland. 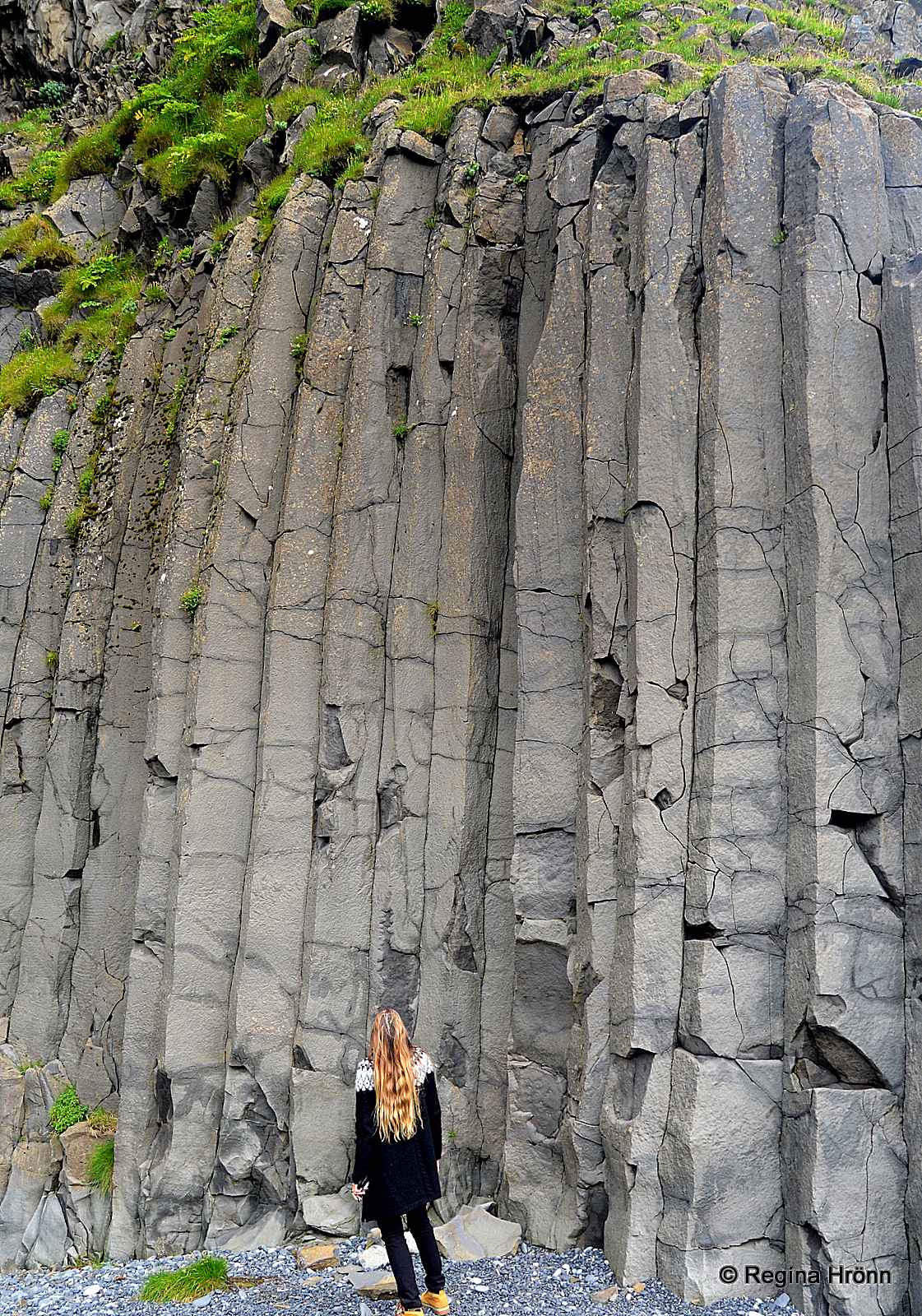 Seeing that Iceland is a volcanic island then you will find many basalt columns in Iceland, and those of you, who read my travel-blog know that I am a big fan of this artwork of nature and have written many travel-blogs about them.

Be careful when visiting the cave though as rocks can fall down from the ceiling and landslides are relatively frequent in this area. 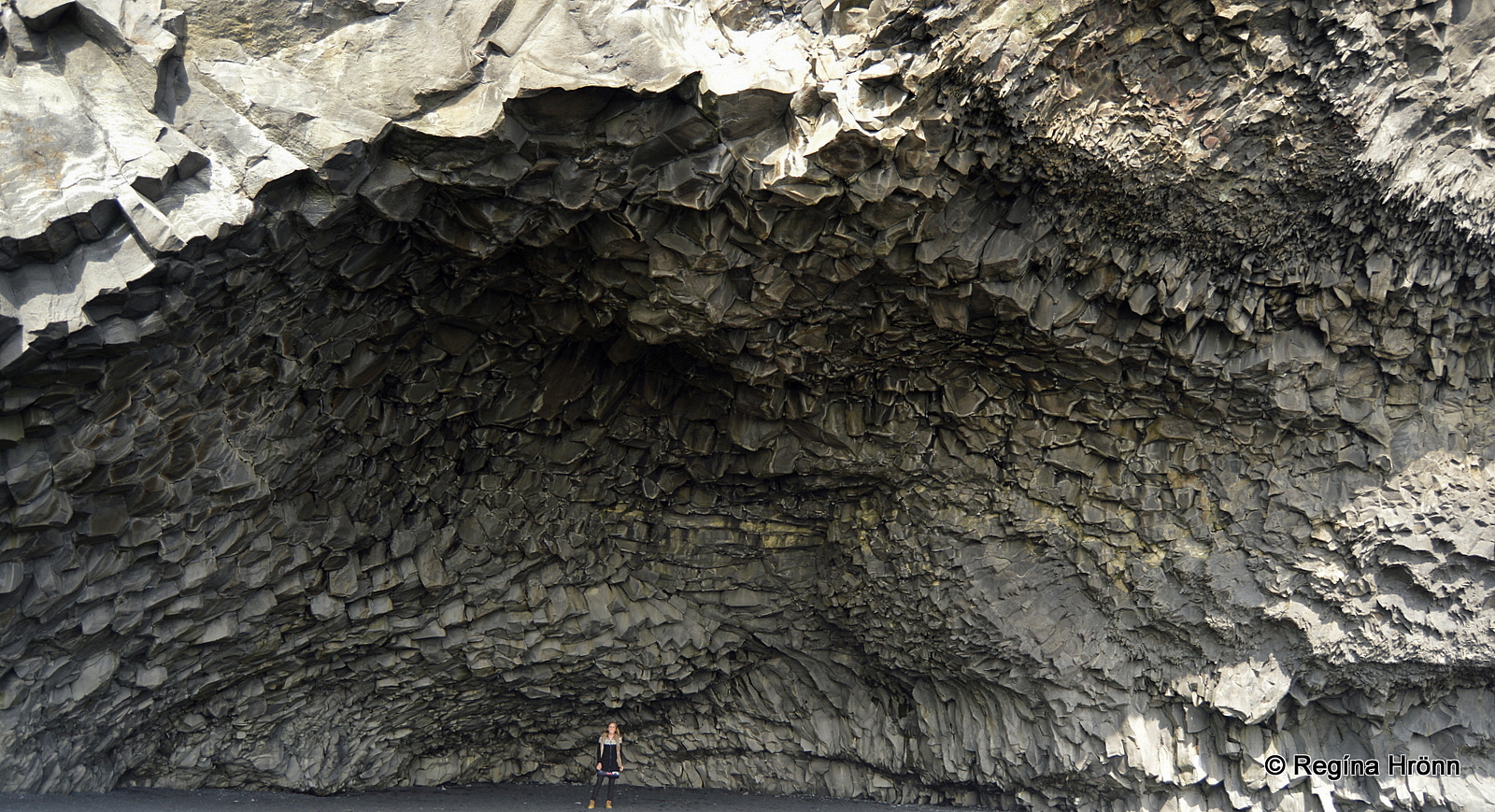 Deep inside the basalt column cave

Little did I know when I had the photo below taken that 100 tonnes of rocks had fallen down from the ceiling a couple of years prior to my visit to the cave!

So I will only be admiring the cave from a safe distance in the future. 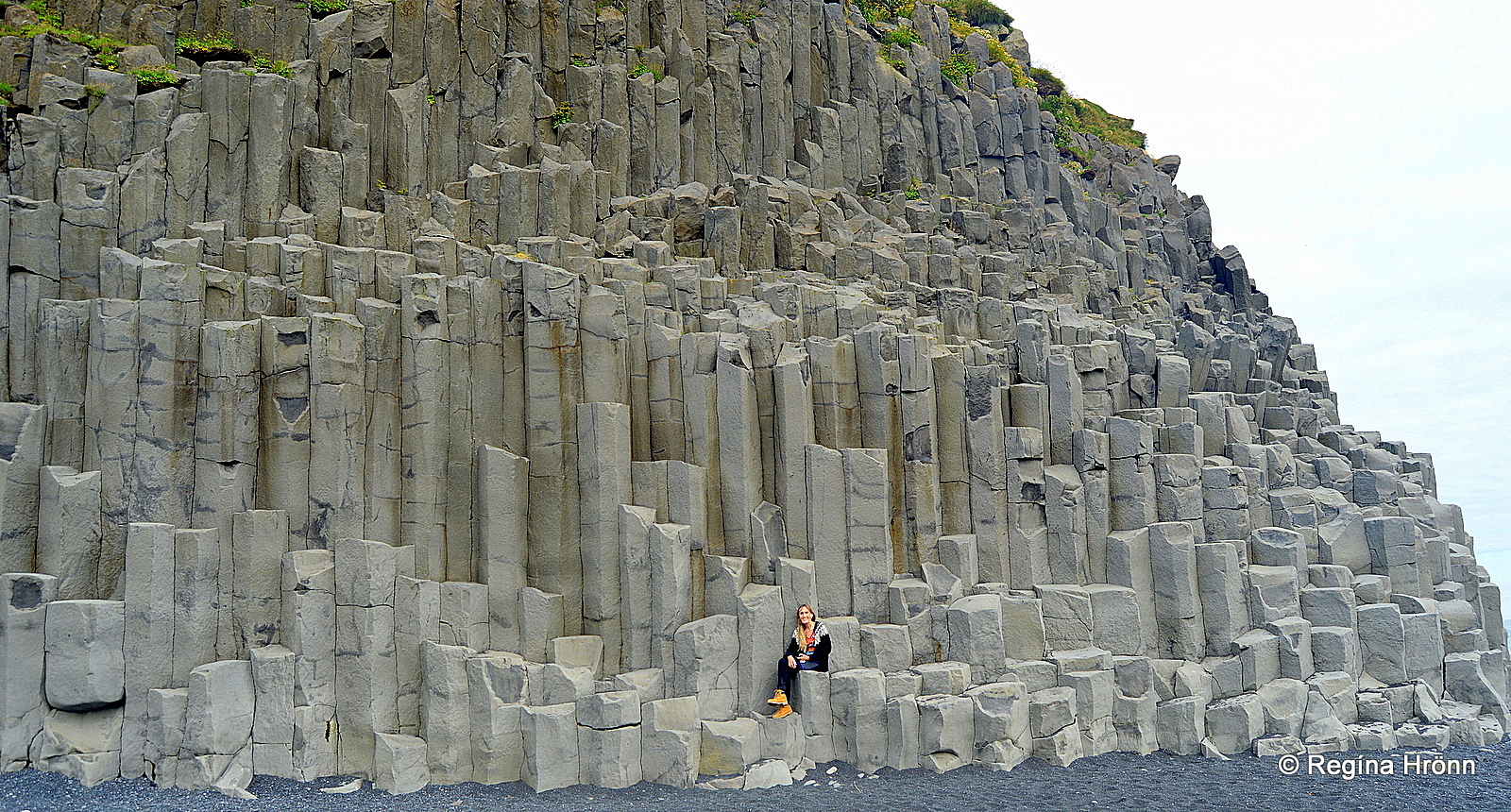 Also, the waves can close the access to the cave. But on a sunny and still day visiting this area is a fantastic experience.

The popular Indian film Dilwale was partly filmed in this location and in many other beautiful locations in South-Iceland.

Reynisdrangar sea stacks and the folklore

Reynisdrangar on a sunny day in relatively calm weather

Icelandic folklore gives us an explanation about what these sea stacks are and why they are here. I found the following story in Þjóðsögur Jóns Árnasonar – the Collection of Folklore by Jón Árnason (Volume IV, pages 41-41) and translated parts of it into English:

“Mt. Reynisfjall reaches the sea, as we know. South of Mt. Reynisfjall 3 quite tall sea stacks are to be found in the sea, together with other reefs that are low and most often submerged.

A bit more wind and bigger waves at Reynisdrangar

The largest of the sea stack is furthest away from land. It is called Langhamar; a very thin, quite long, and very peculiar sea stack, as from it, 3 other sea stacks stand tall.

Old men have said that they remembered when the two westerly sea stacks on the reef were joined together on top, which must have made the sea stack resemble a three-mast ship in full sail.

Crowds at Reynisfjara just after a big landslide fell in Mt. Reynisfjall

One of the sea stacks is called Háidrangur (Tall sea stack) or Skessudrangur (Giantess sea stack) even though it doesn’t have the figure of a giantess, as it is very tall but quite thin with a large hole in its lower part. And it looks like it is placing one foot on top of a low reef.

Old men also say that it looked like a clenched arm and there had been a hole where the elbow could be placed. The upper part of the sea stack looks like a head and a neck.

The third sea stack is called Landdrangur (Land sea stack), as it stands so close to land that one can almost walk to it on dry land. That sea stack doesn’t resemble anything”. 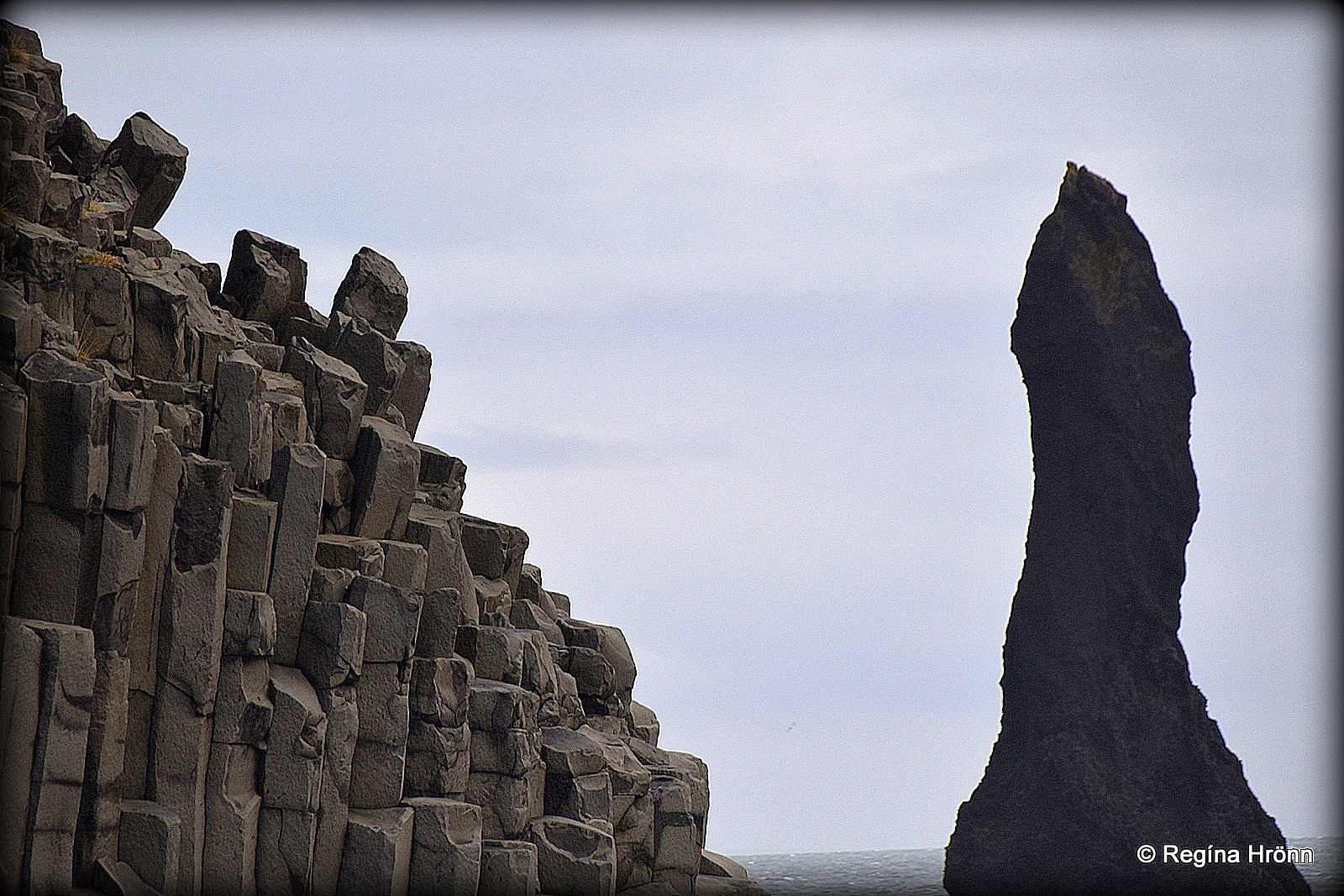 Another legend tells us that the sea stacks were two trolls who were dragging a three-mast ship ashore one night.

Unfortunately, for the trolls, the night was shorter at that time of the year than they had expected.

So at the break of dawn, the rising sun cast its rays on the two trolls, who were then turned into stones or sea stacks along with the ship they were dragging ashore. 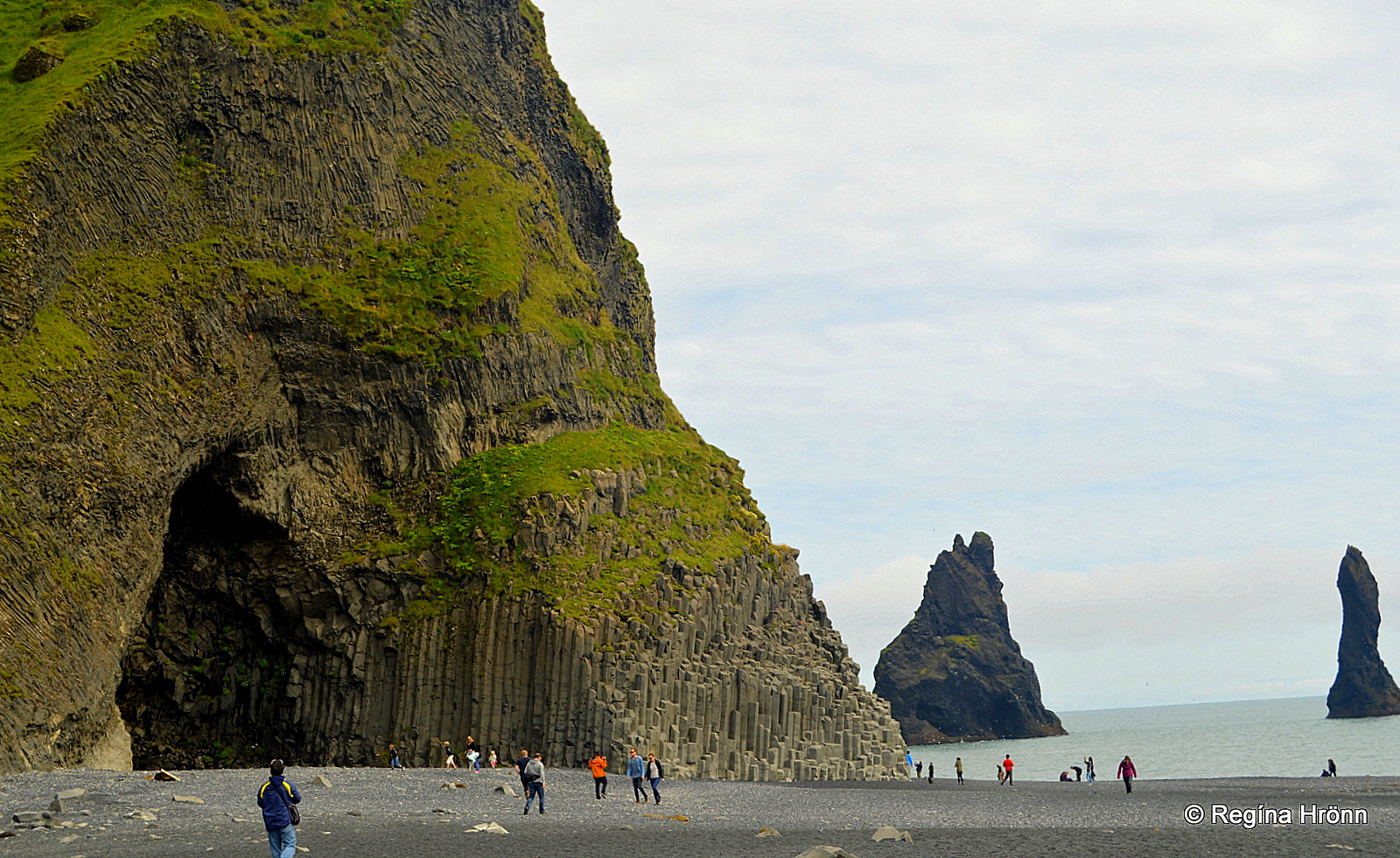 Iceland’s old folklore is filled with such stories about sea stacks and pillars of rocks, that were trolls who got petrified when they saw the sun.

I have told you many such stories in my other travel-blogs, f.ex.:

The 3 trolls who wanted to separate the Westfjords Region from the mainland of Iceland – Icelandic folklore. 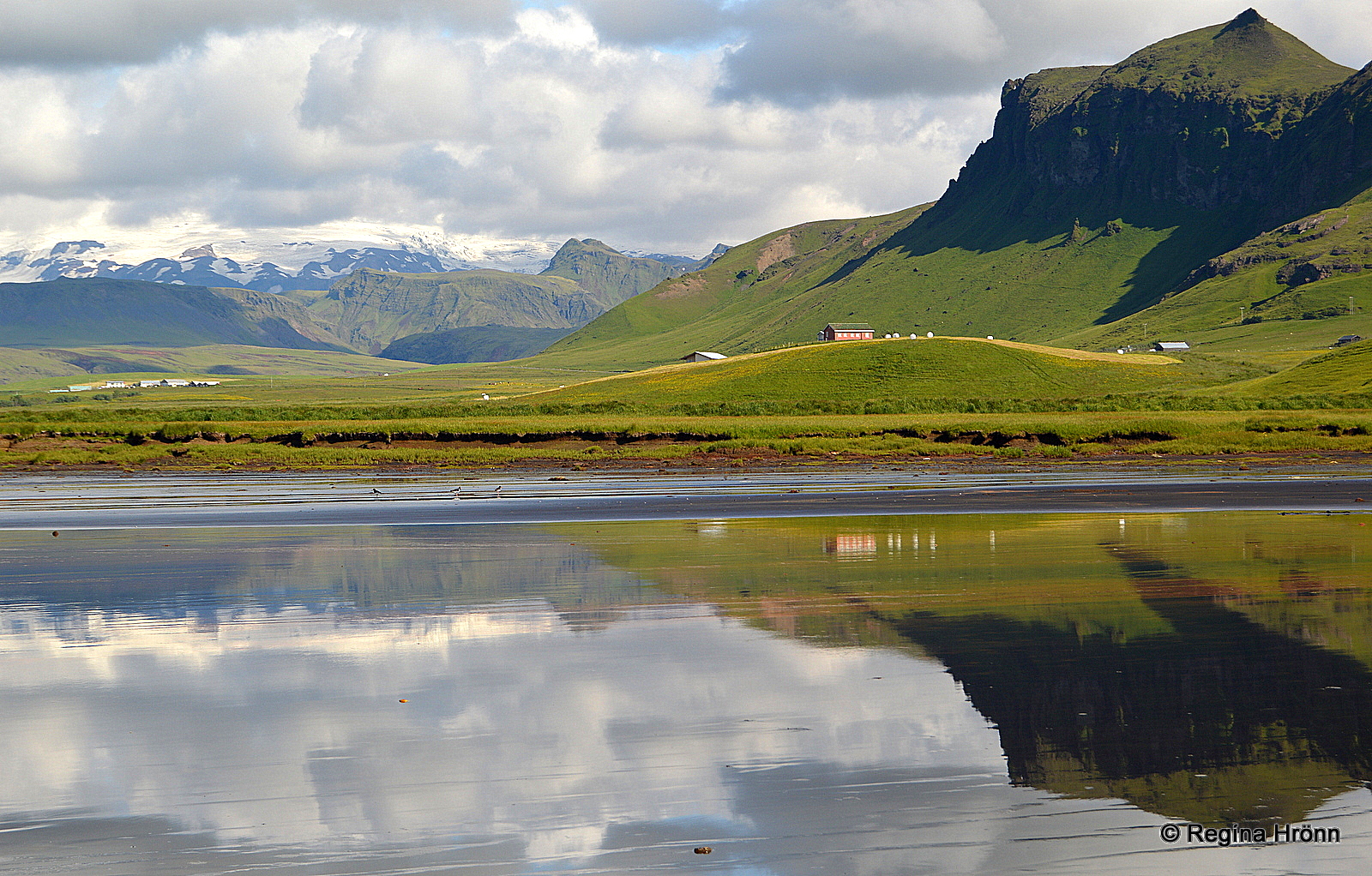 Mt. Reynisfjall, the mountain which divides Reynisfjara and Víkurfjara black beaches, is a 340 meters (1,115 ft) tall palagonite ridge which erupted in the penultimate Ice Age under the glacier.

Reynisdrangar sea stacks were formed in the same way as the ridge and were most likely a part of the Reynisfjall palagonite ridge. The core is what is left behind after the crushing waves have washed away the softer palagonite. 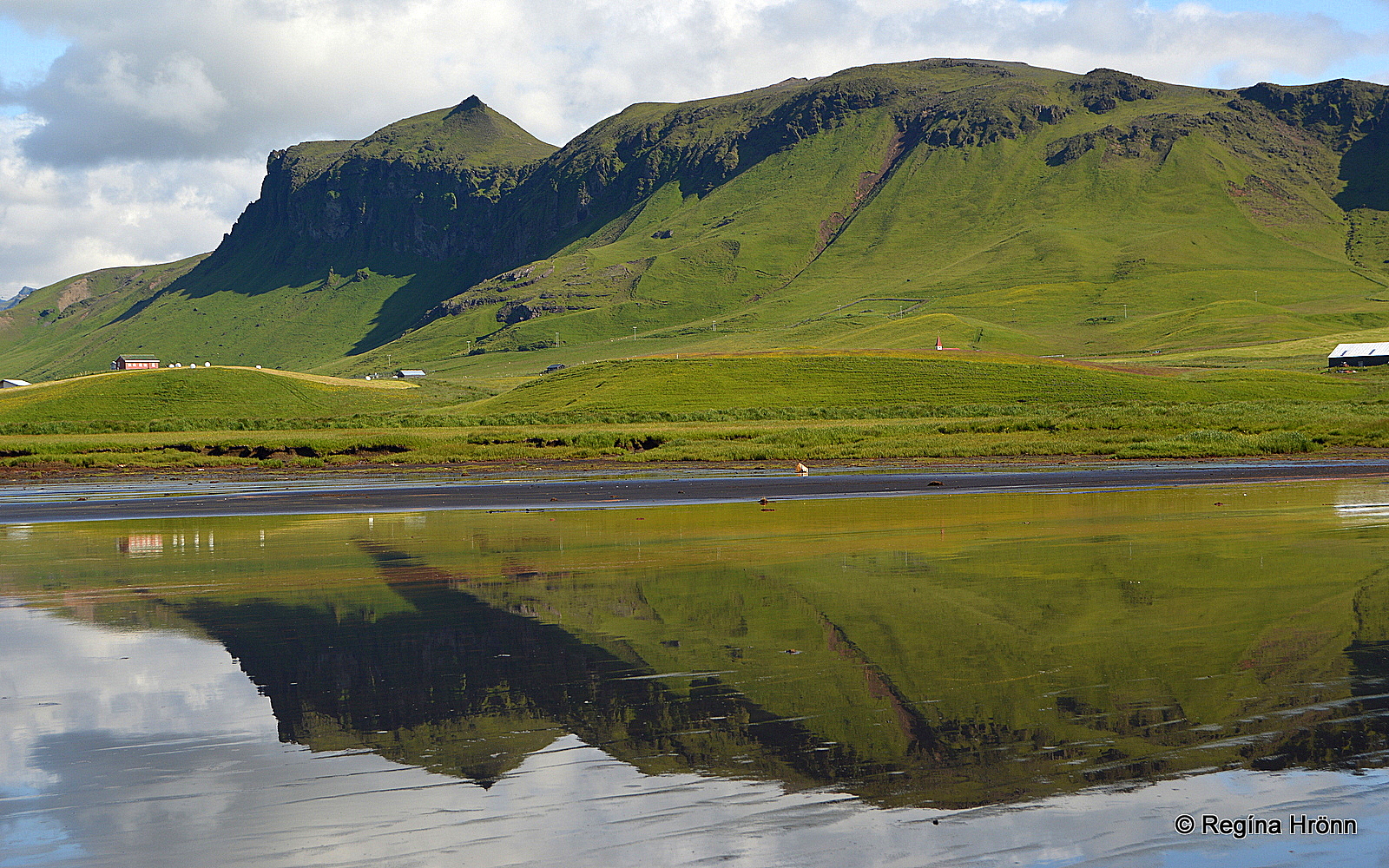 On the website of Katla geopark you can see many more photos of Reynisfjara beach, which is one of the geosites in the geopark, and how high the sea goes when it closes off access to the Hálsanefshellir cave. 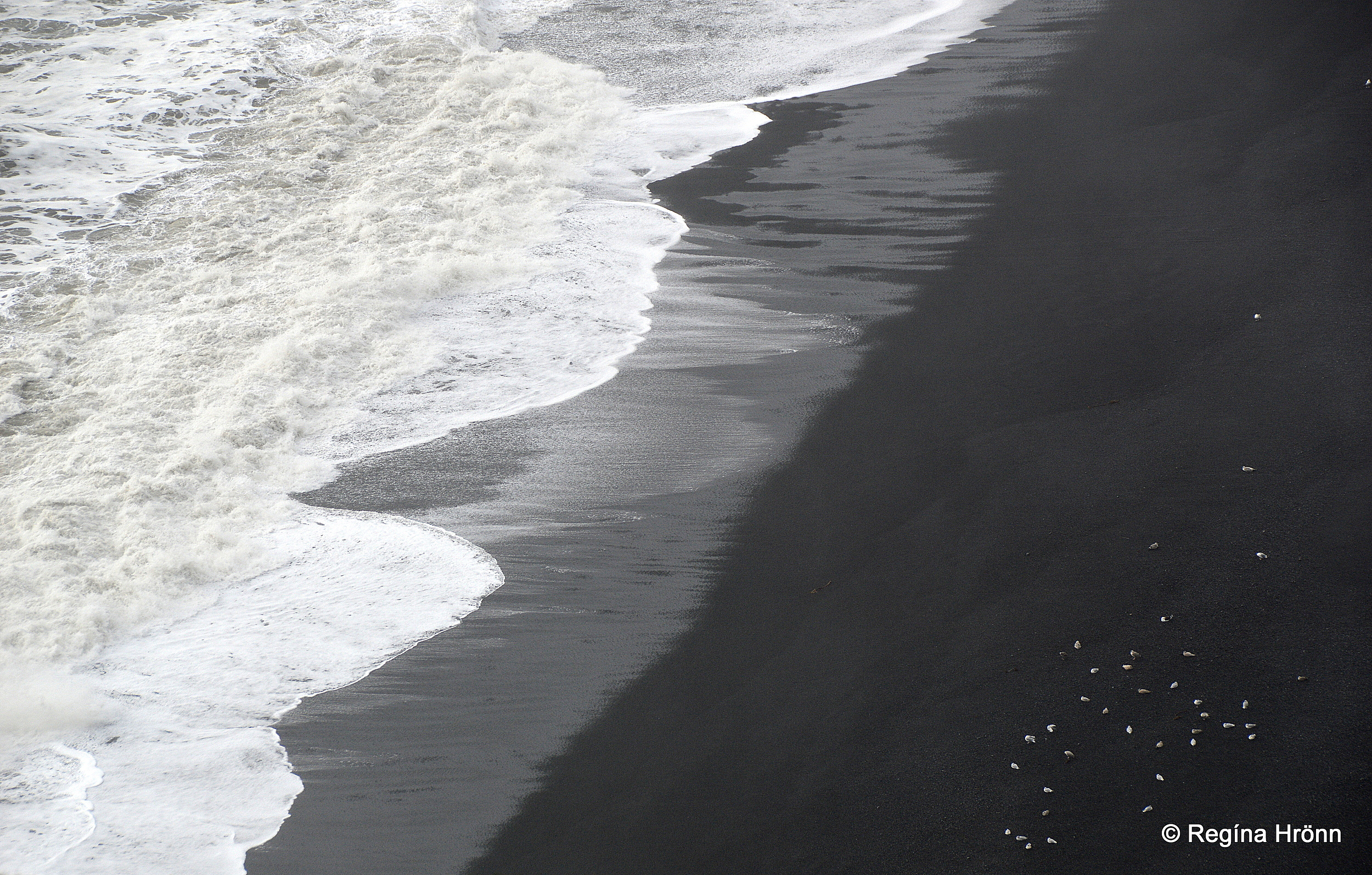 Most of Iceland’s beaches are black apart from some beaches on the Snæfellsnes peninsula and in the Westfjords of Iceland.

We Icelanders didn’t realize how big an attraction the black sand beaches are to our foreign visitors, as we are so used to them. 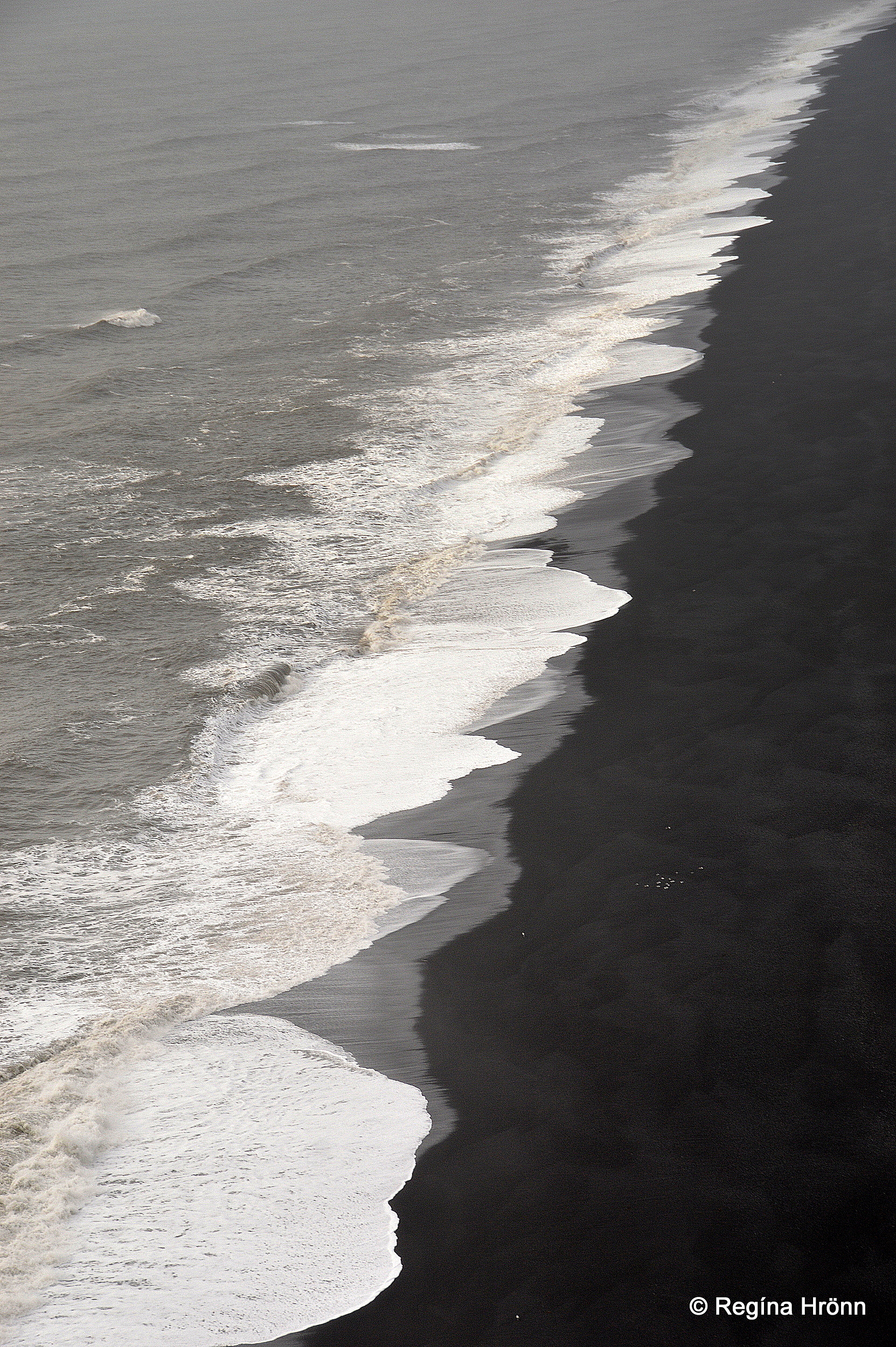 But now we know better and point them in the direction of Reynisfjara beach and Dyrhólaey, which I showed you in my last travel-blog: Cape Dyrhólaey in South-Iceland – the One with the big Arch.

The black sand is crushed lava from the volcanoes and sediments from the glaciers, thus the pitch-black color. 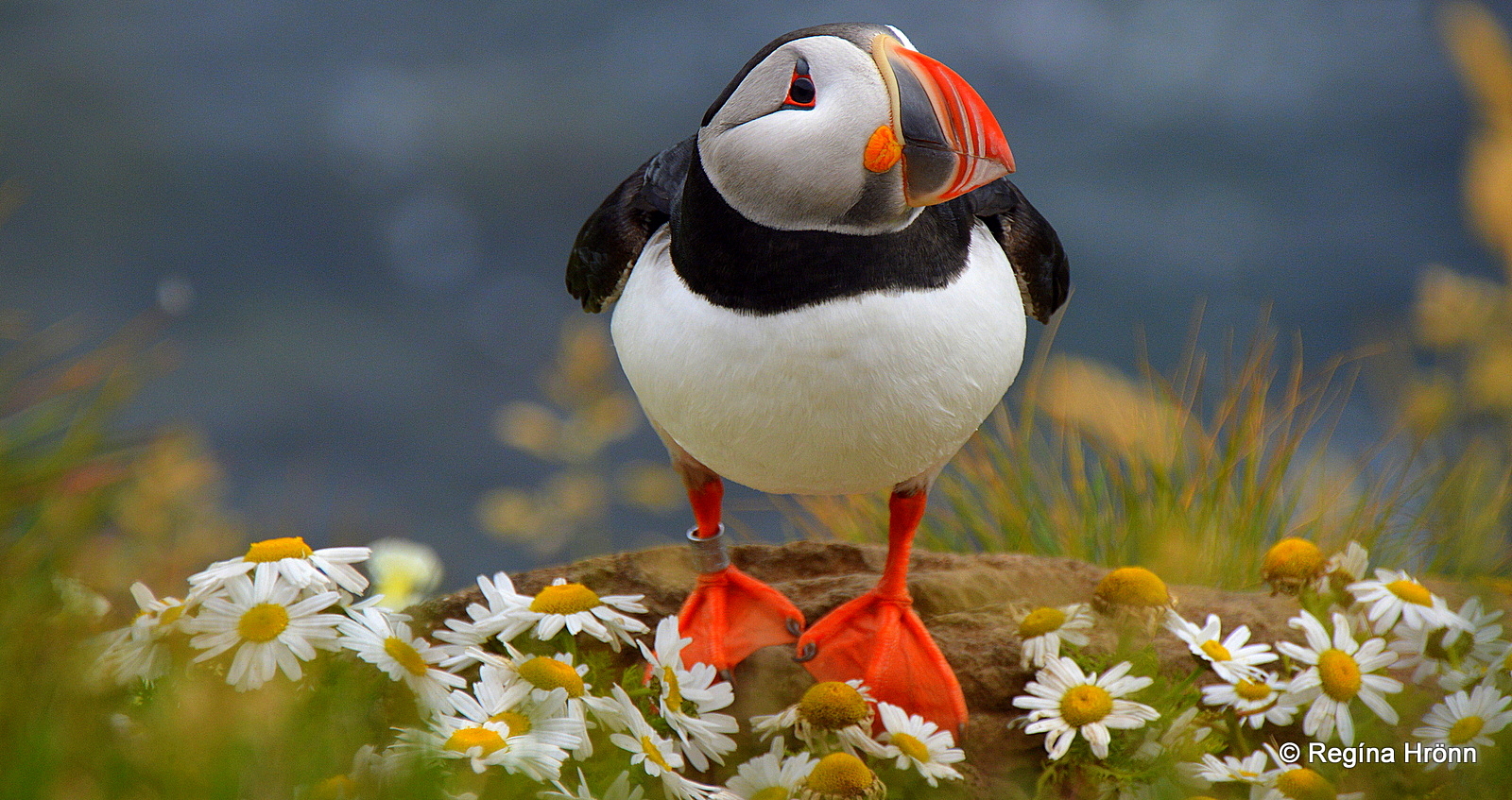 A puffin in Iceland

Puffins and other seabirds nest in Mt. Reynisfjall and Garðar cliffs. The cute puffin is very close to becoming the national bird of Iceland instead of the falcon, as it is so popular with our foreign visitors.

The puffins make burrows and lay one egg only. While visiting Reynisfjara beach you will see them flying back and forth to their nest and floating on the sea.

It is quite cute to see them fly as they flap their short wings very fast. 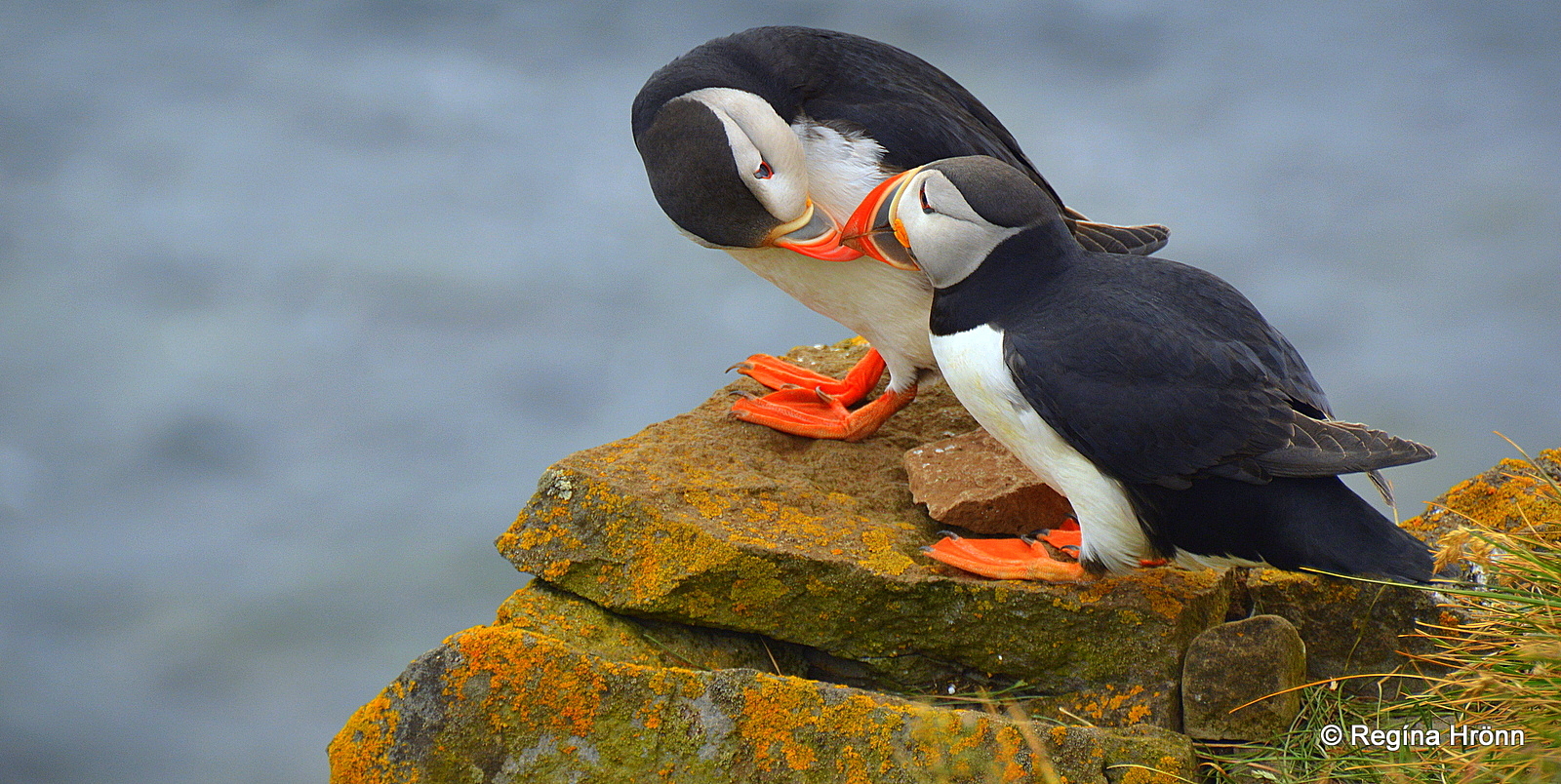 The puffin is a beautiful bird that gets its bright orange color only during the breeding season in the summertime.

In the wintertime, they stay out at sea.

Many more seabirds nest in this area, f.ex. the fulmar and guillemot. 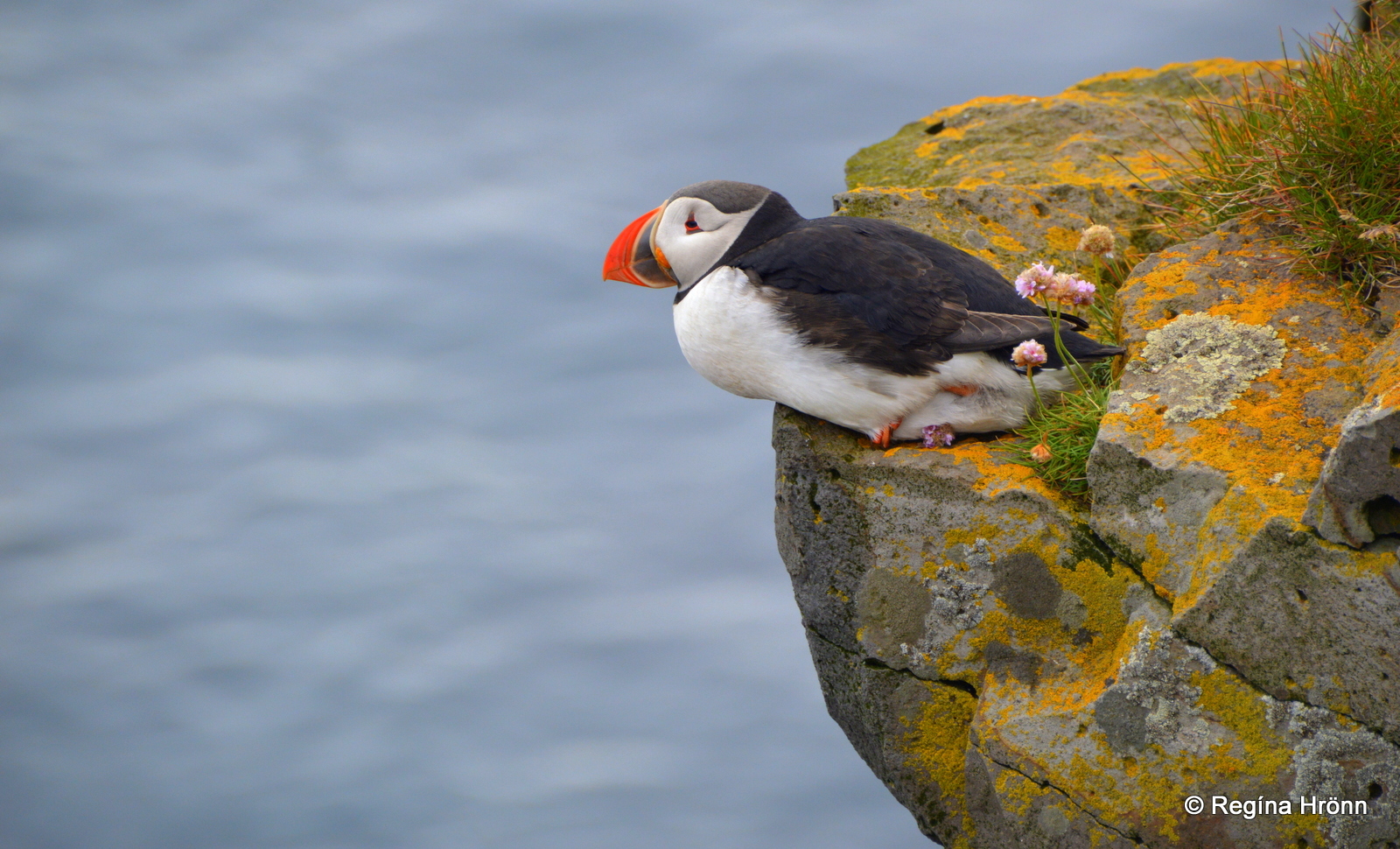 Living on the edge

We have, unfortunately, seen some disturbing behavior regarding the interest some people show in the puffins – like climbing the basalt columns to get closer to the nesting puffins.

Some people even get stuck in the basalt columns and have to be rescued. 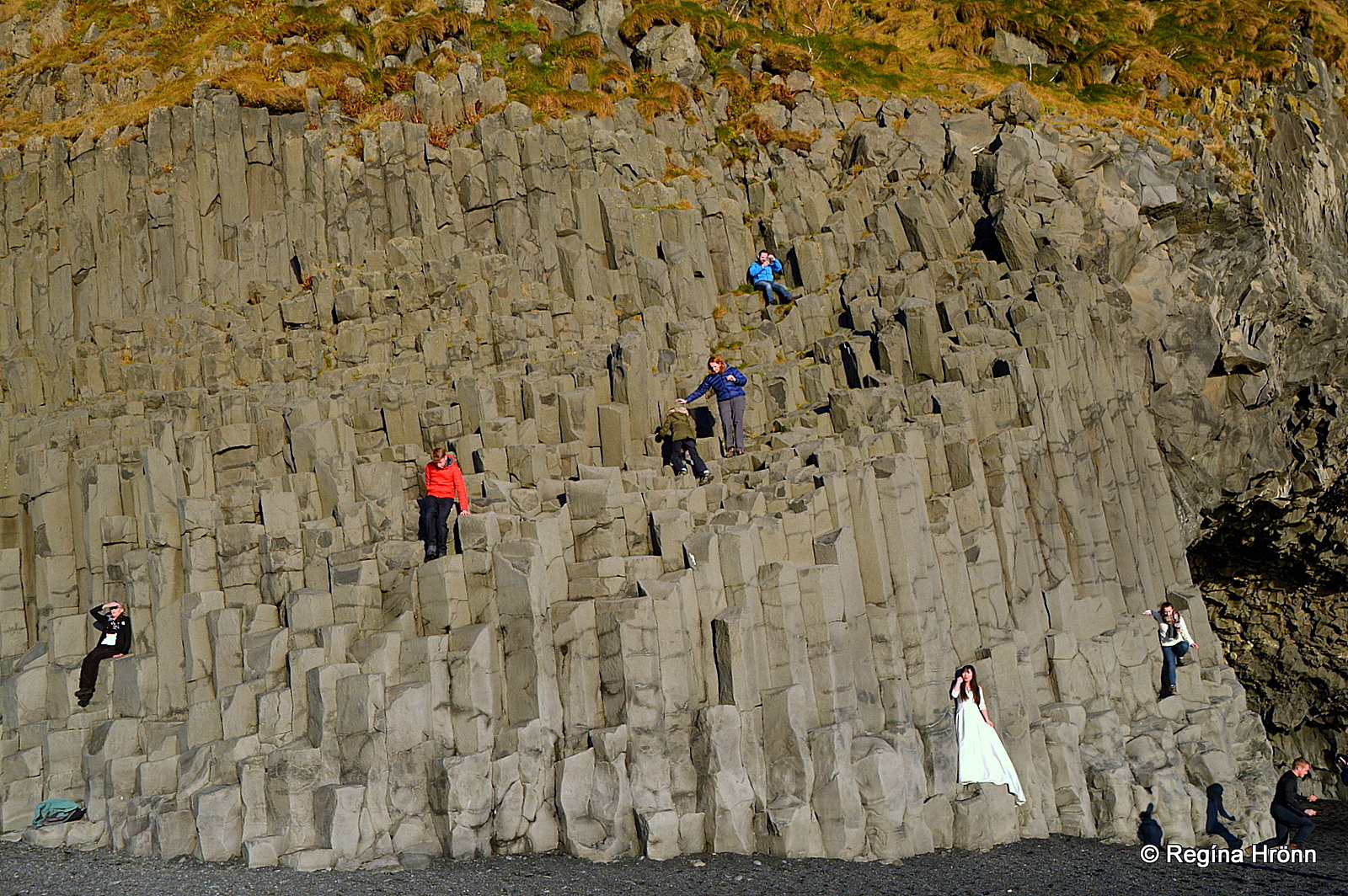 People climbing way too high up in the basalt columns

This is stressful for the puffins, so let’s leave them alone and use the zoom to get decent photos and admire this beautiful bird from afar.

Plus that it is never safe to climb in the basalt columns.

Defying the waves is never a good idea at Reynisfjara beach

The disadvantage of visiting the beautiful Reynisfjara beach is the sneaker waves which have given this beautiful beach quite a notorious reputation.

Let’s always be very careful here and never turn your back to the sea.

The sneaker waves are unpredictable and come in unexpectedly and creep up on us, so to speak, that is why they are so dangerous. People lose their footing in the sand and the suction of the sneaker waves can drag people out to sea.

Or they just swirl people around and around which is why this beach is sometimes referred to as the washing machine.

Running away from the waves

Warning signs have been put up by Reynisfjara, but most people seem to ignore them. In my opinion, a red light should be flashing above the warning signs to draw attention to them.

Of course, it is ok to visit Reynisfjara beach and every day a myriad of visitors come to admire its beauty.

Let’s just be aware of the sneaker waves and read the warning signs, so that we can make an informed decision about how close to the sea we feel is safe for us. 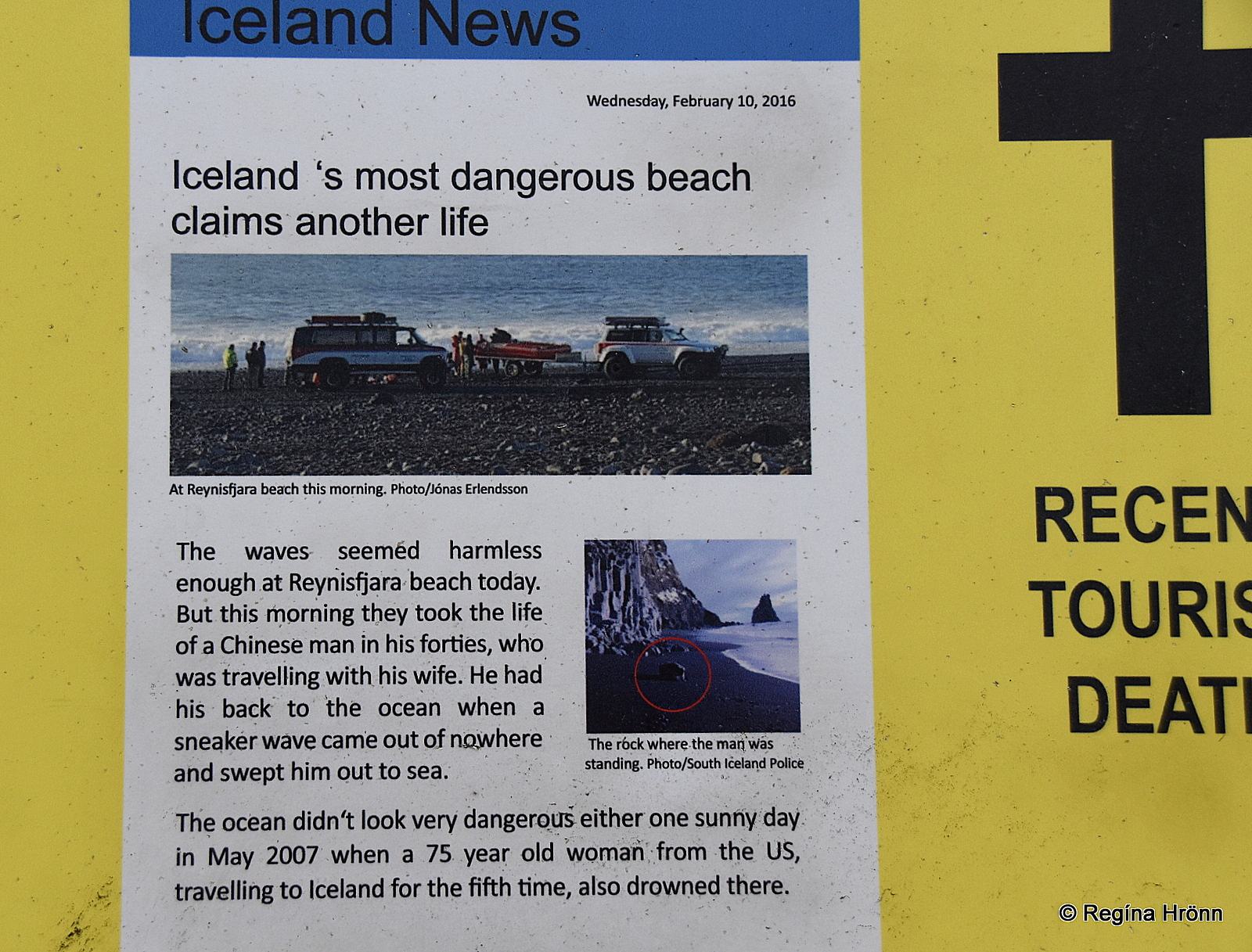 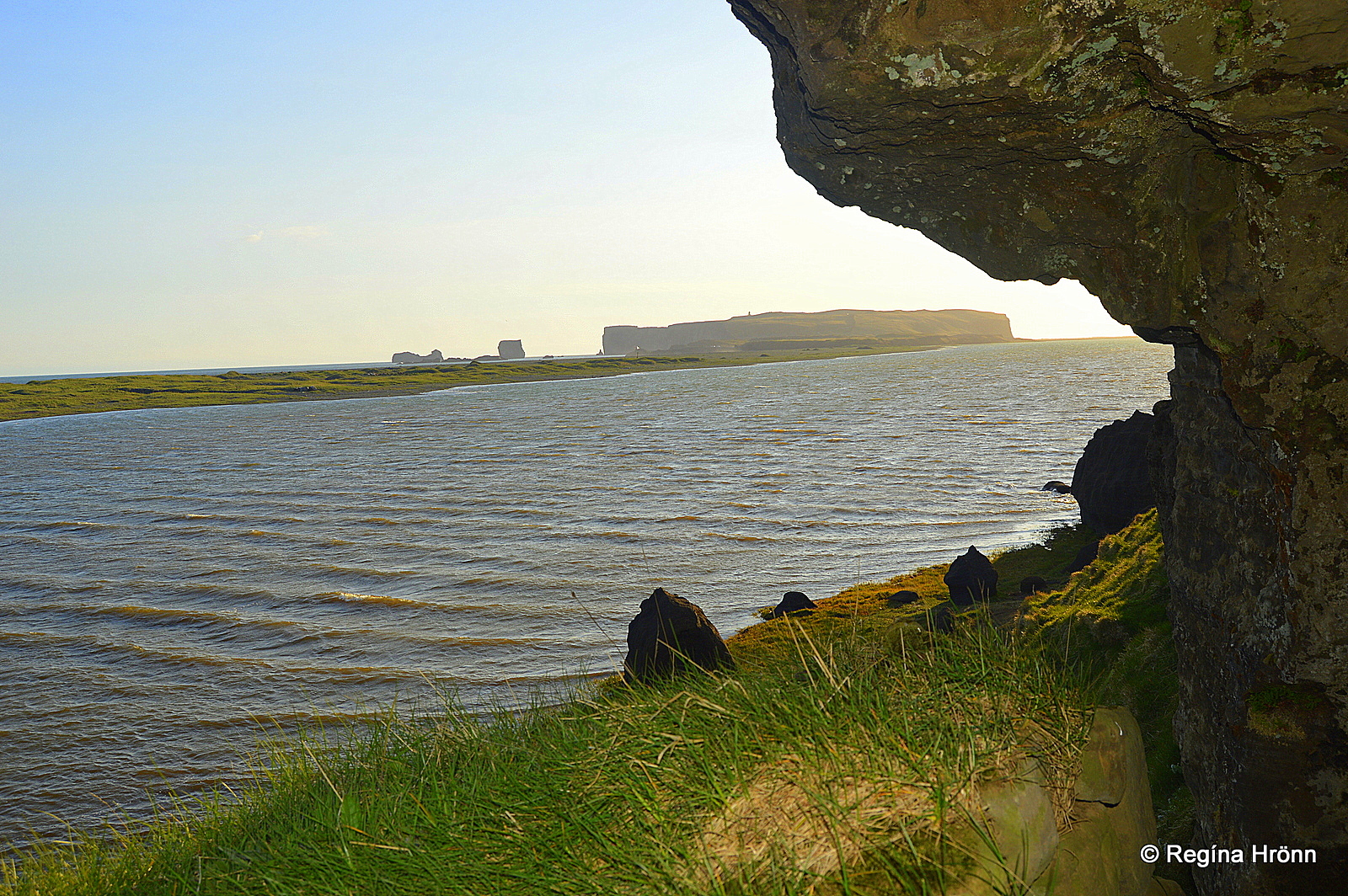 Looking west from the cave – Dyrhólaey in the distance

In Reynishverfi on Hellnaskagi (the small protruding cape) another cave is hidden away, not visited by many.

It is a small historic cave, but seeing that I love Iceland’s history I am going to show it to you.

This cave is called Baðstofuhellir or Bæjarhellir. It is also referred to as Hellir Eldklerksins – the Cave of the Pastor of Fire as in it lived for a while one of the best-known pastors in South-Iceland. 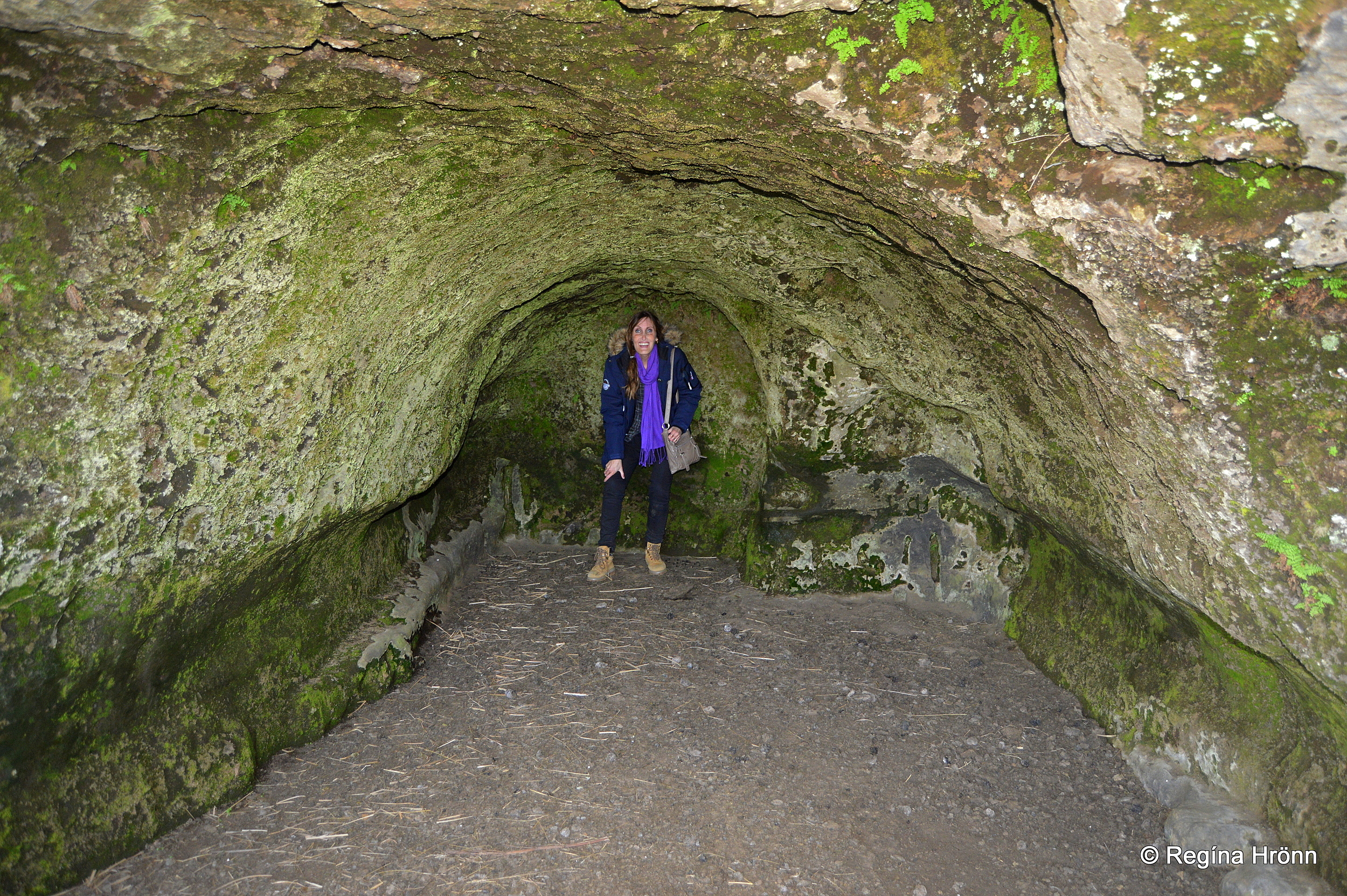 His name was Jón Steingrímsson (1728-1791) and he is most often referred to as Eldklerkurinn – the Pastor of Fire.

Jón spent the winter of 1755 (before he became a pastor) in this cave with his brother Þorsteinn.

The cave is a sandstone cave and Jón expanded it so that he could fit in a table and a bench and his bed. 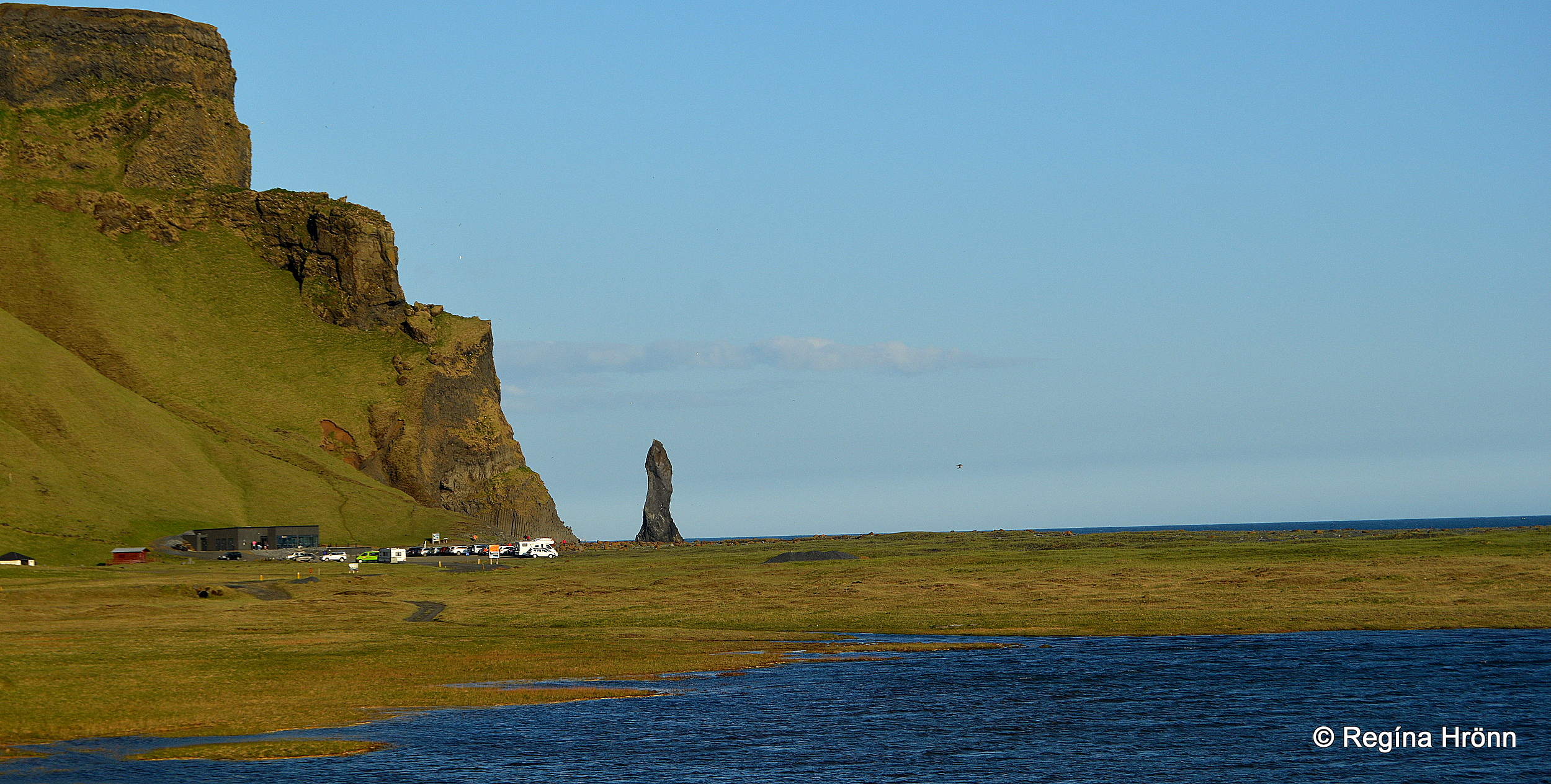 Looking east to Reynisfjara and Reynisdrangar

It is a small cave, only approximately 6 meters long, a little less than 3 meters wide, and 2 meters tall, but in it lived 2 men.

The cave was adjacent to the farmhouse and was an additional room of the farm, so it looked quite different back then.

Jón was later referred to as the Pastor of Fire after he delivered the Mass of Fire back in 1783 during the Skaftáreldar volcanic eruption in Lakagígar. 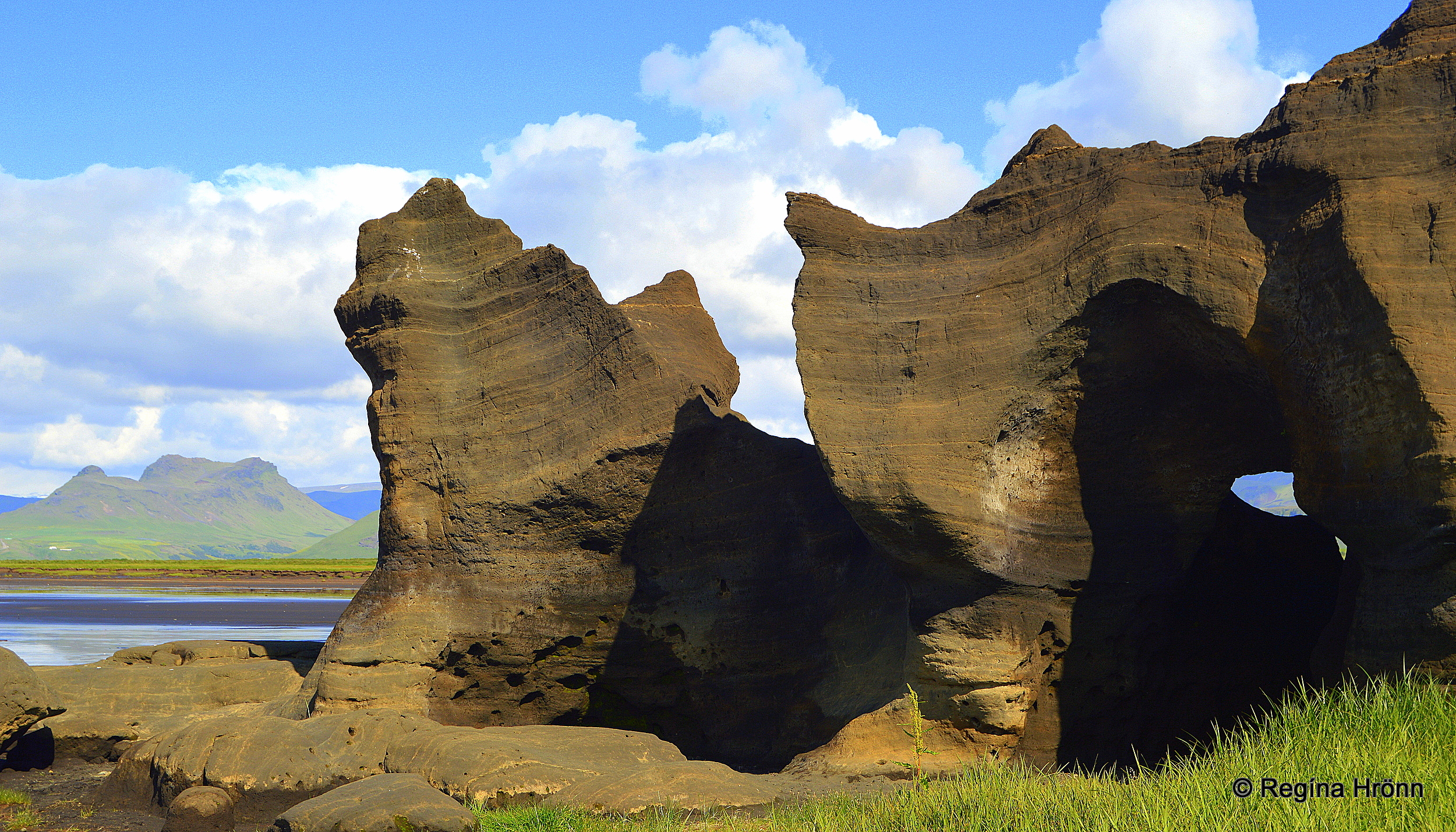 The sandstone rock takes on all kinds of shapes

A branch from the lava flow from this massive volcanic eruption, which is the greatest calamity in Iceland’s history, was only 2 km away from the church in Kirkjubæjarklaustur.

People gathered in the church and the congregation and pastor Jón prayed with fervor. A miracle happened – the lava flow stopped in its track!

You can read more about this miraculous event in my travel-blog: The historic Kirkjubæjarklaustur in South-Iceland. 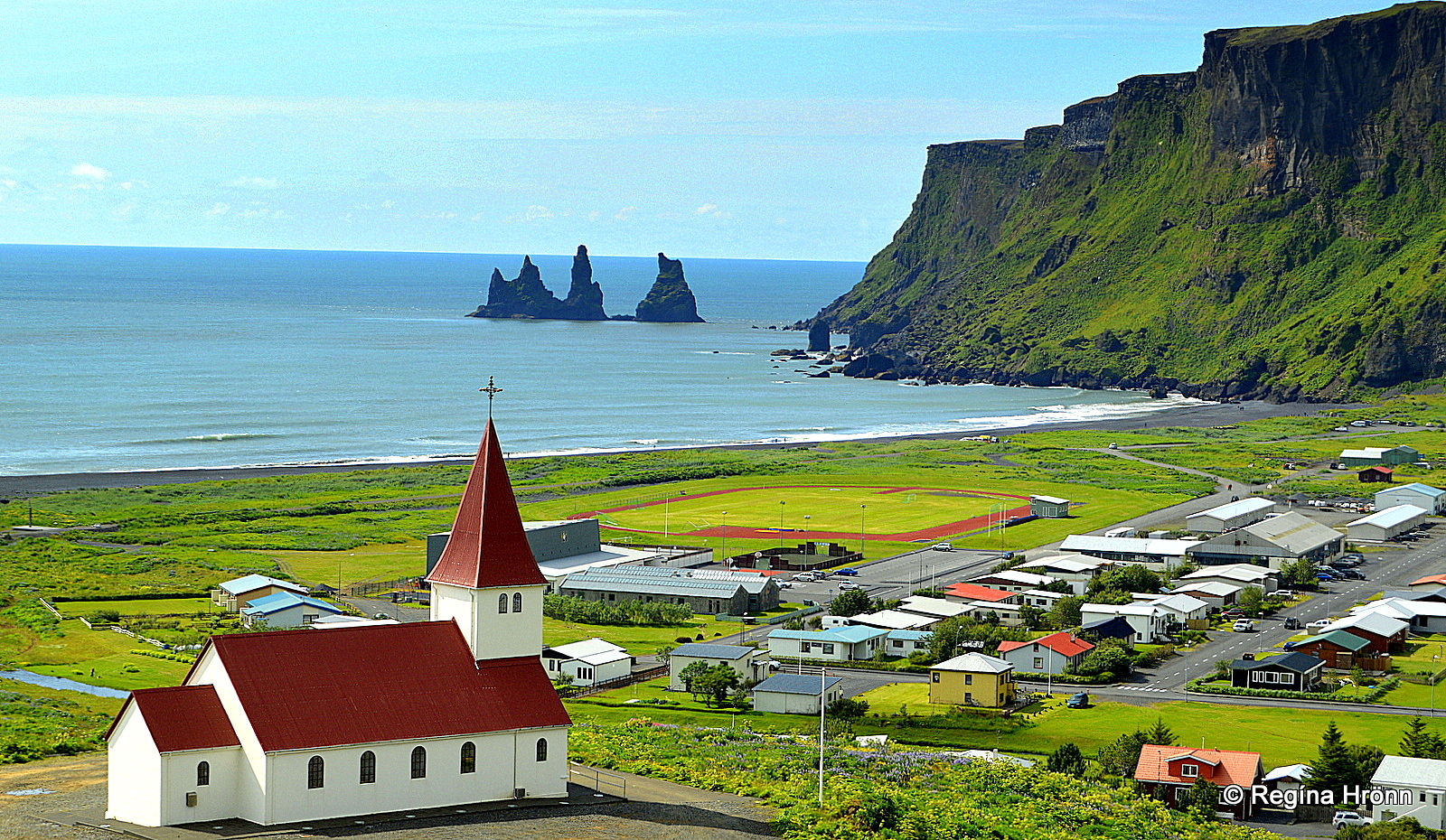 On the other side of Mt. Reynisfjall you will find the lovely village Vík, where you have a different view of Reynisdrangar sea stacks.

Drive to the end of it where you will find a parking lot and Svarta fjaran – the Black Beach restaurant.

In my next travel-blog I am going to show you Skaftafell nature reserve and Svartifoss waterfall which is set in beautiful basalt columns.

Have a lovely time at Reynisfjara beach and stay safe!