One of the Geosites in the Katla Unesco Global Geopark in South-Iceland is the 120 meters tall Dyrhólaey promontory. 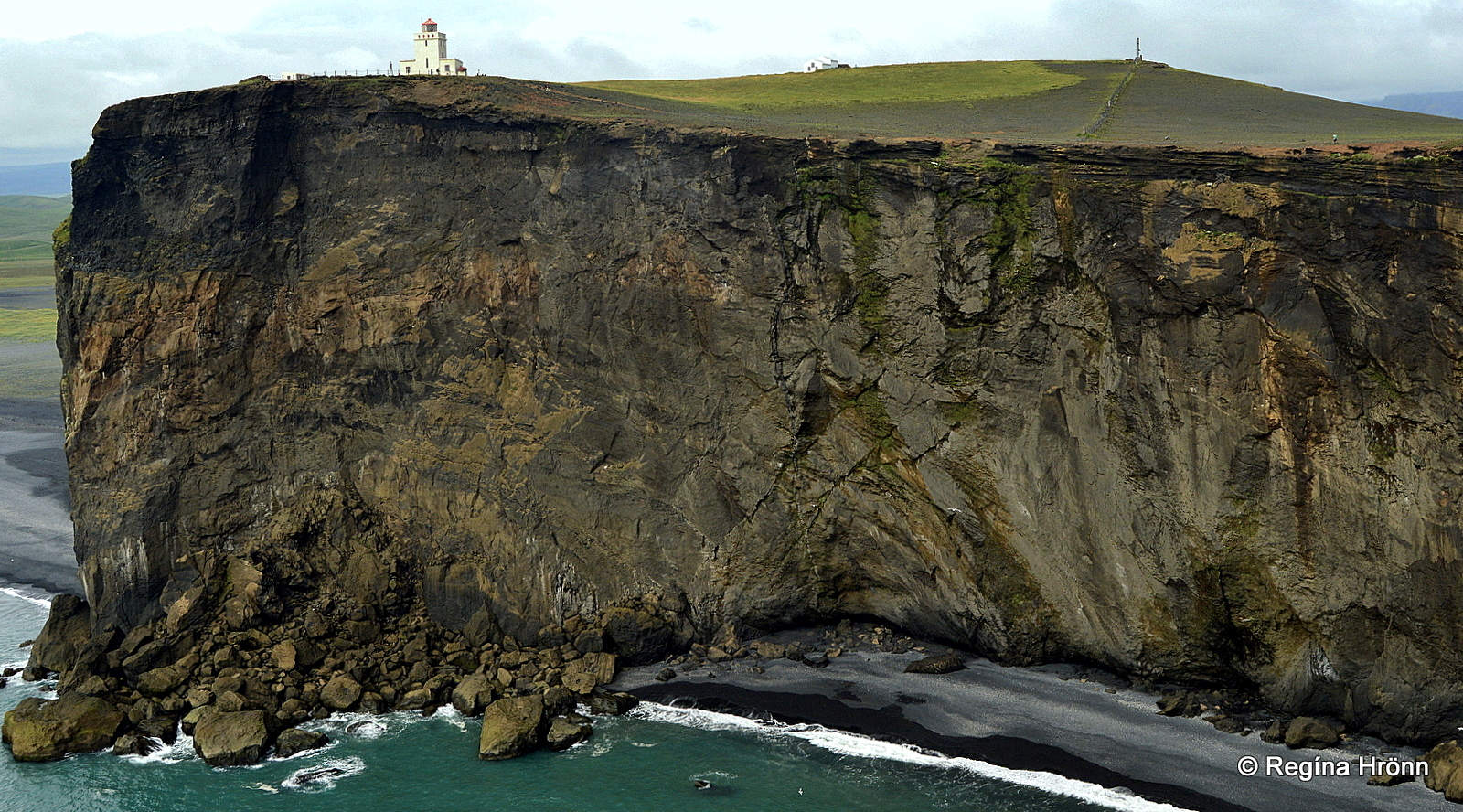 Dyrhólaey and the lighthouse at Háey

The name Dyrhólaey literally means Door Hill Island, as the former island is named after its most prominent part – the big arch or door in the sea cliff.

Dyrhólaey and the big arch

Dyrhólaey wasn’t always a promontory as it was most likely formed in 2 submarine eruptions some 80,000 – 100,000 years ago, which created a volcanic island that slowly emerged from the sea.

Another such submarine eruption took place here in the vicinity much closer in time (from 1963-1967) when the protected Unesco site, Surtsey island emerged from the sea.

The sea, wind, and the glaciers have eroded away the major part of Dyrhólaey island and left many sea stacks behind, which are the remnants of old volcanic plugs.

Dyrhólaey is divided into two parts, Háey and Lágey – or the High Island and the Low Island. Háey is a palagonite or tuff and Lágey is mainly made of gray basalt.

The southern part of Dyrhólaey promontory is the 100 meters tall strip Tóin, with vertical cliffs and the famous arched shape opening in the middle.

Let’s first visit Háey – the High Island as the western part of Dyrhólaey is called and drive up the steep hill to the parking lot at the top. 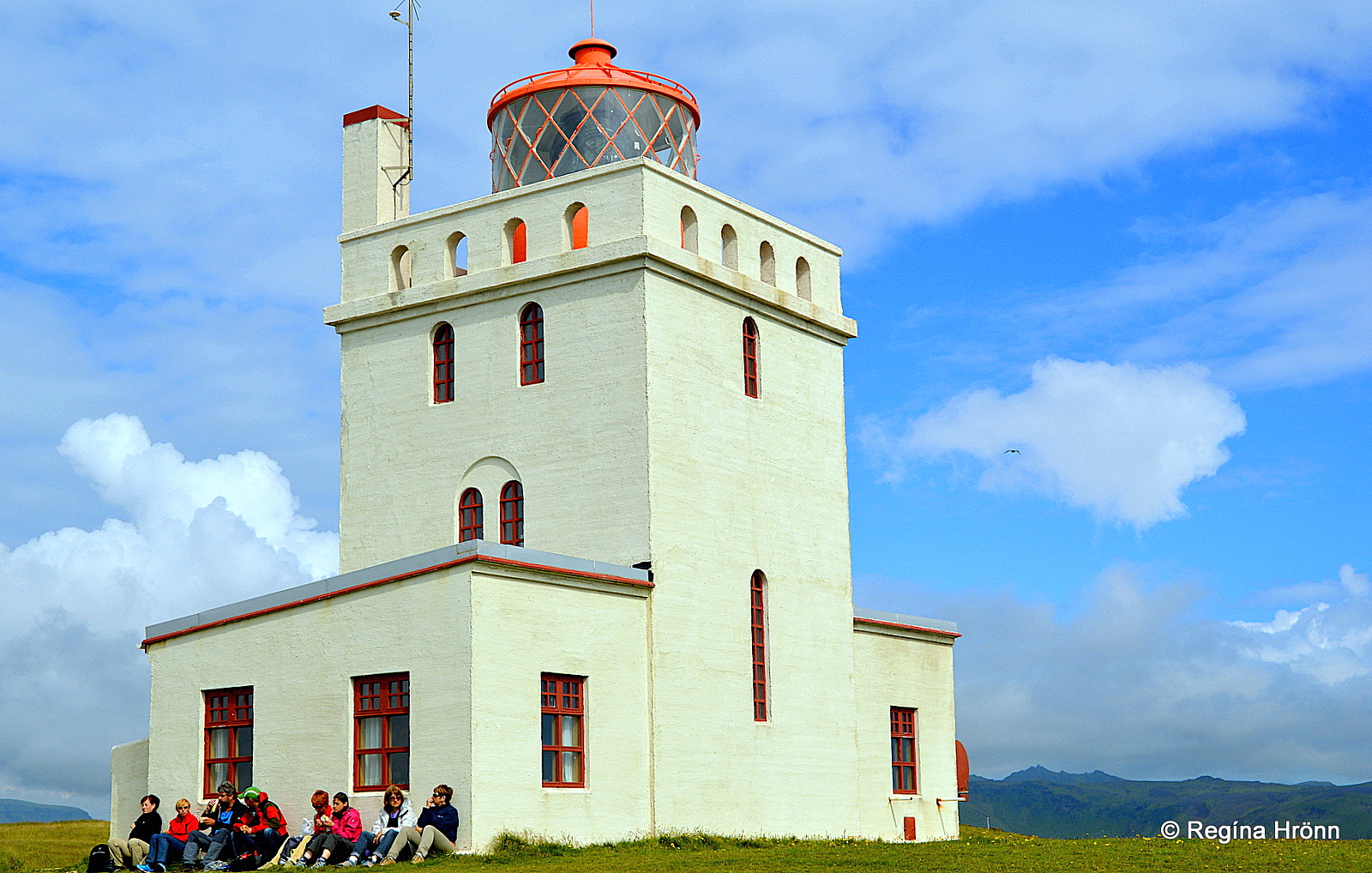 The first lighthouse in Dyrhólaey was erected in 1910, a skeletal tower from Sweden, the first of its kind in Iceland.

The castle-like lighthouse which we now see at Dyrhólaey was erected in 1927 and protected in 2003. 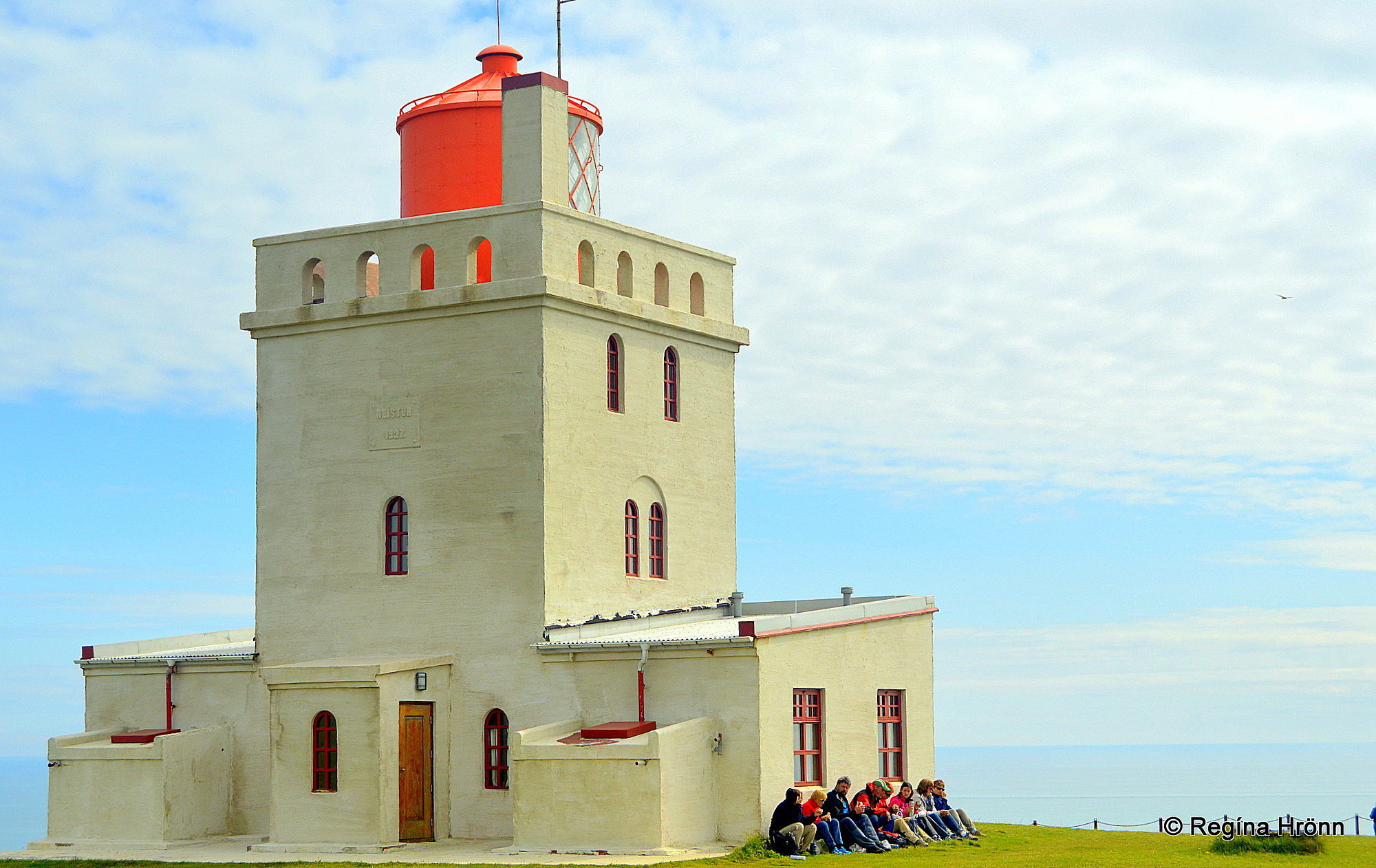 The noted State Architect Guðjón Samúelsson drew the preliminary design of the tower, but Guðjón designed many of Iceland’s finest buildings, f.ex. Akureyrarkirkja church, which I showed you in my Akureyri travel-blog.

This lighthouse in Dyrhólaey has got the brightest lantern and strongest light of any lighthouse in Iceland and the beam can be seen flashing every 10 seconds at a 43 km distance. 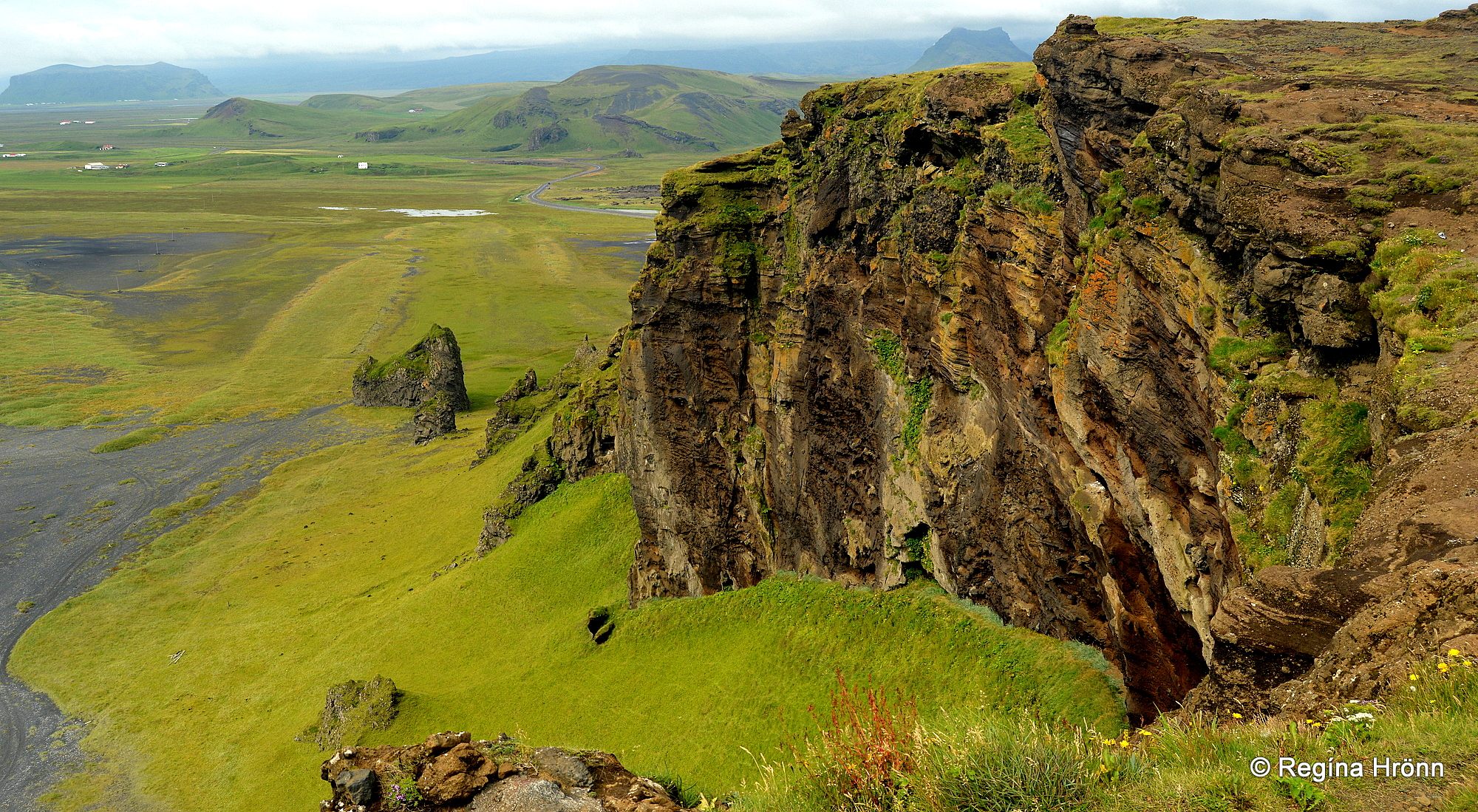 One of the things that make Dyrhólaey stand out on the south coast of Iceland is that on the whole coastline between Þorlákshöfn town and Höfn in Hornafjörður in SE-Iceland, there are only 3 sea-cliffs to be found.

The first one is Dyrhólaey, then we have the close-by Mt. Reynisfjall, which I am going to show you in my next travel blog, and the third one is Ingólfshöfði cape which is much further east.

Then we have a couple of capes which are now totally surrounded by land, but used to be surrounded by the sea such as Pétursey island and Hjörleifshöfði promontory, which I have shown you in other travel blogs. 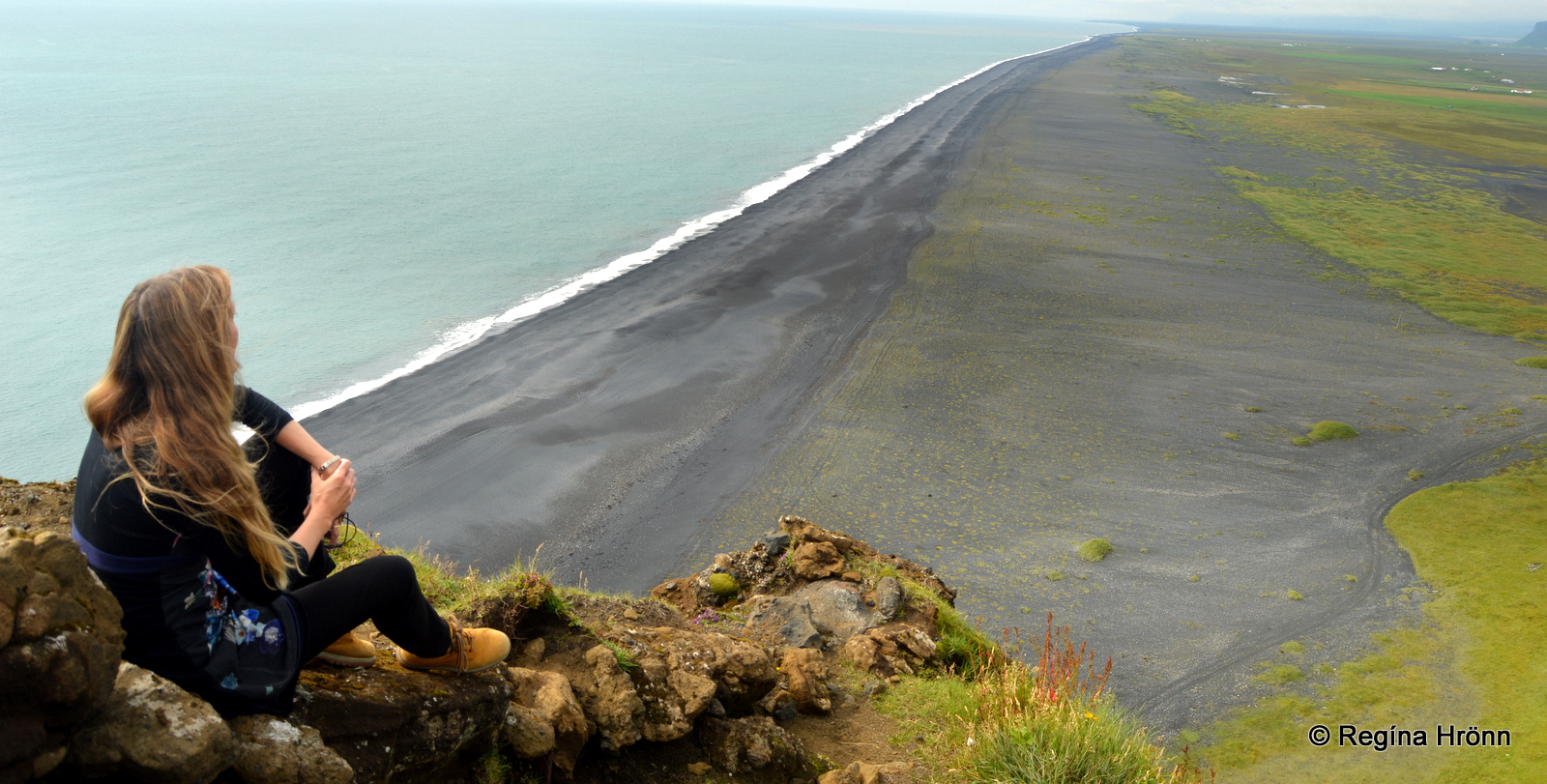 The view from Háey is amazing, and to the west, there is an endless view of the black coastline.

In my photo above which was taken back in 2014, I was sitting on the ledge much like Justin Bieber did in his music video – I’ll Show You (2015).

In his music video, you will see many beautiful locations in South Iceland, amongst them the elegant Seljalandsfoss waterfall – the one which you can walk behind.

This ledge has now been closed off for nature conservation and for our safety. Let’s respect the closure as it turned out not to be safe to sit so close to the edge.

Landslides are common at Dyrhólaey and we for sure do not want to slide down with a landslide like happened to 2 Dutch tourists back in 2012 when they were walking on the path at Lágey above Kirkjufjara beach.

They fell some 40 meters with the landslide down onto the beach. Fortunately, they stayed on top of the screen and thus survived. 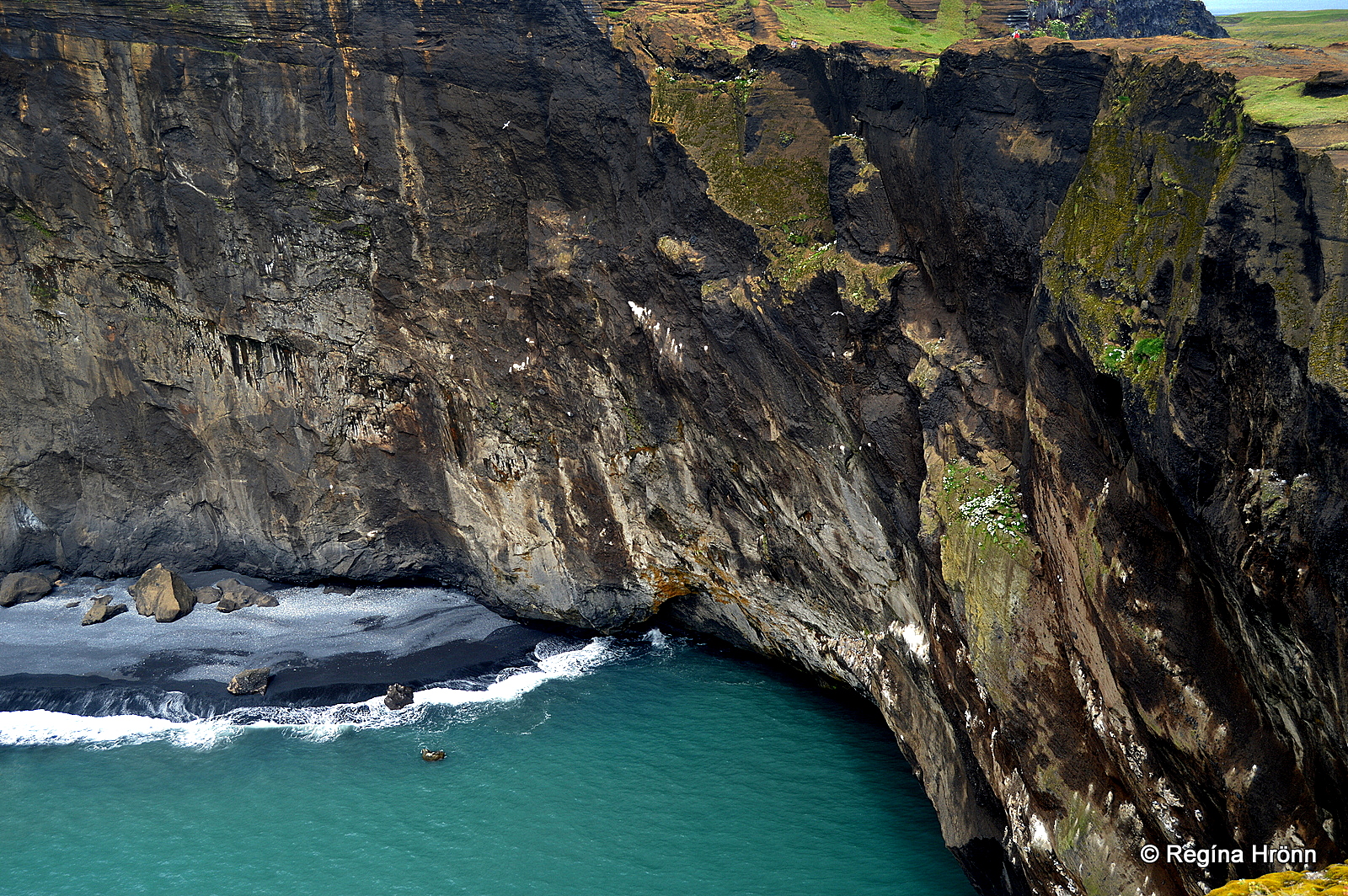 Here, next to the archway there was a massive landslide in 2015

There have been many more landslides in the past few years, a huge one back in 2015, so let’s stay safe at Dyrhólaey and not go close to the edge.

Some of my photos in this travel-blog are from my 2014 visit to Dyrhólaey when access to Tóin was not restricted, but this area was closed off after the landslides occurred. 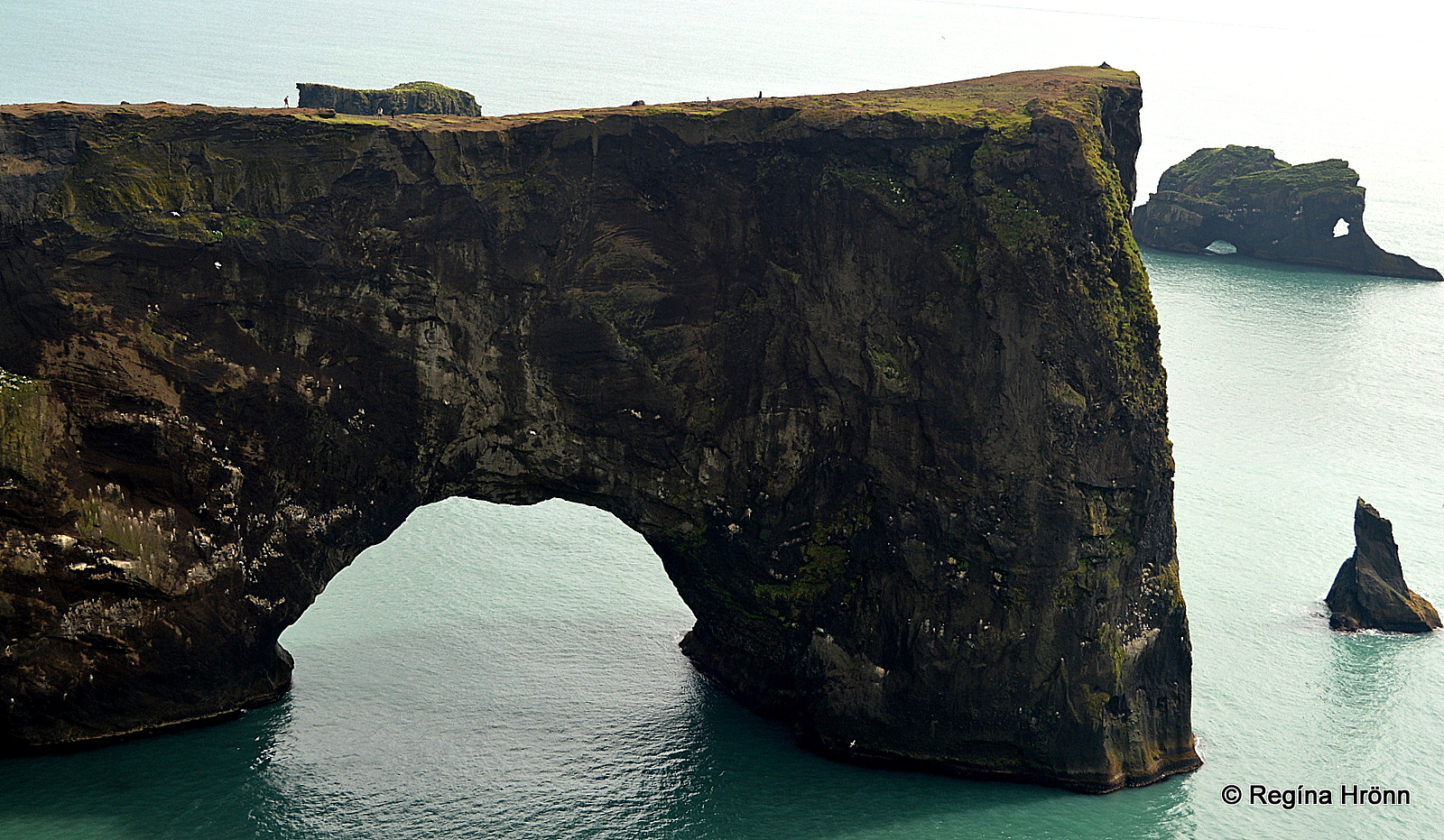 The archway opening in Dyrhólaey

Now, let’s go back to the opening or “door” that gives Dyrhólaey a name.

The first documented flight through the opening was back in October 1993, when a one-engine plane passed through the hole with two men on board.

The opening is 50-60 meters wide and 20 meters high according to the pilot who managed to fly through the opening.

Below is footage from RÚV, our state-run TV station, and an interview with the pilot and the ex-politician who flew with him through the archway opening.

It is in Icelandic, but it is well worth watching them flying through the opening in Dyrhólaey.

On that day they flew through the opening, not once, but 3 times since the weather conditions were perfect and the event was being recorded 🙂

If you visit Fly Over Iceland then you will experience what it must feel like flying through the archway of Dyrhólaey. 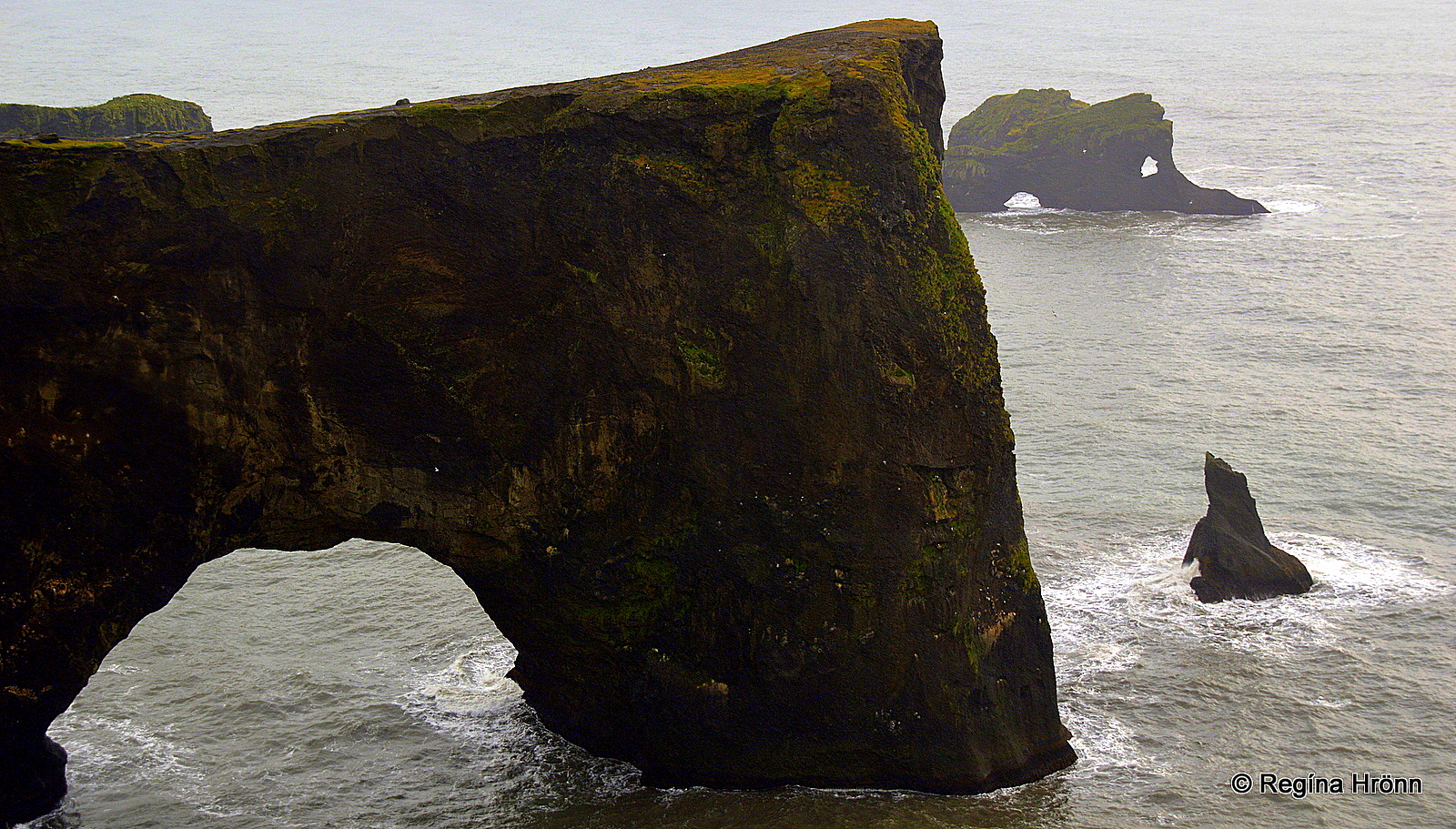 The archway opening of Dyrhólaey and the sea stacks

Dyrhólaey promontory held the record of being the southernmost point on the mainland of Iceland (not counting the Westman islands) until 1918.

In my last travel blog about the Katla ice cave, I told you about the 1918 eruption in the subglacial Katla volcano in Mýrdalsjökull glacier, Iceland’s 4th largest glacier.

The massive eruption and glacial outburst flood carried with it a huge amount of sediments and created the Kötlutangi spit, which reached approximately 3 km further south than Dyrhólaey, thus becoming the southernmost point of the mainland of Iceland. 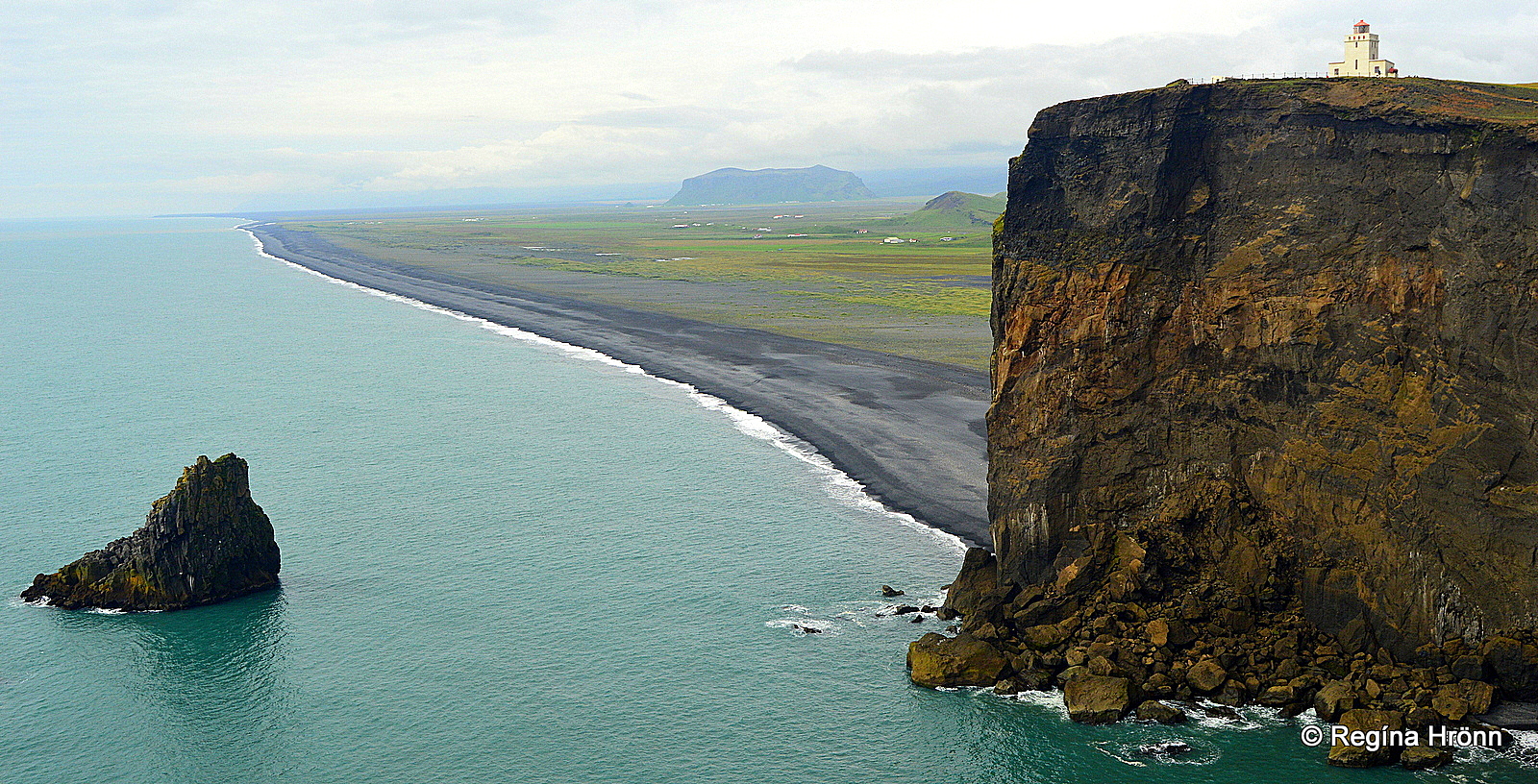 The waves of the Atlantic ocean see to it that our southernmost point is getting shorter and shorter every year, but it still reaches a couple of meters further south than Dyrhólaey (2021) – see my travel blog: Katla Volcano and Kötlutangi – the southernmost Point of the Mainland of Iceland.

One day, i.e. if the Katla volcano will not be erupting soon, Dyrhólaey might regain its record of being the southernmost point of the mainland of Iceland.

But the strong waves also erode away the cliffs of Dyrhólaey as they have done for thousands of years and one day even the arch might collapse. 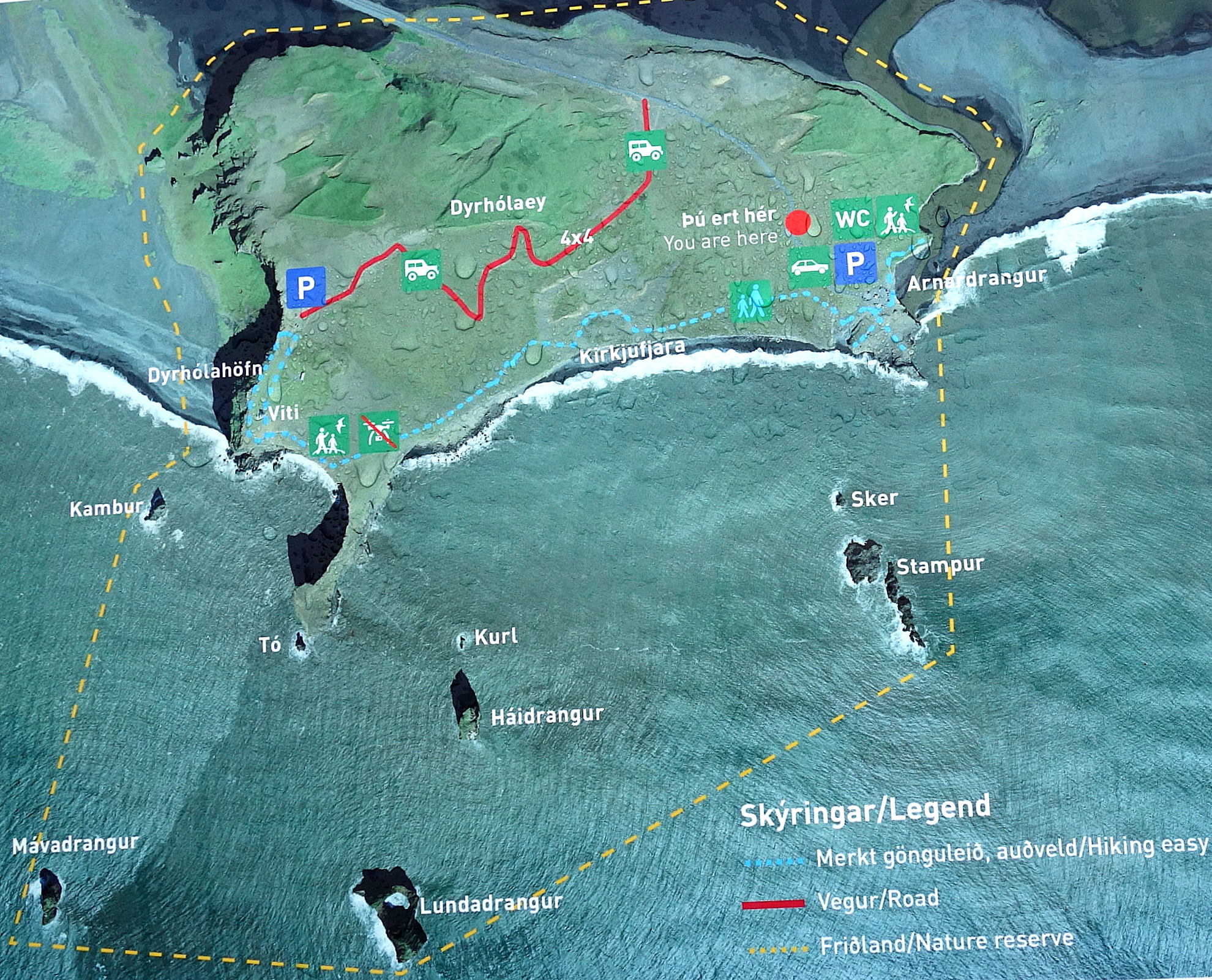 You will notice several sea stacks south of Dyrhólaey, all of which have got a name.

Háidrangur or Tall rock pillar is the tallest of these sea stacks, at 56 meters. These beautiful sea stacks are filled with nesting birds in the summertime.

Now, let’s drive back down the steep hill and visit Lágey, the eastern part of Dyrhólaey.

Lágey – the Low Island of Dyrhólaey 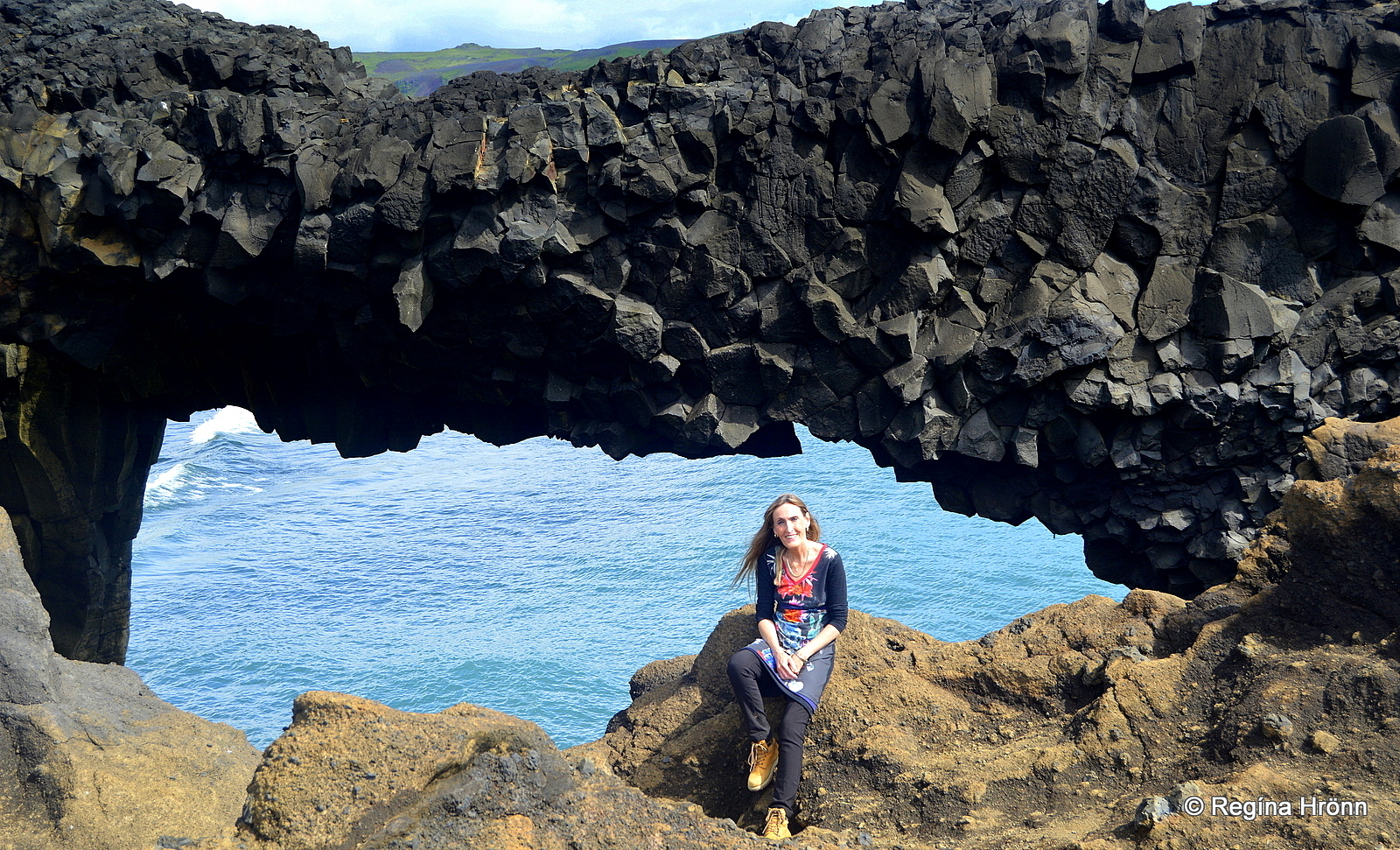 Visiting Lágey – the Low Island is a completely different experience from visiting Háey.

Here you will find a huge basalt column rock arch, Bolabás, a true work of art in my opinion. This part of Dyrhólaey is my favorite part.

Old folklore tells us about the supernatural being Eiðisboli. Eiðisboli often cried out when a storm was approaching. 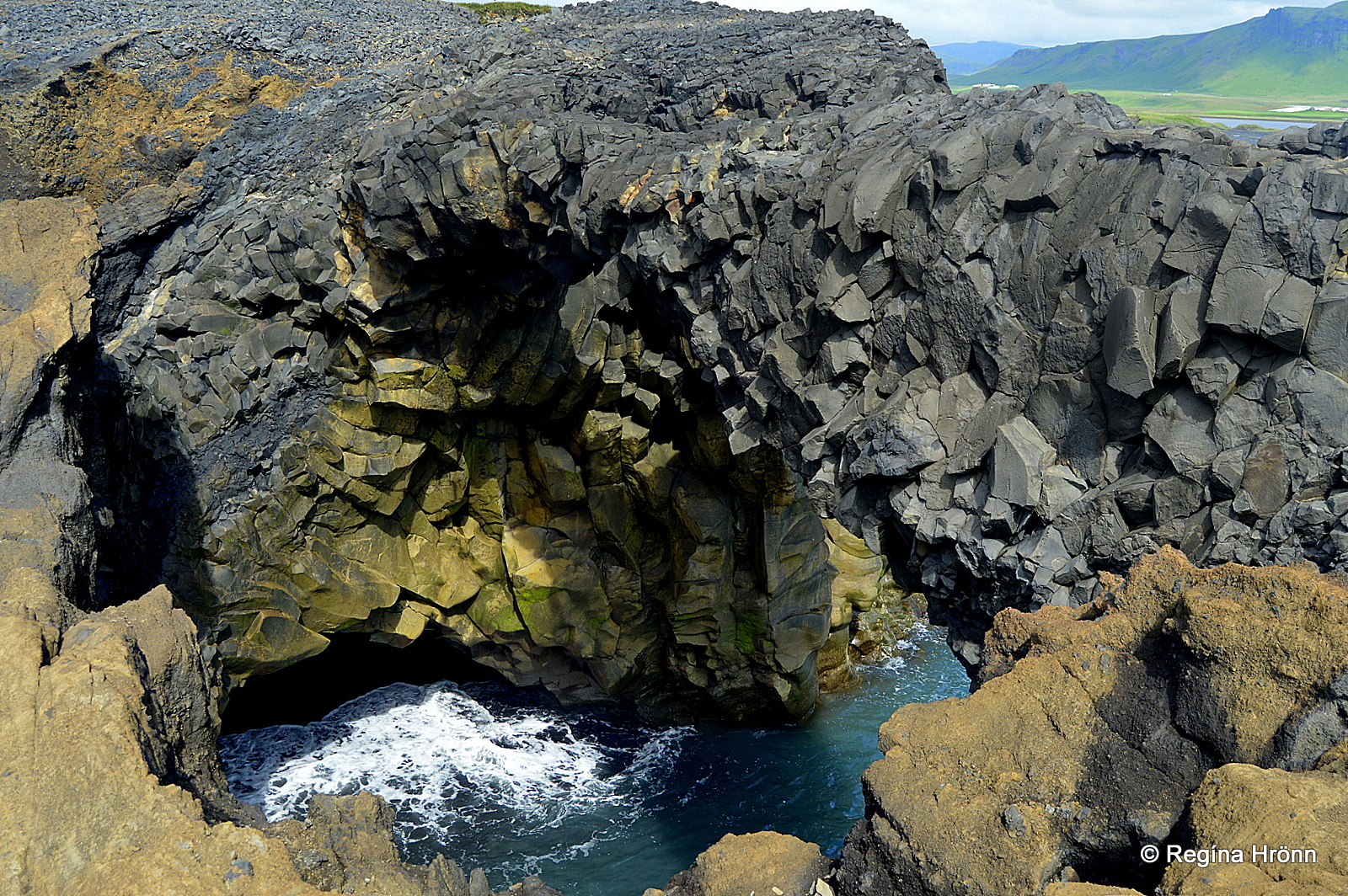 The rock arch is quite spectacular

It is quite peaceful and beautiful here in lovely weather, but I would not want to be here in a storm when the waves come crashing through the hole.

From Lágey you will have a beautiful view of Reynisfjara beach and the Reynisdrangar sea-stacks, which I am going to show you in my next travel-blog. 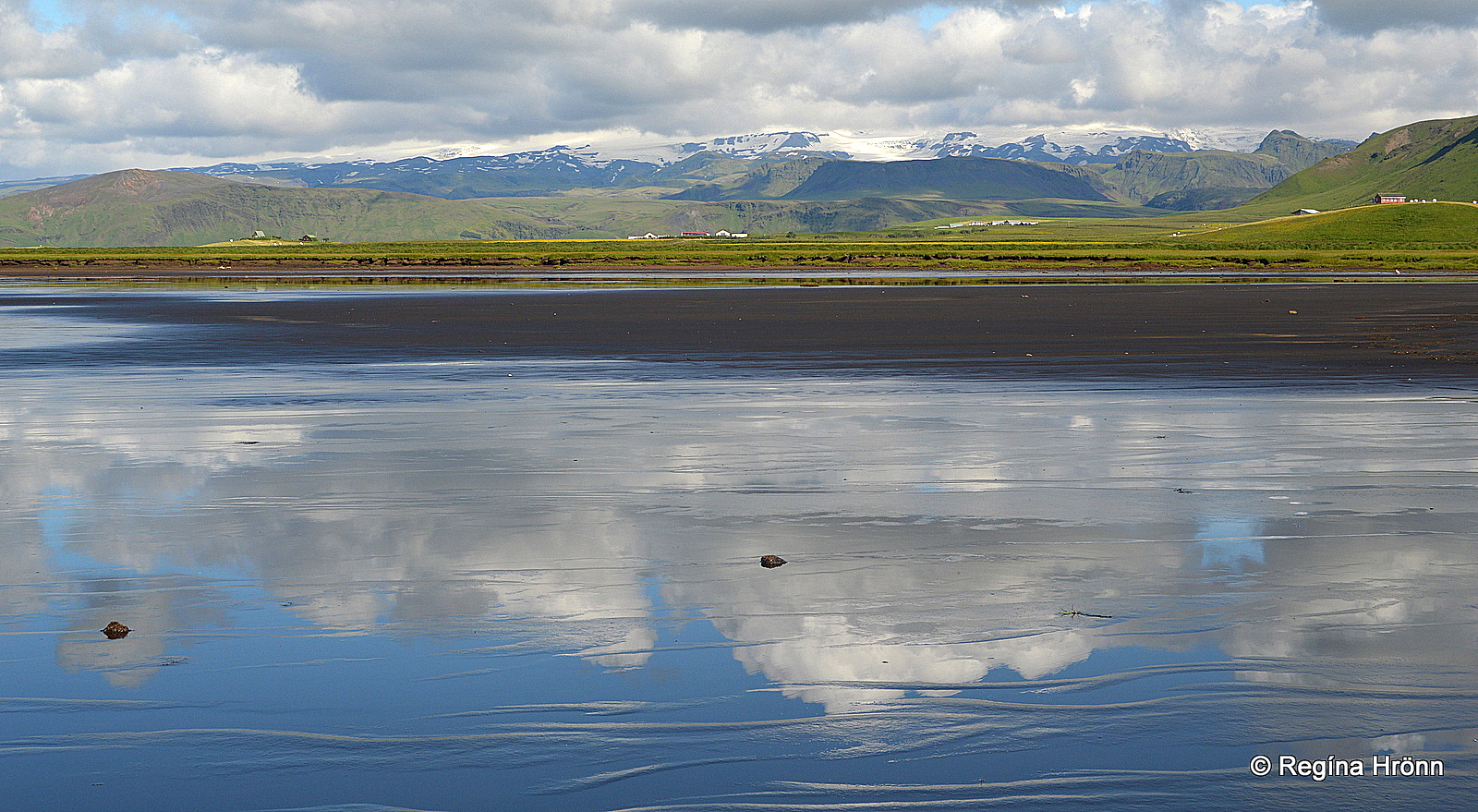 Dyrhólaós between Dyrhólaey and Reynisfjara beach

The beach between Dyrhólaey and Mt. Reynisfjall is called Eiði, named after Eiðisboli. 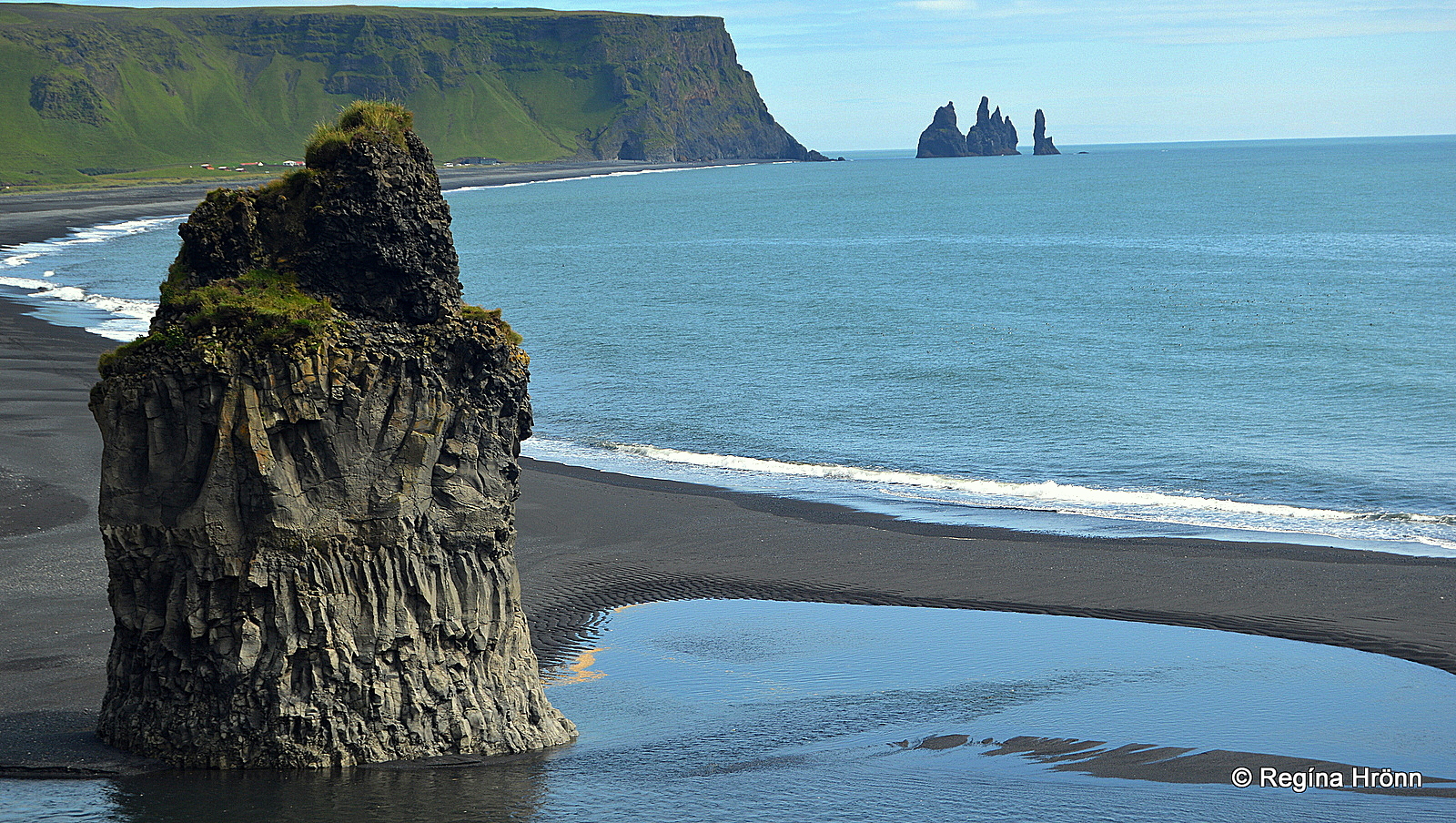 It got its name from the eagles which nested in the pillar of rock, but they are long gone.

Nowadays, you might spot the signature birds of Dyrhólaey in these pillars of rock, both the puffin and the fulmar.

Dyrhólaey is an important nesting site for many birds, including the eider ducks.

You might want to bring binoculars and go bird-watching during your visit. Beware of the Arctic tern though, as this bird will fearlessly attack if you come too close to its nesting area.

Dyrhólaey is closed during the bird nesting season from the 8th of May until the 25th of June. 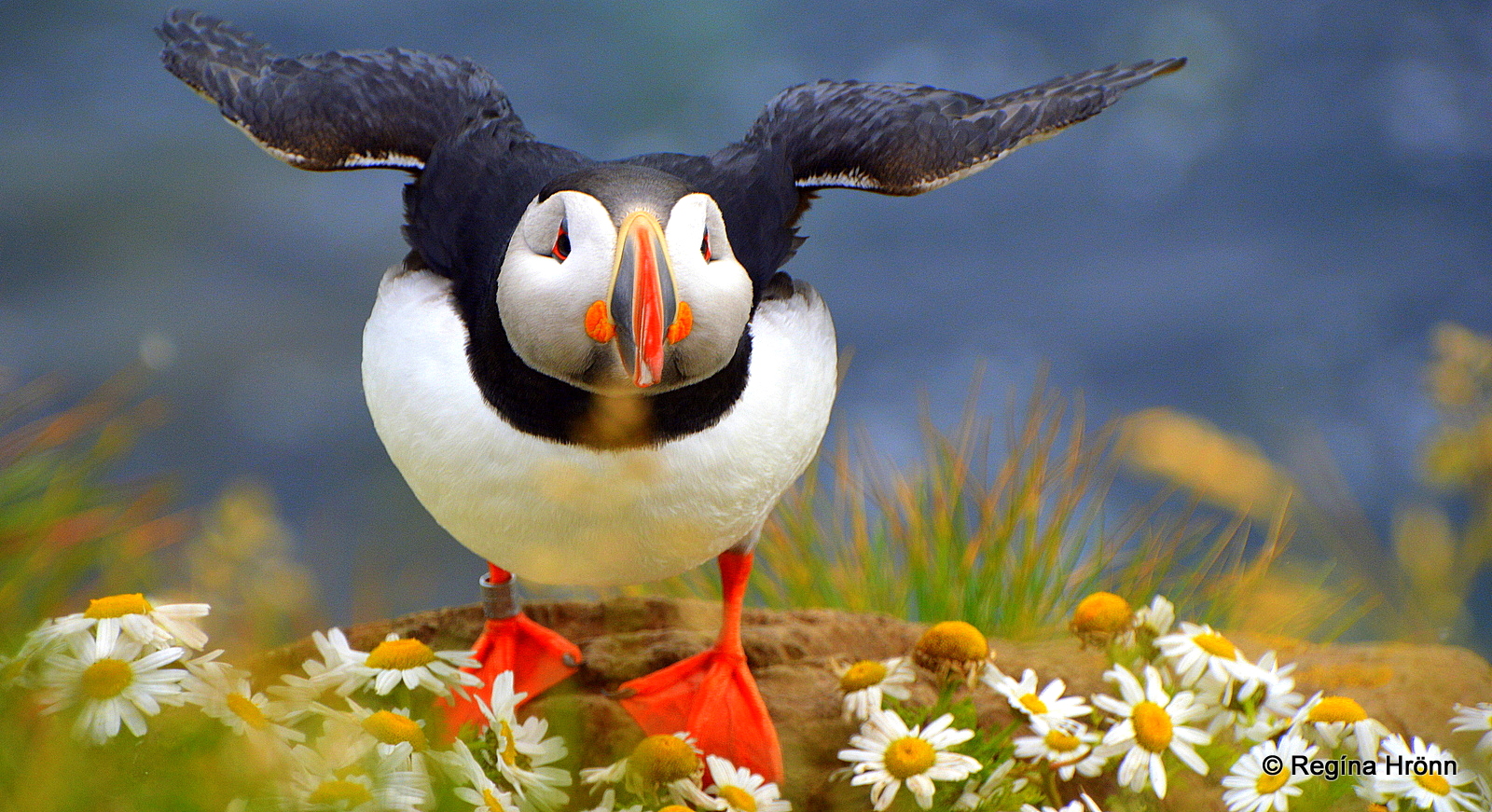 A puffin during the breeding season

This important Katla Geosite has been protected since 1978 due to its varied birdlife.

Kirkjufjara – the Church beach is the name of the black beach between Háey and Lágey.

Kirkjufjara had to be closed off as it was becoming too dangerous visiting it.

Landslides are frequent here and the sneaker waves can carry people out to sea. See also my travel-blog: Extremely dangerous waves by Reynisfjara and Kirkjufjara black beaches in South-Iceland. 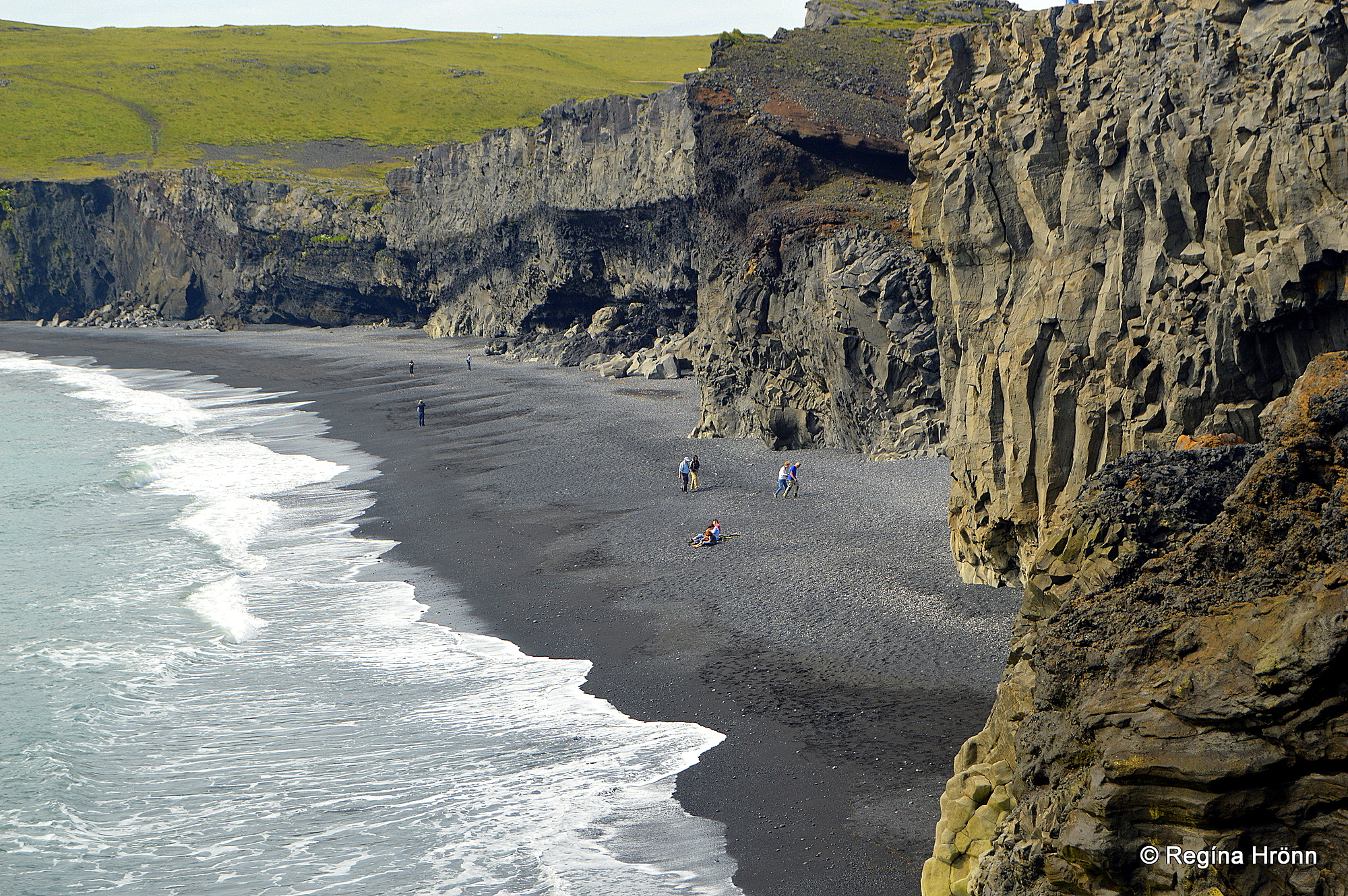 Kirkjufjara beach before it was closed off

A tragic accident happened in 2017 at Kirkjufjara when a German tourist drowned after being pulled out to sea by the sneaker waves.

So let’s be careful and respect the signs and never go down to the beach. We can watch the waves coming crashing in from above in the safety of Lágey.

Dyrhólahverfi is the inhabited area close to Dyrhólaey, where you will find some farmhouses.

If you have read the Saga of Njáll, then the son-in-law of Njáll, Kári Sölmundarson, bought a landholding at Dyrhólar, which was called Dyrhólmar in the Saga.

Kári was the one who was able to escape from the fire at Bergþórshvoll farm and revenge this evil deed, which is one of the best-known events in the Icelandic Sagas. 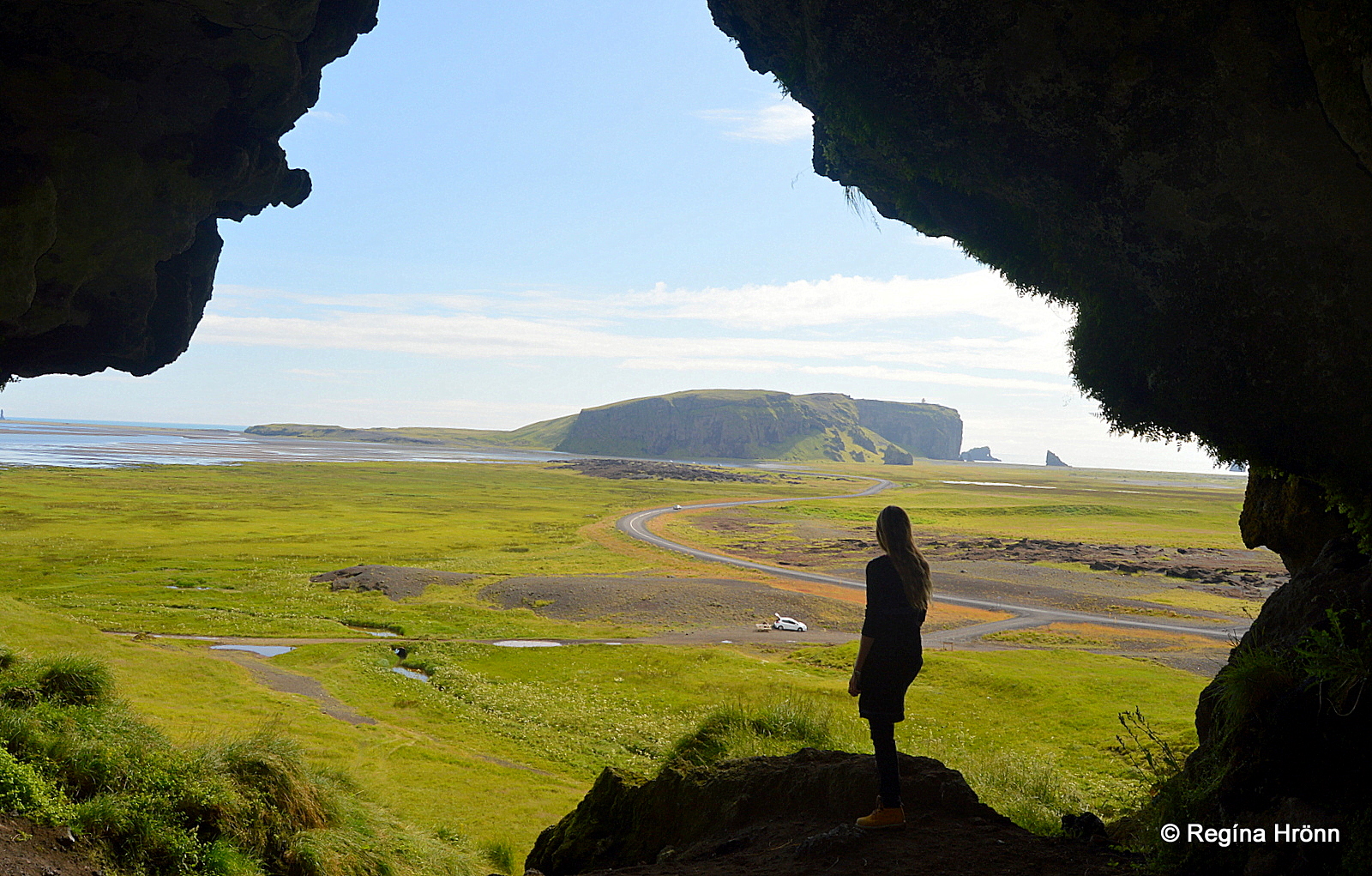 Loftsalahellir cave in Mt. Geitafjall is close to Dyrhólaey. It is a historic cave which you might want to include in your visit to Dyrhólaey.

In this cave, the farmers of Mýrdalur held their district parliament, Dyrhólaþing, until 1901, as the names Þinghóll and Þingbrekka – the Parliament Hill and Parliament slopes indicate.

Old topographical names as Gálgaklettur or the Gallows Rock remind us of the old times when punishments were carried out in the district. 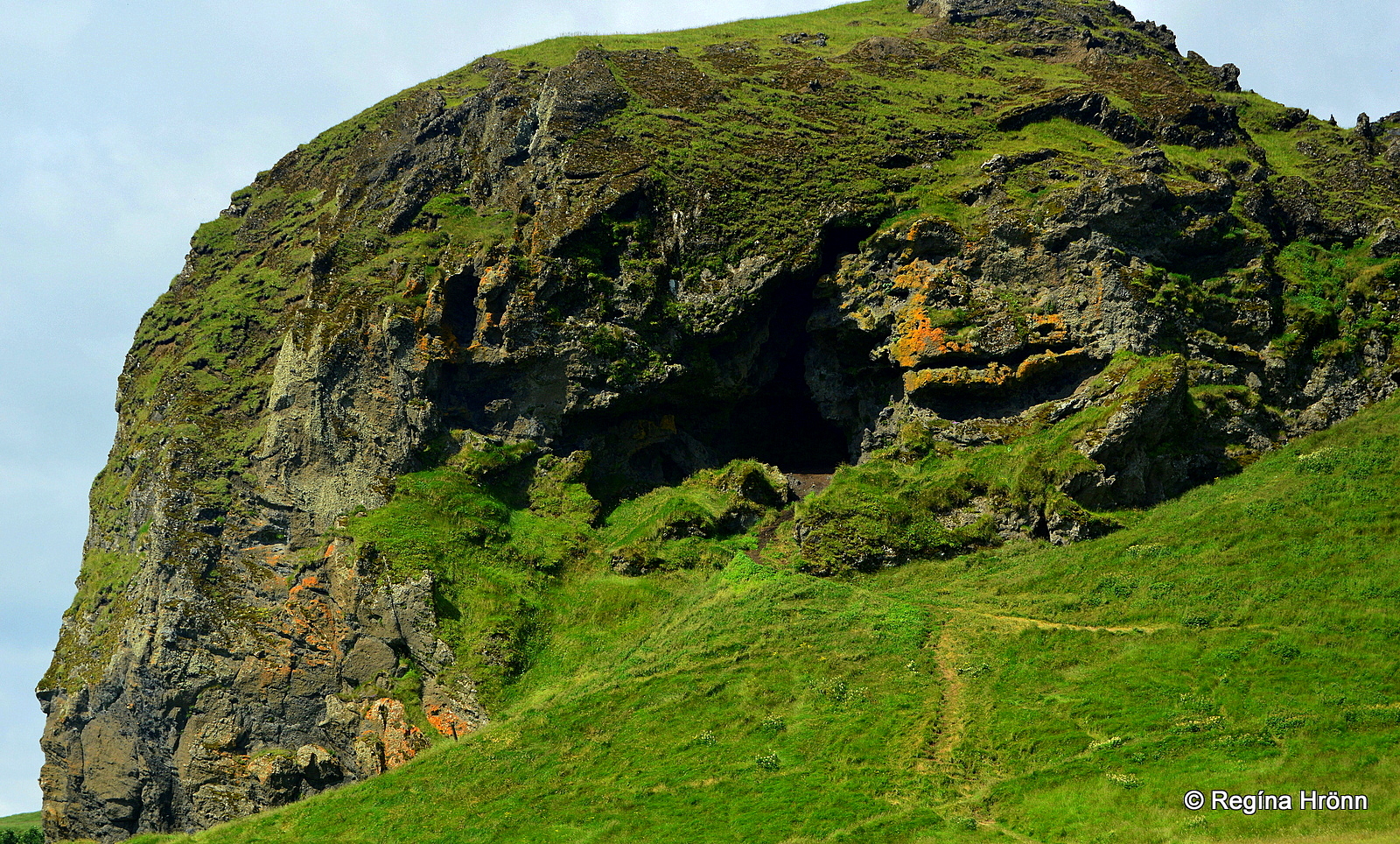 The last death sentence in this district was when Gísli hrókur got his sentence for theft and other evil acts. 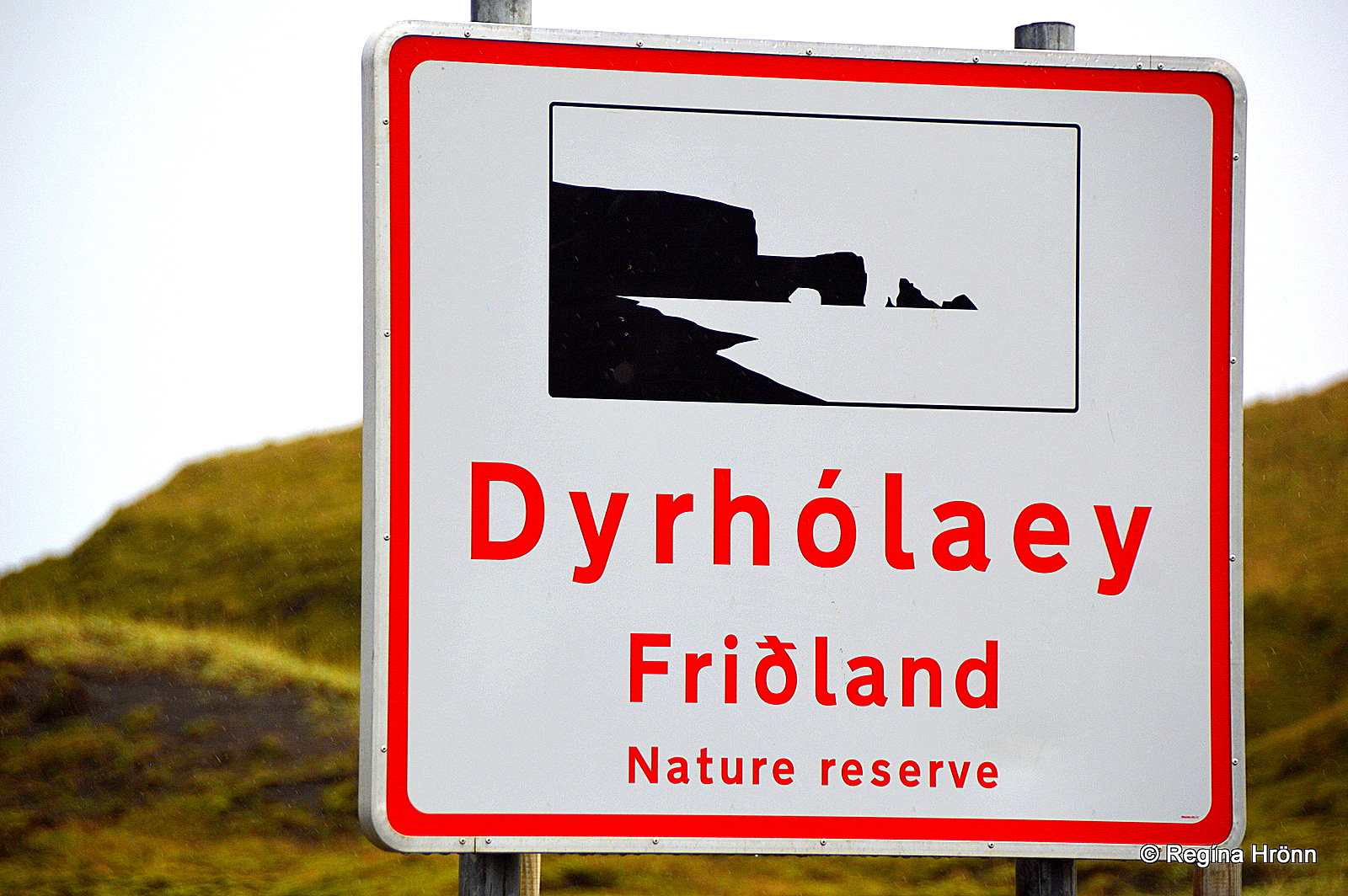 Dyrhólaey is located in South-Iceland some 182 km away from Reykjavík city.

In my next travel-blog we are going to explore the beautiful and dangerous Reynisfjara black sand beach, which is just east of Dyrhólaey.