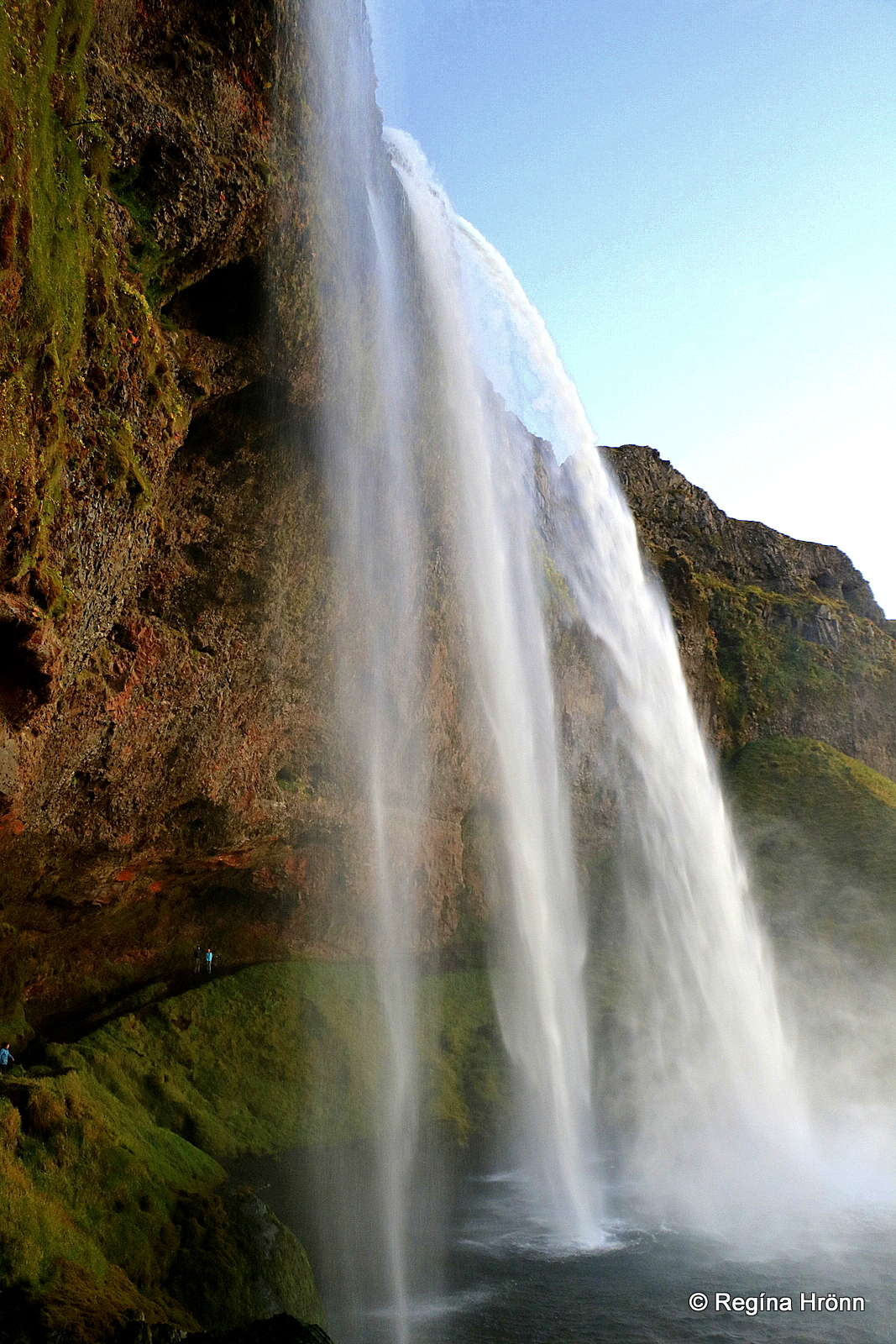 Seljalandsfoss is more than 60 meters tall and cascades majestically from the cliffs of Mt. Eyjafjöll – it is quite an elegant waterfall.

The waterfall is named after the farm Seljaland, which is close by.

Seljalandsfoss is very easily accessible, as it is right by the intersection of ring-road 1 and Þórsmerkurvegur road no 249 in South-Iceland. 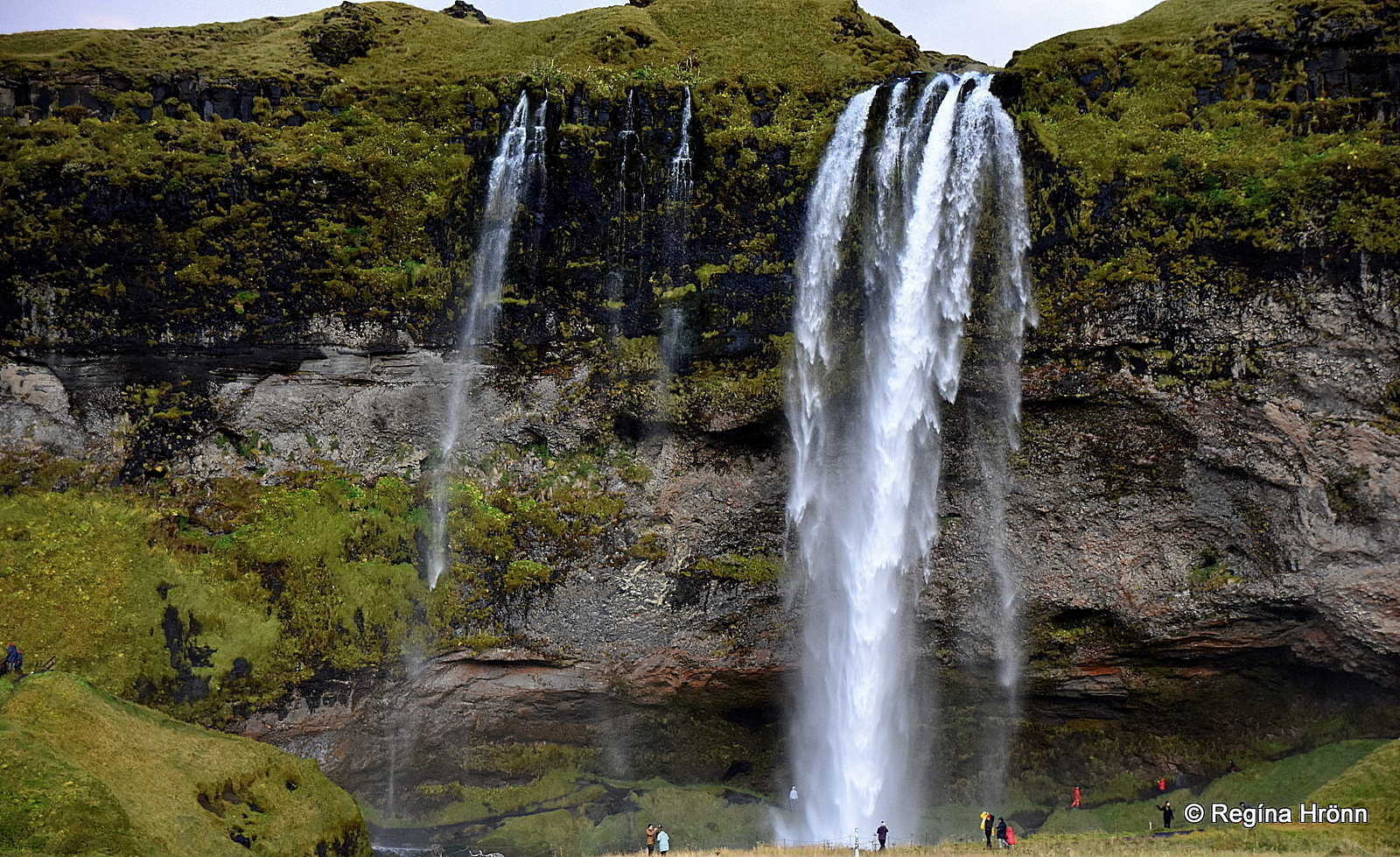 It is relatively easy walking behind the waterfall. It is best to follow the path to the right of the waterfall and exit via the platform and stairs, i.e. do an anti-clockwise circle.

I have seen people start from the other side and, which makes it a bit difficult when you have to meet people on the path behind the waterfall. 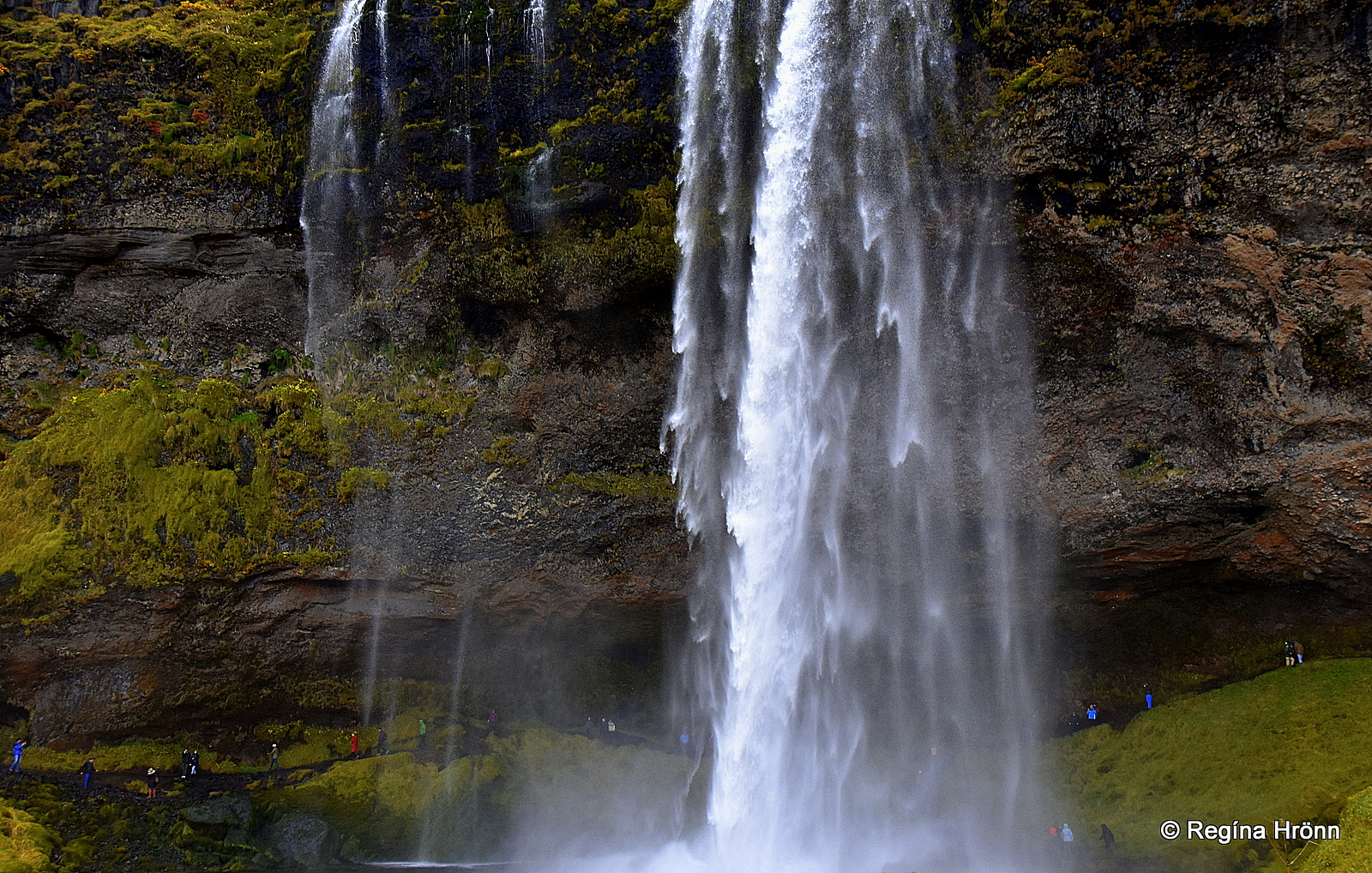 Here you can see quite a few people behind Seljalandsfoss

It is so much fun walking behind Seljalandsfoss and a fantastic experience standing behind the waterfall looking at it from behind.

My favorite is when the weather is sunny and the sun lights up the waterfall. Also when the sun is about to set. 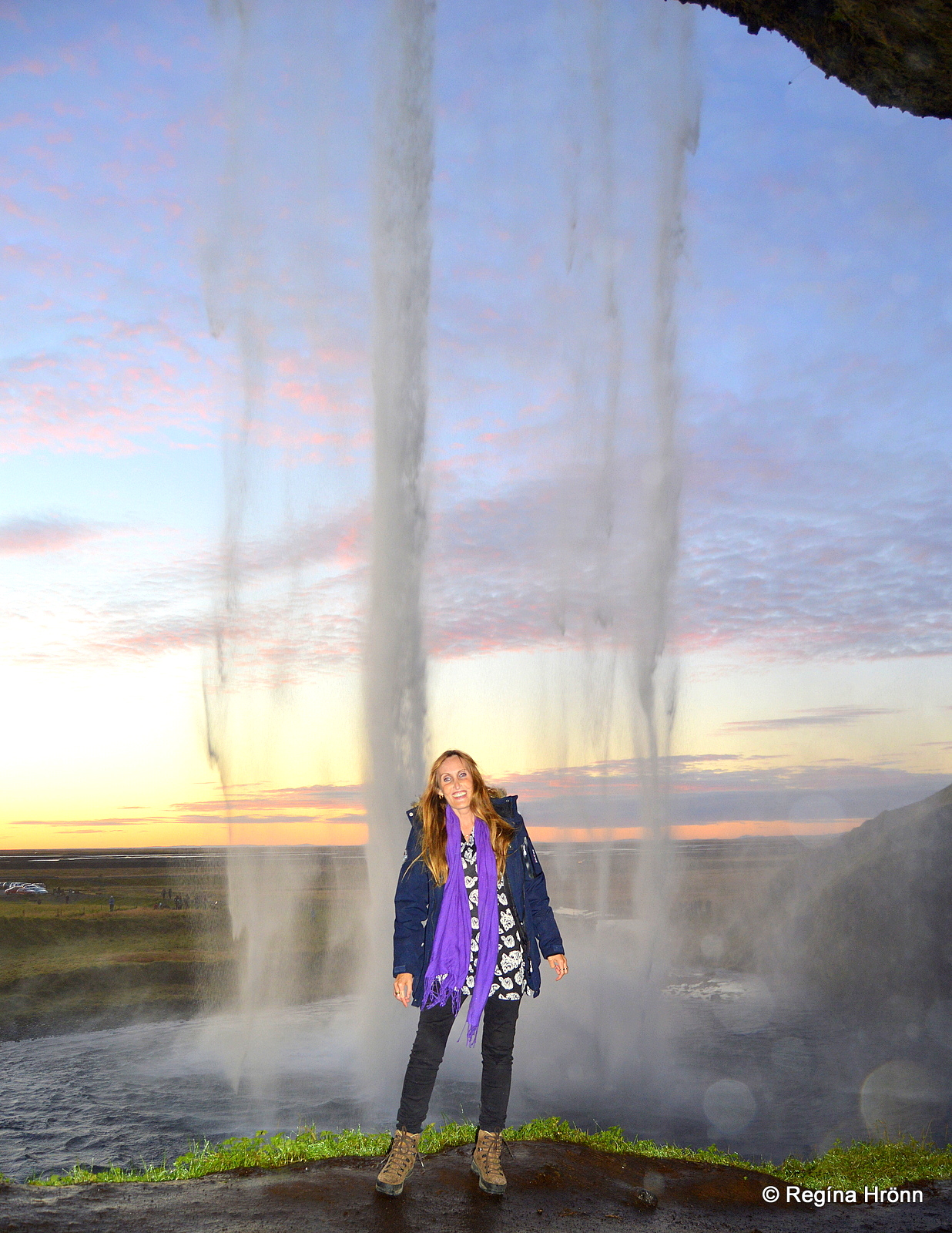 Bring a raincoat as you will get soaked from the mist and drizzles. And protect your camera.

I take my photos on a heavy camera, not on my phone, and flash is needed when you stand behind the waterfall, or else you will look like a silhouette of yourself against the waterfall.

In my photo above we had arrived a little bit too late at Seljalandsfoss and the sun was setting. Beautiful colors of the sky though. 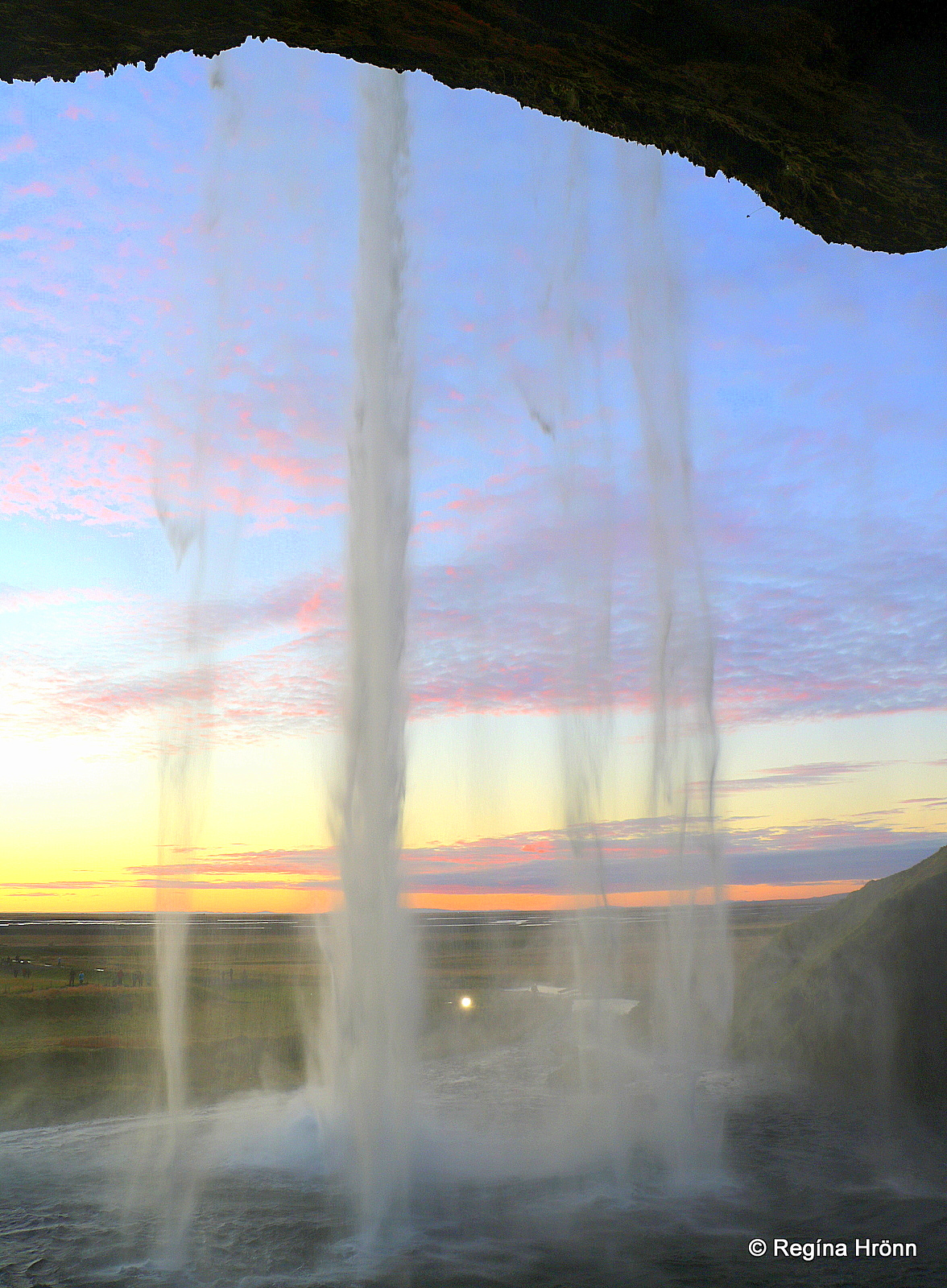 The ascent from the waterfall on the other side is a bit difficult as here one has to climb over some slippery rocks, which can be tricky for some, but then we help each other out, as my husband did in the photo below.

So always wear good sturdy shoes when walking behind Seljalandsfoss. This is nature and this is the trickiest part of the walk behind the waterfall.

I have heard speculations about fixing this part of the “path”. 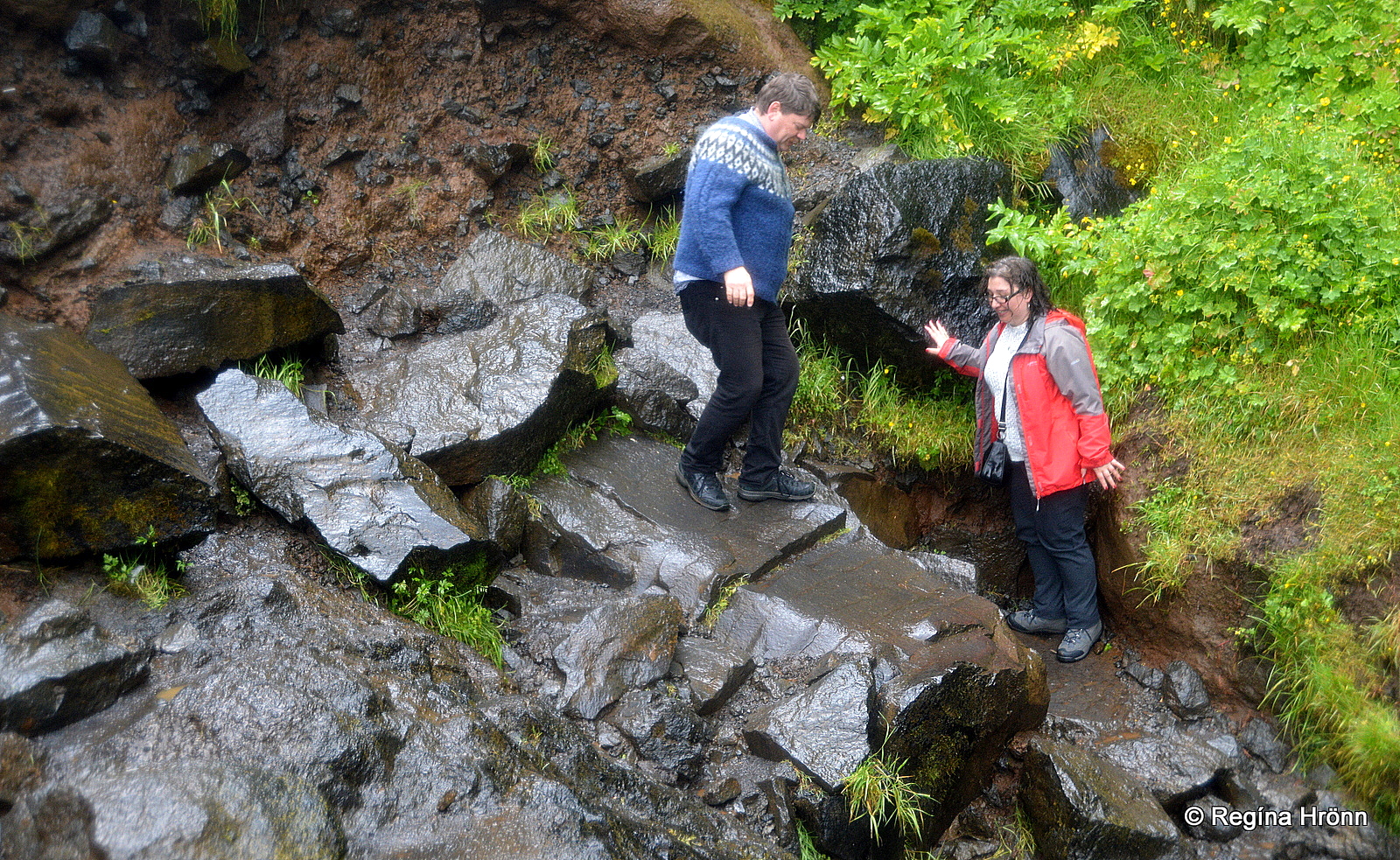 Seeing that Seljalandsfoss is facing west, then it is only possible to see it lit up by the sunlight later in the day or evening.

So when we are traveling on a day tour to the south coast of Iceland and plan to return back to Reykjavík, Iceland’s capital city, on the same day, we always pass Seljalandsfoss waterfall and leave visiting it until on our way back to Reykjavík. 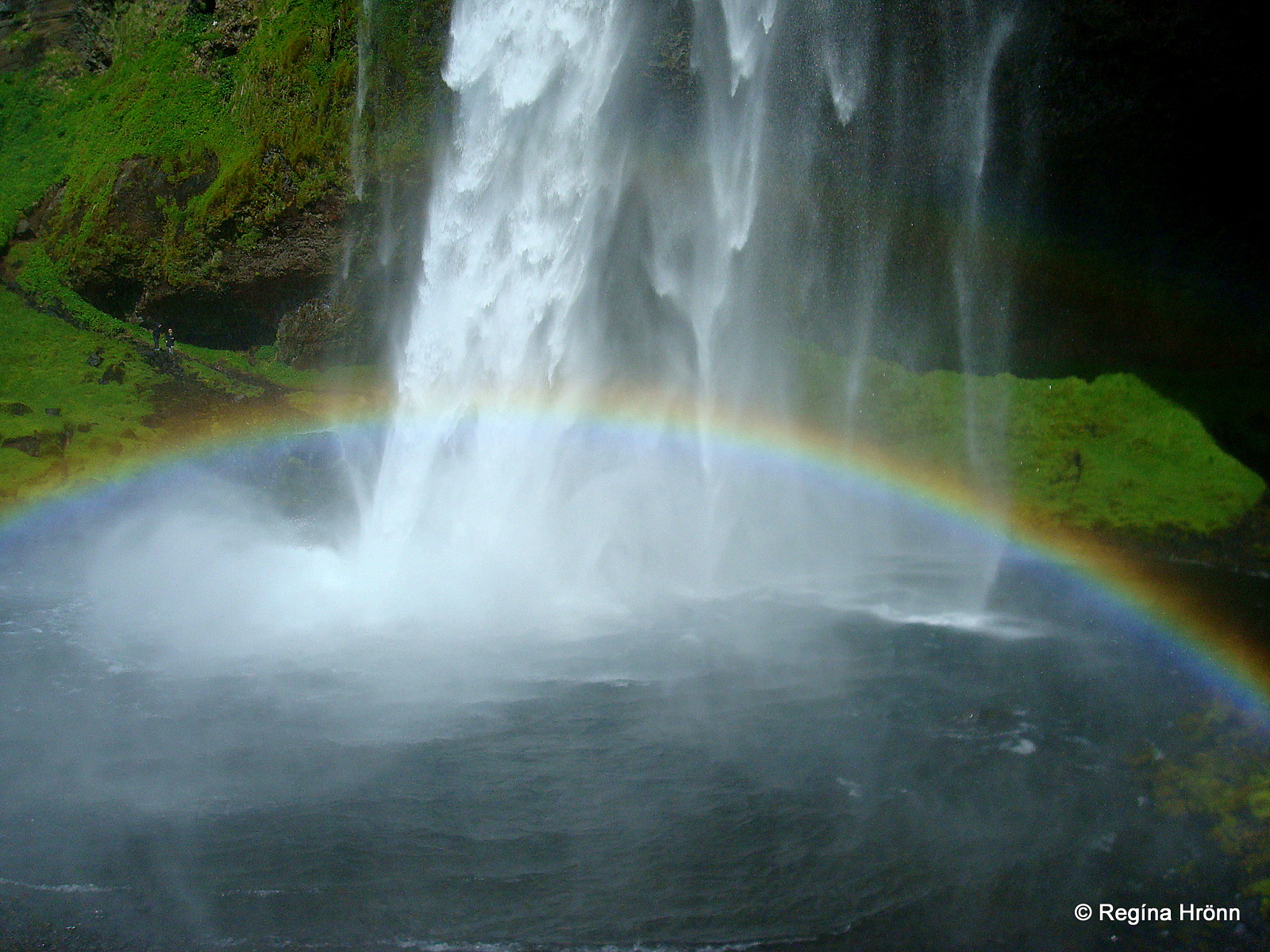 Seljalandsfoss lit up by the sun

And we hope for the sun to shine when we return back and visit Seljalandsfoss, which is not always the case in my country. A rainbow is a plus.

Visiting Seljalandsfoss in the wintertime 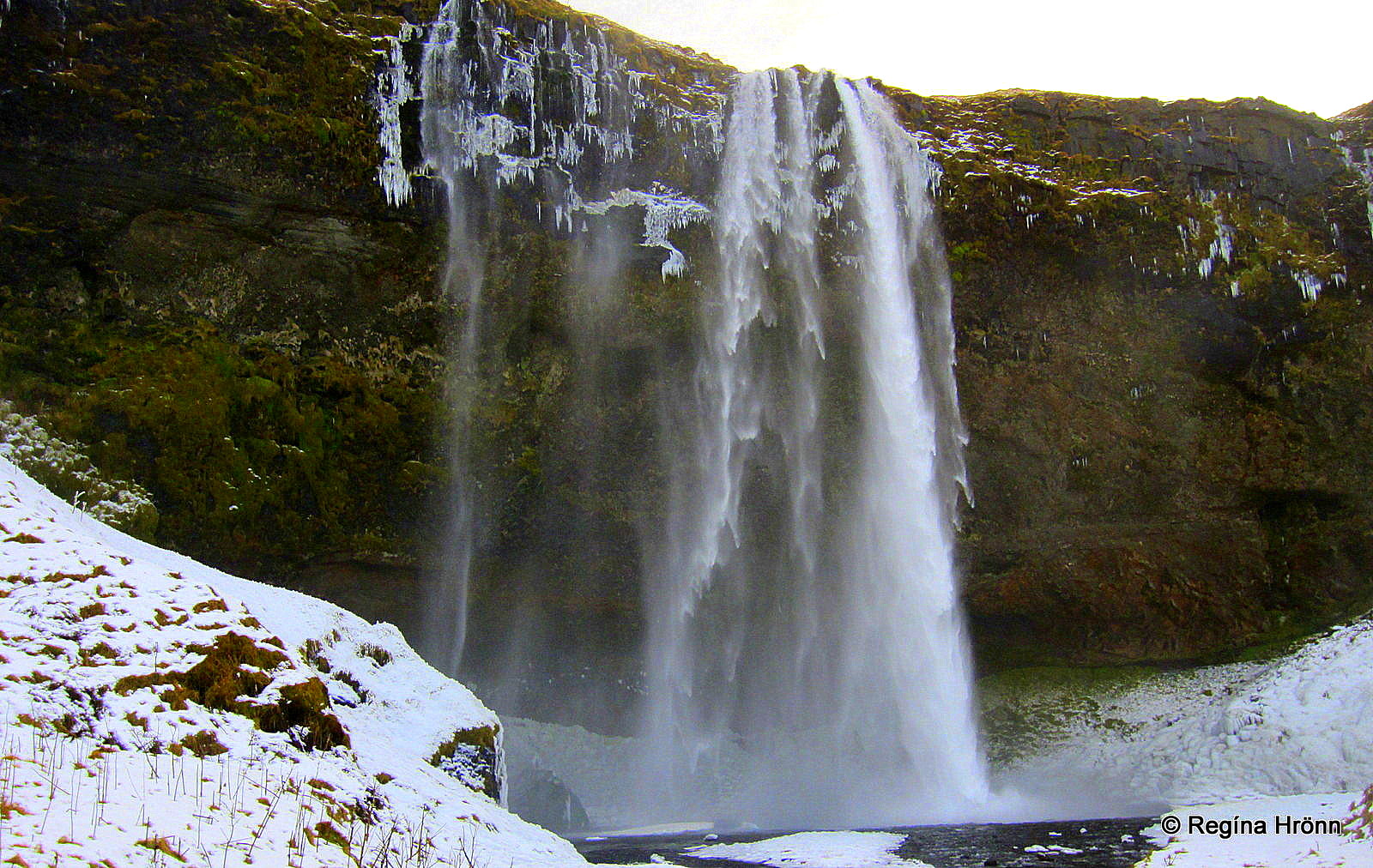 Seljalandsfoss in the wintertime

In the wintertime when it is frost and the path behind the waterfall is icy and slippery, it is closed for our protection.

The mist from the waterfall forms icicles on the cliff and ceiling of the cave behind the waterfall, which can fall down on visitors when the temperature rises again.

The path is also closed in heavy rain. In September 2017 after heavy rainfall 100 kg boulders fell from the rock onto the path.

So let’s be extra careful here and never ignore a closed-off sign. 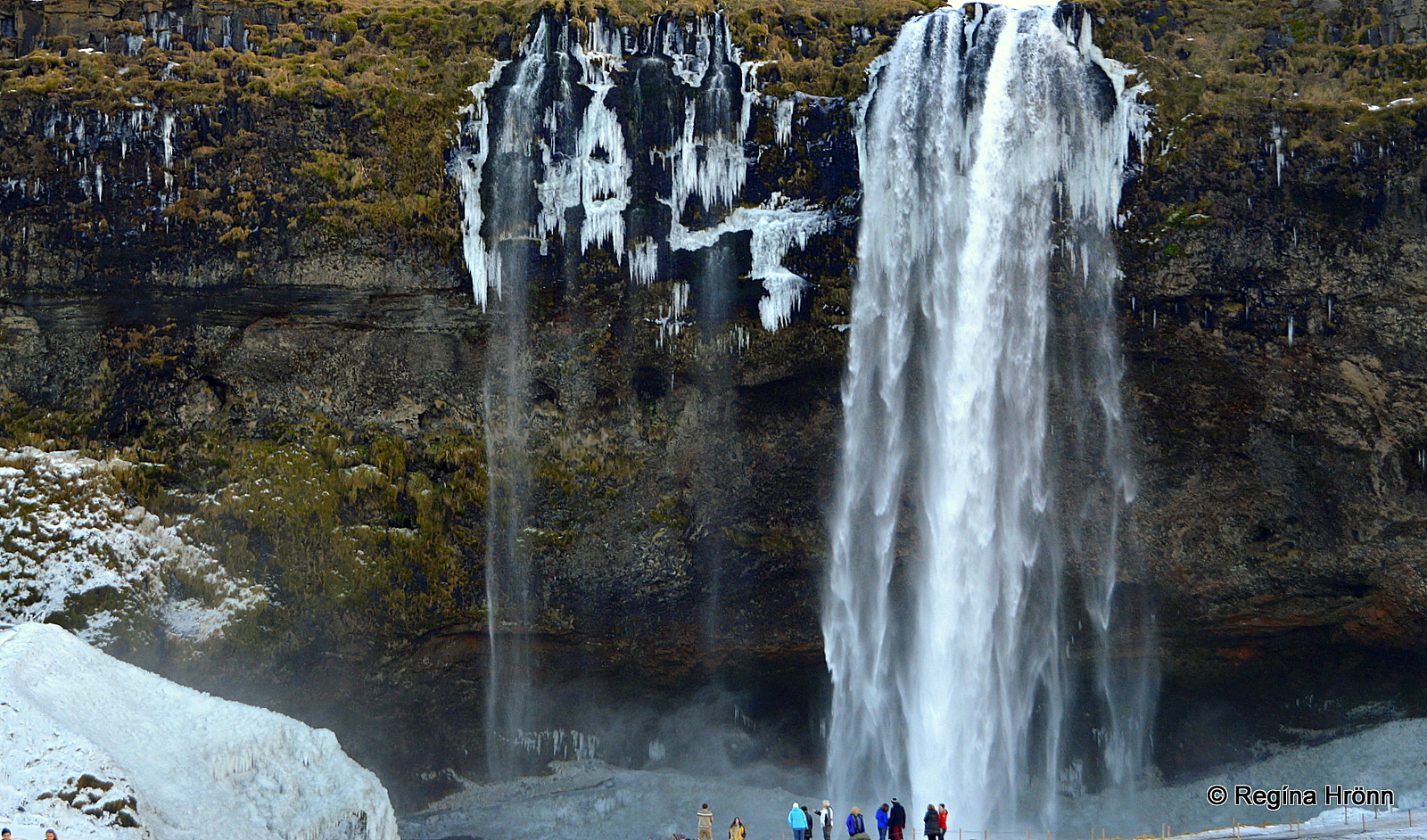 Seljalandsfoss in the snow – path closed

One winter when the path was closed, several people from a group disobeyed their tour guide and walked behind the waterfall even though the path was slippery and icicles were visible above the cave behind it.

A rumble was heard and a huge icicle fell right in front of one woman from the group and she barely escaped alive. It was such a close call, as ice splashed on her and she got covered in ice! 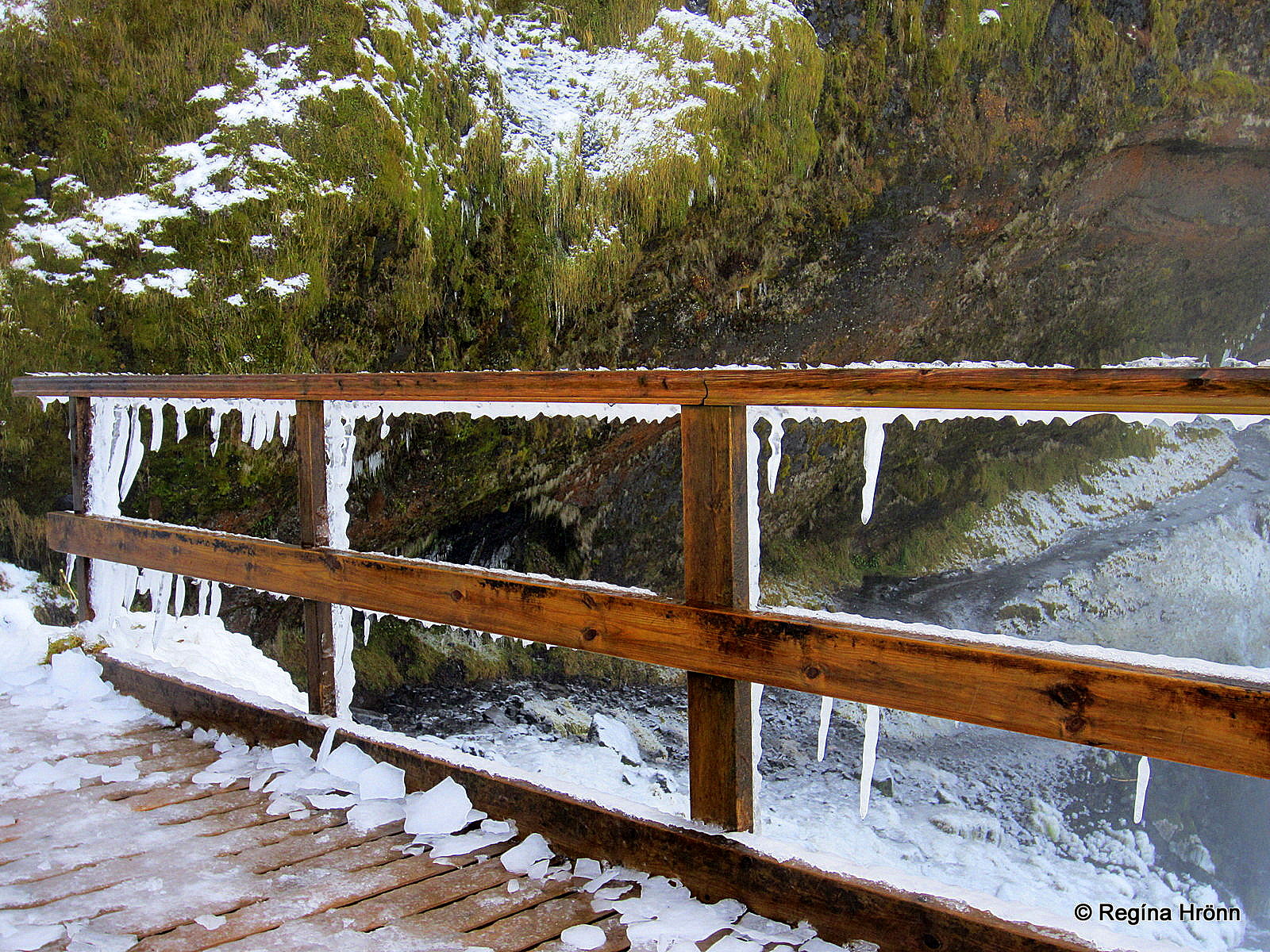 Ice and icicles on the observation platform

The guide in question is a good friend of mine and she told me about this incident, which was also on the news (in Icelandic).

This happened back in 2016 and the following year an alert was issued about the same danger of falling icicles.

So let’s remember that it is for our safety that the path is closed.

The only video I have taken of Seljalandsfoss was this winter video back in November 2013.

The quality of it is not good but gives a general idea of what Seljalandsfoss looks like in the wintertime with icicles forming. 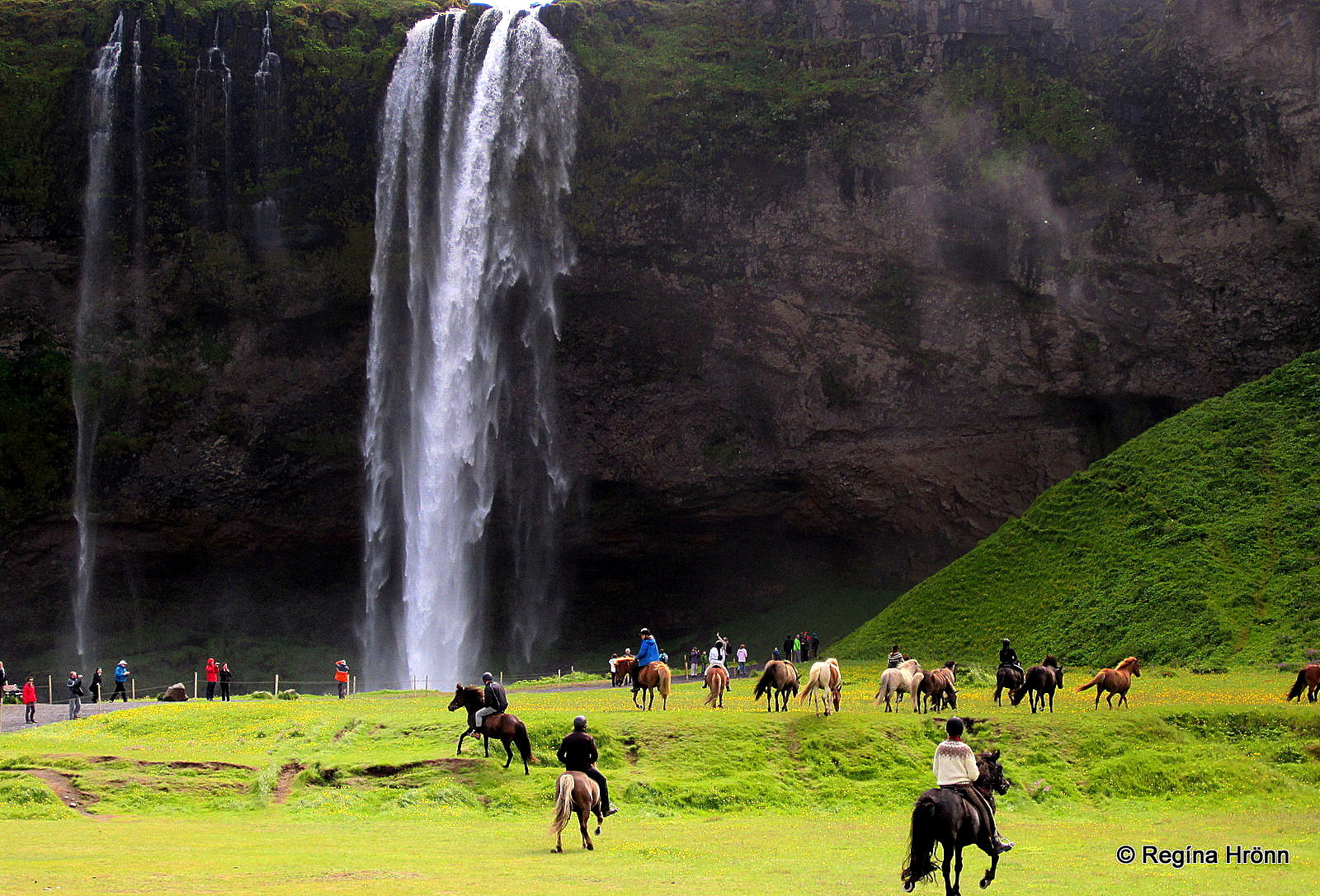 The waterfall looks like a white stripe in the cliff from a distance.

Now, let’s visit another waterfall very close to Seljalandsfoss. It is called Gljúfrabúi, a mystical waterfall hidden away in a gorge.

Glúfrabúi waterfall – the Dweller in the Gorge 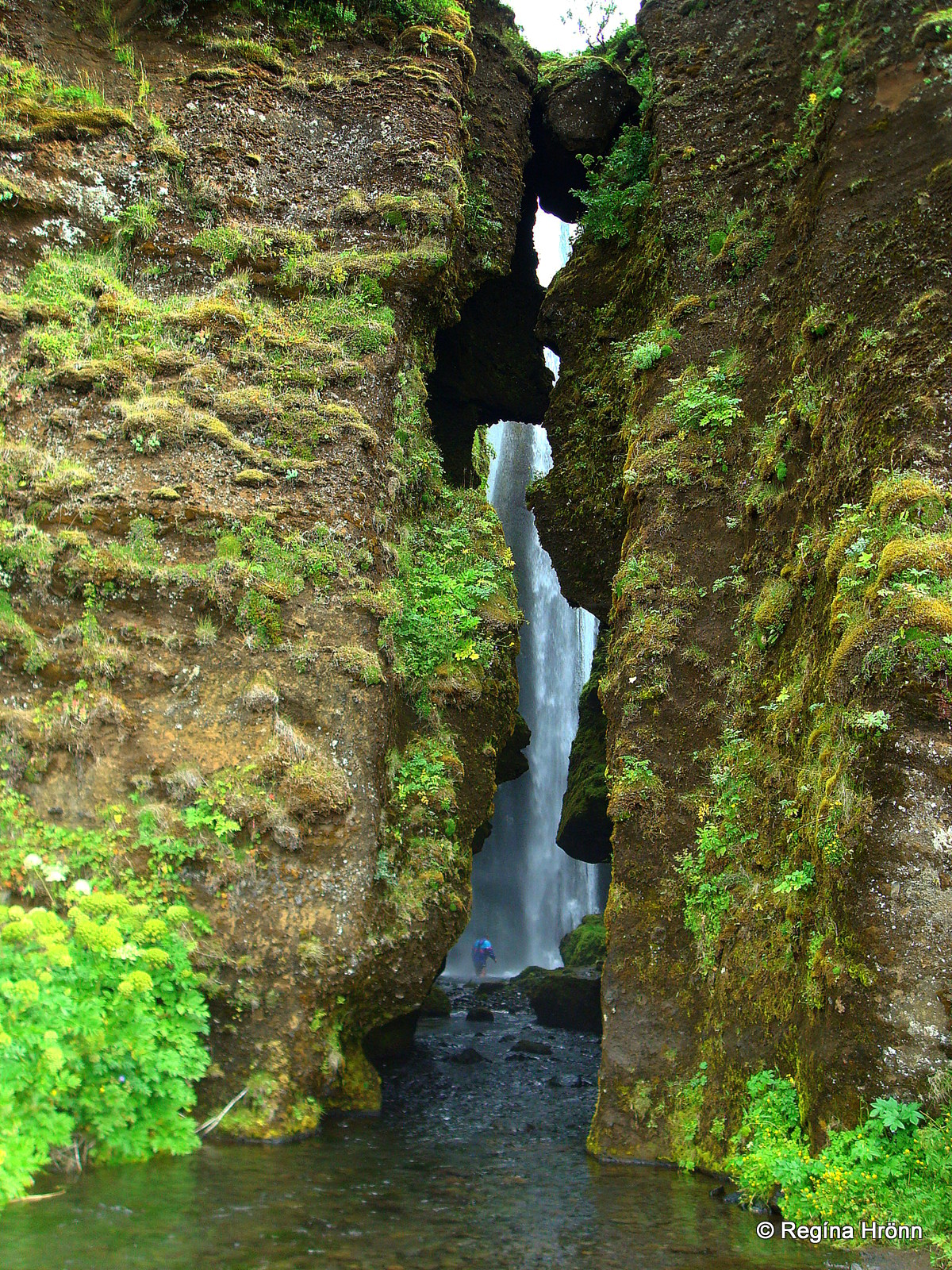 Following the river into the gorge to visit Gljúfrabúi

The neighbor of Seljalandsfoss is called Gljúfrabúi – the Dweller in the Gorge.

Gljúfrabúi, which is approximately 40 meters tall, is also called Gljúfrafoss or Gljúfurárfoss, but most people refer to it as Gljúfrabúi and that is how it is marked on the map of the National Land Survey of Iceland.

These two waterfalls are only a few minutes apart from each other, and you can walk to Gljúfrabúi at Hamragarðar from Seljalandsfoss.

Gljúfrabúi is quite different from Seljalandsfoss as it is half-hidden behind a rock, so you can only see the upper part of the waterfall. Here the river has created a hole or a chute in the tuff. 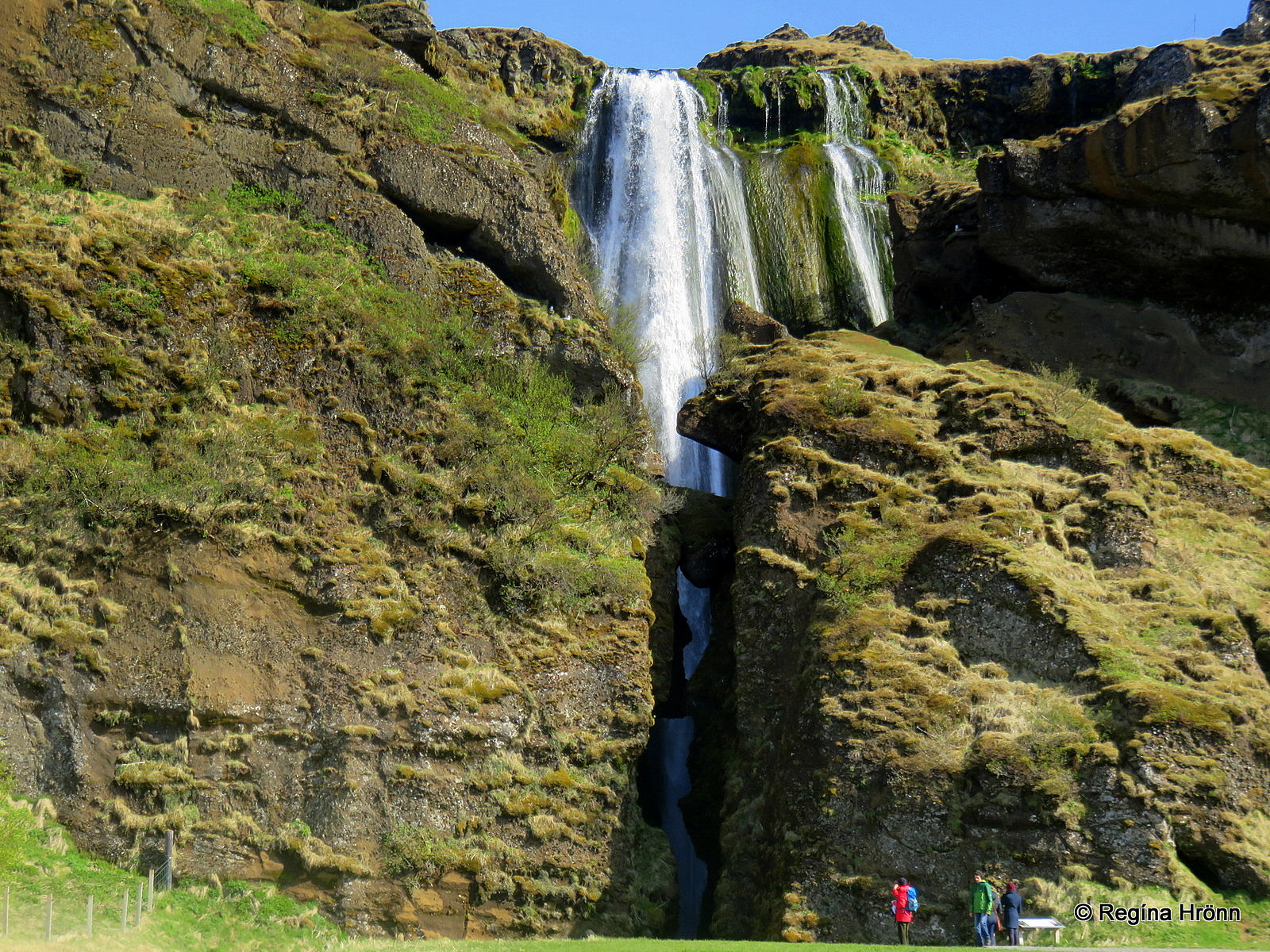 The rock in front of Gljúfrabúi is called Franskanef cliff which translates into the French nose, but we, unfortunately, don’t know the origin of this name.

To see the whole waterfall you will have to enter a rift in the cliff and step on the stones in the spring-fed river Gljúfursá, also called Hamragarðaá.

I find it best to wear Wellington boots when I visit Gljúfrabúi and just wade the river. Also, bring a raincoat as there is a lot of drizzle and mist from Gljúfrabúi.

In the wintertime, when the rocks are slippery and there are icicles in the gorge, it is best not to enter it. 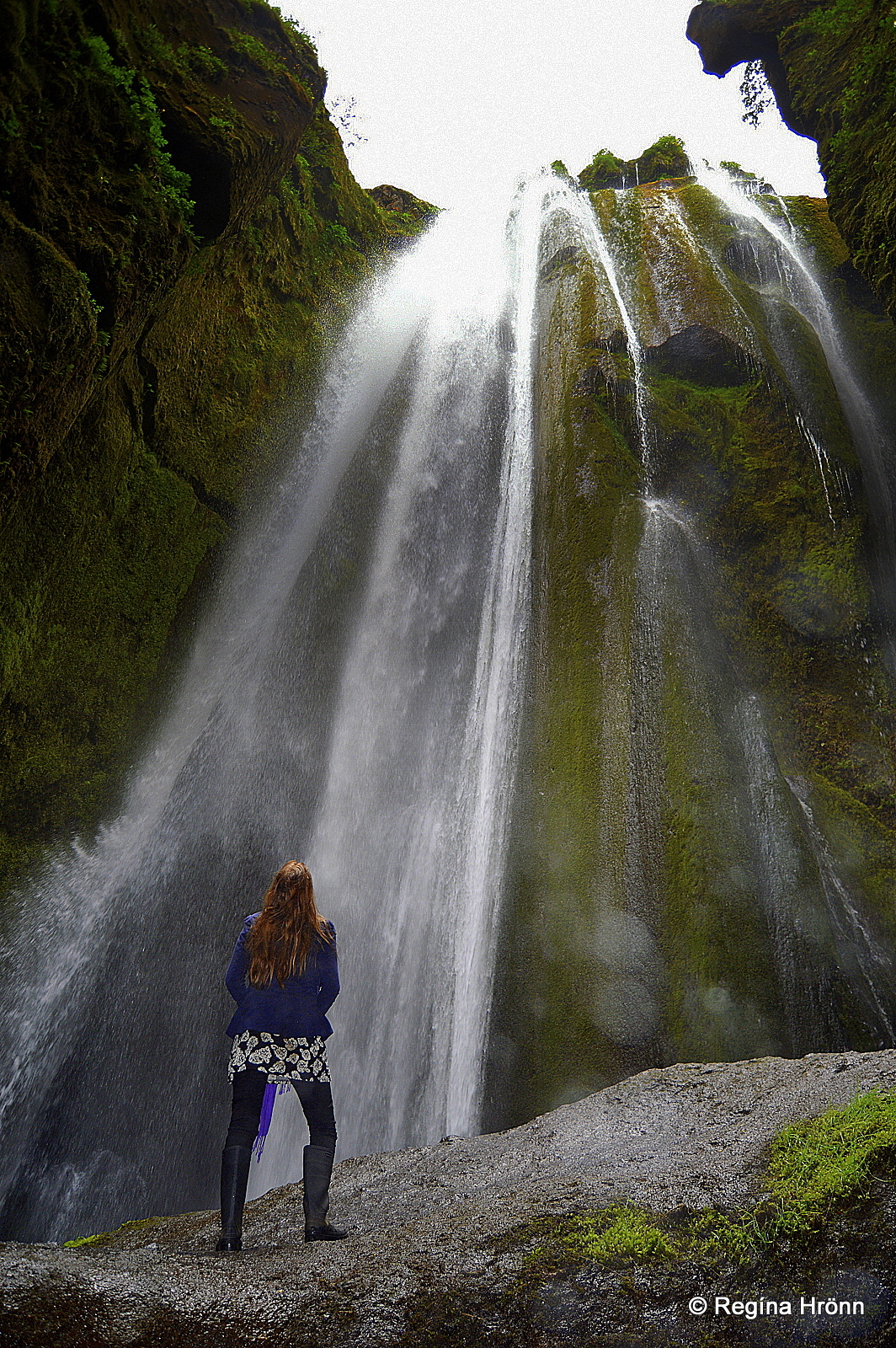 Standing on the rock by the waterfall inside the gorge

It is quite mystical entering the gorge, especially if you happen to be there alone. Gljúfrabúi used to be one of the hidden secrets of Iceland, only known by us locals, but the word spread and now you are rarely here alone, can happen though.

The most popular photo by Gljúfrabúi is from the rock in front of the waterfall. I.e. you will have to climb up on the rock and have your picture taken from below.

This can be a bit tricky due to the light coming in from above and the drizzle and mist as you can see from my photo above. Protect your camera inside the gorge.

There are several other beautiful waterfalls close by like Gluggafoss and the waterfall in Nauthúsagil canyon.

The best-known waterfall is 30 km east of Seljalandsfoss, the majestic Skógafoss waterfall. You’ll be able to see them up close on the Seven Wonders of the South private tour.

Have a lovely time visiting the beautiful waterfalls of South Iceland 🙂