One of the most elegant waterfalls in Iceland is Svartifoss - the Black waterfall - the Pearl of Skaftafell. 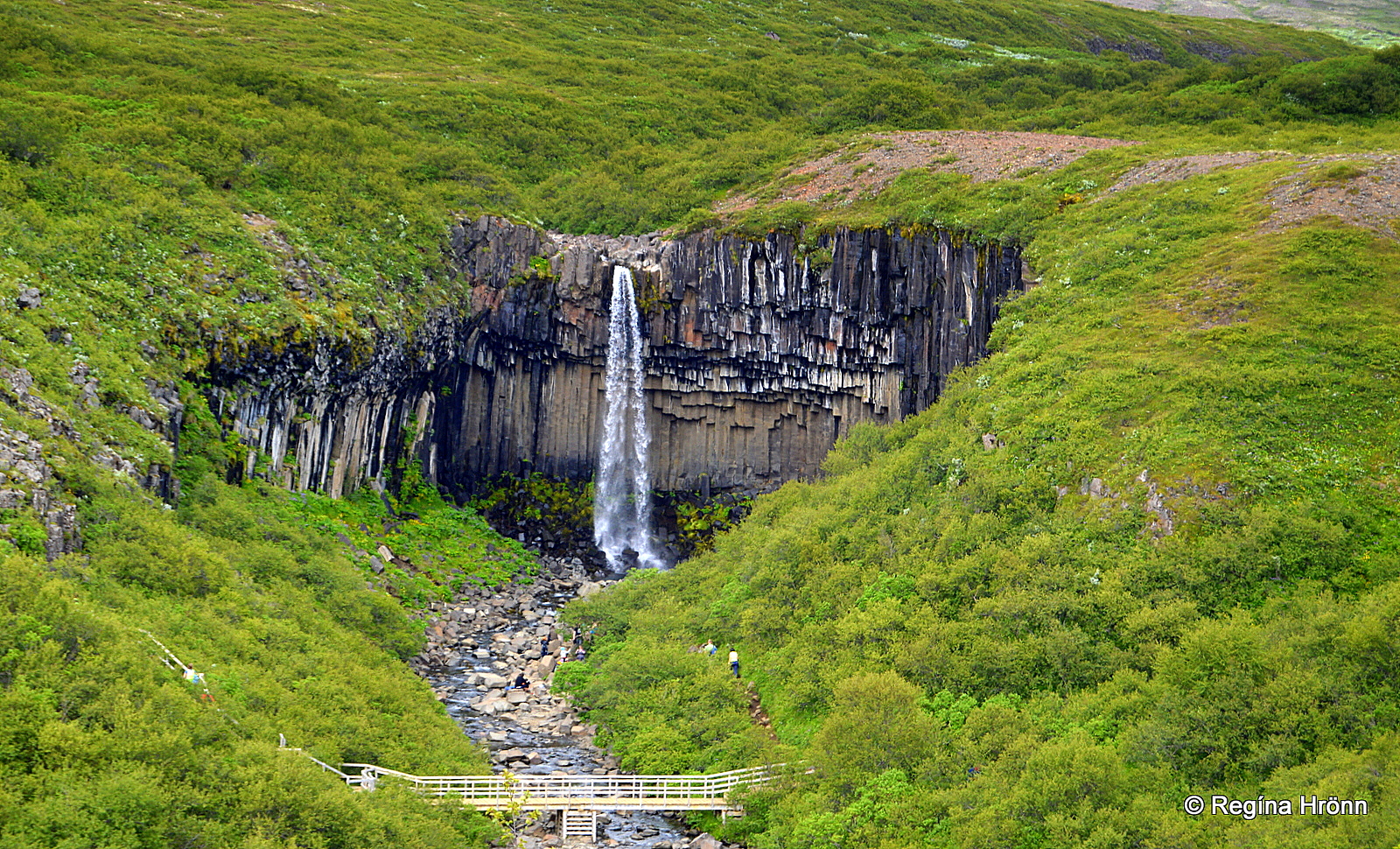 Vatnajökull National Park reaches all the way to Jökulsárgljúfur canyon in North-Iceland which I have shown you in other travel-blogs.

Here in the southernmost part of the national park, you will find many pearls of nature and great contrasts in scenery.

After driving through the vast black Skeiðarársandur glacial outwash plains, the green and lush Skaftafell appears nestled between massive white glacier tongues on both sides. 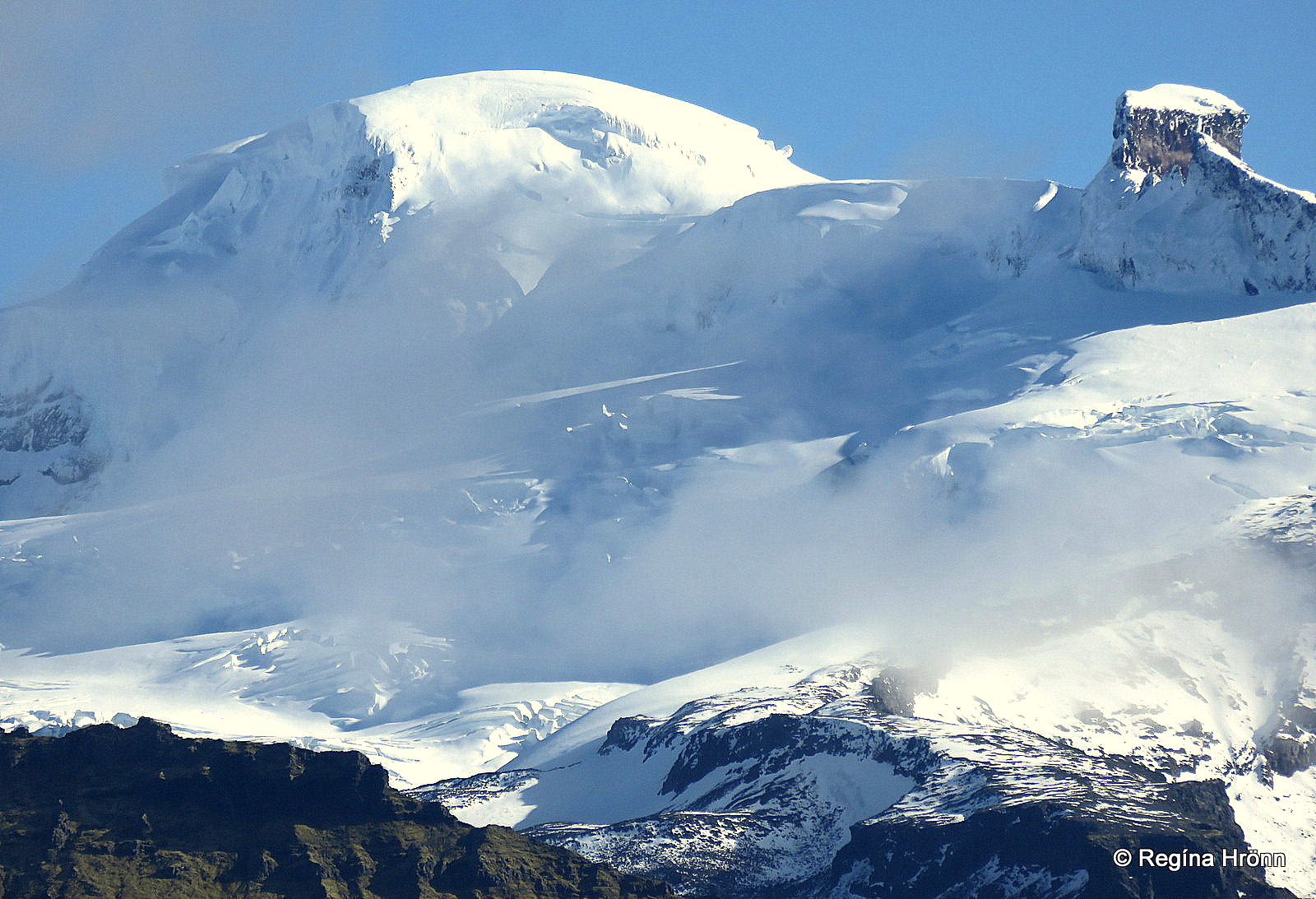 Prominent in this area is also the massive glacial icefall Öræfajökull.

It is Iceland’s tallest mountain at 2,110 meters (6,922 ft) – the highest summit of which is called Hvannadalshnúkur.

Beneath the ice cap, a stratovolcano is lurking. Öræfajökull volcano erupted in 1362 and 1727 and left a trail of destruction in its wake. 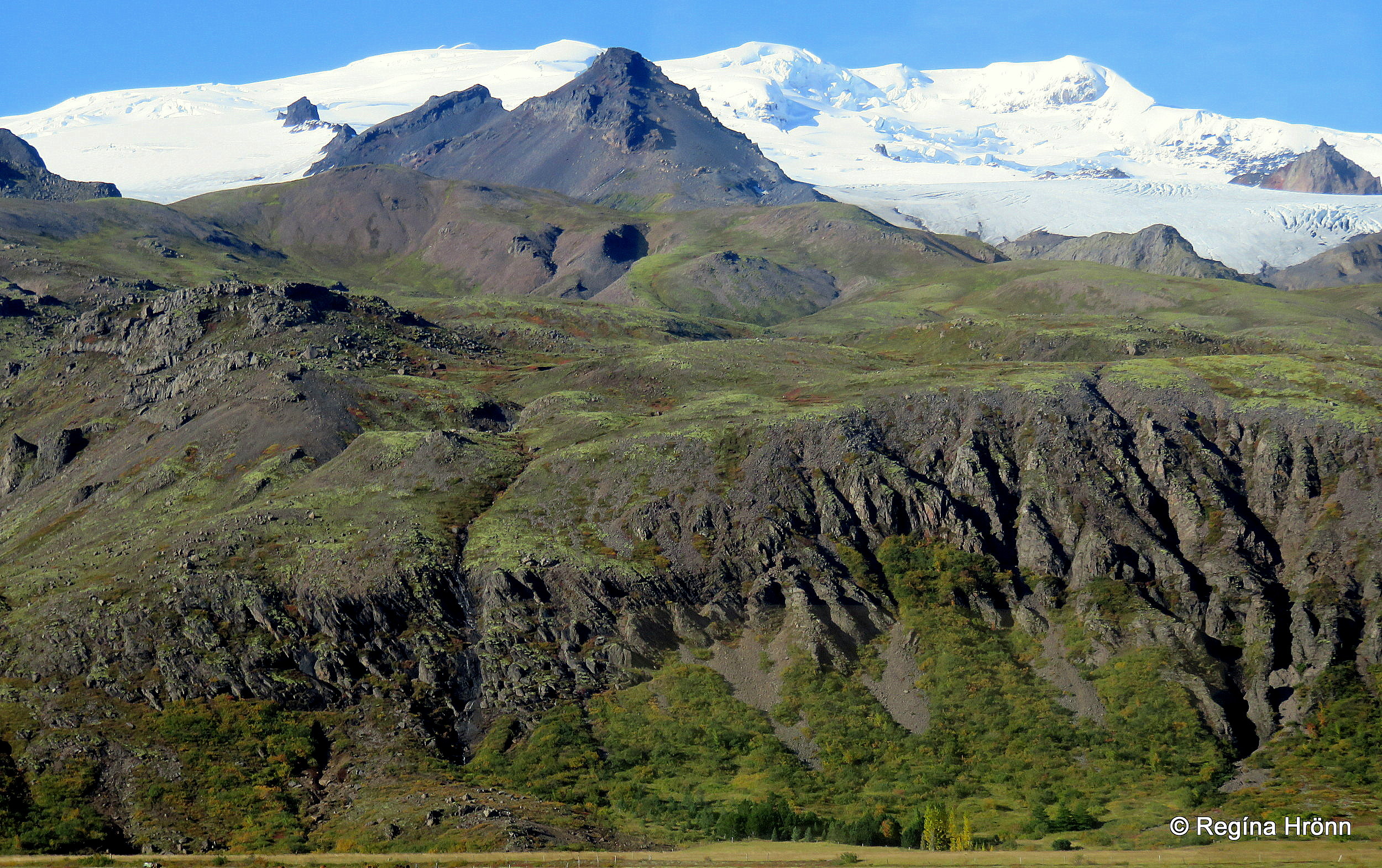 This subglacial volcano is Iceland’s biggest active volcano and reputedly Europe’s second-biggest of its type right after Mt. Etna on Sicily.

Nature in this part of Iceland is truly amazing, with vast black sands, white glaciers, and jagged mountain tops. 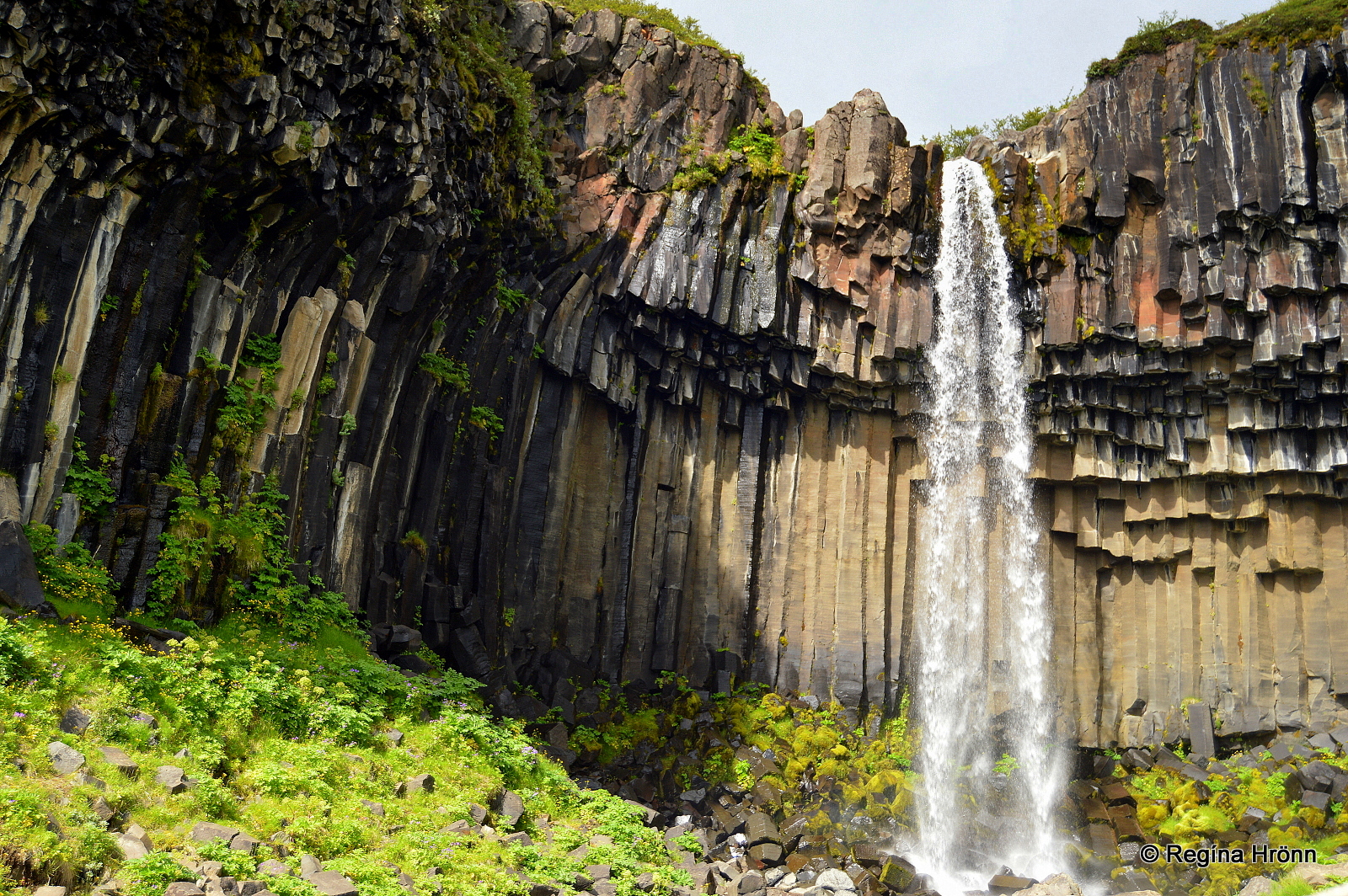 The Pearl of Skaftafell, Svartifoss waterfall, is hidden away in the national park, but due to its elegant beauty, it is a very popular attraction.

If you know where to look you can spot Svartifoss from ring-road 1 driving east, but it is hidden from view when you reach Skaftafell Visitor Centre.

Svartifoss is 20 meters (66 feet) tall, beautifully framed by columnar basalt formations, which give the waterfall a name – the Black waterfall or Black Falls. 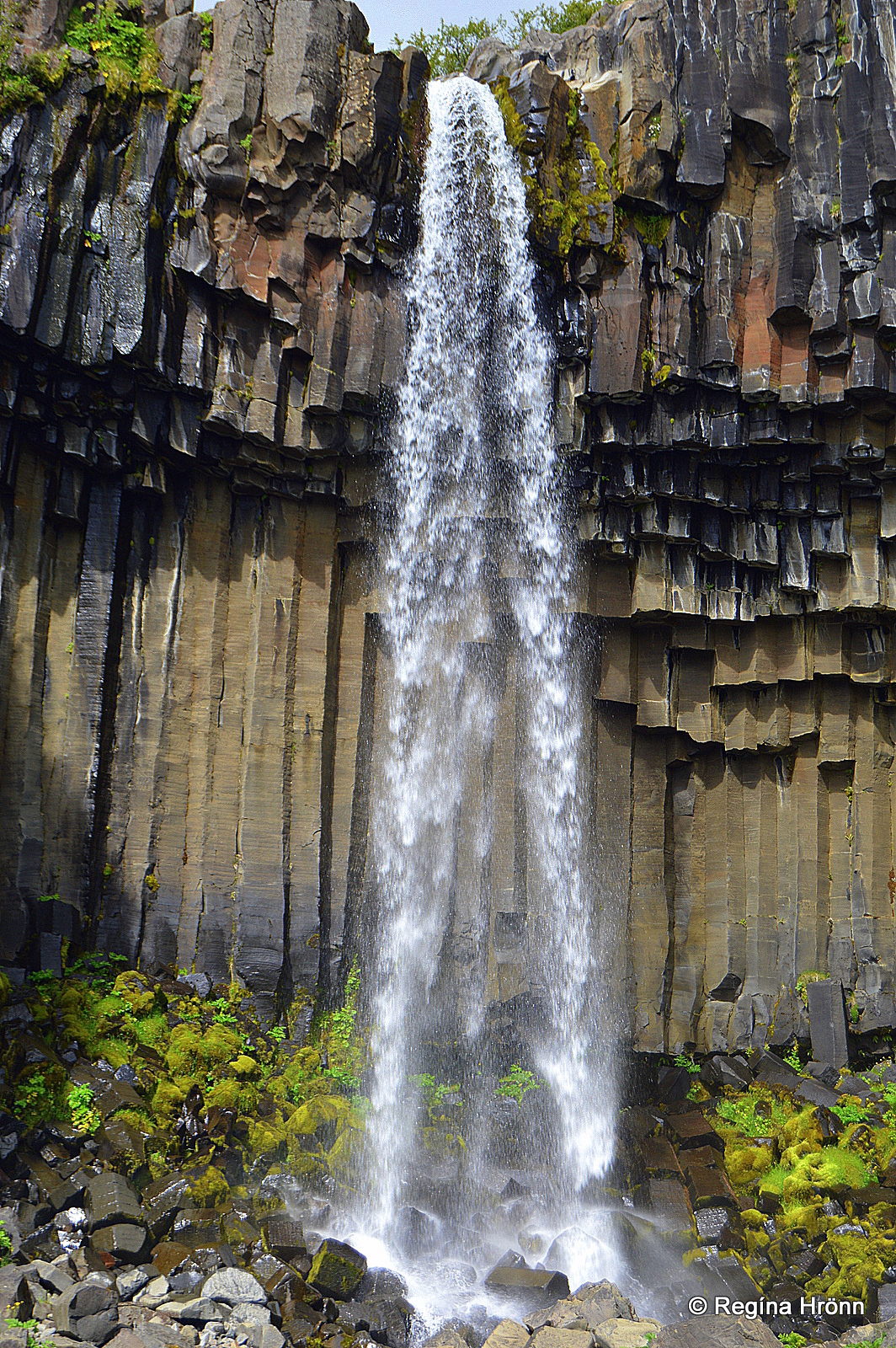 The hexagonal basalt columns are not totally black, they have many different colors, but some of them have got a black hue.

You will notice that the lower part of the basalt columns has collapsed due to erosion.

The basalt columns at Svartifoss waterfall look like pipe organs – nature’s work of art at its finest, in my opinion. 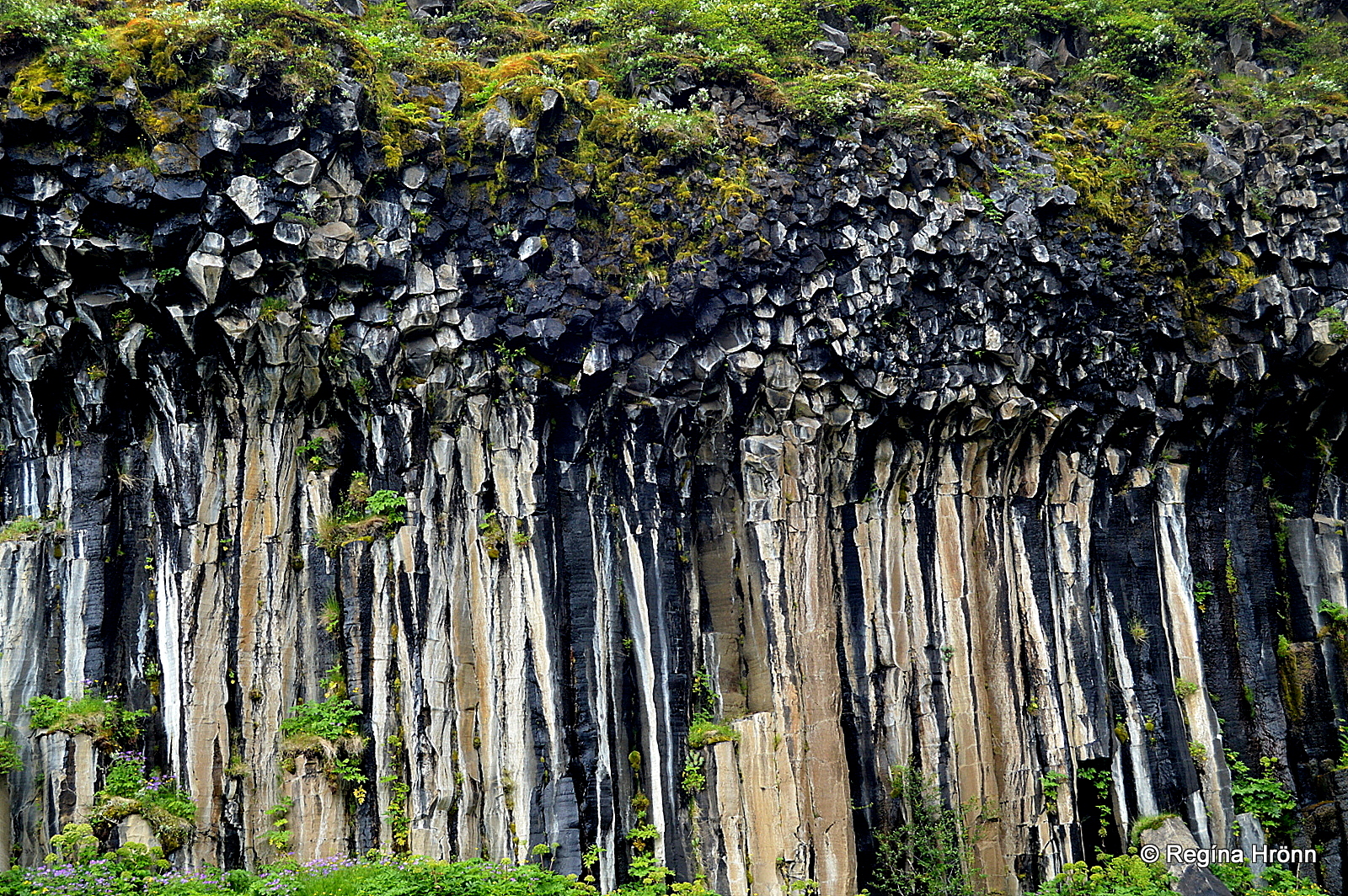 This beautiful artwork of nature is my absolute favorite here in Iceland, and I seek out basalt column locations on my travels around my country.

Another lovely waterfall that cascades from extraordinary basalt columns is the Aldeyjarfoss waterfall in North Iceland. 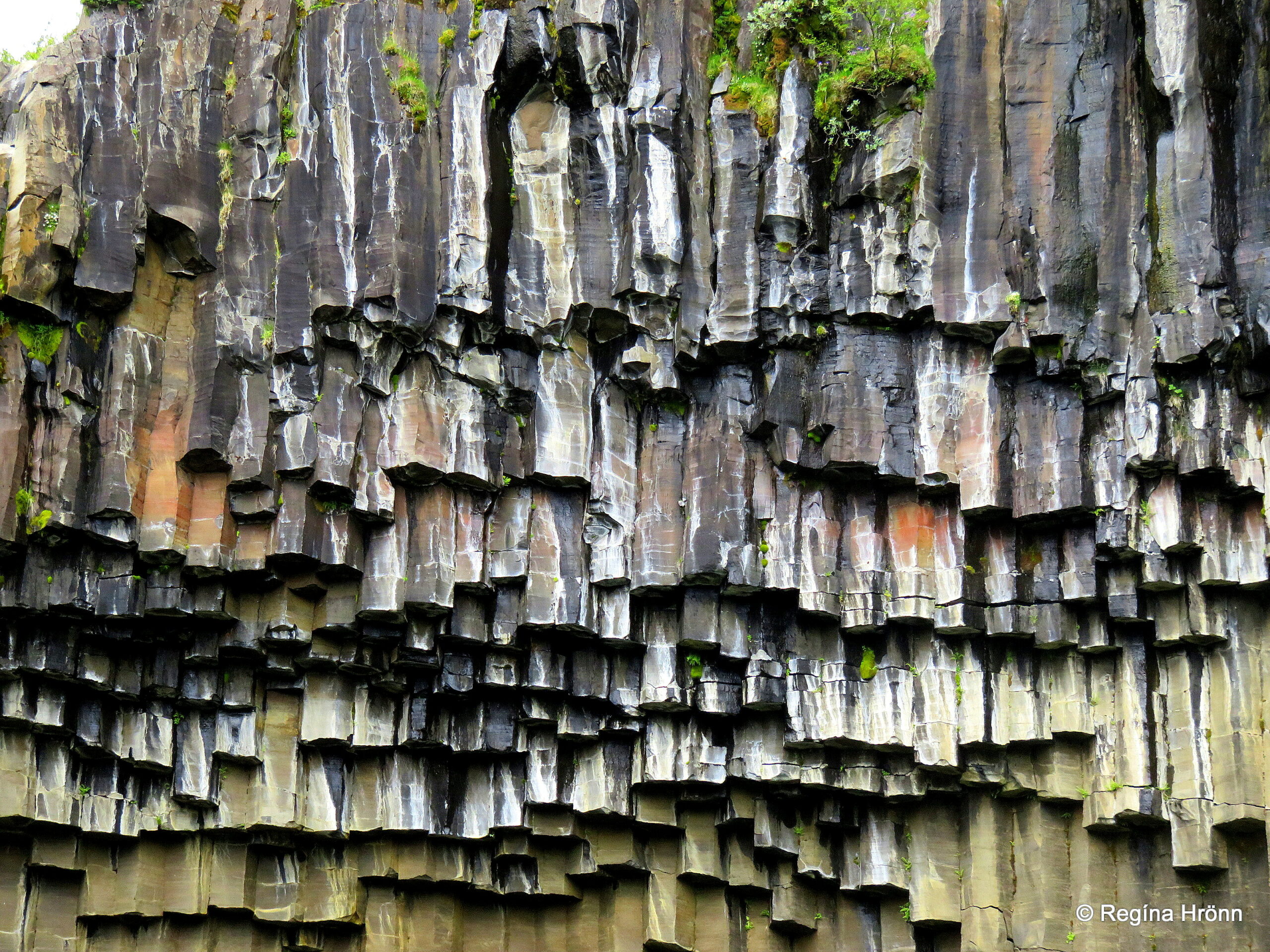 Iceland’s State Architect Guðjón Samúelsson is believed to have been inspired by the hexagonal basalt columns when he designed the ceiling in the National Theater of Iceland.

He is also believed to have been inspired by the shape of these beautiful basalt columns when he designed the Hallgrímskirkja church, the landmark of Reykjavík.

And Akureyrarkirkja church which I showed you in my Akureyri – the magical Capital City of North-Iceland travel-blog. 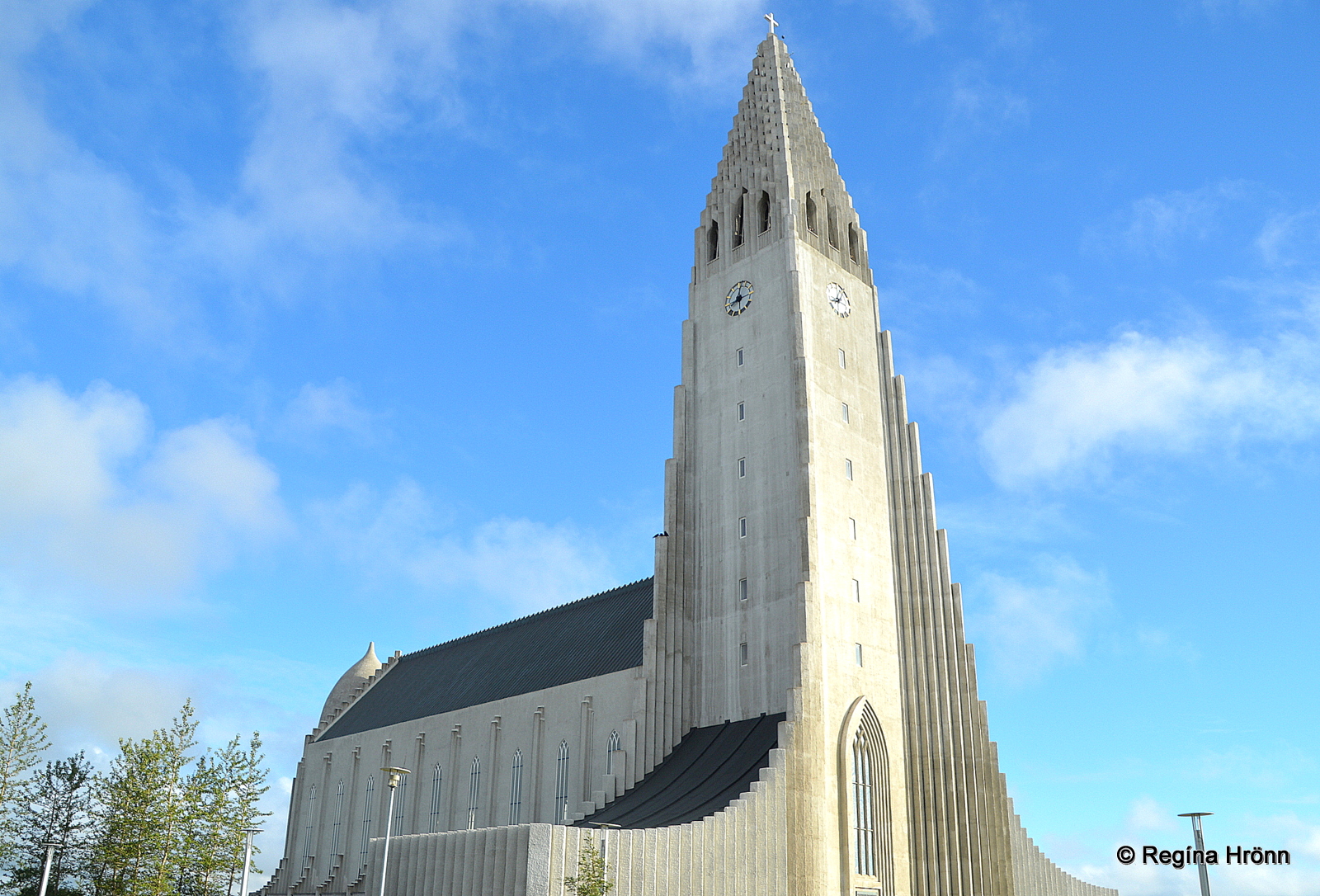 The hike to the waterfall is not long, only approximately 1.5 kilometers from the Visitor Centre, but parts of it are uphill so it might seem longer. It is not difficult though, as such.

When you spot the Svartifoss waterfall from afar as you hike towards it, you will notice that it is heart-shaped. Some people see an amphitheater, but I see a heart. 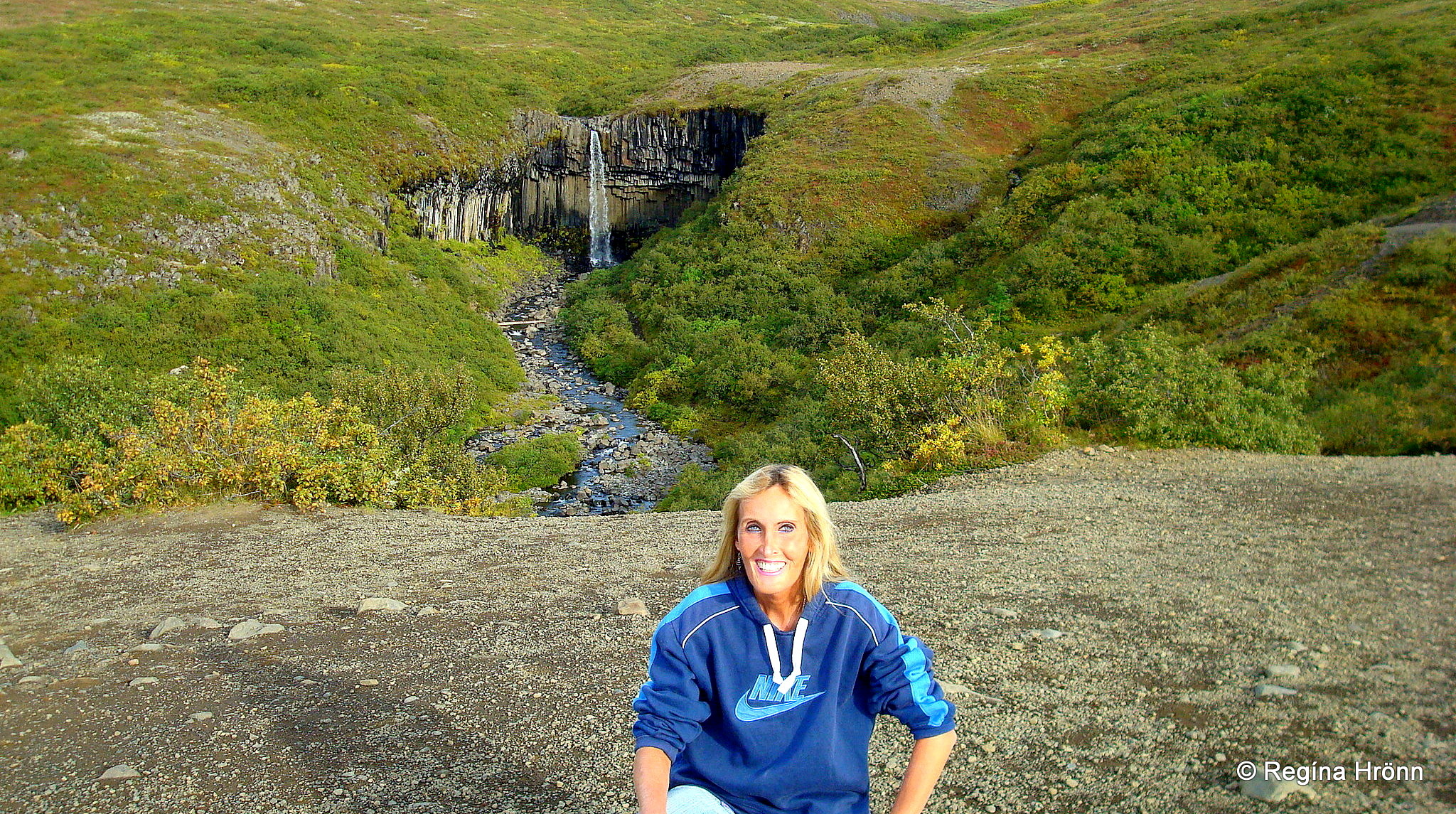 The heart-shaped Svartifoss in the distance

So it is quite a romantic waterfall as well as being elegant. A girlfriend of mine got engaged by Svartifoss, hint, hint for those of you who are thinking about proposing 🙂

I am often asked about romantic places in Iceland, which are ideal for a proposal – there are many and Svartifoss is high on that list. 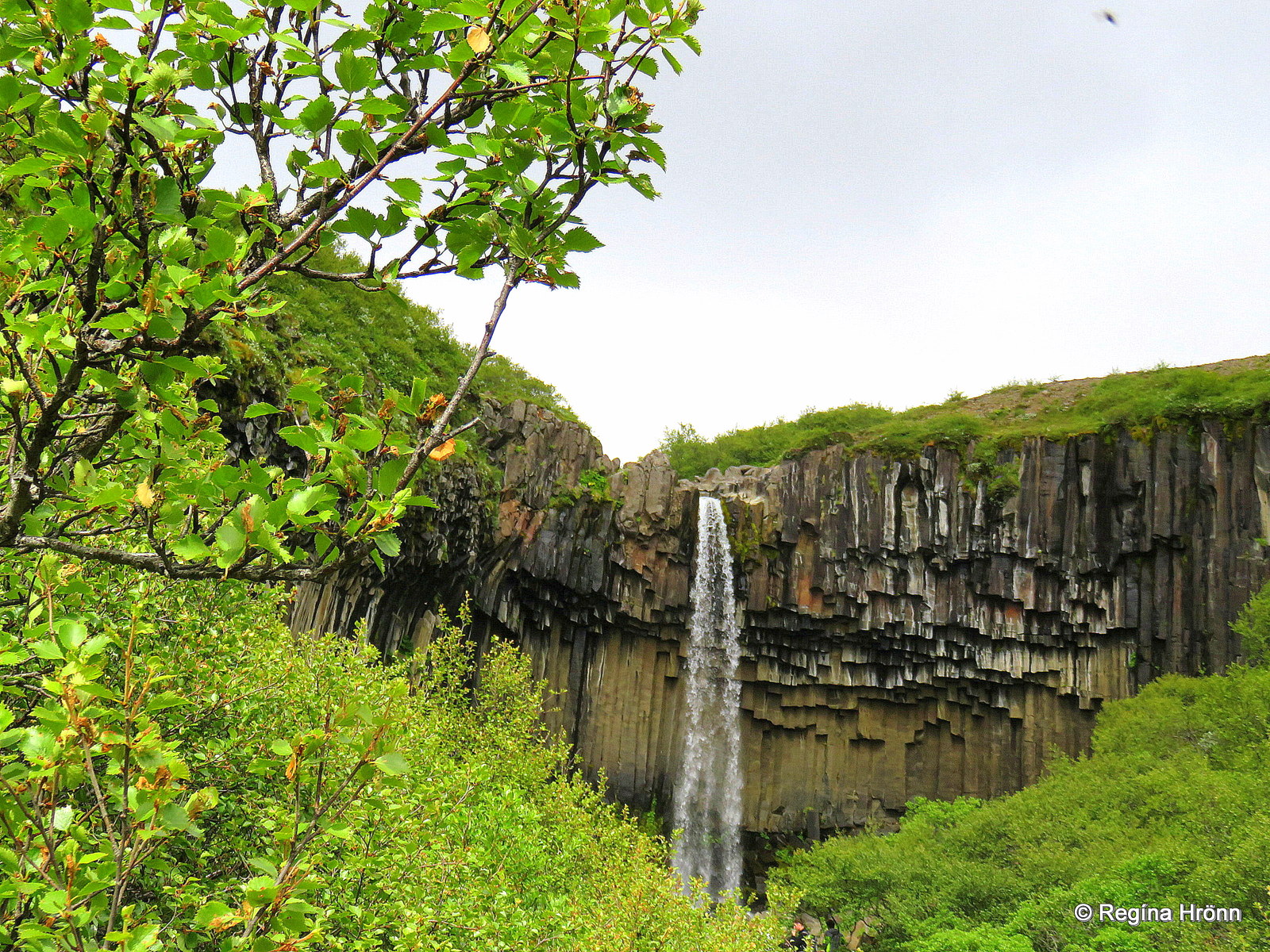 The river Stórilækur – Big Creek feeds the Svartifoss waterfall, but even though it is almost surrounded by glaciers, the water is not glacial water as you can see from the volume and color of the river.

The source of the river is below Kristínartindar mountain peaks.

Stórilækur runs from Skaftafellsheiði heath and into Bæjargil gorge where it creates the beautiful Svartifoss. 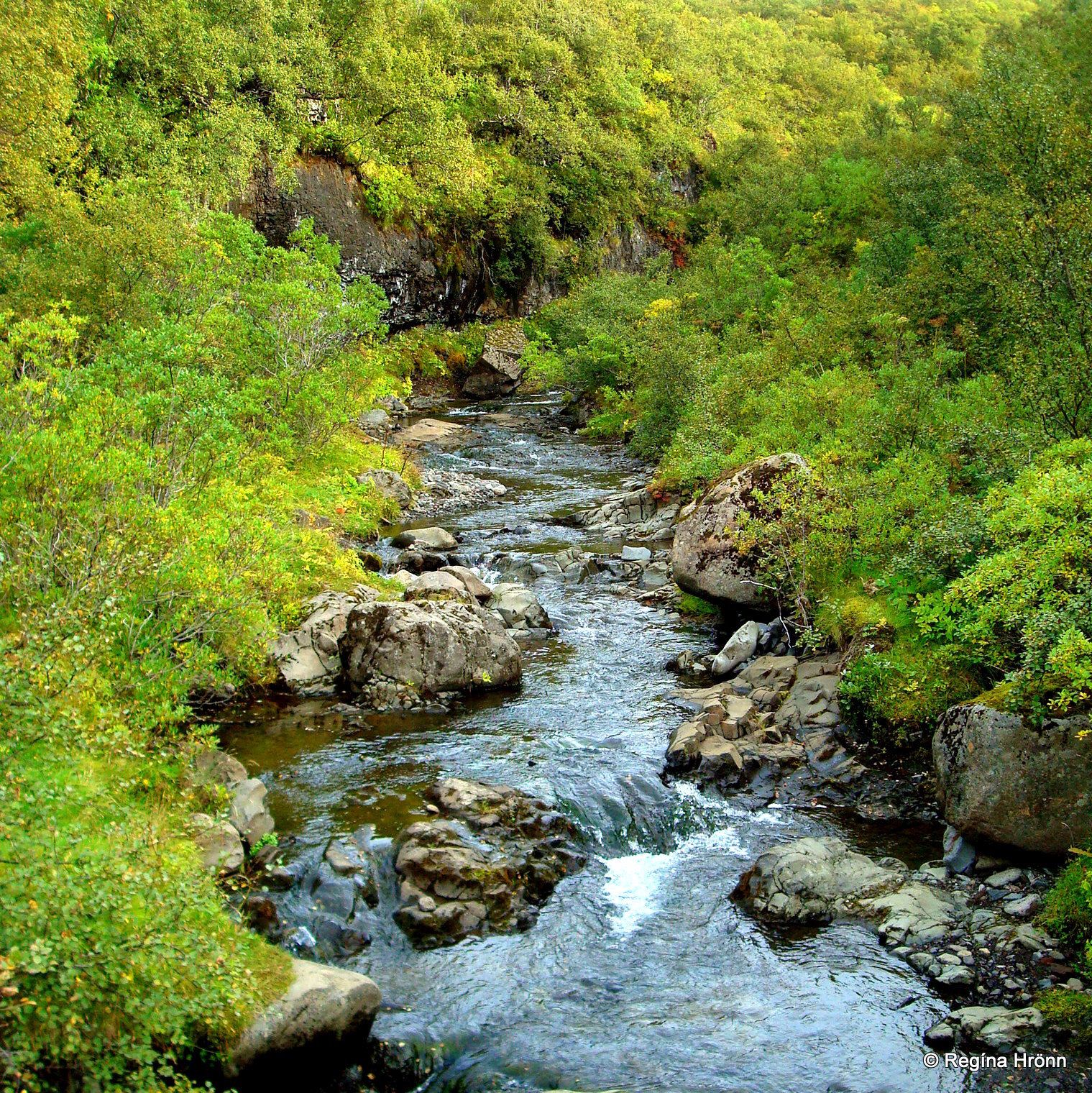 The small river then travels down the gorge and creates 3 other smaller waterfalls until it reaches the massive glacial outwash Skeiðarársandur black sands.

They are pretty, but the pearl of Skaftafell is by far Svartifoss waterfall. 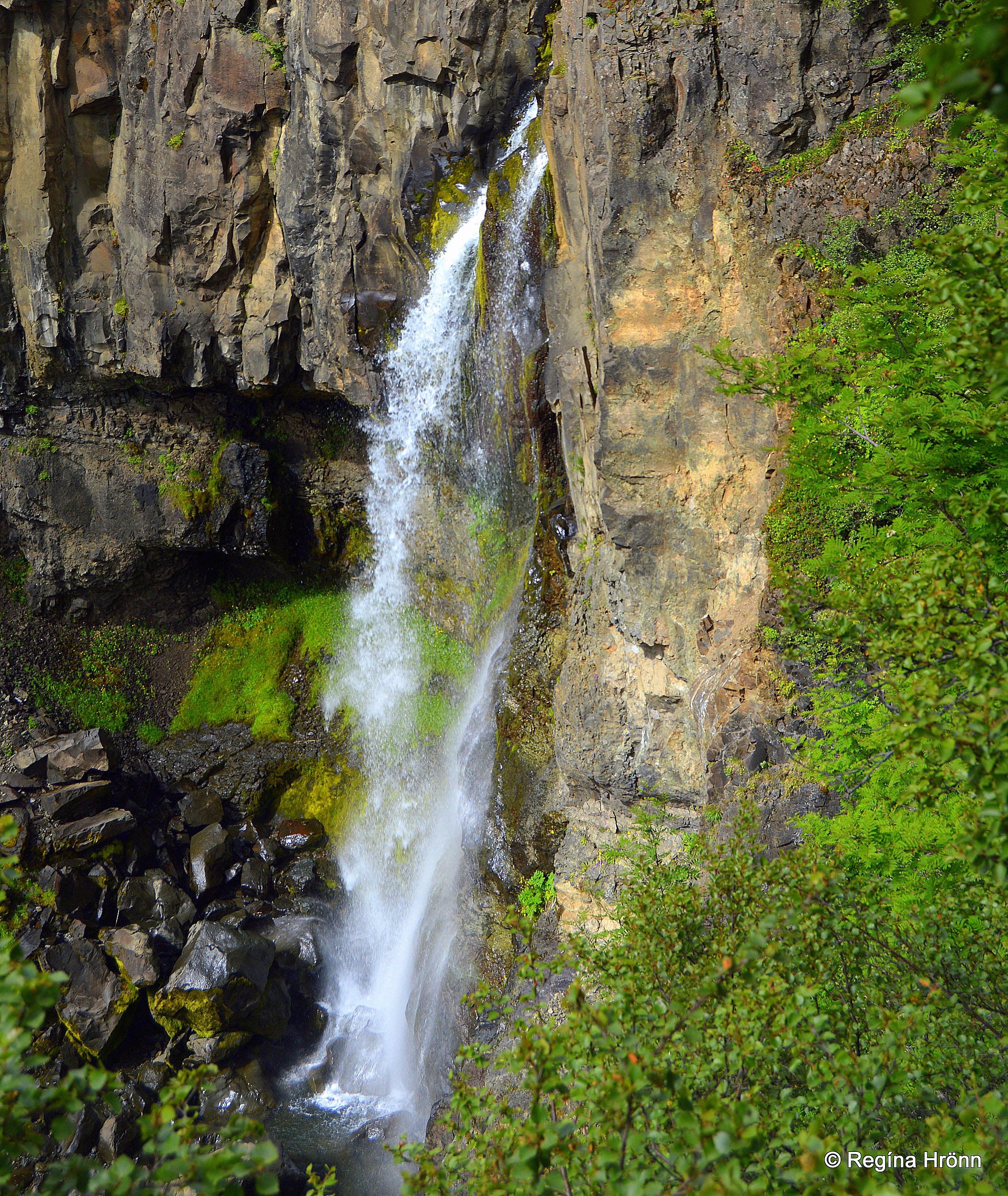 The Waterfall of the Dogs is believed to have got its name because dogs sometimes floated from the waterfall during the swelling of the river.

We don’t know the origin of the name of Magnúsarfoss waterfall, but Magnús is an Icelandic man’s name. 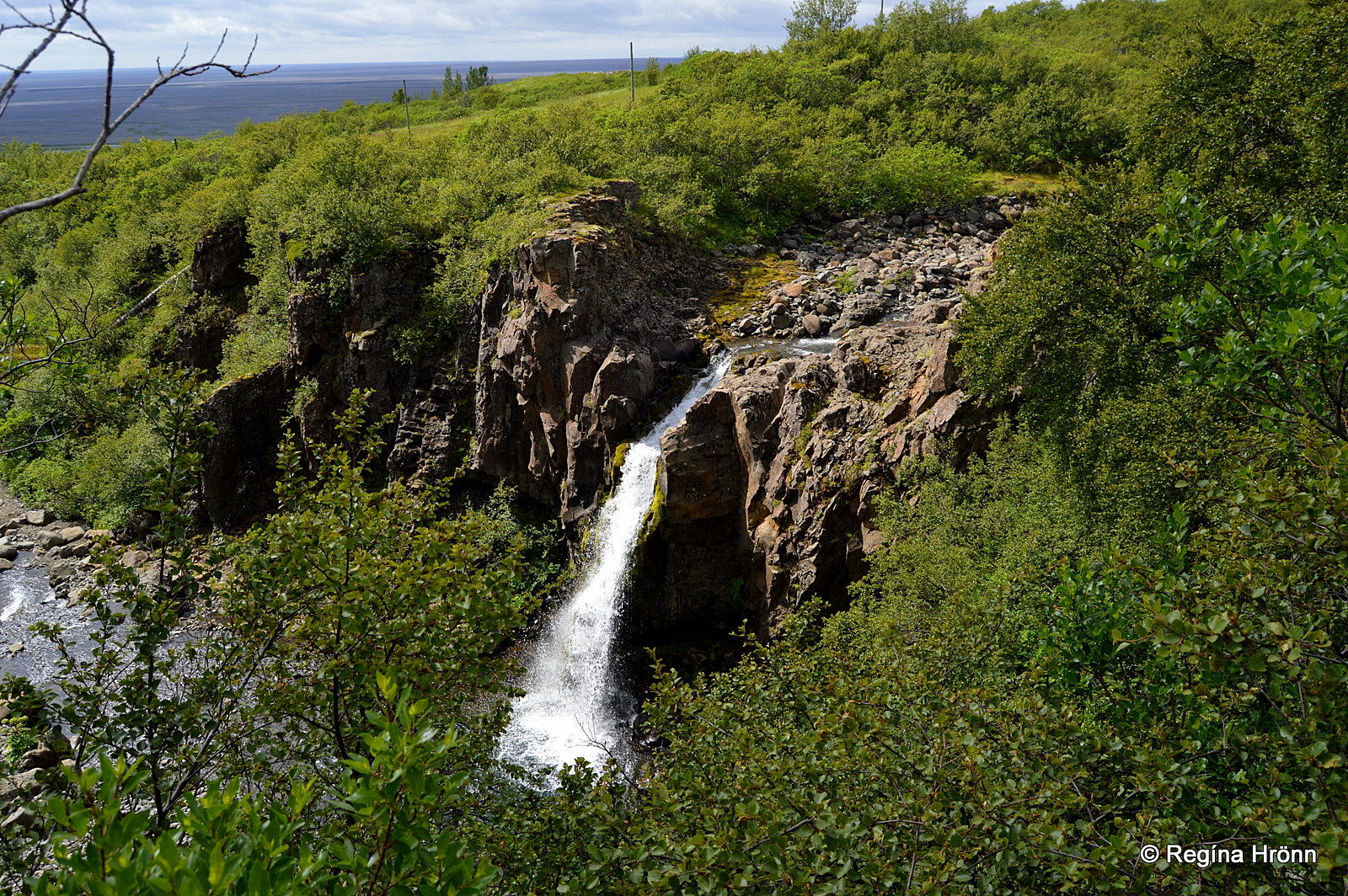 The origin of the name Þjófafoss – the Waterfall of the Thieves has given us something to ponder about, could it be that thieves were thrown into the waterfall?

But thieves were usually hanged in Iceland in the olden times, so that is rarely the origin of the name. 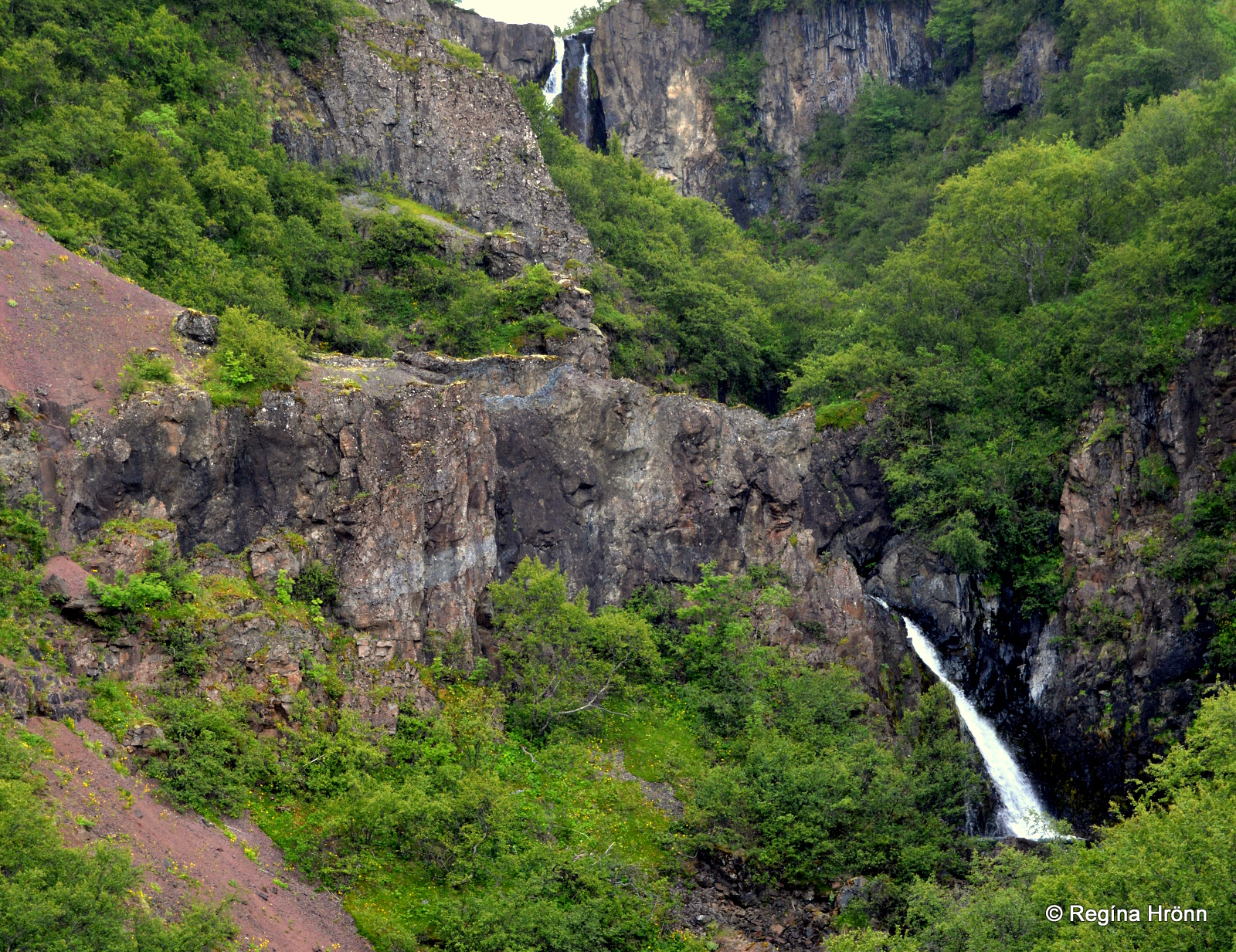 Back and forth the hike to Svartifoss waterfall takes approximately 90 minutes with plenty of photo stops.

There is another circular hike which is 5.5 km long.

On that hike, you will see the view-dial at Sjónarsker, the turf house Selið, and Lambhagi pastures, a beautiful and serene spot in Skaftafell. 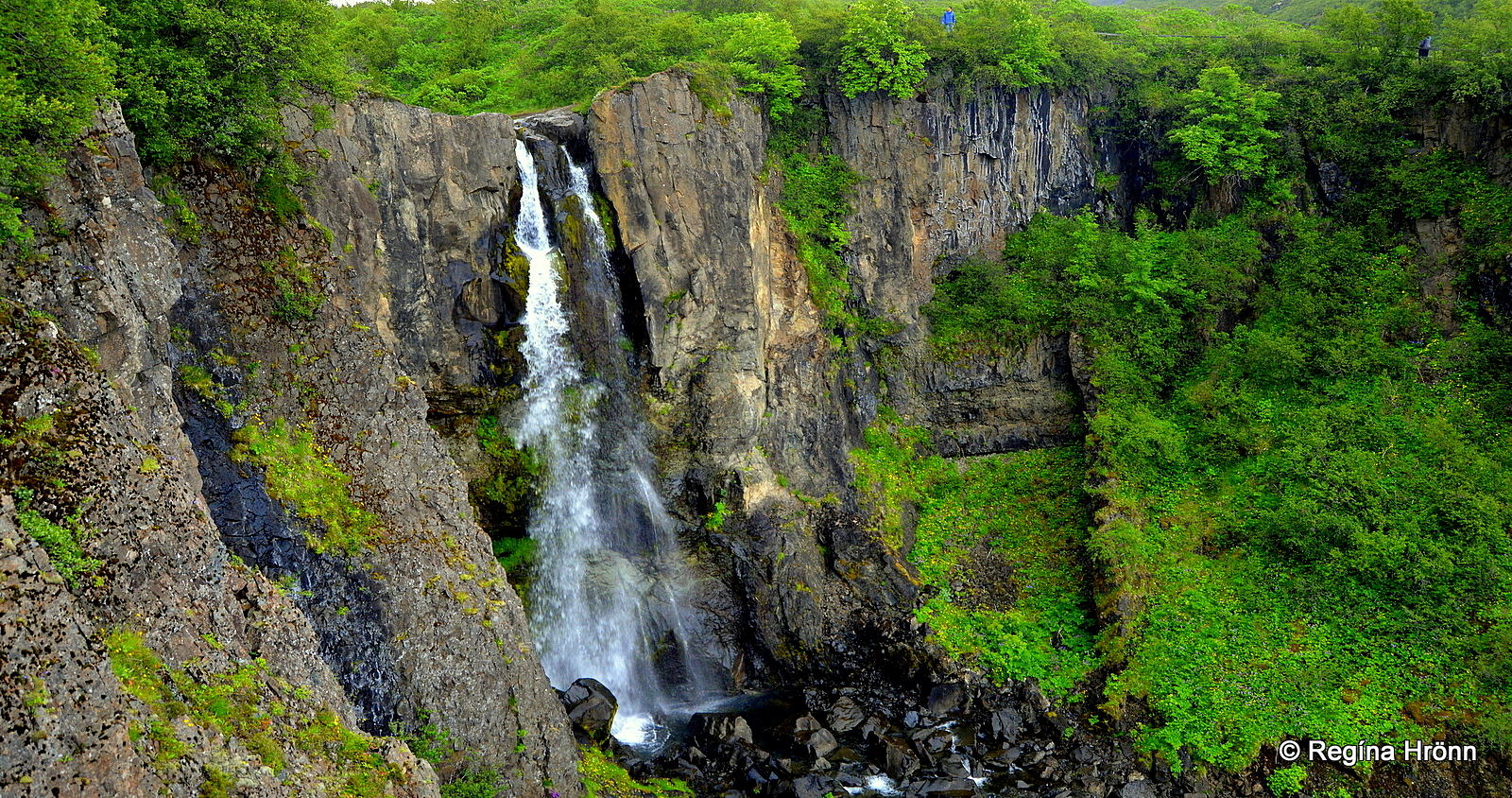 On that hike, you will also get a different view of the waterfalls.

That hike is approximately 2.5-3 hours long with plenty of photo stops.

The view dial at Sjónarsker

You might want to include the viewing point at Sjónarsker in your hike.

It is on the other side of the river, a short hike with a great view of this beautiful area. Here we are at 310 meters (1,017 ft) above sea level.

At Sjónarsker you will also find one of the 90+ view-dials in Iceland.

The view-dial at Sjónarsker was erected by the Icelandic Department of Education back in 1973. 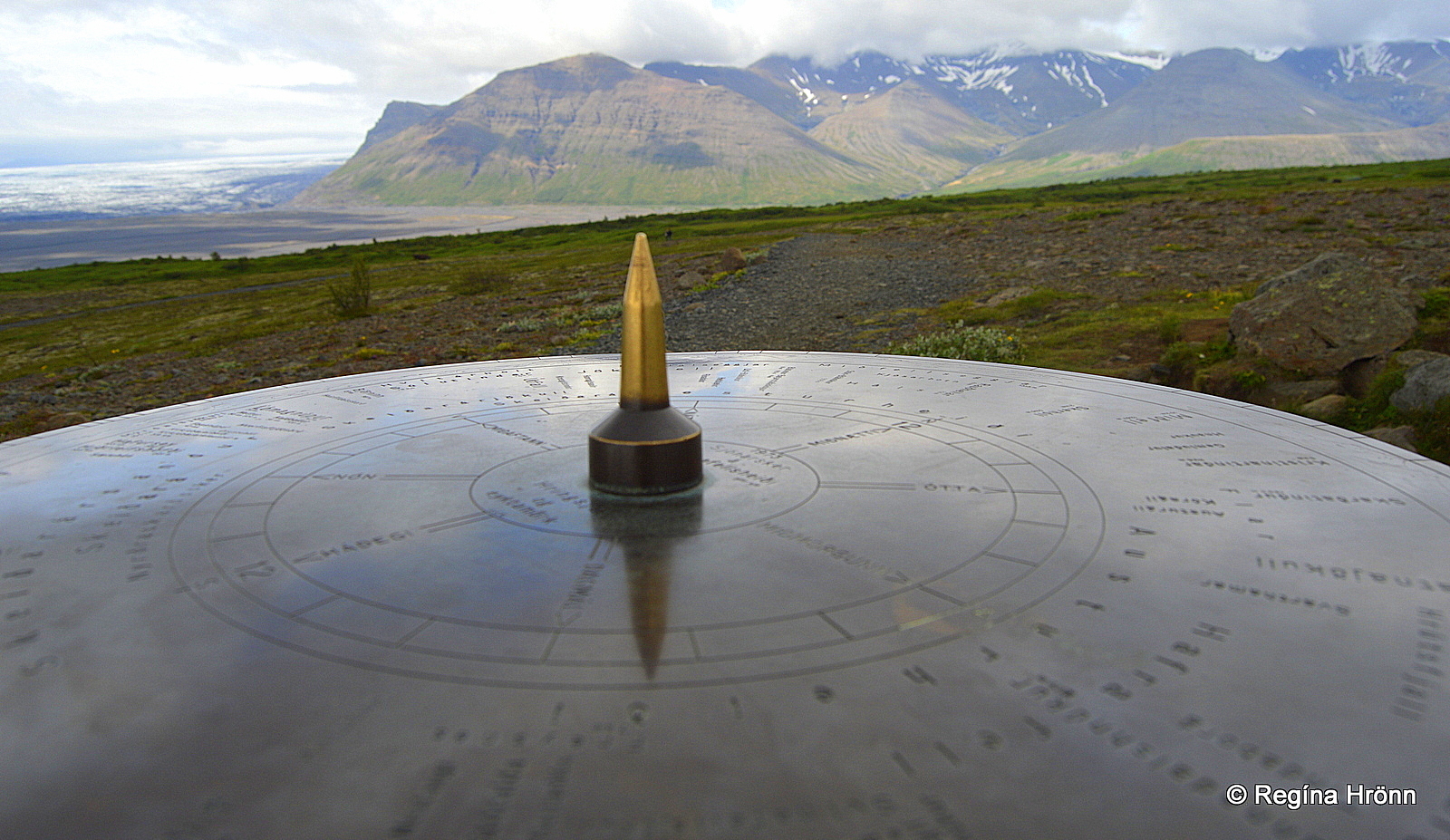 This view-dial was designed by Jón J. Víðis, who was the instigator of view-dials in Iceland and erected the 1st Icelandic view-dial back in 1938.

Jón Víðis erected all in all 23 view-dials in Iceland until Jakob Hálfdanarson, my father-in-law, took over his work.

One of the few remaining turf houses in Iceland is hidden away in Skaftafell nature reserve. Selið is a relatively small turf house, built in 1912 from driftwood, rocks, and turf.

But as this area was dominated by the unpredictable glacial river Skeiðará, which destroys everything in its track then the old turf farm was moved from its original location up on the hill.

A cowshed was under the living room, as the warmth from the cows was utilized in the olden times. 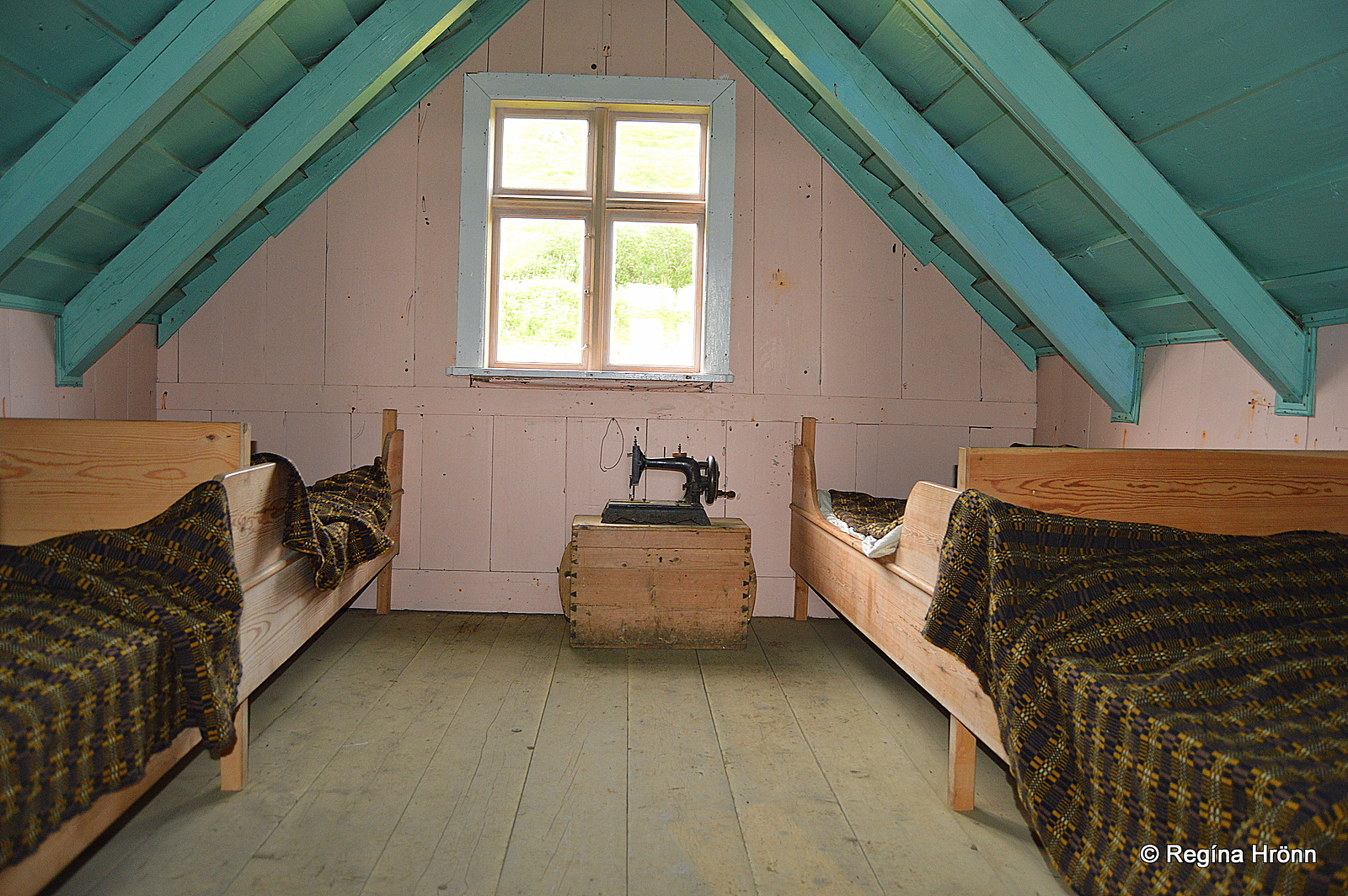 Inside Selið turf house in Skaftafell

The last inhabitants moved out in 1946, and Selið has belonged to Þjóðminjasafnið – the National Museum since 1972.

The National Museum restored the turf house, which is now a museum open to visitors at certain hours. You can get more information at the Skaftafell Visitor Center.

Let’s always tread lightly in the turf houses, as they are our inheritance from past generations and need constant maintenance. 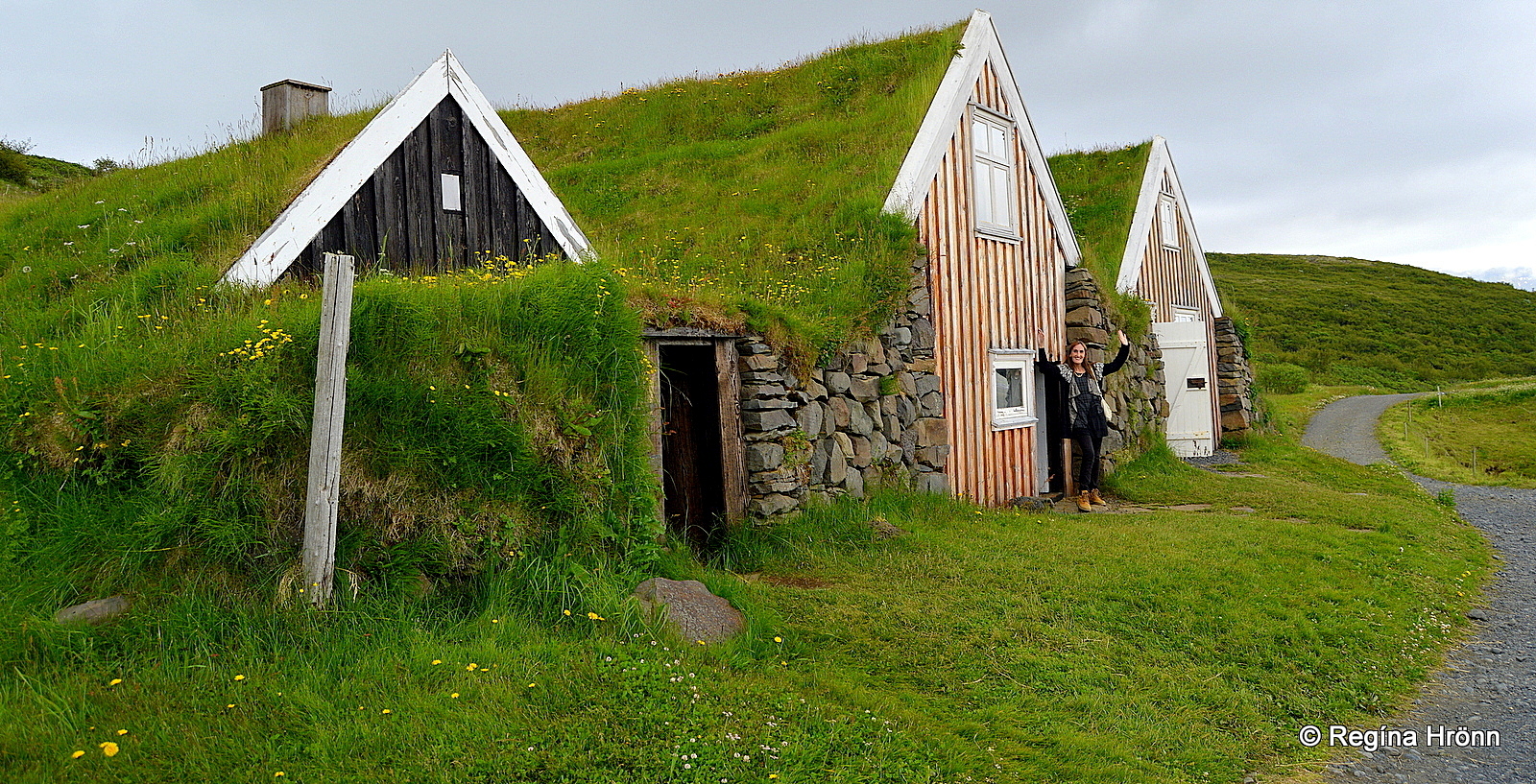 If you are interested in the Icelandic turf houses then you might want to have a look at my travel-blog: A List of the beautiful Icelandic Turf Houses, which I have visited on my travels in Iceland. 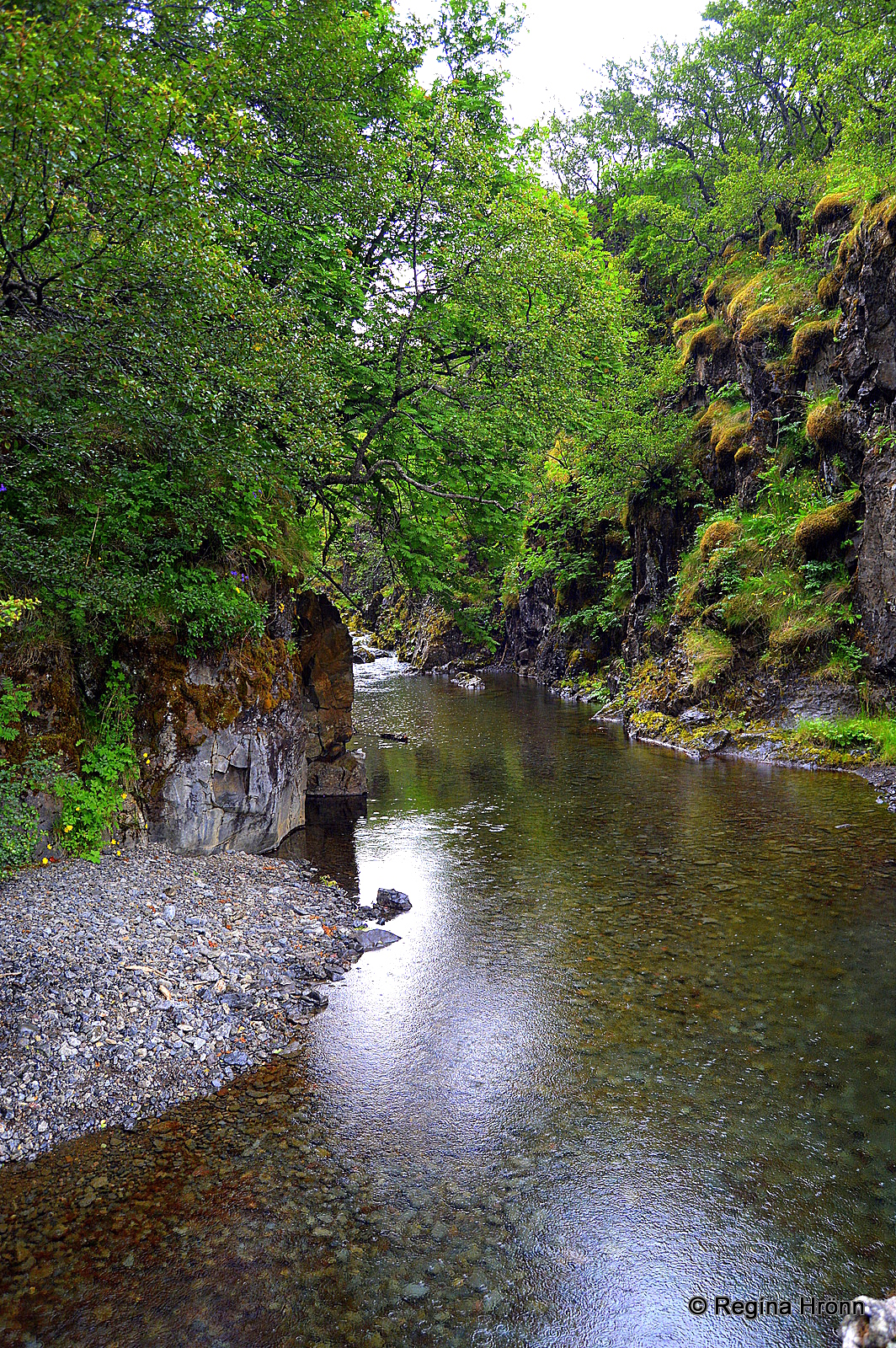 On the west side of the river flowing from the Svartifoss waterfall, you will find such a lovely, serene spot, Lambhagi – the Lamb pastures. It is my favorite spot in Skaftafell.

Here the farmers kept the lambs overnight and milked the ewes in the morning.

Then the lambs and ewes were allowed to stay with each other for the day. Of course, enough milk was left for the lambs to grow strong. 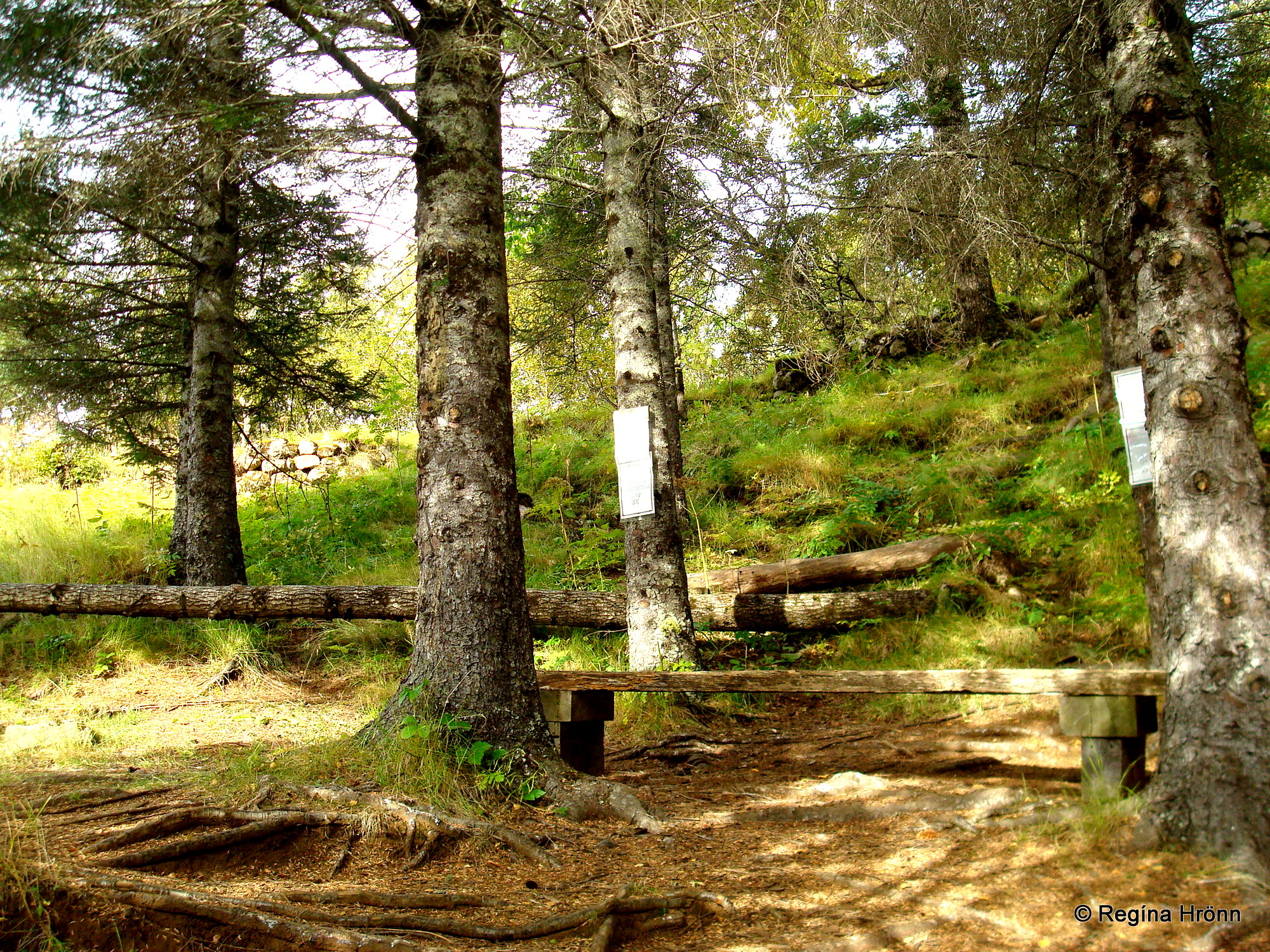 There used to be a waterfall by Lambhagi pastures, but the massive glacier floods in the Skeiðará river destroyed that waterfall.

It is believed that since 1800 the land has risen by some 10 meters due to these glacial outbursts.

After visiting the waterfalls a hike to the glacier edge of the Skaftafellsjökull glacial is in order.

It is an easy hike, 3.7 km back and forth from the Skaftafell Visitor Center.

You will notice how black and white the glacier is in my photo above. This is ash from volcanic eruptions which got trapped in the glacier. 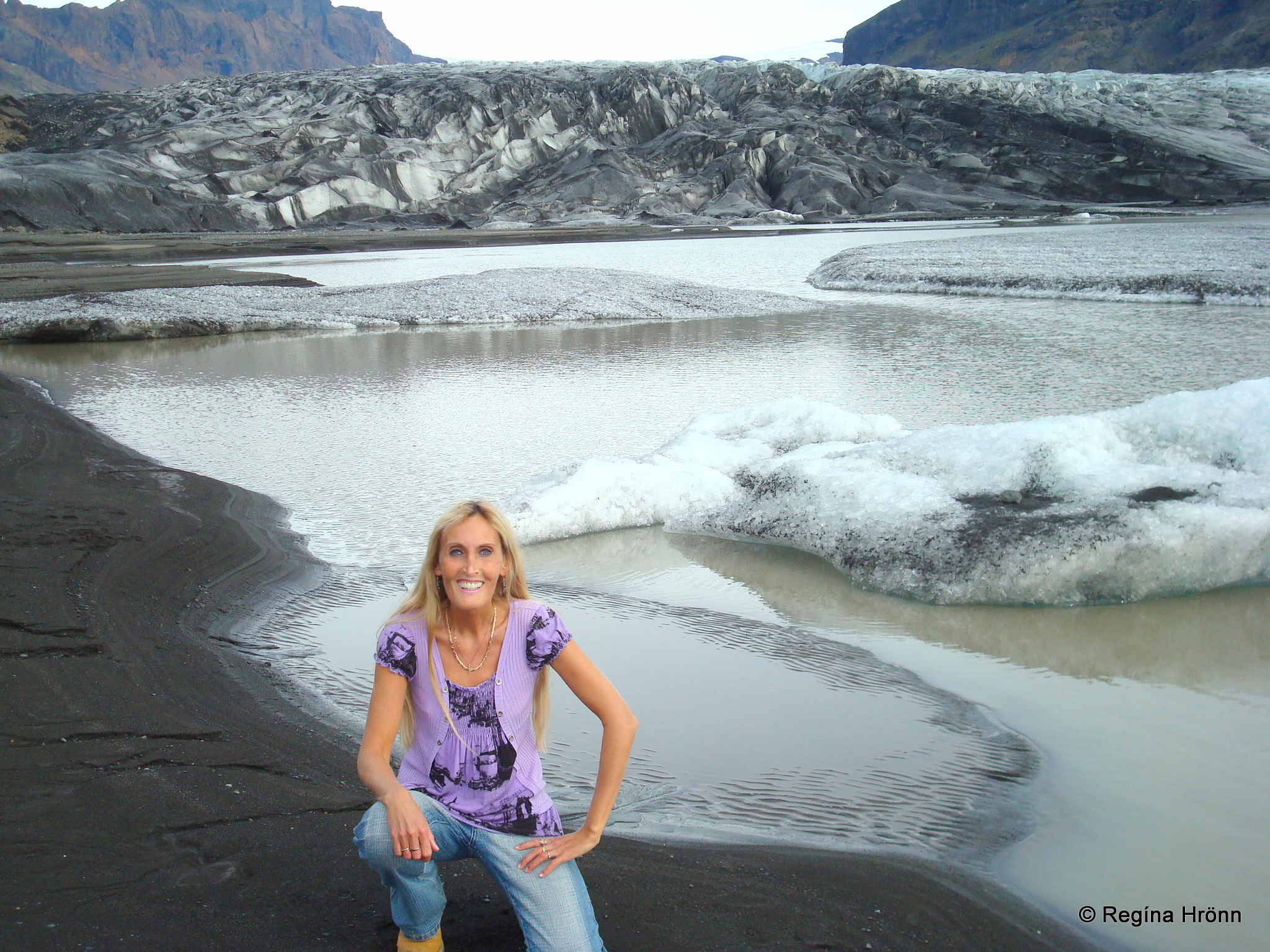 By the glacial lagoon of Skaftafellsjökull

In front of the glacier, you will find a glacial lagoon with icebergs floating on it, which have calved from the glacier.

As you get closer to the glacier you will notice that the temperature drops.

The photo above was taken late in September and I took off my down-parka for the photo. I was absolutely freezing 😉

Skaftafellsjökull glacier in the winter sun

The photos I include above and below I took on an ice-cold November afternoon, when the last rays of the sun cast a pink and orange hue on the glacier, creating a very mystical atmosphere.

Be careful in this area and never hike on the glacier without a guide. There are many guided glacier hikes available at Skaftafell. 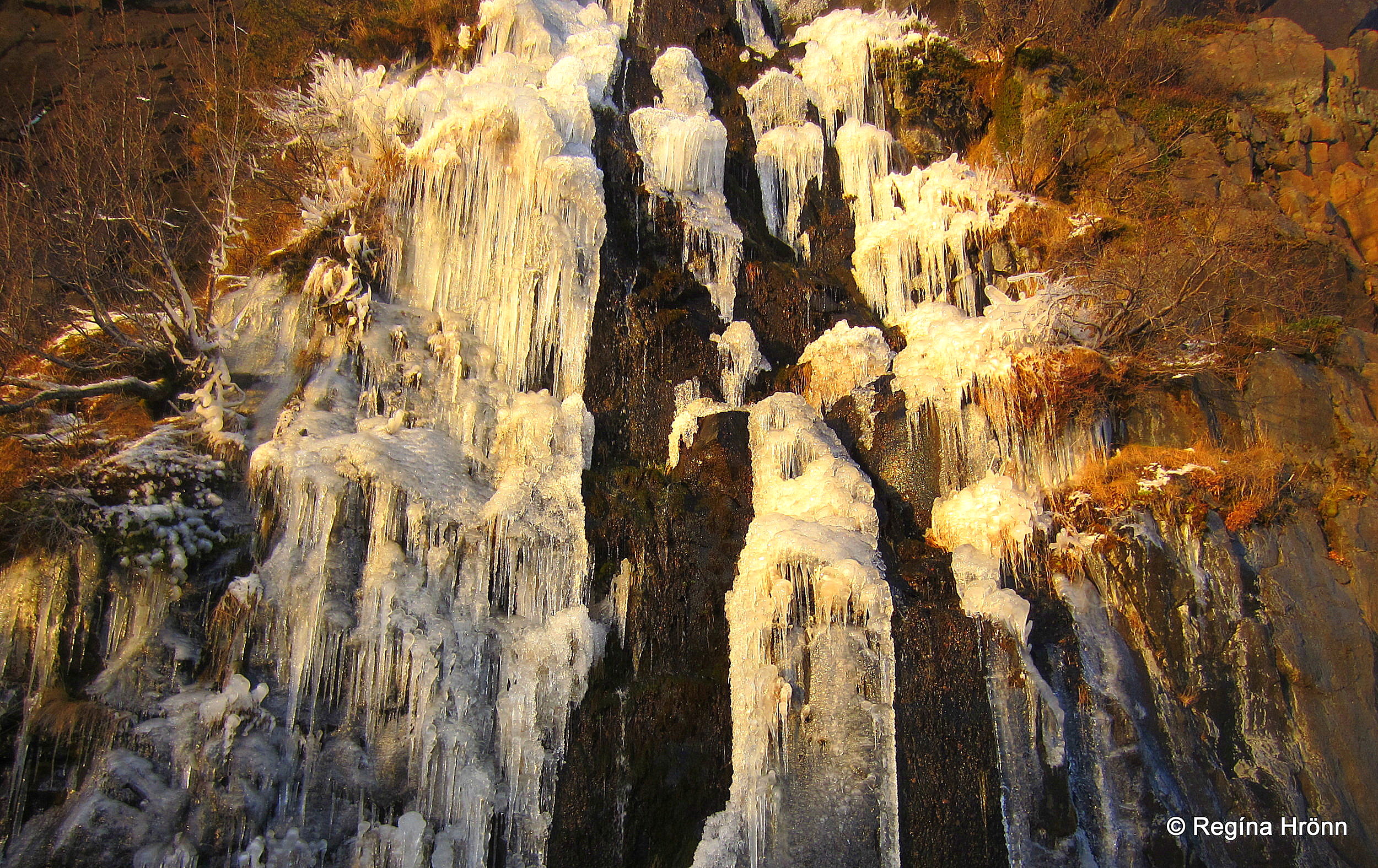 The return hike is approximately 1.5 hours.

On the way back from the glacier the creeks by the path were frozen and took on the most beautiful and majestic ice formations, as you can see in my photo above.

There are several other longer hikes in Skaftafell and one can spend days in the national park. It is such an amazing place to visit.

Skaftafell is located some 326 km away from Reykjavík, Iceland’s capital city on ring-road 1.

Have a lovely time in the beautiful Skaftafell 🙂

Other basalt column locations in Iceland are f.ex:

The spectacular Suðlagil canyon – the Pearl of East-Iceland

Reynisfjara Black Sand Beach – the One with the Basalt Columns