The latest attraction in East-Iceland is the magnificent Stuðlagil canyon - the Column Basalt Canyon, with spectacular basalt column formations through which a turquoise-colored river runs. 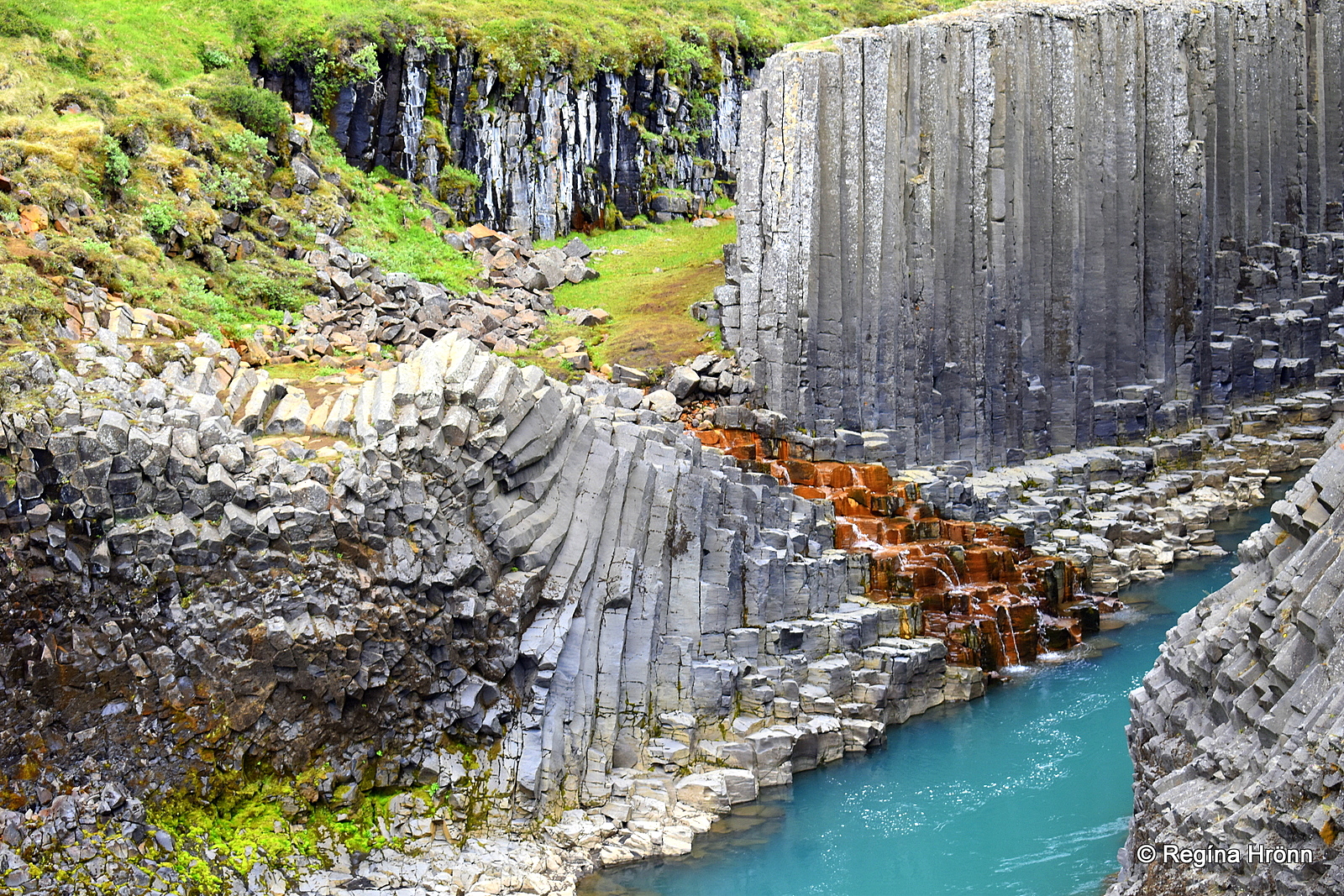 I have visited Stuðlagil canyon a couple of times from the farm Grund, where you can have a look at the canyon from above. In this travel-blog I am going to show you what the canyon looks like from the northern side of the river. 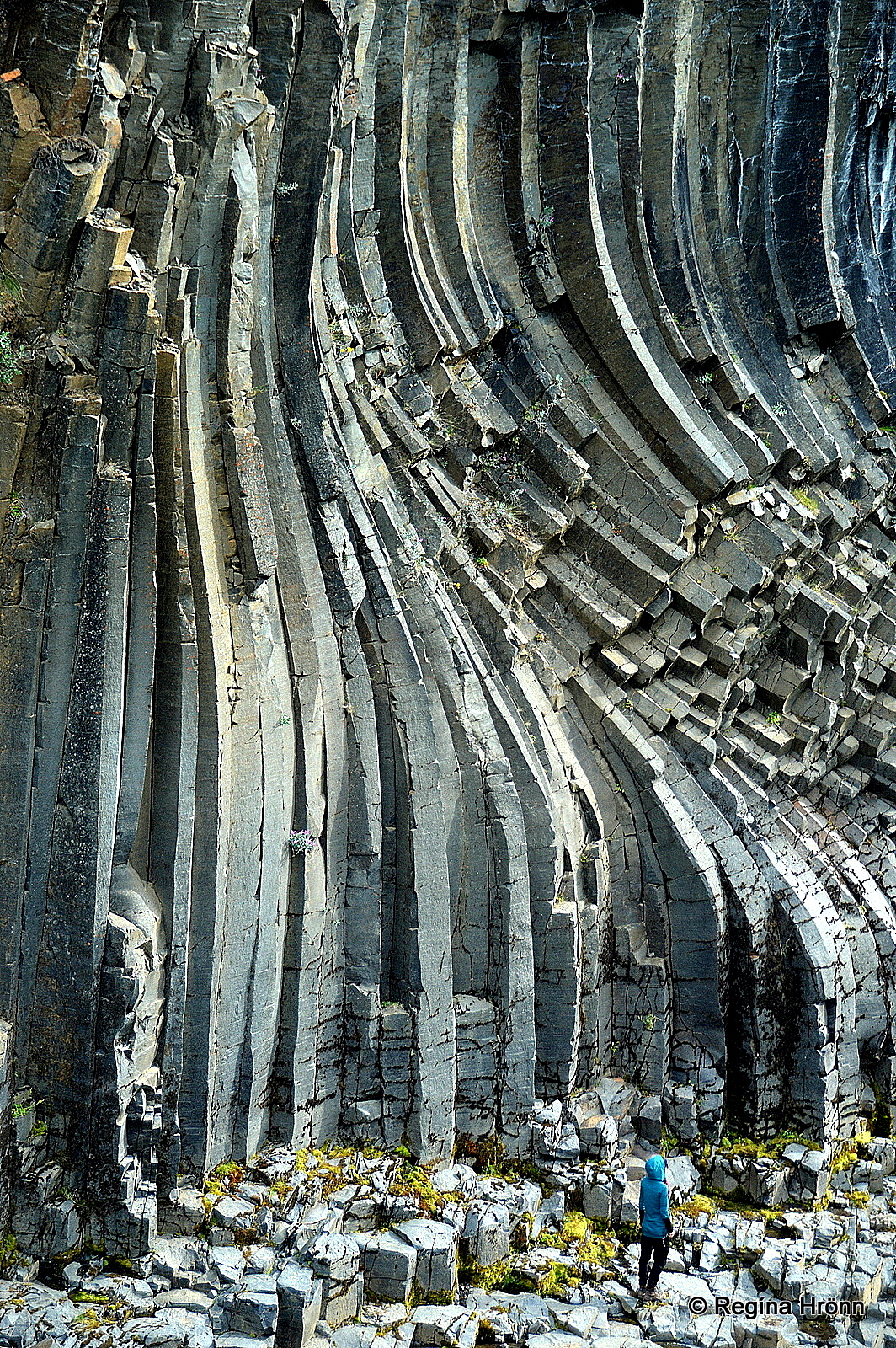 Stuðlagil can also be visited from the other side of the river, where a 5 km hike will take you down into the canyon itself.

Stuðlagil canyon is considered to have one of the largest selections of basalt columns in Iceland and you can see how huge they are in my photo above.

These basalt columns were not always visible, as they were submerged when the massive glacial river Jökulsá á Brú came running through the valley with great force, carrying tonnes of sediment. 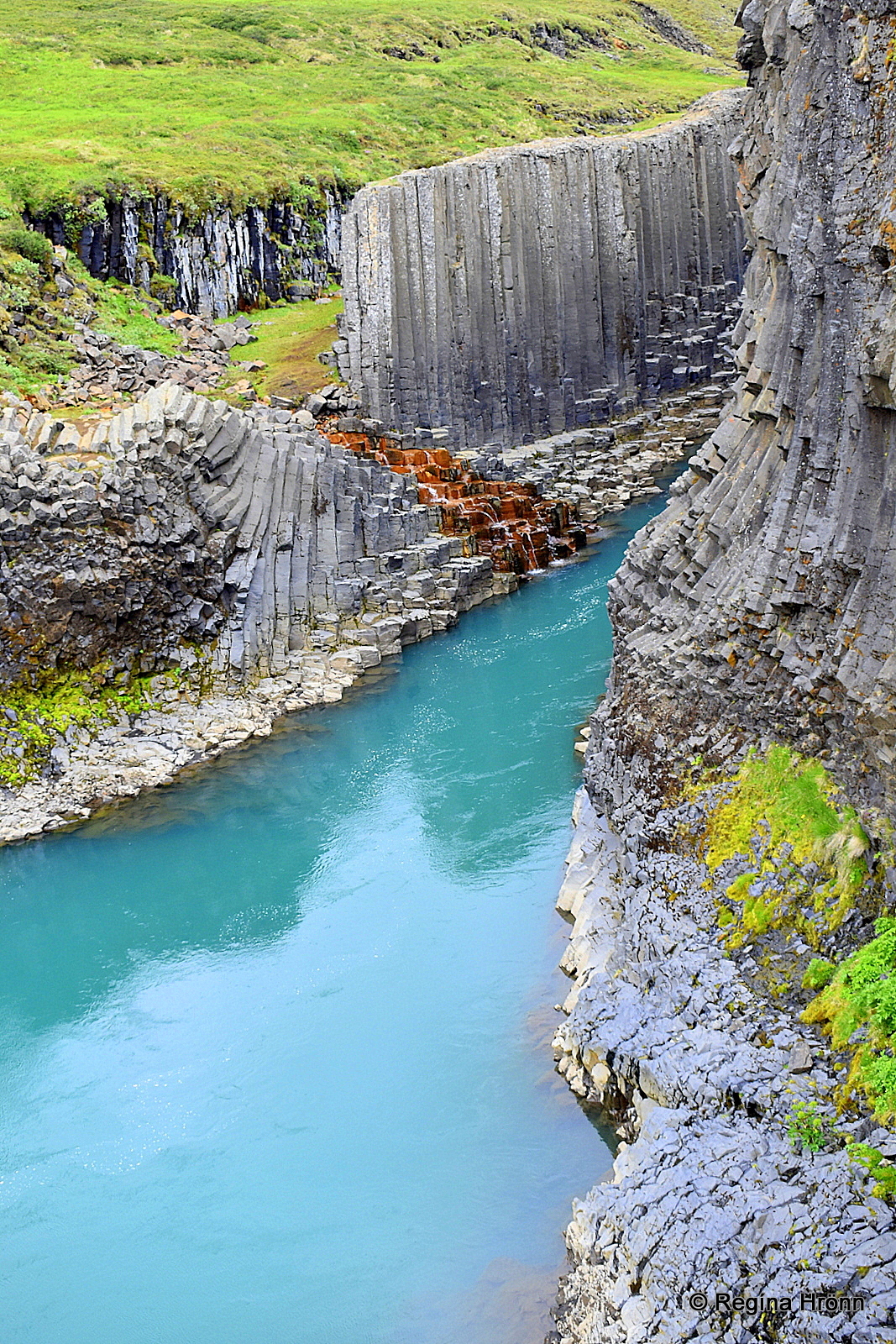 A turquoise color river runs through the canyon

In 2007 Kárahnjúkavirkjun hydroelectric power plant closed off the flow of the glacial river from Brúarjökull glacier into the Jökuldalur valley. The glacial water was then diverted into tunnels to Fljótsdalur station.

Now the low flow of the river comes mainly from side rivers and creeks. The water has got the most beautiful powdery blue and turquoise color, which perfectly complements the spectacular basalt columns. 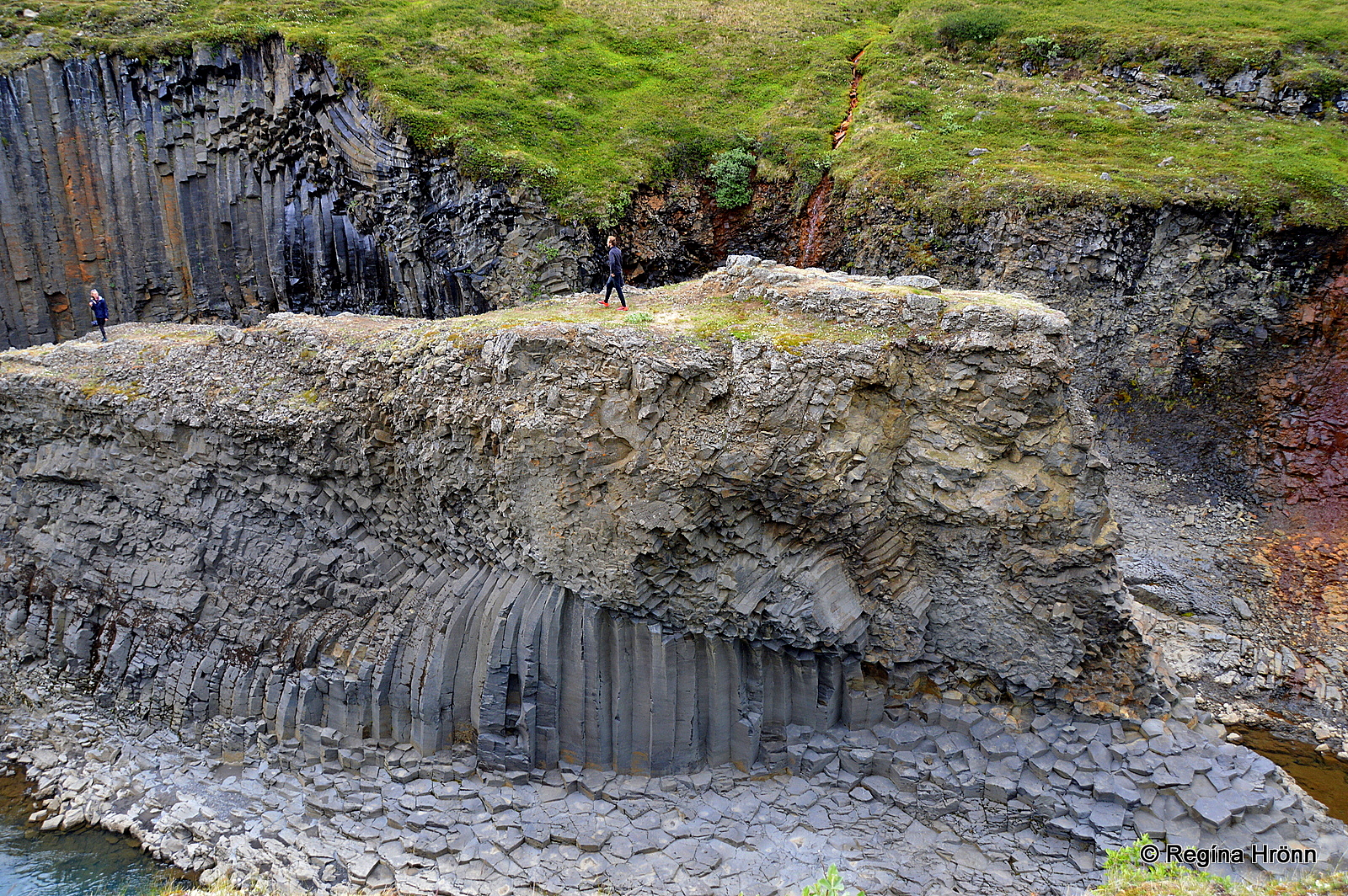 And nowadays it is even possible to walk inside the canyon and on top of the basalt column island which was once in the middle of a roaring glacial river, which separated the farms in the Jökuldalur valley.

The people in my photo above visited Stuðlagil canyon from the other side of the river, which is an even more scenic part of Stuðlagil, i.e. from where the most popular photos of Stuðlagil are taken. 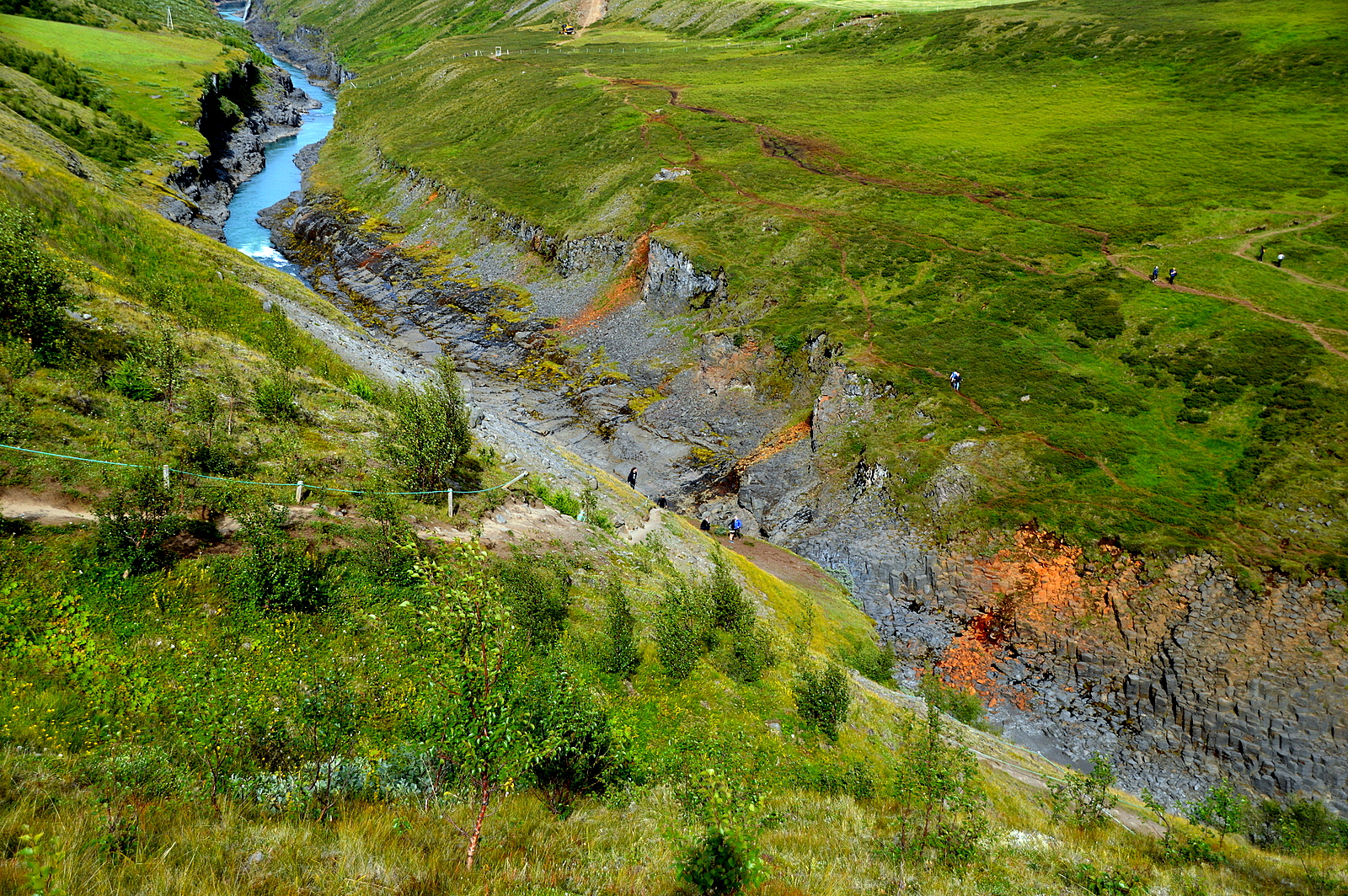 The steep path leading down into the canyon

We, on the other hand, didn’t have time for a 10  km hike during this trip, so we visited Stuðlagil from the other side of the river, from the farm Grund.

The farm used to be a sheep farm, but now grows trees.

From the Grund side of the river Jökulsá á Brú, the access into the canyon is via a steep path above the canyon. 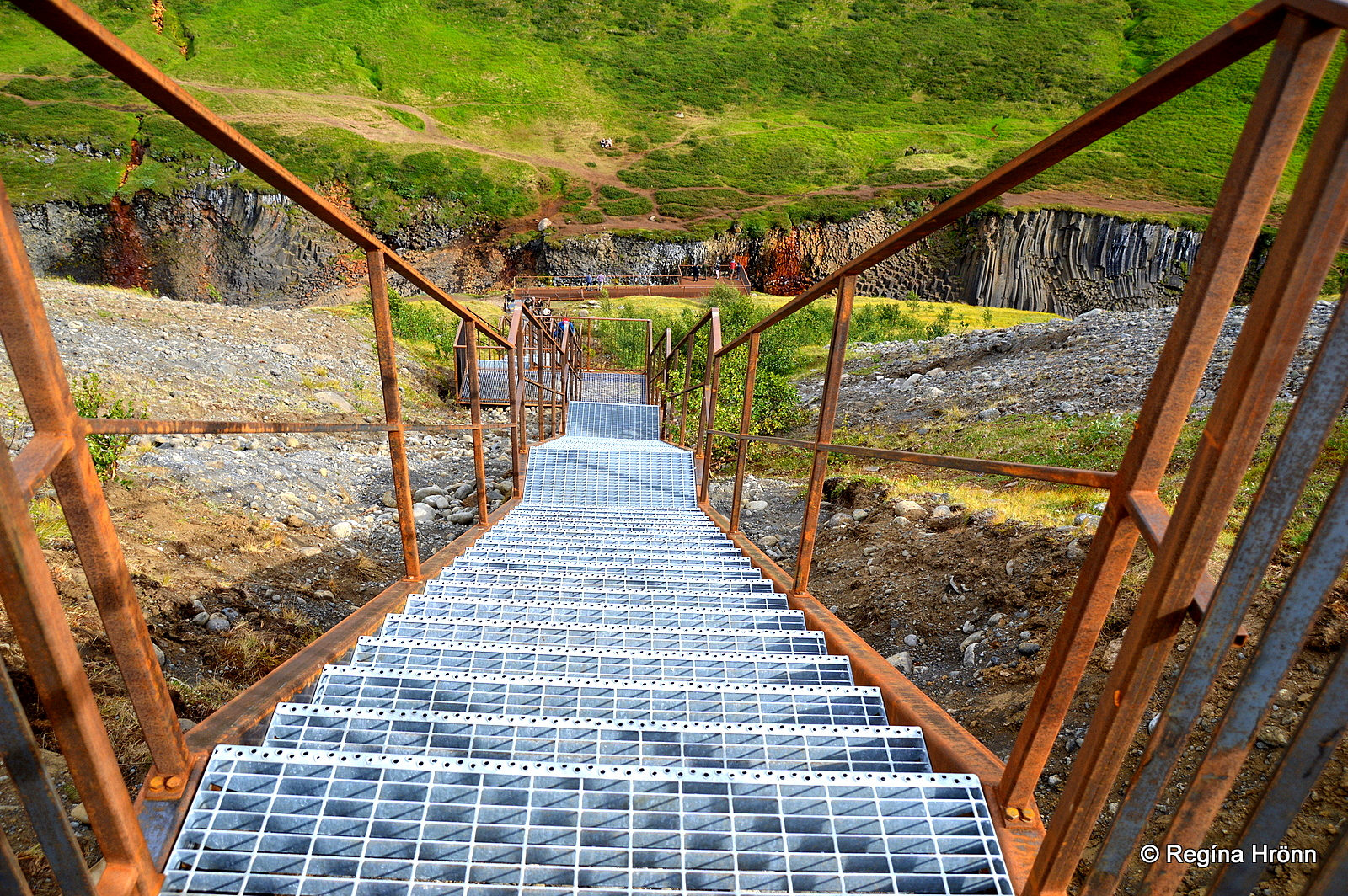 A parking lot with information signs and an observation platform further down into the canyon was being erected during my first visit, and some machinery was in one spot of the canyon. 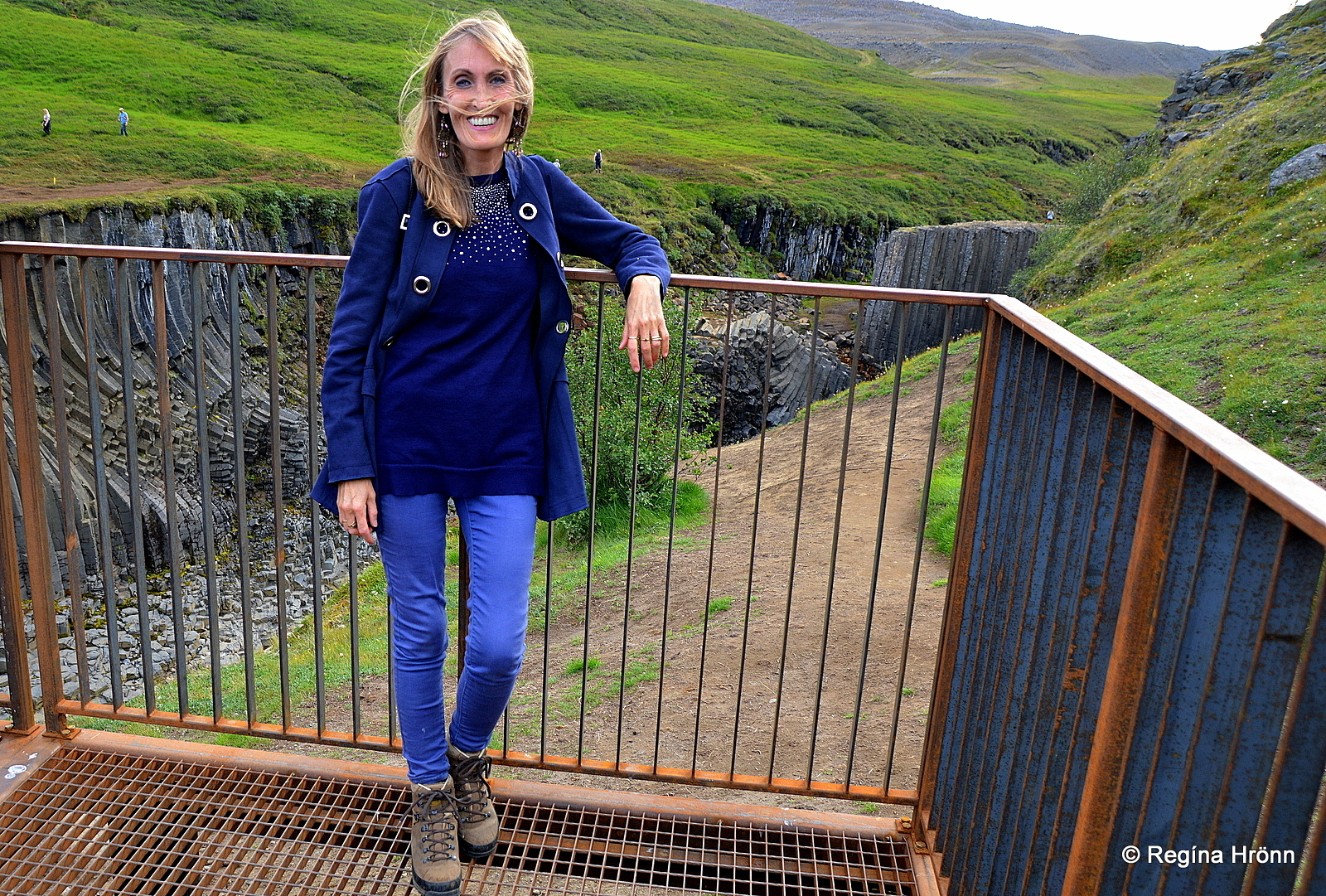 This is an excellent solution and made the descent a whole lot easier. On my second visit to Stuðlagil, I used the stairs to see what the view from the observation platform is like.

The view is good enough, but some trees block a part of the canyon. You can see the view in my photo above. 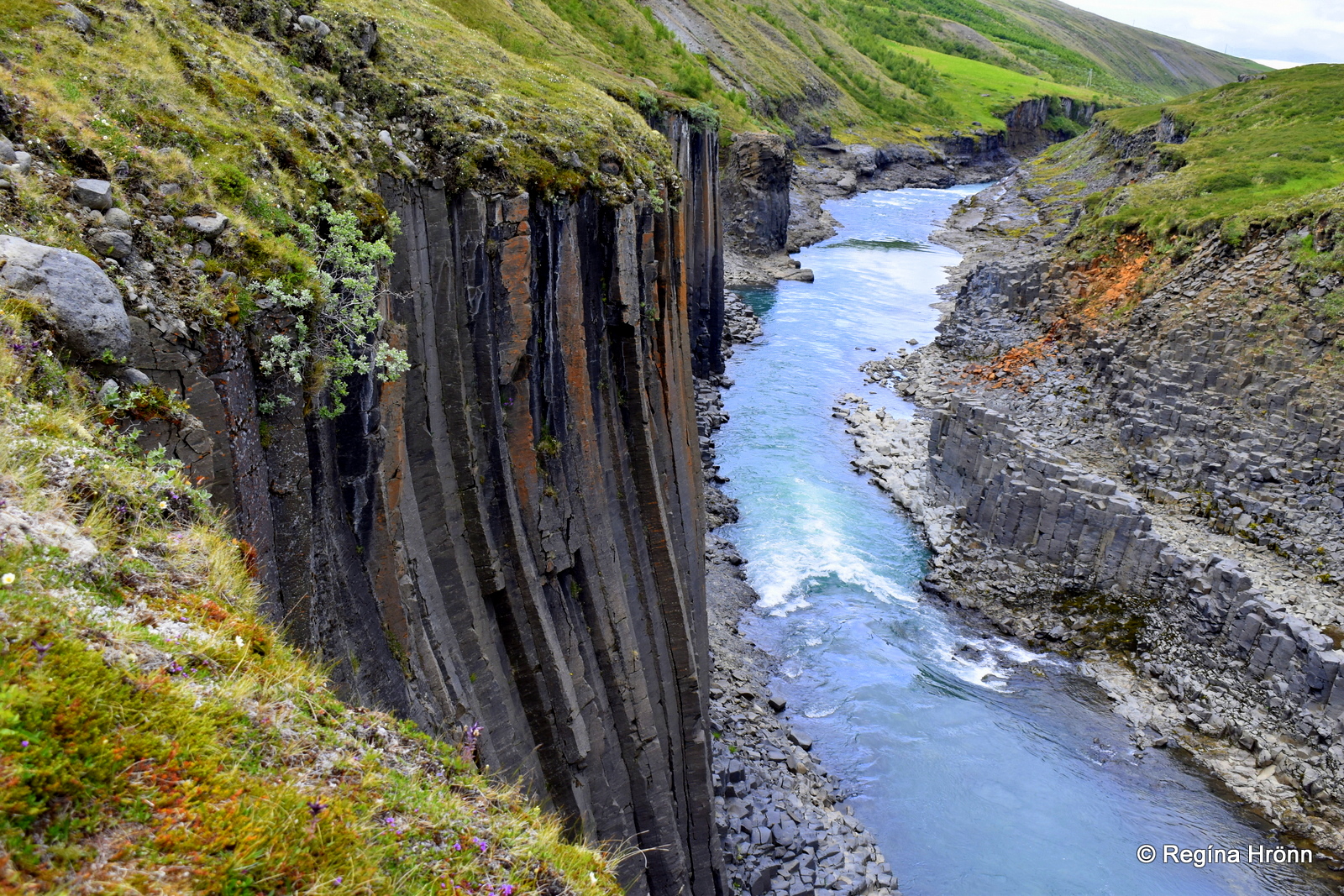 You can still visit the canyon via the steep path, but the stairs are safer. Just remember to sanitize your hands after touching the stairs as a lot of people are visiting Stuðlagil canyon now.

The descent via the steep gravel path into Stuðlagil is nothing major, pretty steep though, and I found it more difficult ascending than descending. 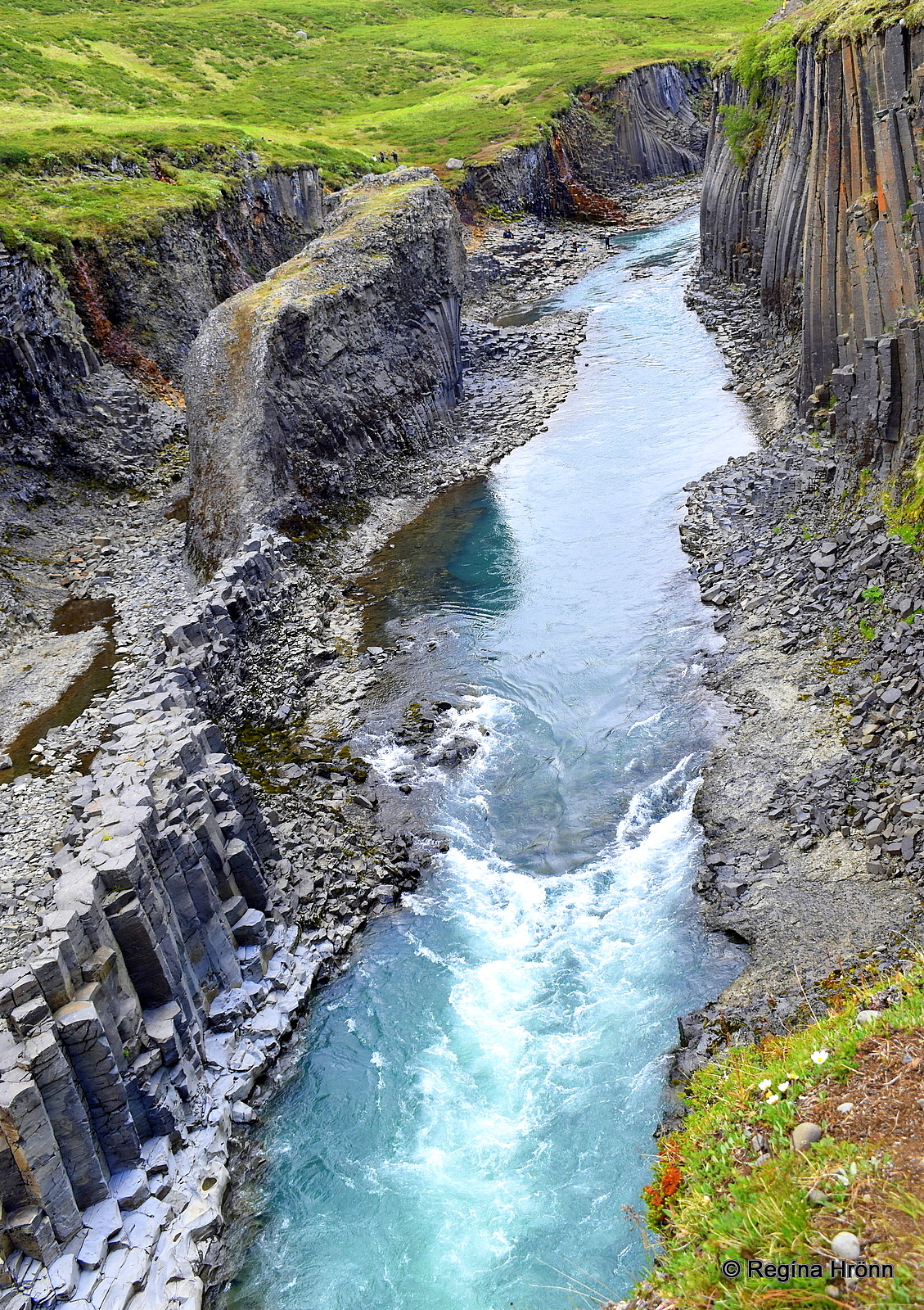 Once down as far inside Stuðlagil as is possible on this side of the river, I was amazed at the multitude and beauty of the basalt columns.

They take on all kinds of forms in the canyon and are both vertical and horizontal. 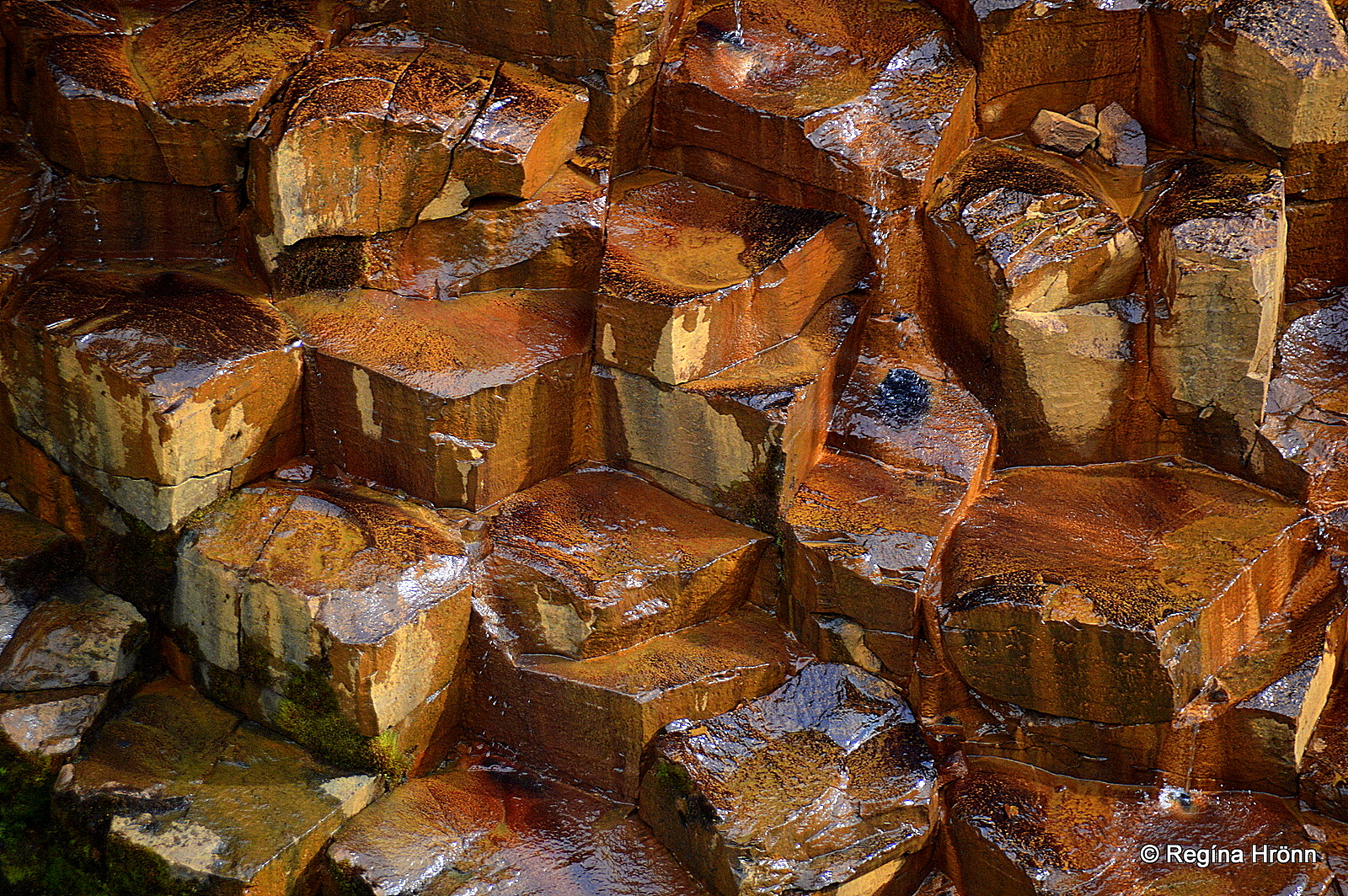 The most popular photo is taken by the russet-colored basalt columns on the other side of the canyon, which you can see in my first and third photos.

I was quite happy with the view I had from my side of the canyon. But I will for sure visit the canyon from the other side also one day.

I zoomed in on the russet-colored “steps” on the other side of the canyon and they look like a work of art – nature at its best, in my opinion. 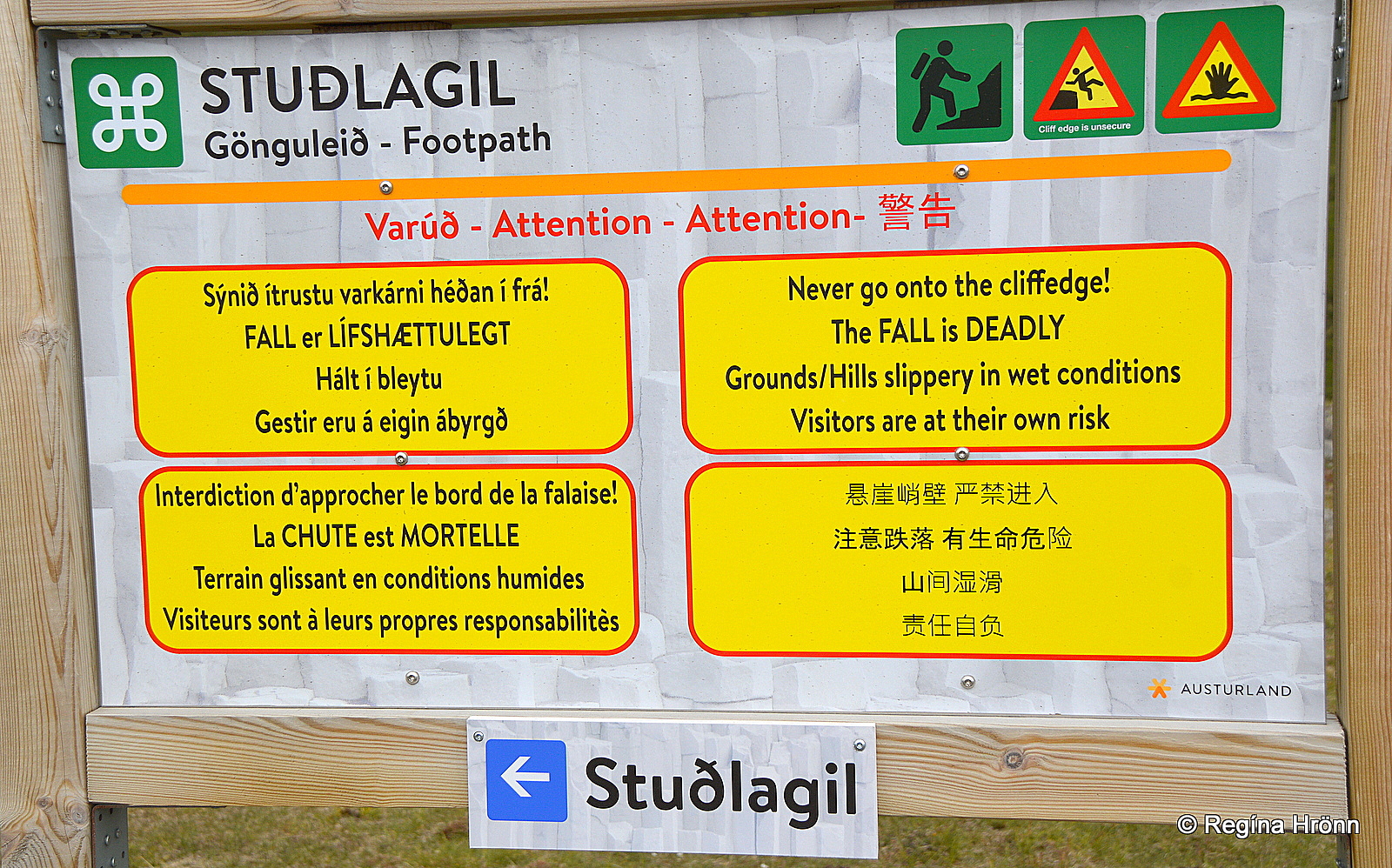 The information sign by the parking lot at Grund

Be careful while taking photos and the signs warn us that the fall into the canyon is deadly and that we are here at our own risk.

When we ascended the sun started shining, so this is what Stuðlagil looks like from above from the steep path. My husband took this photo below.

I was not about to turn around while climbing uphill to take a photo with my heavy camera. Not with my shaky balance 😉

And I must confess that I was a bit out of breath on the way up the steep hill again. 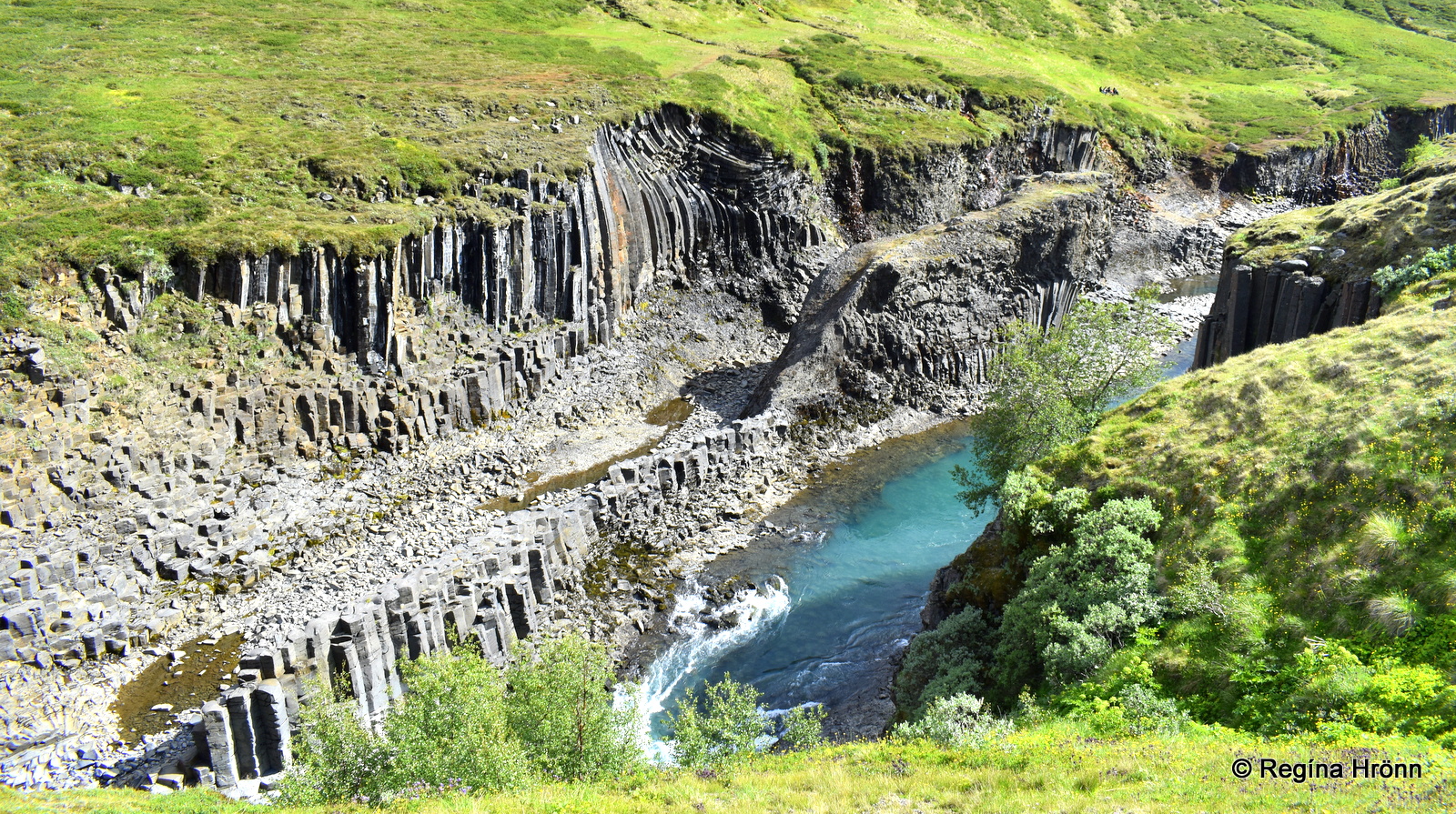 I would not have wanted to miss visiting Stuðlagil, even though I was struggling a bit during my visit. It is an absolutely breathtaking canyon.

Note that by the Grund farm and inside the canyon is the breeding ground for heiðagæs – the pink-footed geese, so from May 1st until June 10th, visitors are asked not to disturb their breeding ground, and always to stay on the paths.

The Jökuldalsvegur road no 923 leading to Stuðlagil is a gravel road, high up above the valley.

To visit it from the northern side like I did you drive for approximately 18 km on the gravel road. 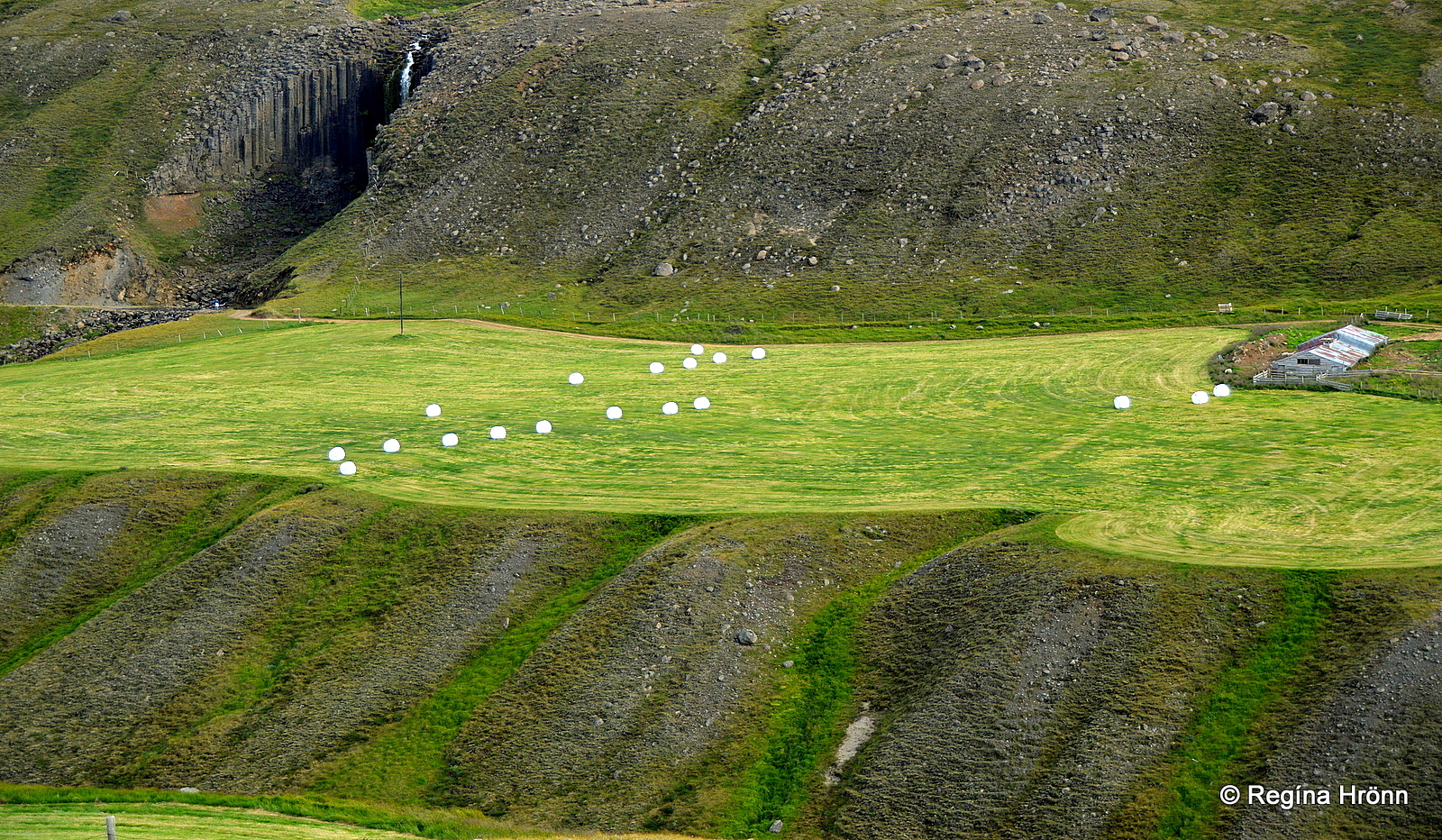 The other side of the river, Stuðlafoss in the upper left corner

To visit Stuðlagil canyon from the southern side you drive for approximately 14 km and turn by the sign Klaustursel, and leave your car in a parking lot by the Hákonarstaðabrú bridge.

The hike to the most beautiful part of the Stuðlagil canyon is 5 km, 10 km back and forth. From what I could see when looking over to the other side then the path is mostly even, just a long hike. 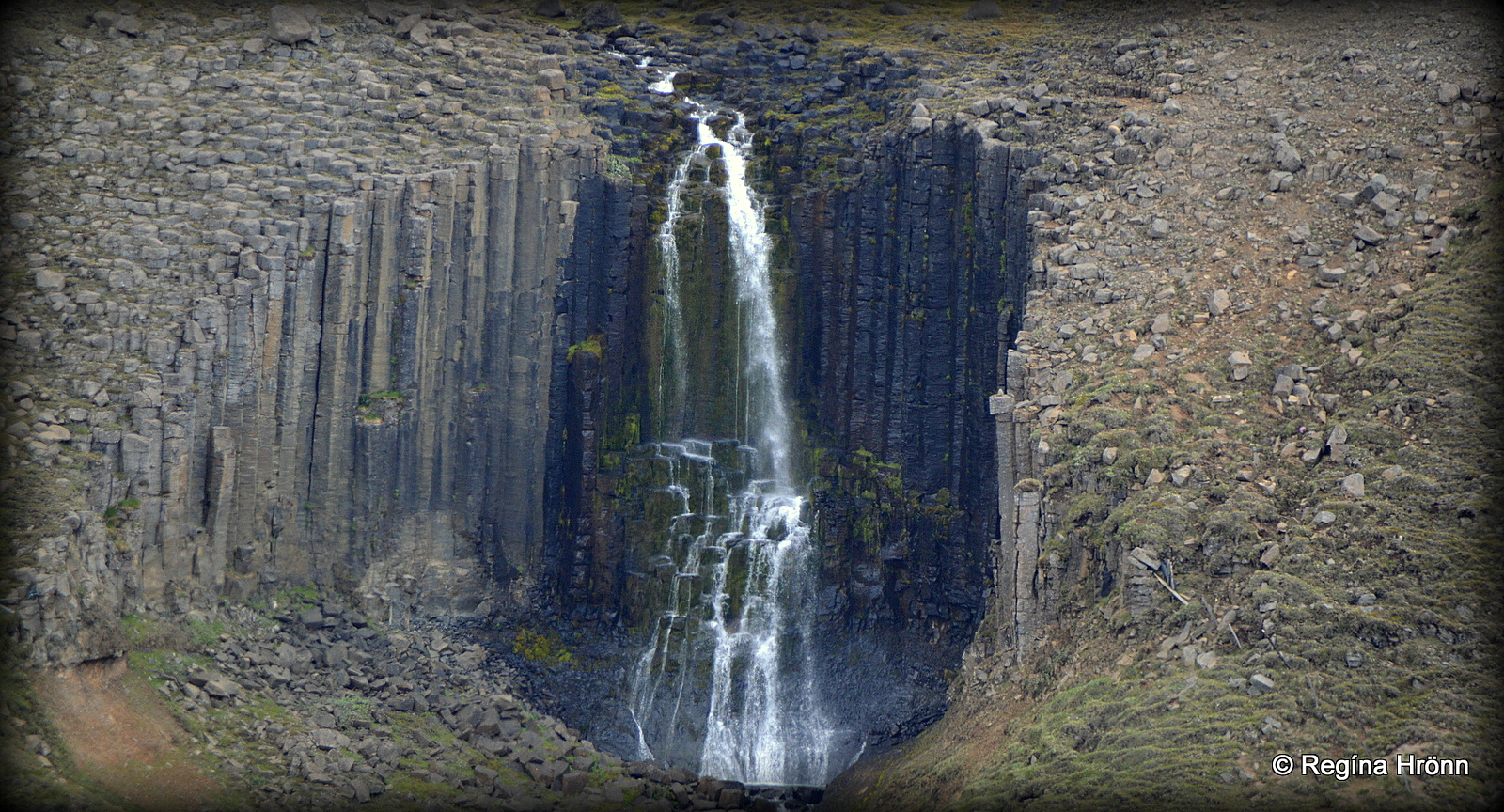 Some 2 km along the way you will see Stuðlafoss waterfall – the Basalt Columns Falls, which from afar looked ever so beautiful.

I zoomed in on it from the road on the other side of the canyon.

There is another waterfall not far away with a similar name, Stuðlabergsfoss, better known as Litlanesfoss waterfall. 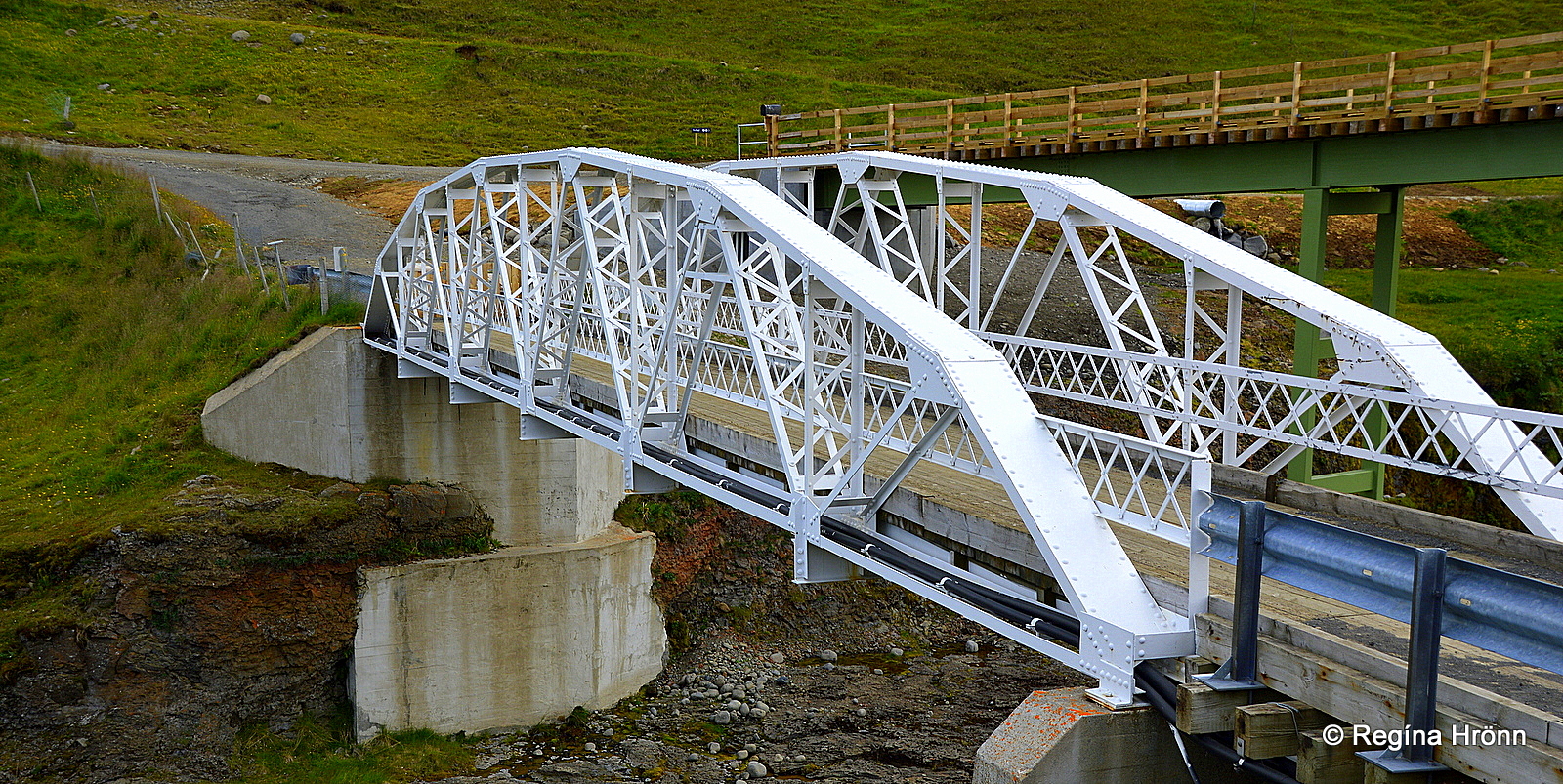 The bridges over the river Jökulsá á Brú

The white bridge over the river Jökulsá á Brú, Hákonarstaðabrú, came ready-made from the USA and was erected in 1908.

It is the oldest steel bridge in Eastern Iceland still in use. On its 100th anniversary, the Road Administration of Iceland renovated it.

A new bridge has now been built beside it.

Now, let me show you what happens in Stuðlagil in late August and September. 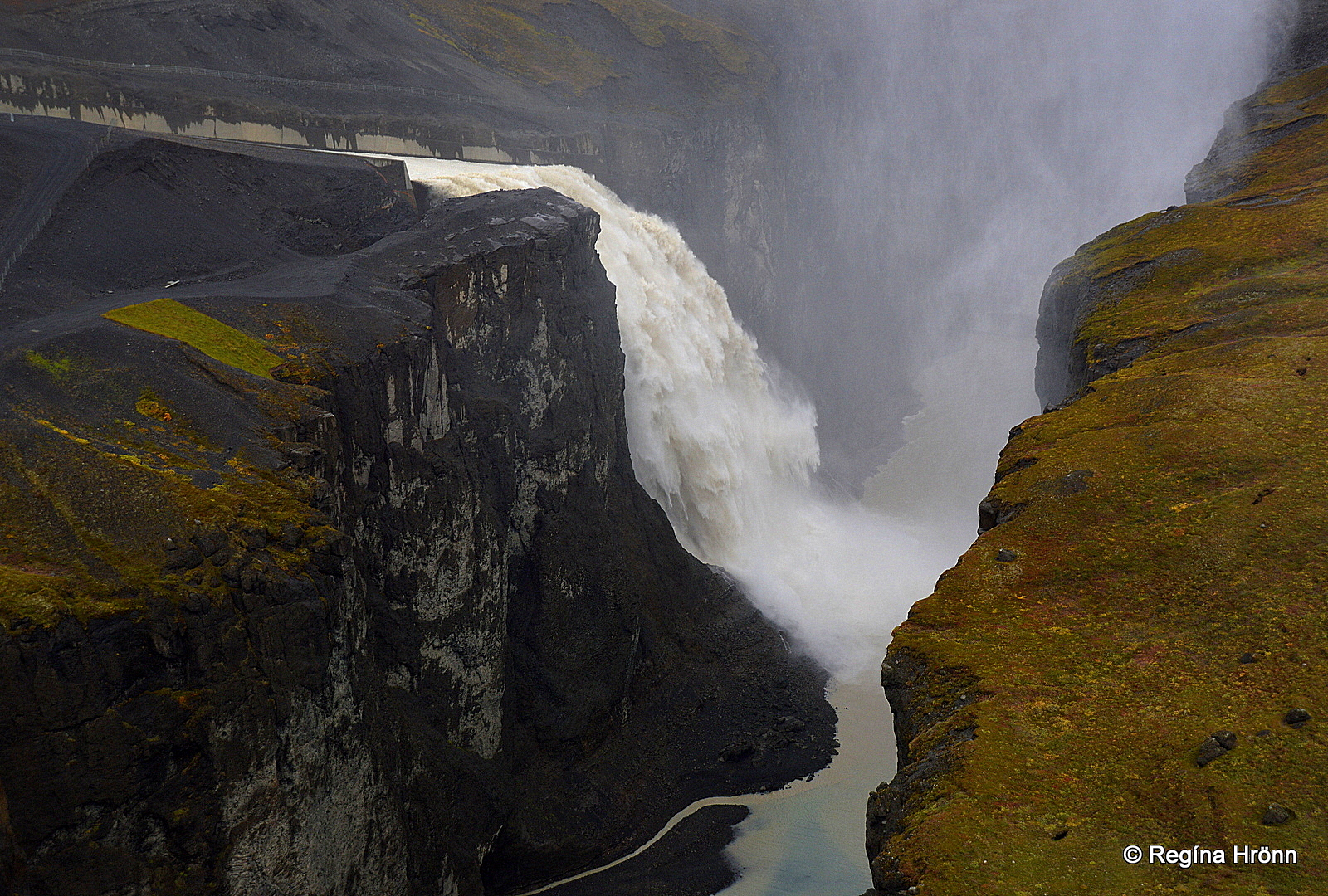 The man-made waterfall Hverfandi appears when there is an overflow in Hálslón dam at Kárahnjúkavirkjun hydroelectric power plant, thus changing the water levels of Stuðlagil canyon and the color of the river.

The name of the waterfall “Hverfandi” means Disappearing as it comes and goes depending on the water level of Hálslón.

I visited Káranhnjúkavirkjun in September to have a look at the waterfall. It can be seen from late August and September.

Hverfandi in all its force is more powerful than Dettifoss, Iceland’s most powerful waterfall. 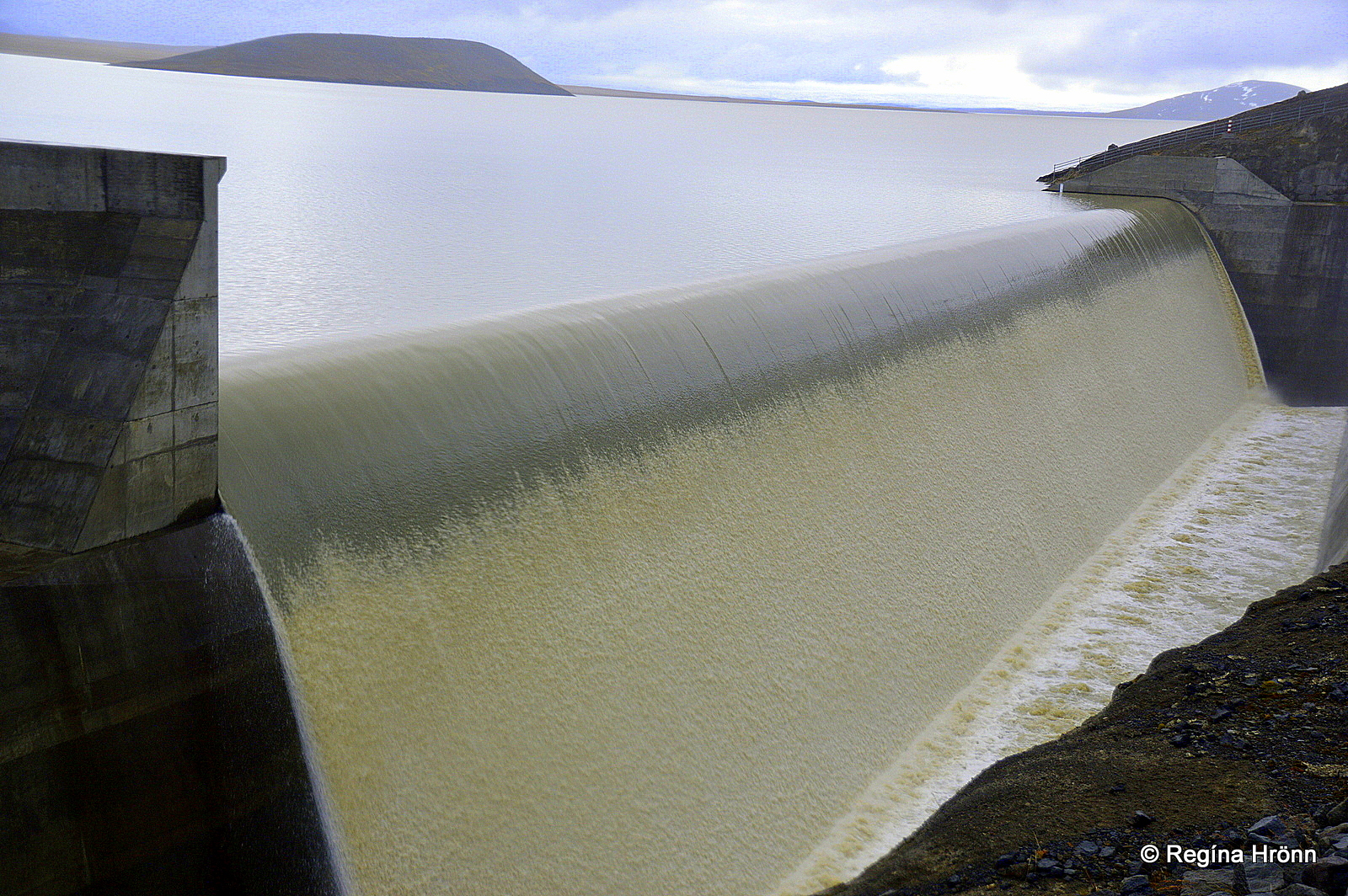 The overflow falls into a chute that directs the glacial water into the Hafrahvammagljúfur canyon, where it creates the man-made waterfall Hverfandi which cascades 90-100 meters into the canyon.

It then flows through the canyon with great force and changes the appearance of the Stuðlagil canyon. 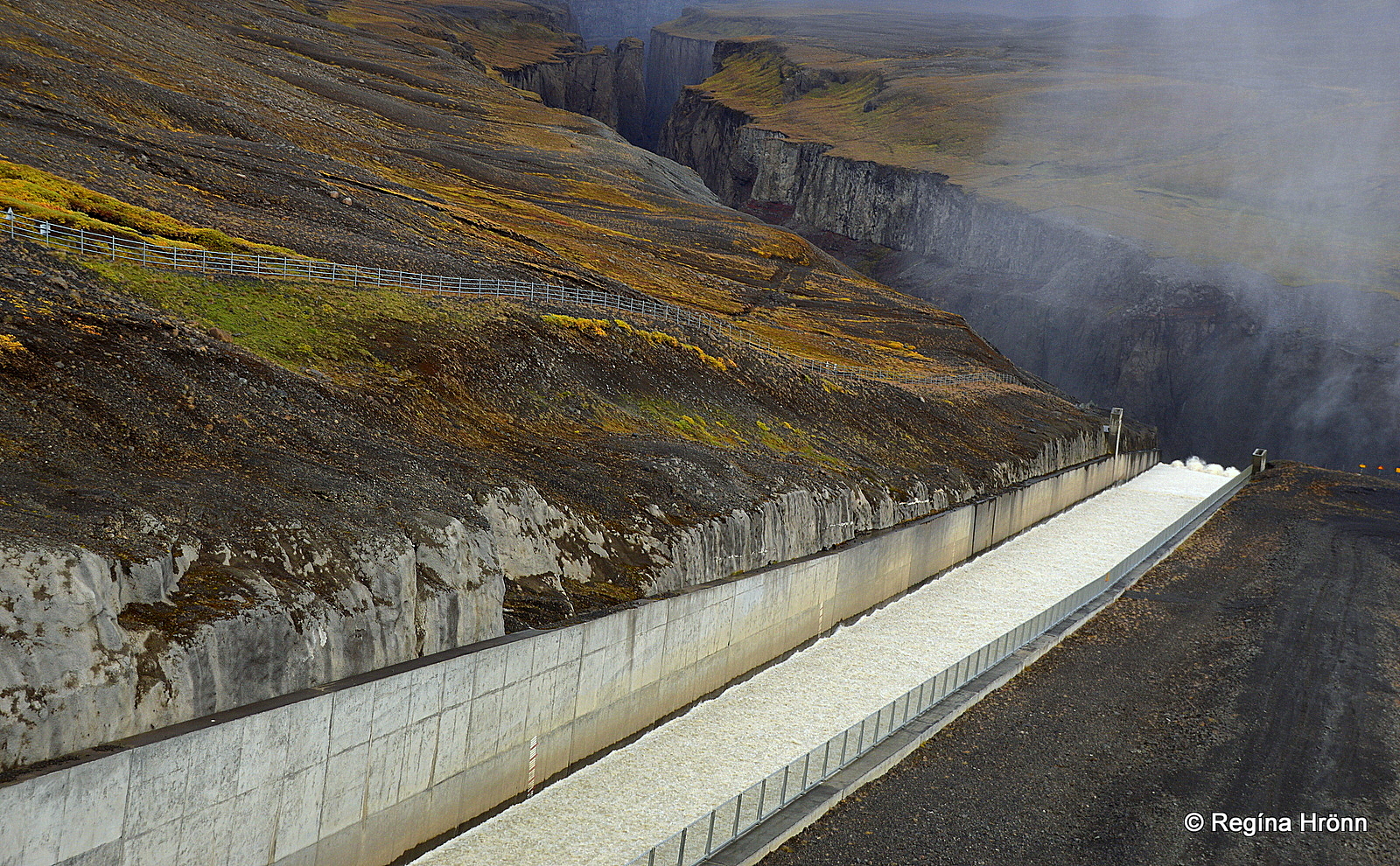 The chute directs the overflow into the canyon

Instead of a turquoise river flowing peacefully in Stuðlagil canyon, there is a roaring brown glacial river running through it.

Take that into account when you plan your Iceland visit that during that time of the year Stuðlagil will be quite different from what to expect in the summertime.

It would be disappointing coming this long way to see a beautiful turquoise river only to be greeted by a roaring brown glacial river coming straight from the largest glacial tongue of the largest glacier in Europe, the mighty Vatnajökull.