In Iceland, you will find many pearls of nature, but the Jewel in the Crown of Iceland will, in my opinion, always be the magnificent Jökulsárlón glacial lagoon in SE-Iceland. 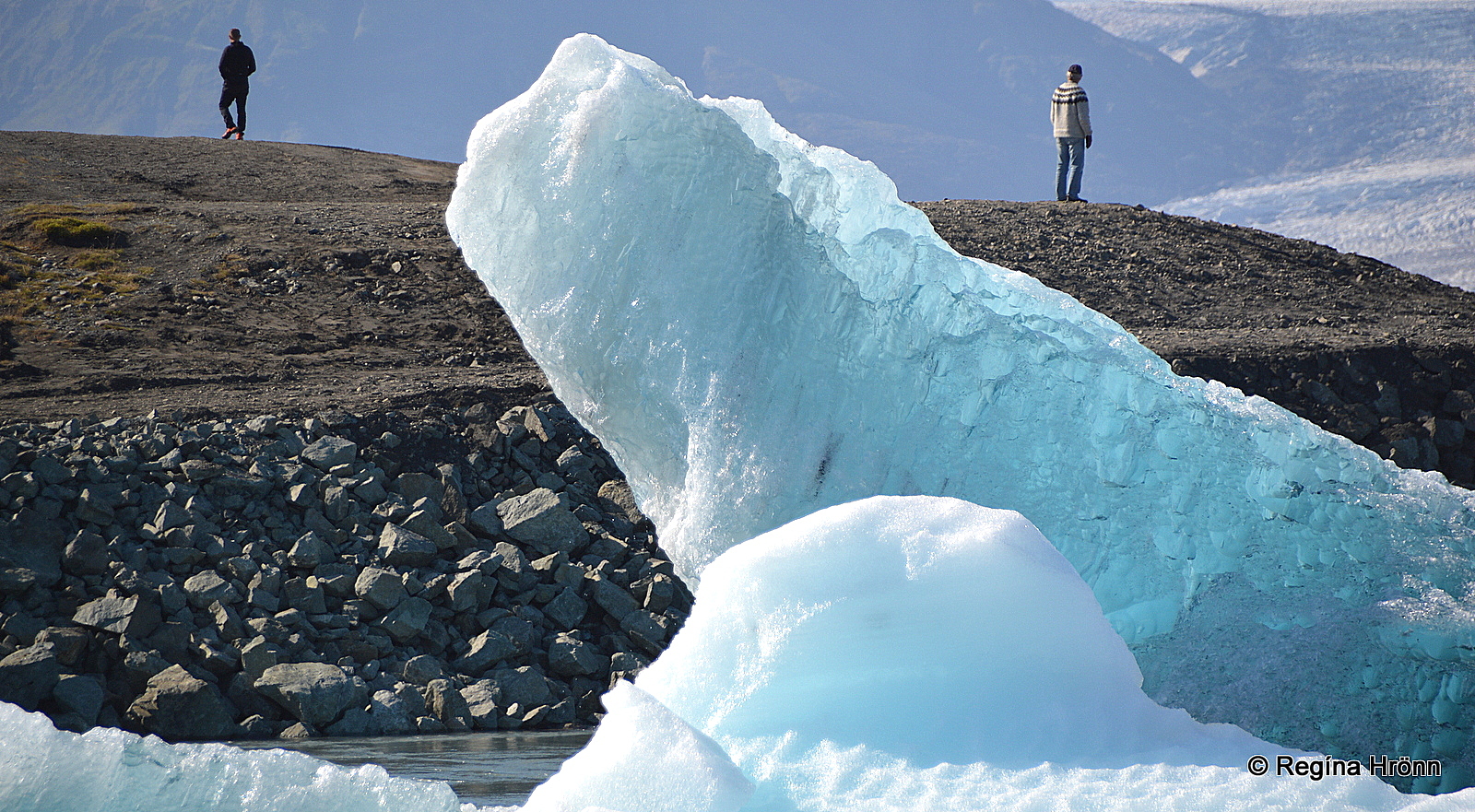 Blue icebergs on the glacial lagoon

The icebergs on the lagoon change constantly so each visit to the lagoon is unique. 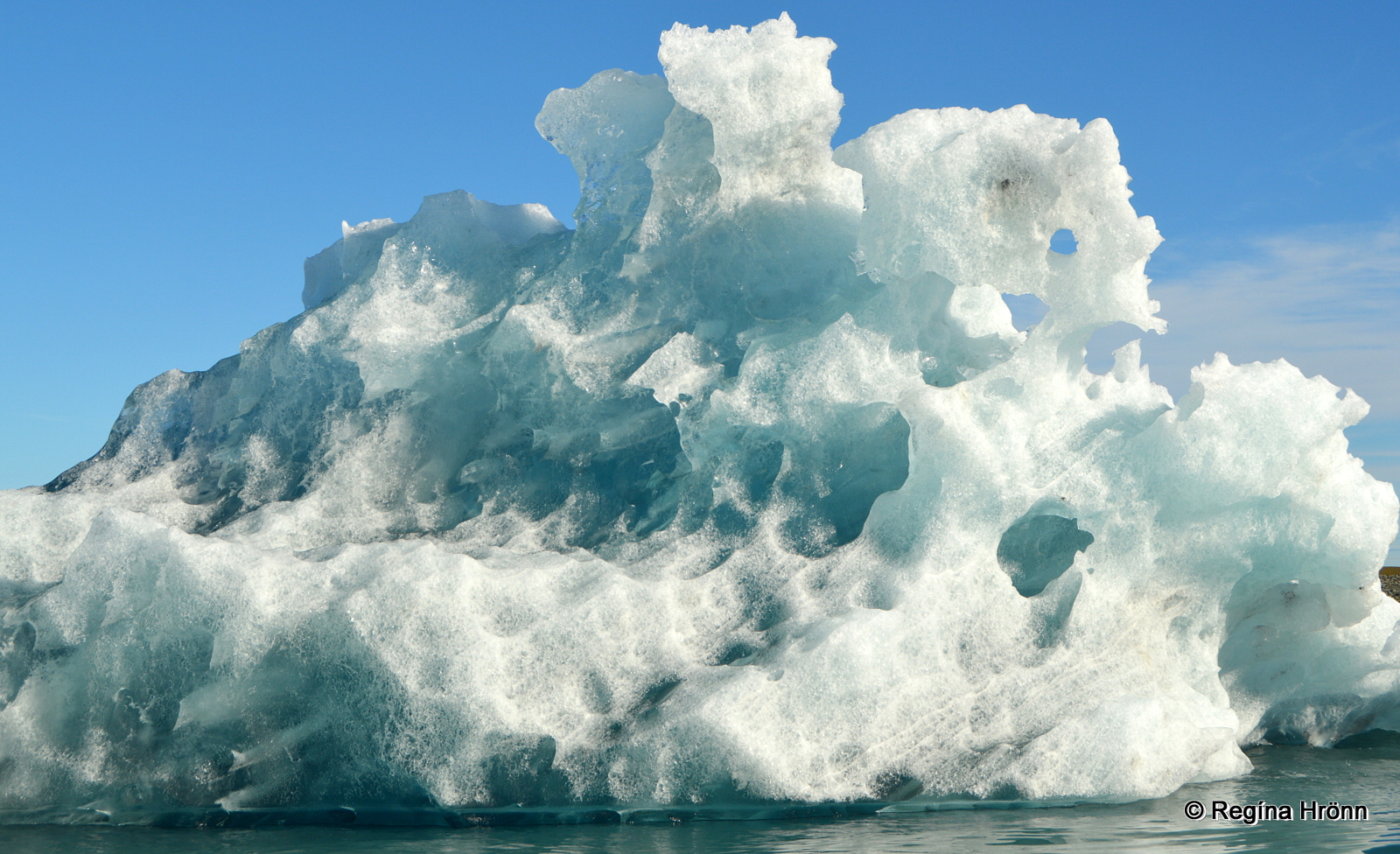 The icebergs are especially breathtaking when the sun is shining and they sparkle in the sunlight.

The glaciers are retreating and the Jökulsárlón glacial lagoon started forming in front of the Breiðamerkurjökull glacier in around 1934-1935.

Jökulsárlón glacial lagoon, which is a part of the Vatnajökulsþjóðgarður national park was bought by the Icelandic state back in 2017 and declared as protected.

Boat tours are available on the Jökulsárlón glacial lagoon and I have joined an amphibian boat tour on one occasion.

We were in luck as the sky was clear and the sun was shining, which amplified the colors of the icebergs. 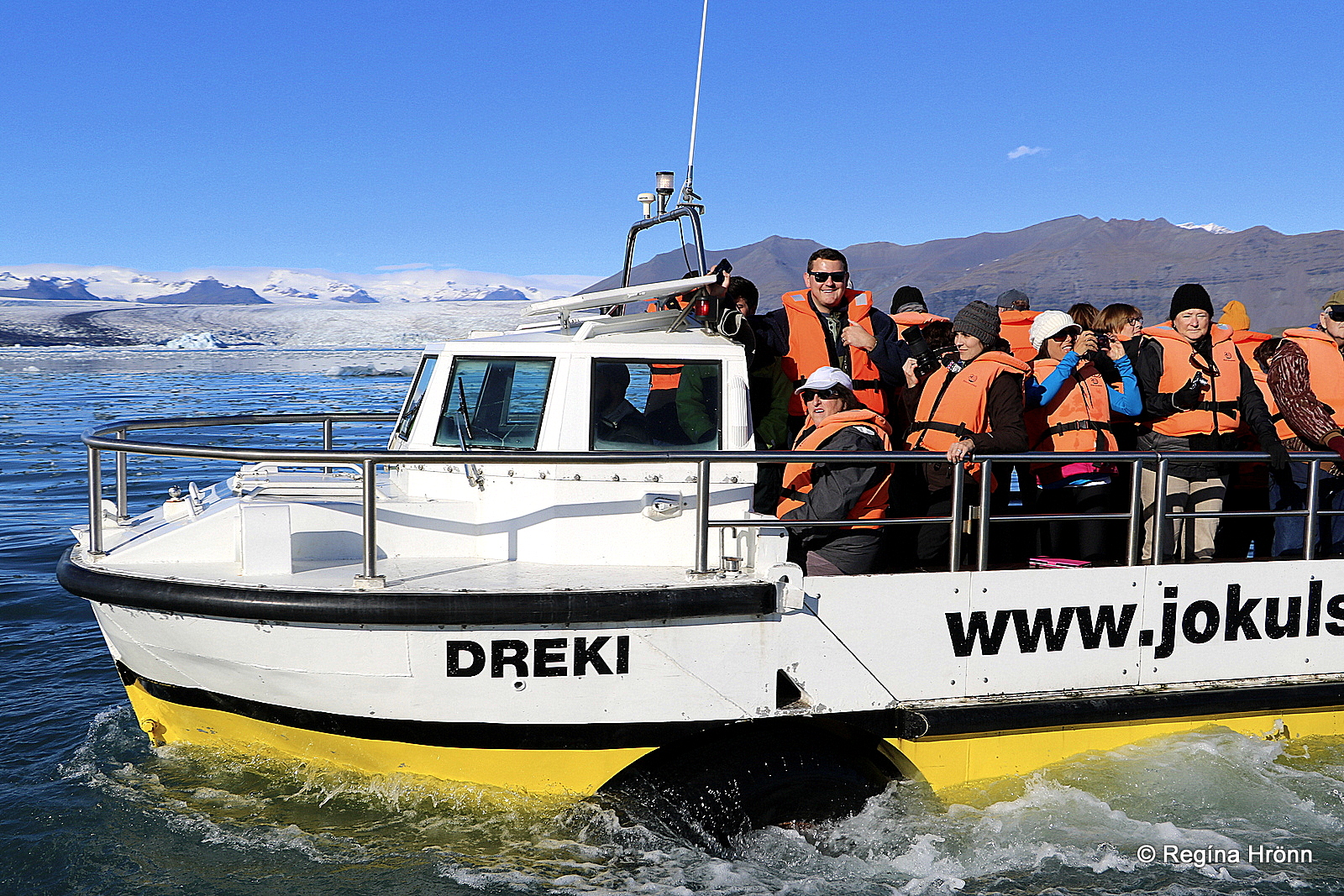 I would recommend a boat tour if you have got enough time to spare at the glacial lagoon.

Sailing amongst the huge icebergs is such a fantastic experience.

Being so close to the icebergs is surreal, especially when one considers the fact that only 1/10th of the iceberg is visible above the water level. 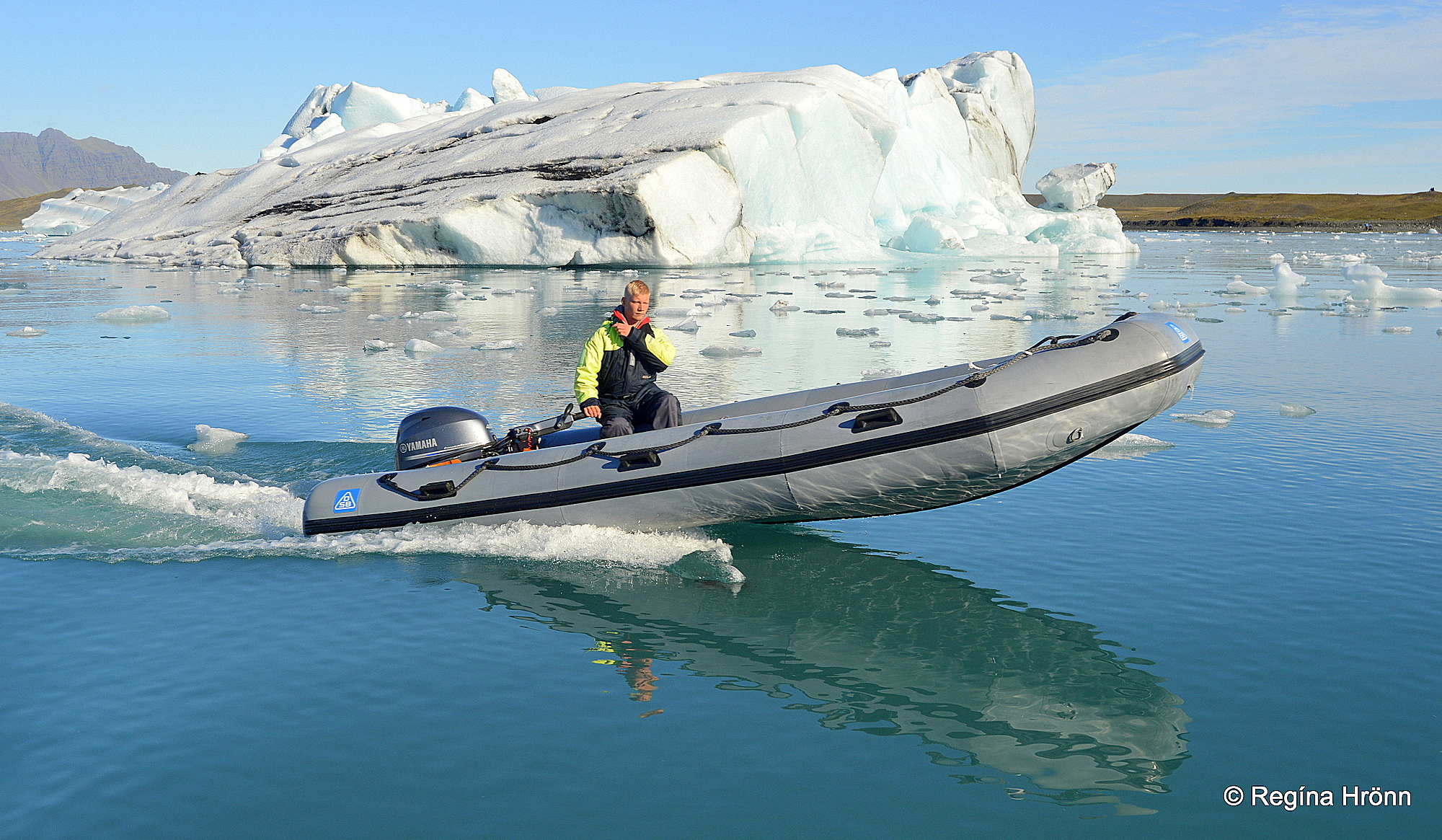 Sailing on the glacial lagoon

Jökulsá á Breiðamerkursandi glacial river, which runs from the glacial lagoon into the Atlantic ocean, is the shortest glacial river in Iceland.

That does not mean though that it is less dangerous than the other glacial rivers and it proved to be a great hindrance in this part of Iceland before it was bridged in 1967.

Jökulsárbrú bridge is 108 meters long and what a difference this one-lane bridge has made. 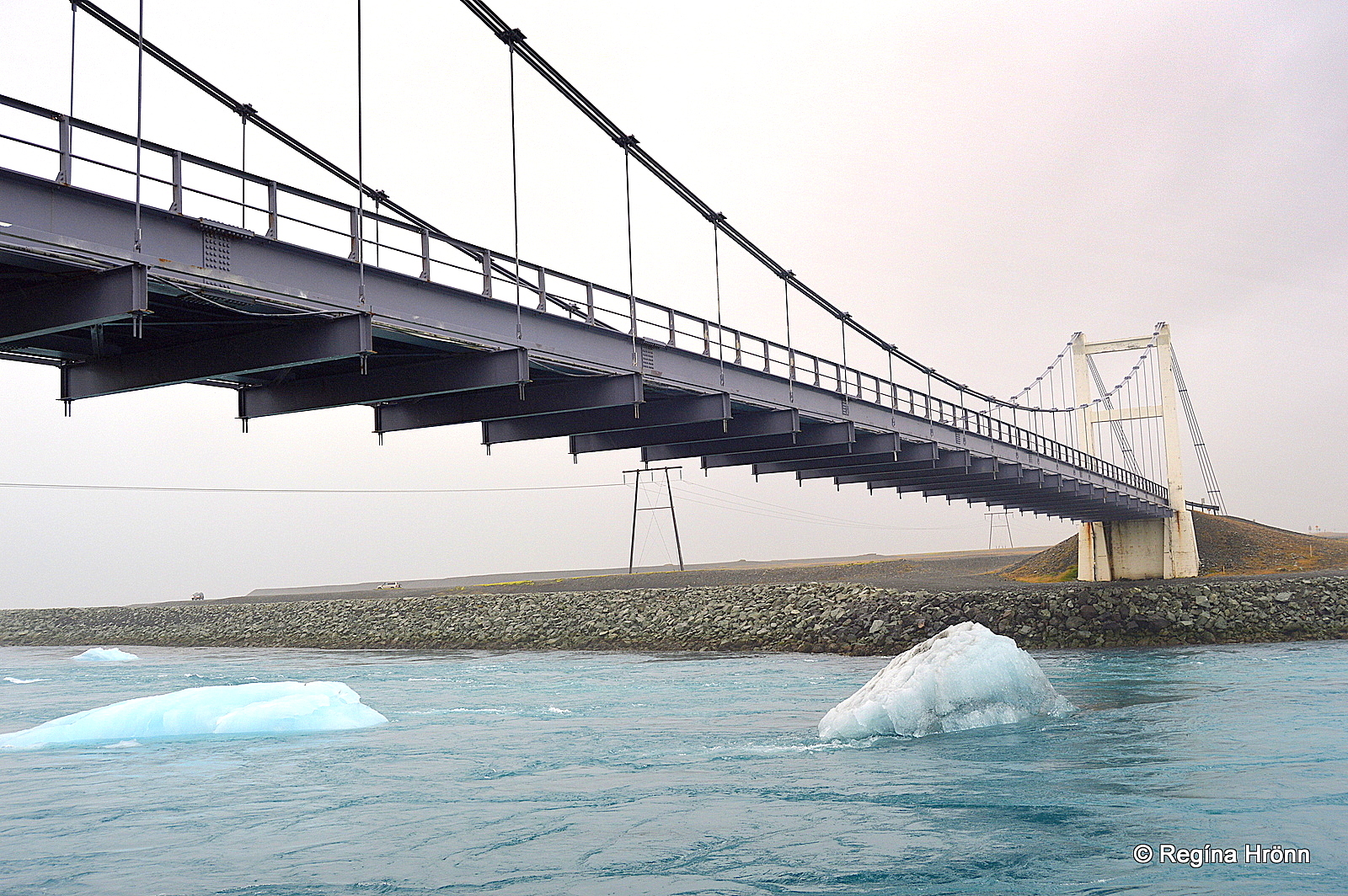 In the olden times, travellers in this area often tried to cross the glacial river on horseback, but at times it was impassable.

They then tried to cross over at the riverhead by the glacier, risking their lives between the crevasses in the glacier.

At times both people and horses lost their lives on the glacier and in the glacial river. 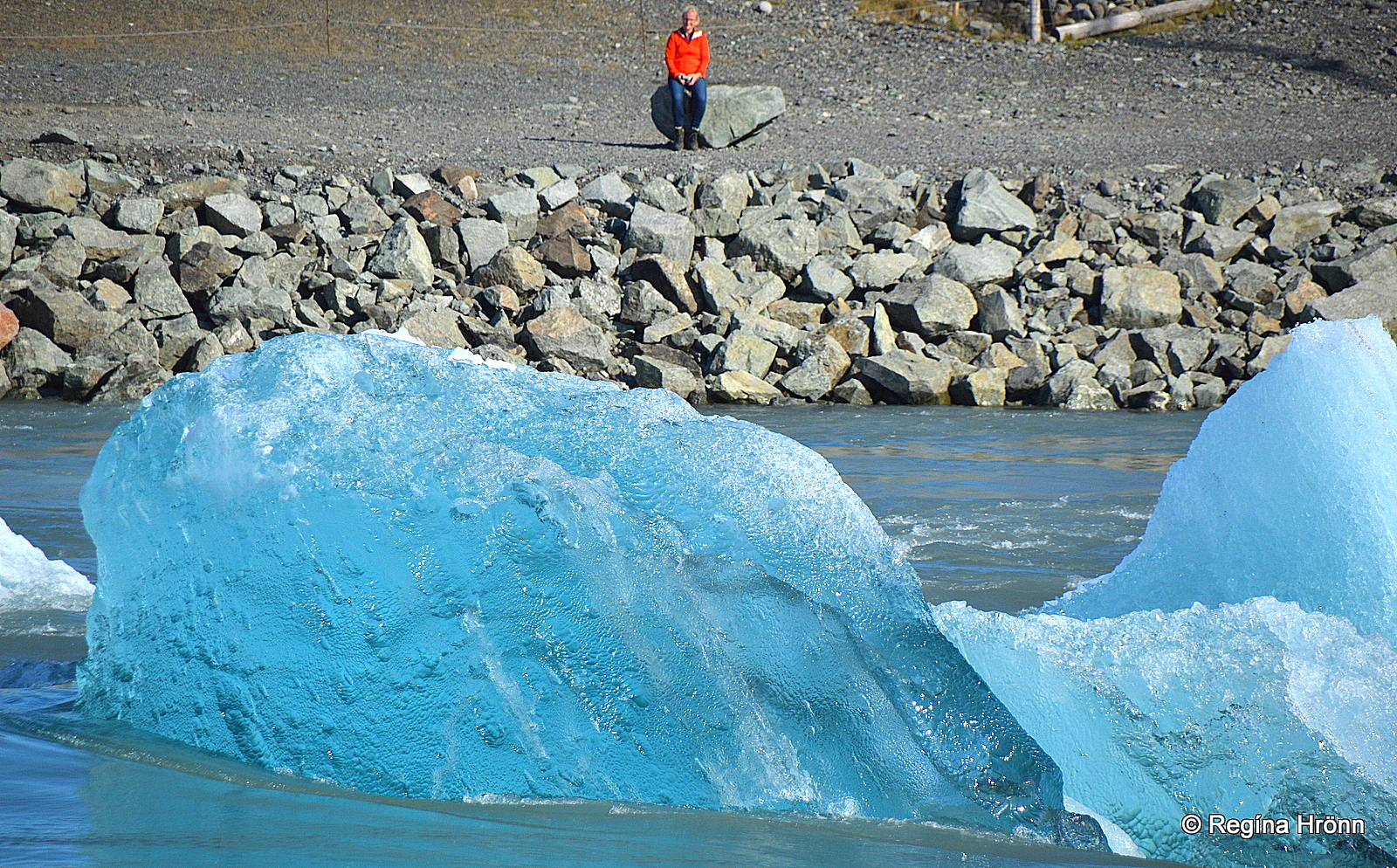 Blue ice floating down the river to the sea

I have read many stories about such dangerous journeys on the glacier when the locals were just trying to get from one location in Iceland to another.

And just imagine what a difficult job it was for the postman bringing mail to people on the other side of the glacial river.

Later on, a ferry was used to transport people over to the other side. 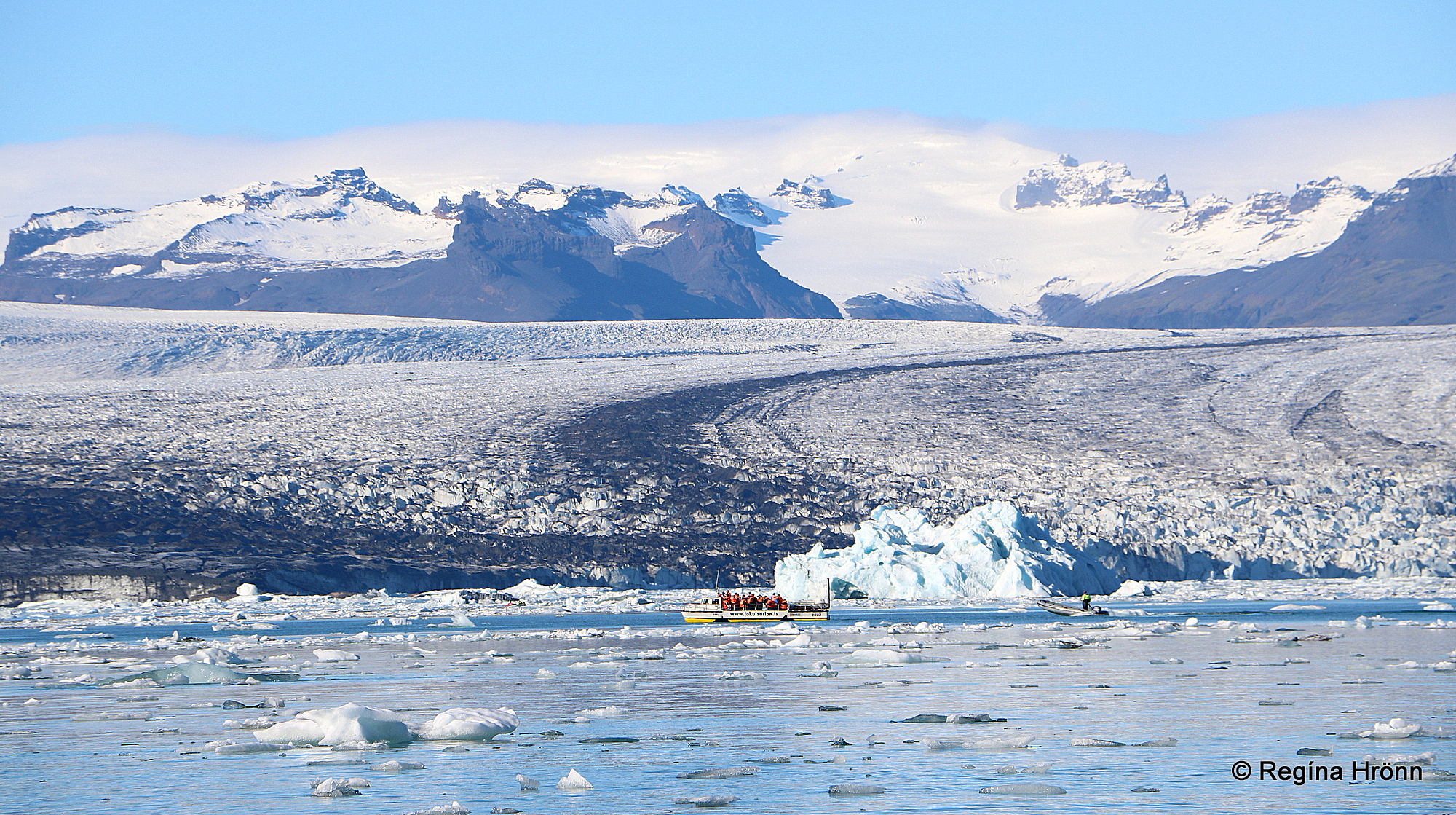 Breiðamerkurjökull glacier is filled with crevasses

The landscape has changed considerably in this location since the settlers of Iceland arrived in 874 (give or take a few years).

The glacier was much smaller back then and farms were built in this area. Which then got destroyed when the climate changed and it got colder.

The glacier increased in volume and advanced until it was only approximately 1 km away from the sea. And the river ran straight from the glacier tongue into the sea. 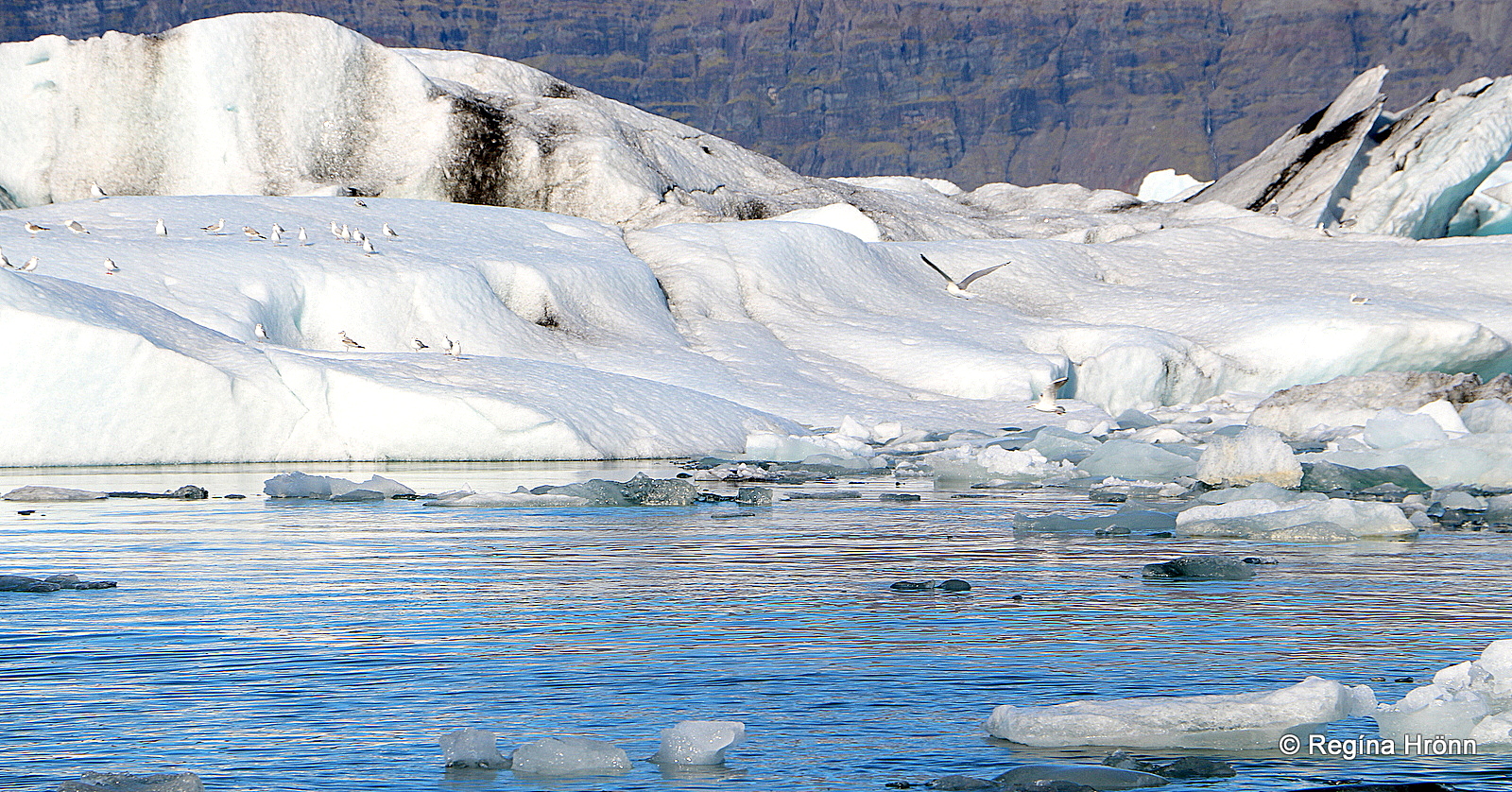 The glacier then started retreating (although at one point it advanced again) and the glacial lagoon started appearing in 1934-1935 as I mentioned earlier.

Now the Breiðamerkurjökull glacier is several km away from the shoreline.

But not only the glacier but also the shoreline is retreating and the tide comes into the lagoon which in turn speeds up the melting process. 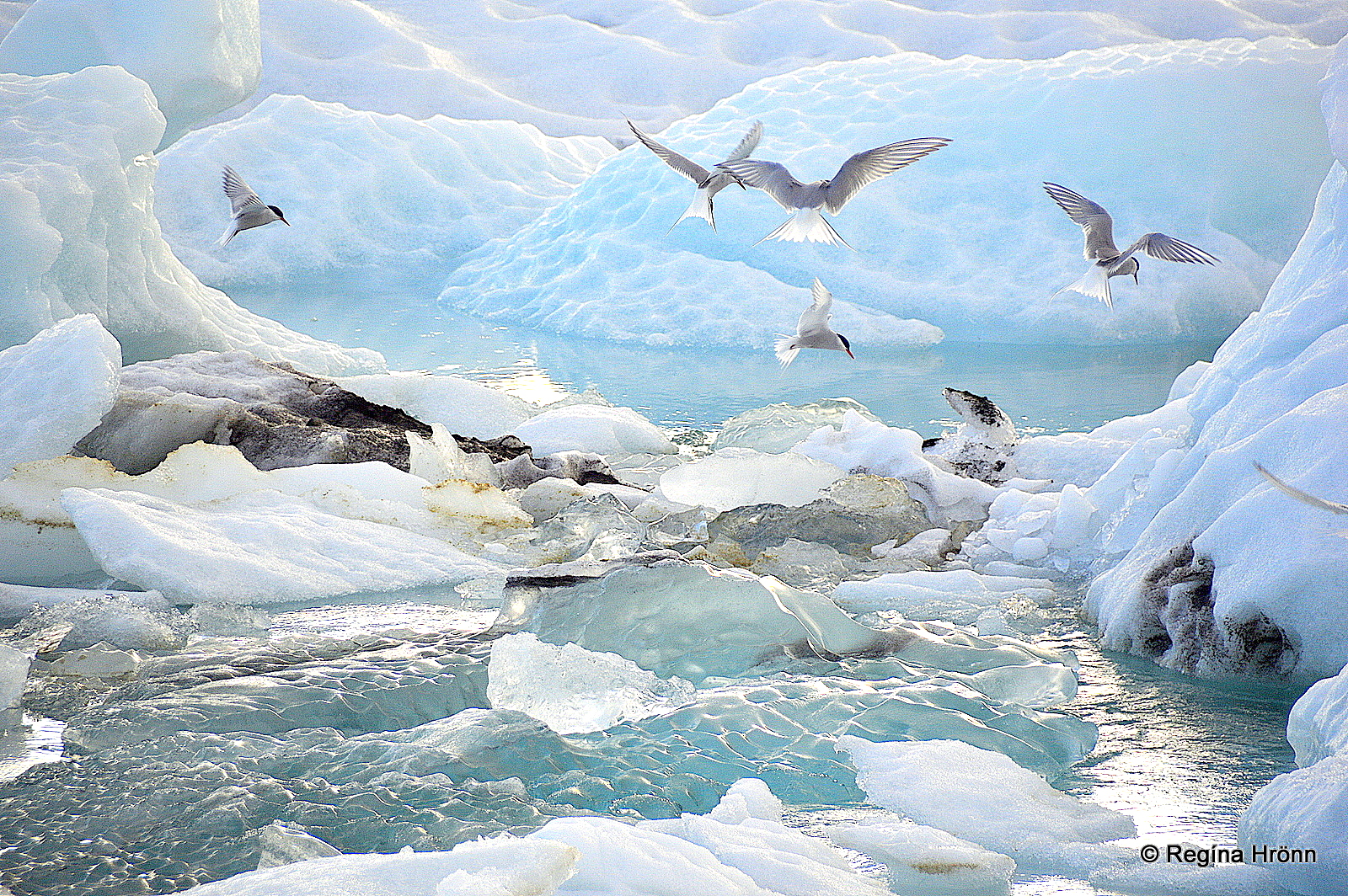 The Arctic tern looking for fish in between the icebergs

This also means that the Jökulsárlón glacial lagoon is the liveliest glacial lagoon I have seen in Iceland as fish drifts with the tide into the lagoon.

Here you will see seals in abundance and seabirds, which follow the fish.

While at other glacial lagoons it can get almost eerily quiet, or until the glacier calves with a large overwhelming crack. 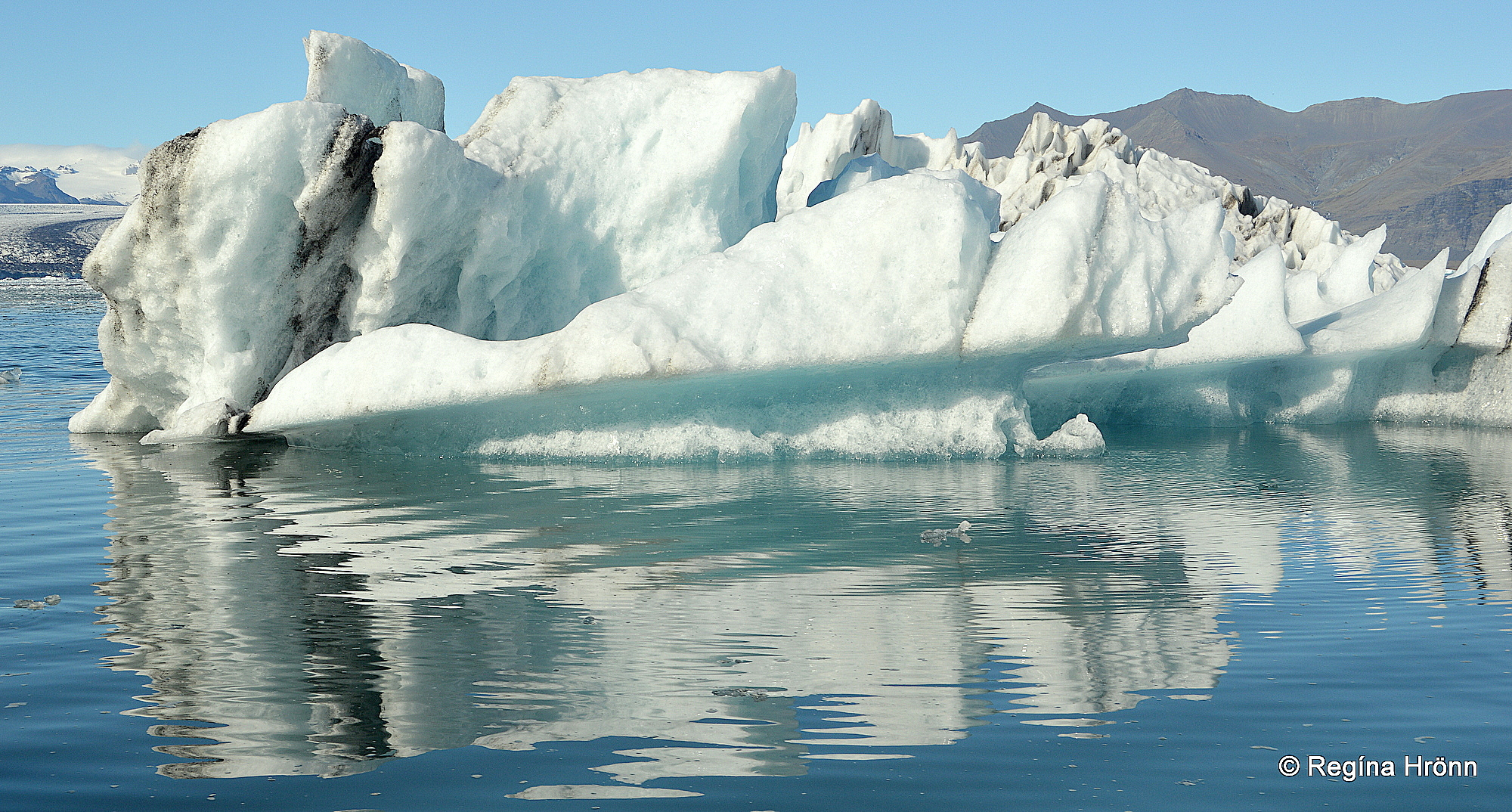 Icebergs on the lagoon

I witnessed it once while visiting the close by Fjallsjökull glacier, which is another icefall in the Vatnajökull glacier.

A huge piece broke from the glacier and fell into the Fjallsárlón glacial lagoon. It made me feel very small facing such great forces of nature.

I took a photo of the Fjallsjökull glacier moments after it had calved, and you can see the blue ice which marks the location of the huge icebergs which calved from the glacier. 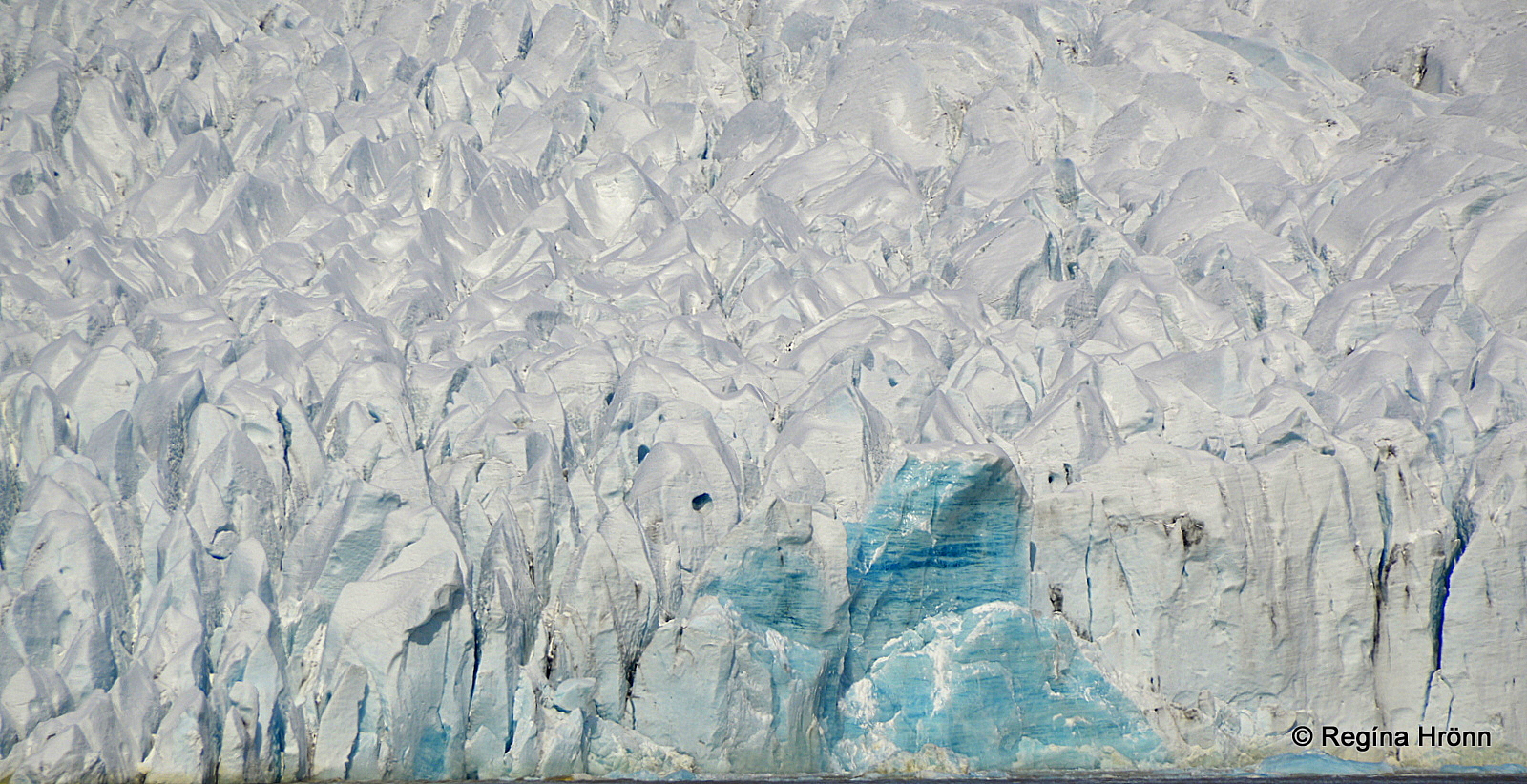 I have visited the Jökulsárlón glacial lagoon in the spring, the summertime, autumn, and the wintertime.

Each season has got its charm and in the wintertime, you might see the Northern lights at the Jökulsárlón glacial lagoon.

Visiting the glacial lagoon is always a unique experience as you can see in the video below, which I took on a very cold November day with limited daylight.

The icebergs were frozen together and the ice had a very special blue color. The clear ice looked like jewelry.

There were very few people at the lagoon. The weather was completely still and so were we as we felt like we had entered a holy place.

I especially like the blu color of the ice. When the icebergs capsize the sparkling ice becomes visible.

I have shown you the ice caves in Breiðamerkurjökull glacier in another travel-blog, where you can walk inside amazing blue ice caves.

The seasonal ice caves can be visited from November until the beginning of April and the departure point is at Jökulsárlón. 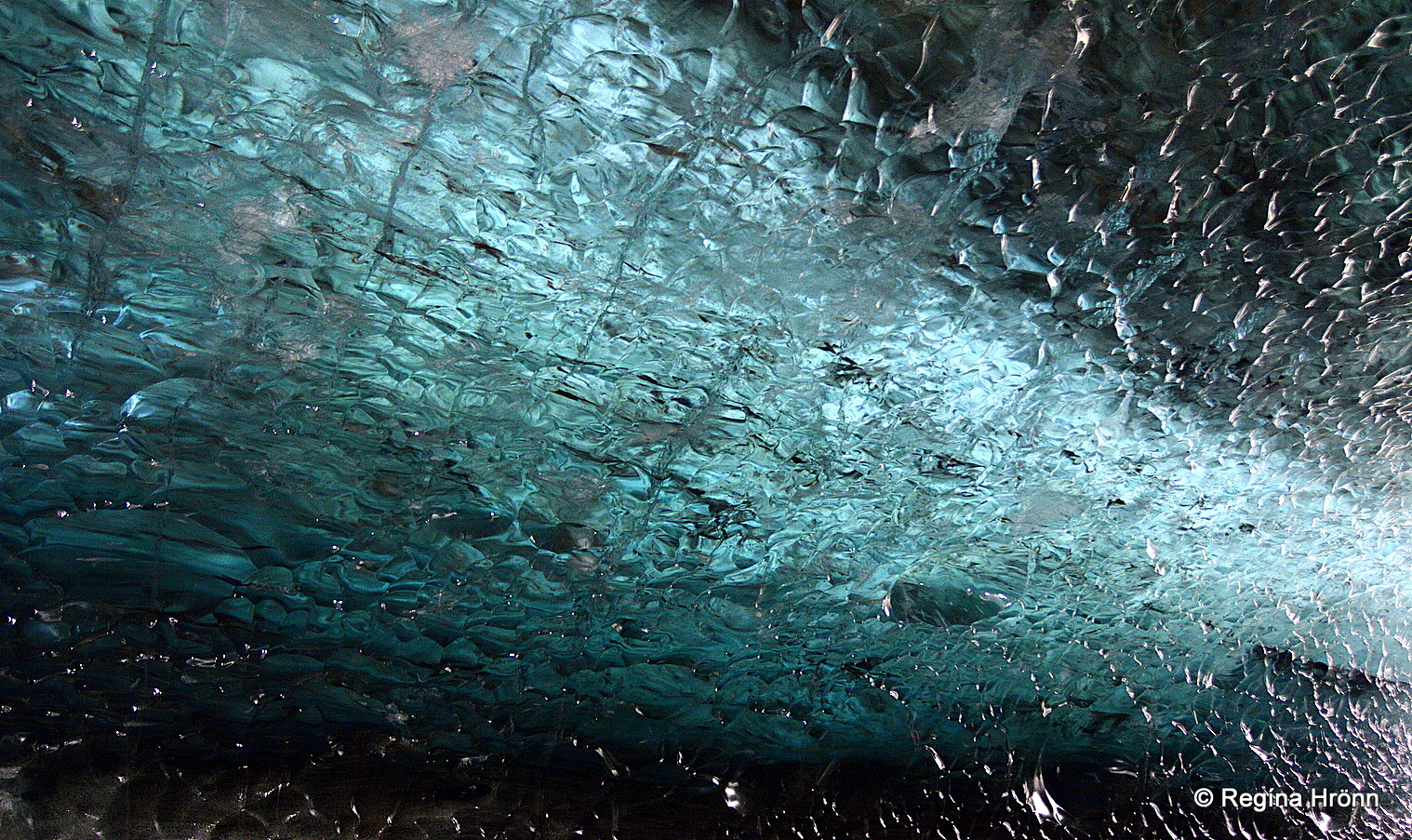 Blue ice inside an ice cave in Breiðamerkurjökull

Now let’s walk under the bridge by the glacial river and check out the glistening ice diamonds on Eystri-Fellsfjara as the east side of the river is called, also sometimes referred to as the Diamond Beach.

You can also drive and leave the car at the parking lot at Eystri-Fellsfjara and Vestri-Fellsfjara, which is the name of the west side of the river. 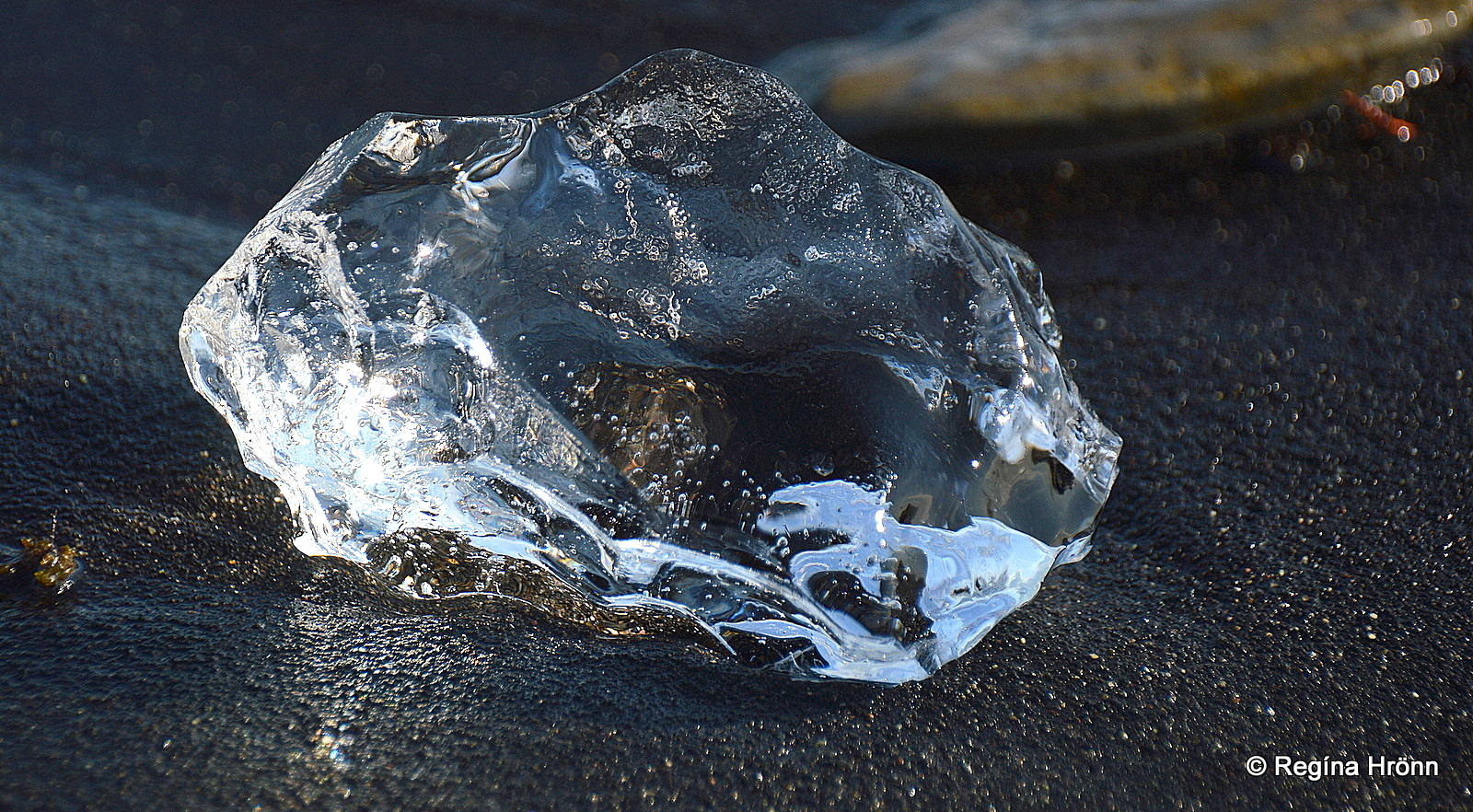 One of the most popular beaches in Iceland is the Ice Diamond Beach on Eystri- and Vestri-Fellsfjara, which is the topographical name of these beaches.

The icebergs which are floating on the glacial lagoon pass under the bridge and float for a short distance on the glacial river, Jökulsá á Breiðamerkursandi, on their way to the sea. 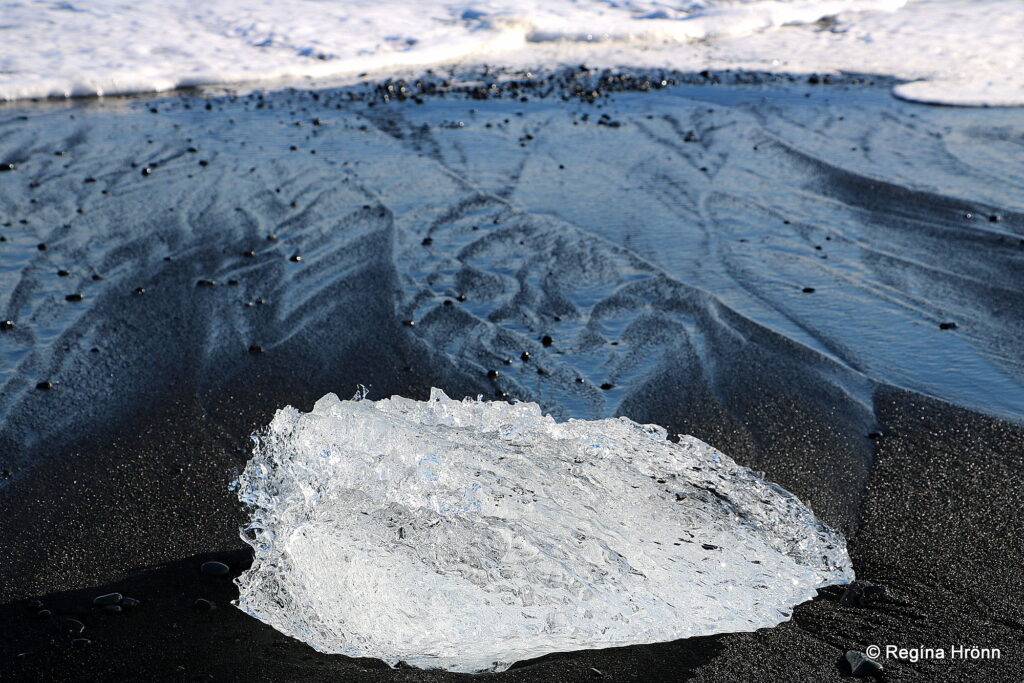 Some of the smaller pieces of the icebergs, which have been polished by the waves, are washed ashore again and decorate the black sand beach, where they shine like sparkling ice diamonds.

Visiting this beach is like visiting an art gallery that has always got new art on display.

I especially like the color combination in the photo above which I took on one of my visits to the beach. 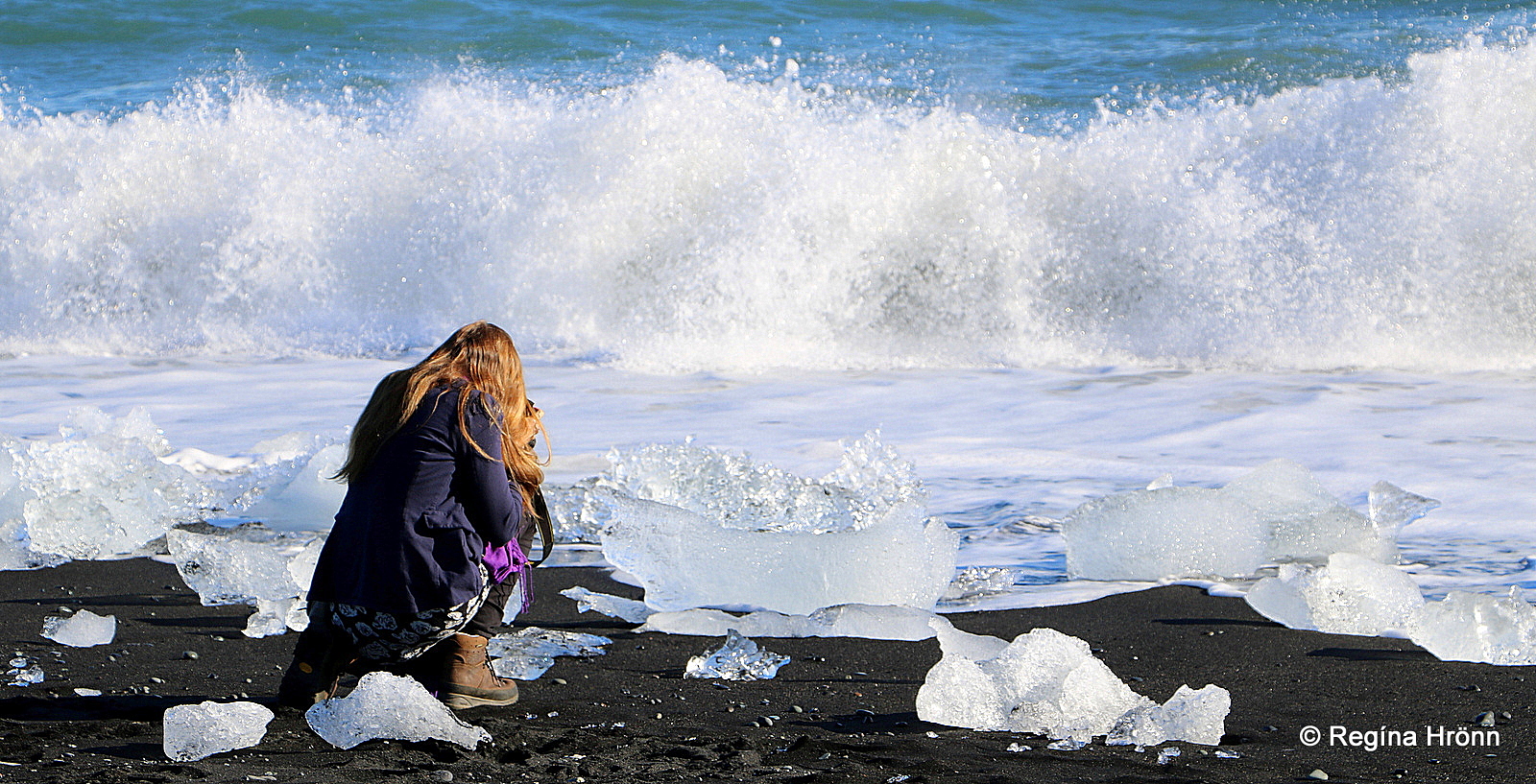 I always included a visit to the beach when I visited Jökulsárlón glacial lagoon and I loved checking out the sparkling ice chunks.

Back then very few people visited the beach, only a few photographers.

So we started calling this beach the Diamond Beach to see if we could attract visitors to include the beach in their visit to the Jökulsárlón glacier lagoon. 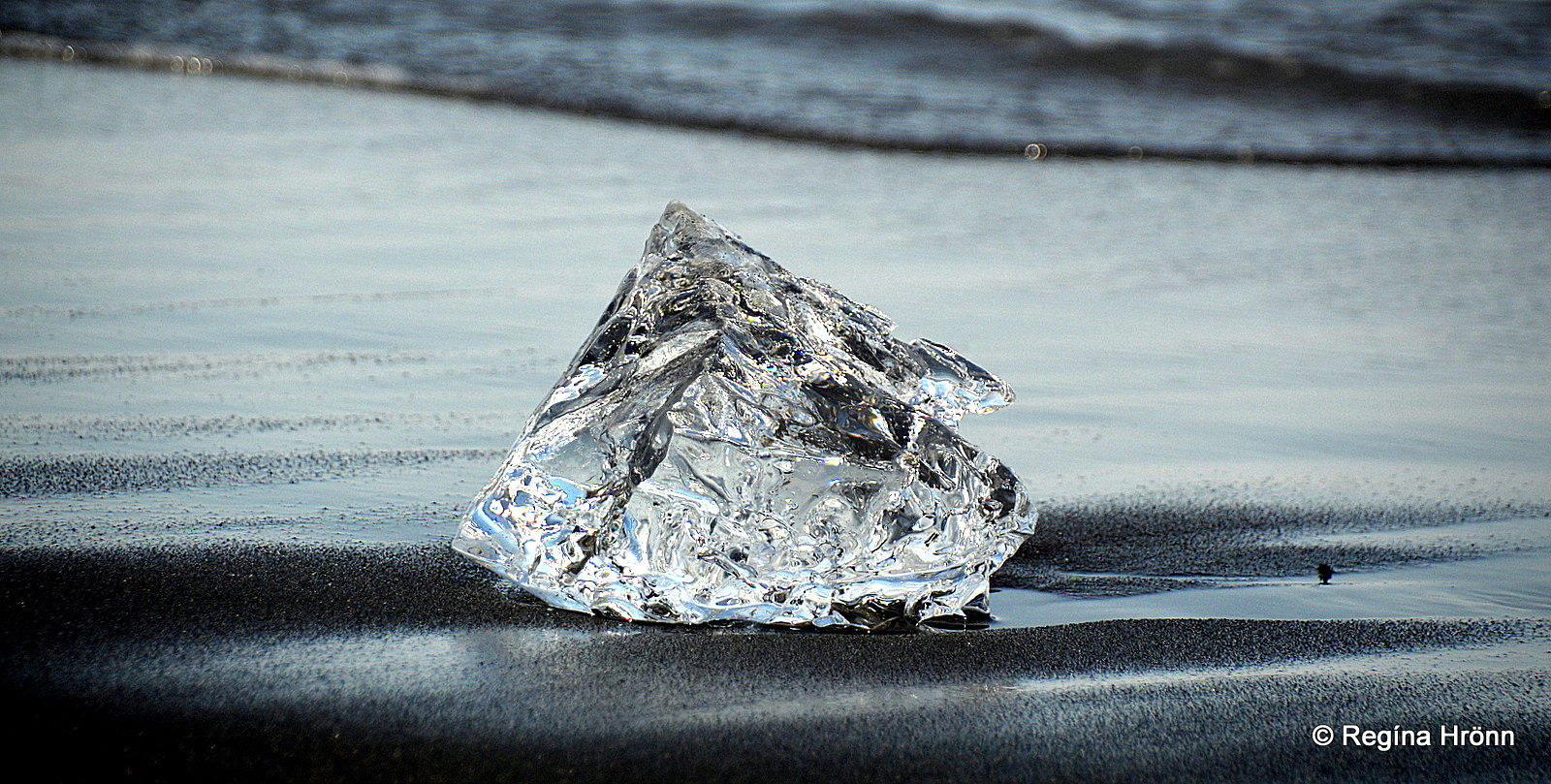 But the real name for this black sand beach is Breiðamerkursandur beach or Eystri- and Vestri-Fellsfjara to be exact, and it should be referred to as such.

We never know what the beach is going to look like when we visit it, sometimes there are only a few small ice chunks on the beach, but sometimes it is filled with large icebergs.

It all depends on how much ice has calved from the glacier and reached the Atlantic ocean.

The beach was filled with icebergs

On one of my visits to East-Iceland, I stopped by the beach in heavy rain as I saw that it was filled with white and blue icebergs. I had never seen anything like this before!

I took a short video of the glistening ice chunks on the black sand during my last visit to Jökulsárlón in 2021. There were only a few chunks of ice on the beach on that occasion.

It was very windy on this day as can be heard in the video.

What I should have been doing though is turn the camera in the other direction as moments later a big whale breached almost right by the seashore!

Our guide told us that he had never seen a whale breaching in this place, so that was a treat for sure. From now on I will always be on the lookout for whales when visiting this area.

Jökulsárlón glacial lagoon is located in southeast Iceland right by ring-road 1 and is thus very accessible.

The distance from the center of Reykjavík to Jökulsárlón glacial lagoon is approximately 380 km (236 miles).

And the closest town is 80 km (49 miles) away, Höfn in Hornafjörður. 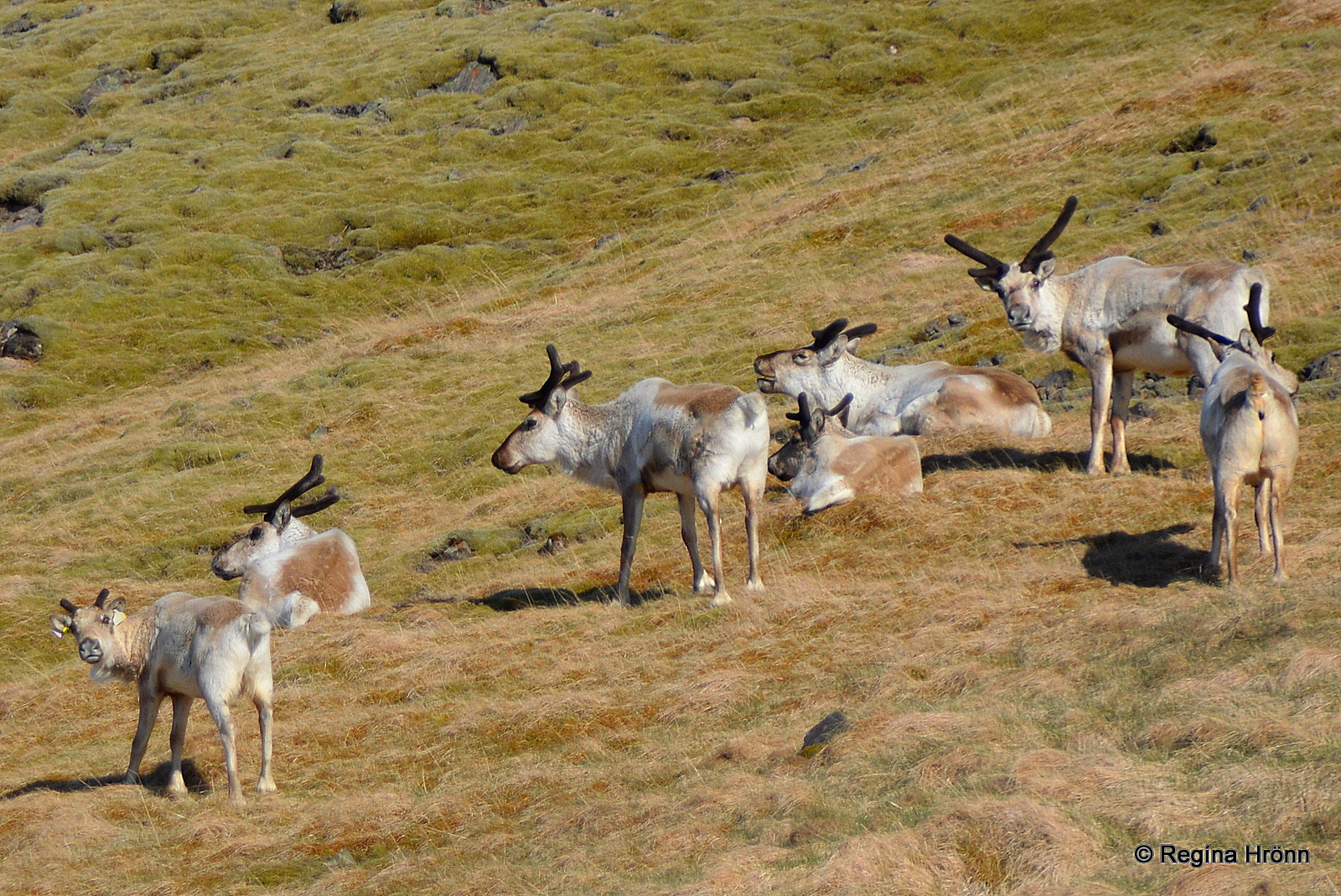 When you travel further east be on the lookout for reindeer, which can only be seen in East-Iceland. I took this photo above last spring very close to the Jökulsárlón glacial lagoon.

Have a lovely time at Jökulsárlón glacial lagoon 🙂